Unlocked by: Automatically after completing the main quest Into the Depths.

It's the last part of the main quest. It will start after the crisis in Memovira's Fortress ends and you meet with Ghostly Woman in the Calm. It is divided into several phases but you don't need to complete all of them in 100% to reach the finale. 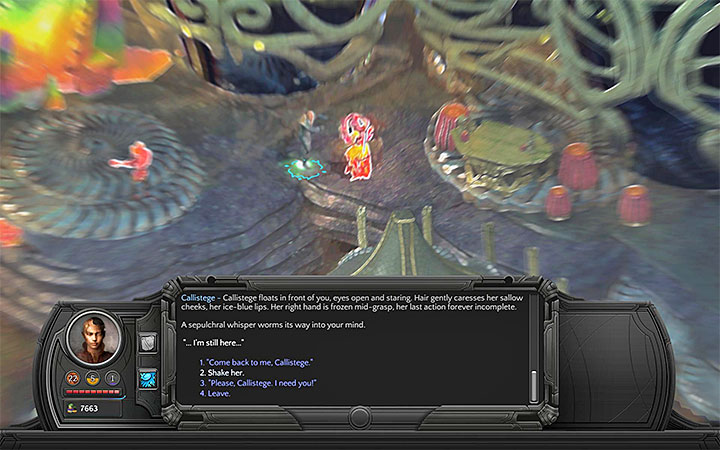 You will find your party members in smaller Fathoms

As you've probably noticed, you have "lost" your companions after you were taken to Calm. The party members are also somewher in the illusion of the Labyrinth. Finding them isn't mandatory. You can get to the finale on your own if you want. If you plan to make the companions rejoin you, you can find them in the optional Fantoms to which you can get by using the portals located in various parts of the Calm. After finding each character you must additionally release him or her from illusion through a conversation. Below you will find a list of places where you can find your party members:

Important - you will receive 40 exp for each companion that rejoins you.

Important - in addition to the lost party members, you can also find other characters in the additional Fantoms. These will be selected, more important NPCs who died during the game.

Passage through the Endless Battle Fathom 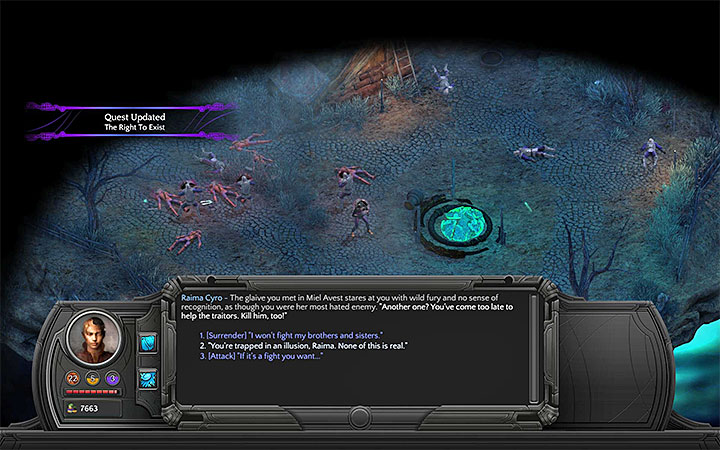 You can act in three ways during the meeting with Raima

You can reach Endless Battle Fathom (M26.1) by using the portal in The Calm (the one located closest to the place where the quest starts). In the location you might be forced to participate in three crises. The first one is meeting with Raima (M26.2). Here you can act in one of the three ways:

If the further part of Raima crisis is triggered, you can finish it by defeating all enemies or by destroying the crystals on the right side. You can do it by using Smashing on the crystals twice. 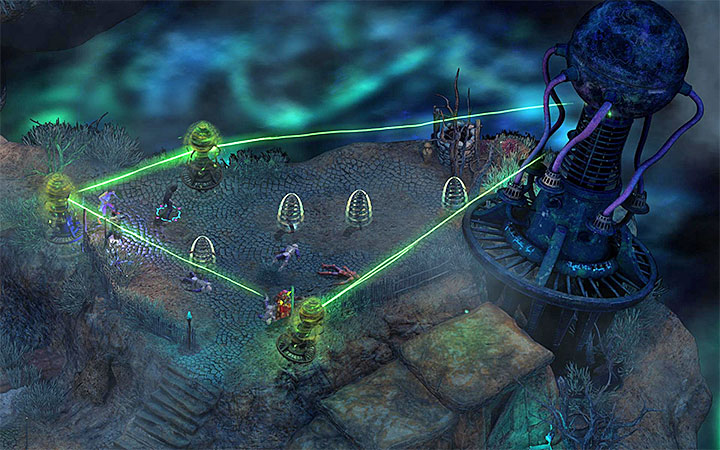 You can imprison the enemies by activating the pylons

The second crisis in the Endless Battle Fathom is related to the encounter with Andronus Sandhand (M26.3). This encounter is similar to the previous one. Once the crisis begins, you can attempt to free Andronus from the illusion by using Tidal Affinity, Persuasion or Smashing.

The crisis ends when you either kill or imprison all your enemies. If you prefer the second option, then you must activate the three nearby pylons, preferably without much delay. The easiest way to do it is by positioning one party member at each pylon and using action when it is their turn. 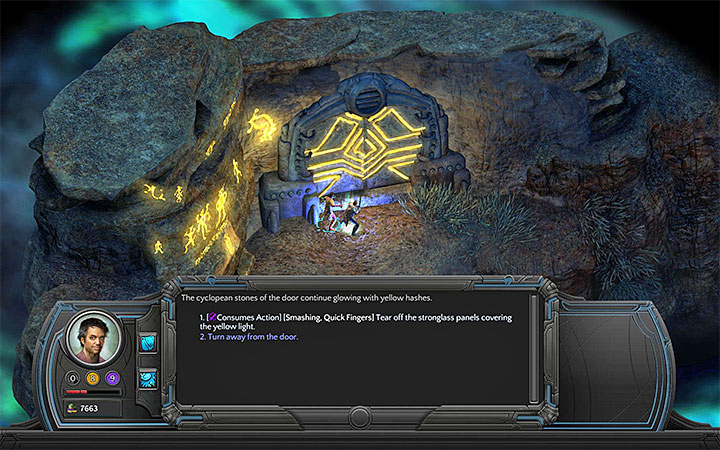 Defeat the enemies or quickly unlock the entrance to the cave

The last crisis in the location is related to Paj Rekken and Chalcedon (M26.4). In this case you won't be able to talk to Paj Rekken. You must decide whether you want to defeat all opponents in combat or focus on reaching the cave entrance and opening it (M26.5).

You must unlock the passage to the cave no matter how you behaved. It forces you to use one of the new skills. You will be taken to First's Fathom and you will obtain 100 EXP. 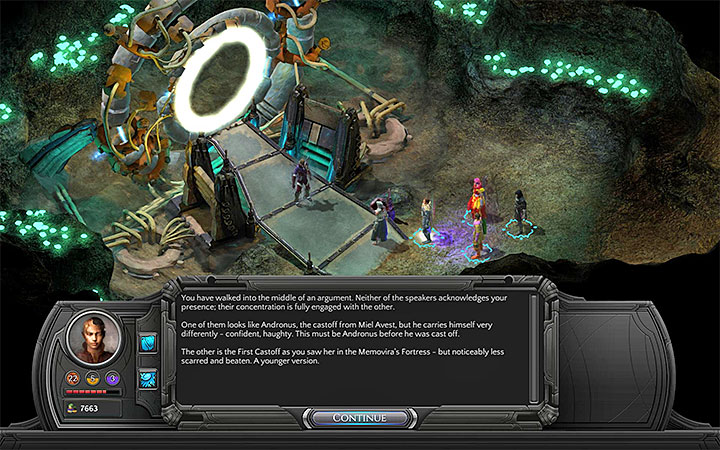 Speak to the First Castoff and the Changing God

First's Fathom is a small location in which you won't spend too much time. Here you will encounter First Castoff and the Changing God. You won't have to fight with any of them. Use all dialogue options and you will receive 100 EXP. A portal near Changing God's machine will be unlocked. It will take you to the Broken Fathom (M26.6).

Passing through the Broken Fathom 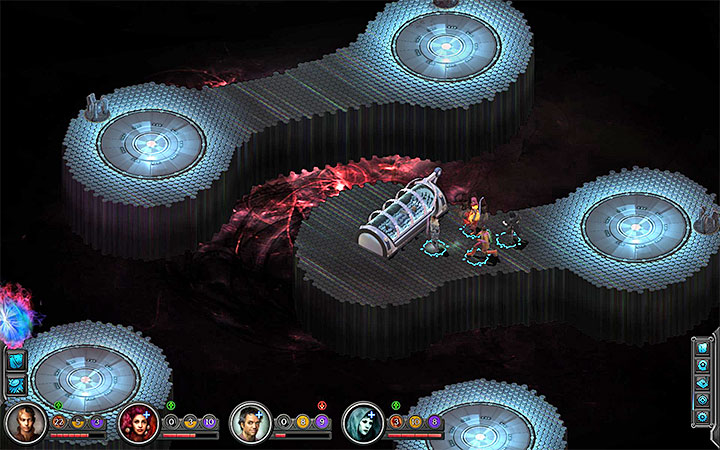 Solving the riddle will enable you to reach the Stasis Chamber

In Broken Fathom you must solve a riddle related to reaching the Stasis Chamber (M26.7). You must interact with the five nearby control panels. Below is a list of steps required to reach the chamber:

3) Walk to panel 3 (M26.11) and select the first option from the list - pressing the blinking picture with a human drawing. All panels should become highlighted.

5) Interact with panel 2 and select the second option - pressing the button with human drawing. A clone of the main character will appear.

6) Speak to the clone, use all dialogue options and ask him for favor. The clone will walk to panel 3 and use it.

7) Clone's action will lead to the appearance of a passage to the Stasis Chamber. 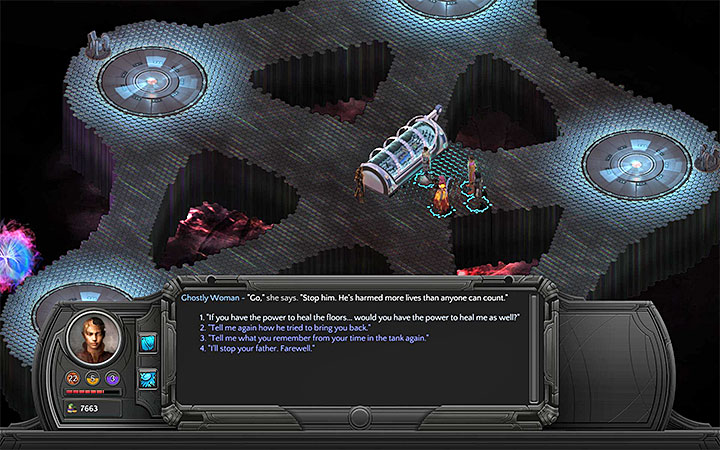 Opening the door to the Resonance in the Deepest Phantom 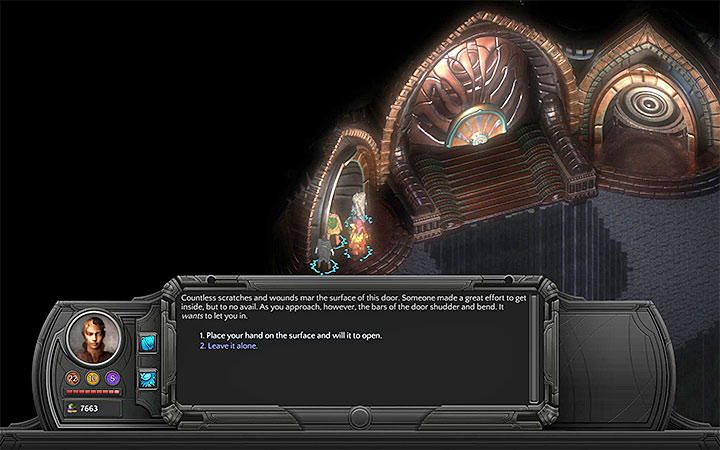 Examine the side door and complete the scenes related to it

In the Deepest Fathom your main objective is to open the door that leads to the Resonance. In order to do it, you must examine the Illuminated Door and Marred Door, left and right of the door leading to the Resonance, (you can reach them in any order you want). In each case, after interacting with a door you will have a gamebook scene to complete. Similarly as in previous such scenes, you don't have to worry about dying or any other negative outcome occurring.

You can complete the scene related to the Illuminated Door by talking about all topics, obtaining the Domination Rod and triggering an encounter with the Sorrow. The scene with the Marred Door can be completed even faster, although it provides you with an opportunity to use many additional skills.

Important - consider saving the game before you examine the second door. After the second gamebook scene one of the final encounters will start. 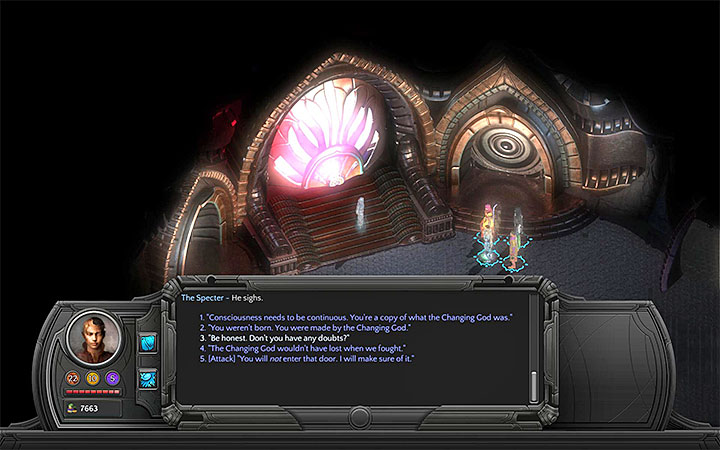 You can complete the encounter without fighting

The Specter will appear after you complete both scenes in Deepest Fathom. The conversation with him can end in one of three ways: 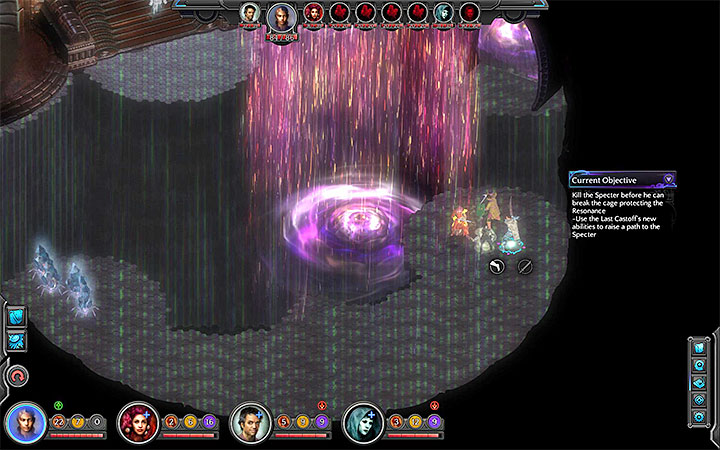 Use Raise Floor to build a path to the Specter

Once you regain control of the party, you will find yourself on the opposite end of the room than the Specter. A fall will separate you. Your task is to kill the Specter before he breaks through the cage that is blocking access to the Resonance. The game will hint you that the protagonist gained two new skills - Raise floor and Lower Floor. The first one is much more important as it enables you to repair the pieces of the ground lowered by the Specter. This will allow you to create a path towards him (use the other skill only for eliminating the weaker monsters described below). 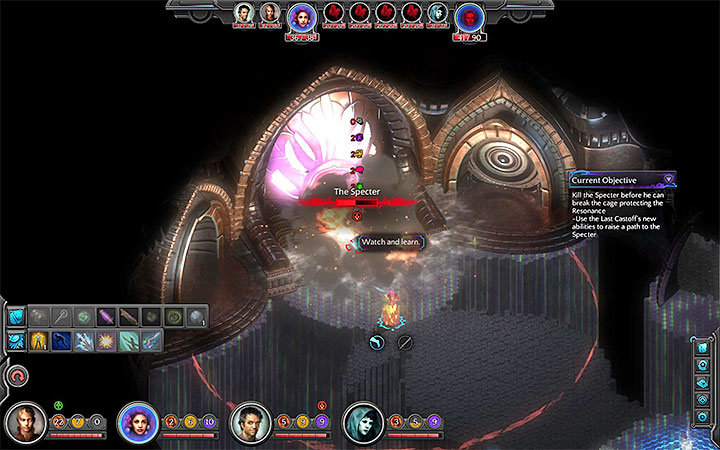 Use your whole party to attack the Specter

Each time you raise the ground, try sending your party members close to the "boss". Try to do it all in one turn, as the Specter will use every chance he gets to destroy the floor again. While the action doesn't kill your companions, it will force you to use the skill again to rebuild the path.

You can use any attacks you want to attack the Specter. Try to mobilize the whole party, as the boss is able to teleport one of your party members someplace else every turn. After being taken back to the southern part of the room, such character must repeat the whole journey to the Specter. Ranged attacks can be very helpful here - they will spare you the trouble of getting to the boss. 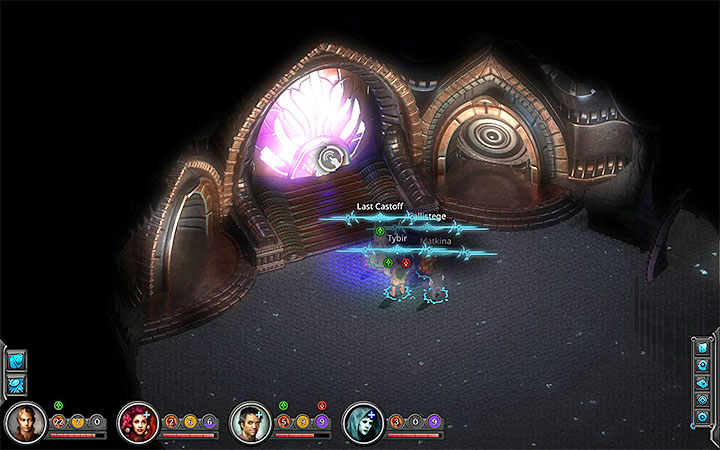 The Specter is not the only opponent in this confrontation. Since the beginning of the battle in the Fathom, you will also face some Crystalvores. If possible, try to ignore these monsters or use ranged attacks against them if you must engage them. Don't waste time on eliminating all of them, as new ones will spawn. The same goes for the Stichuses that might join the fight after a few turns. Keep attacking the Specter until he loses all health points (luckily, he shouldn't be able to regenerate). For winning the fight you will receive 100 EXP.

No matter how you acted, use the passage to the Resonance. There, the final encounter with the Sorrow awaits you. It was described in the Endings chapter.