Torment: Tides of Numenera includes essential information needed to understand game mechanics of the latest game by inXile studio. The guide was divided into two main parts: an in-game guide and a walkthrough. The game guide provides information on the most important elements of the game. A significant amount of details was devoted to game mechanics such as combat system, skill checks and dialogues.

Several chapters were devoted to the complex process of character creation. All the available character classes and additional modifiers describing the main hero were also listed. In addition, a chapter concerning potential companions was prepared. Beginners will find the glossary, which helps to become accustomed with the specific and complex game world, very helpful. 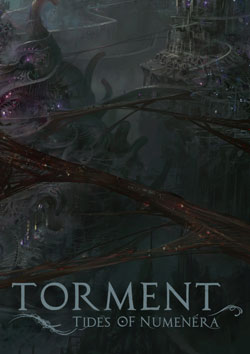 Torment: Tides of Numenera is a role-playing game designed as a spiritual successor to the iconic Planescape: Torment. Product was developed by inXile studio, famous for Wasteland 2. Action is set on Earth in the distant future, billions of years from now and shows the world that combines elements of fantasy and science fiction. Most of our planet's inhabitants live in more or less medieval conditions, but at the same time they are surrounded by remnants of the former, more advanced civilizations. Some of these relics of the past (titular numenera) are useful in transport, communications, and defense. Others, in turn, pose a deadly threat.

The game was implemented with a very extensive system of moral choices reflected by the so-called Waves that affect the world around us, statistics of the items we find, or the reactions of NPCs encountered while adventuring. The story will have a predetermined protagonist, but players will be able to choose sex, class, and to freely develop his or her skills.

Combat employs a turn-based system. With the progress of the story our heroes gain experience points, which can be spent to develop their skills.

The game is powered by the Unity graphics engine and the whole game is presented in an isometric view (2D) although it uses also pre-rendered backgrounds.

More About Torment: Tides of Numenera

Torment: Tides of Numenera Unraveled: "It will be a literary experience that will require some thought to fully enjoy"

We talked with Torment: Tides of Numenera developers, and got answers to the most nagging questions about the mechanics, combat, story, and character progression in the spiritual successor of the cult Planescape: Torment.