How to unlock: Automatically after the completion of prologue and arriving at The Broken Dome (M1.1). 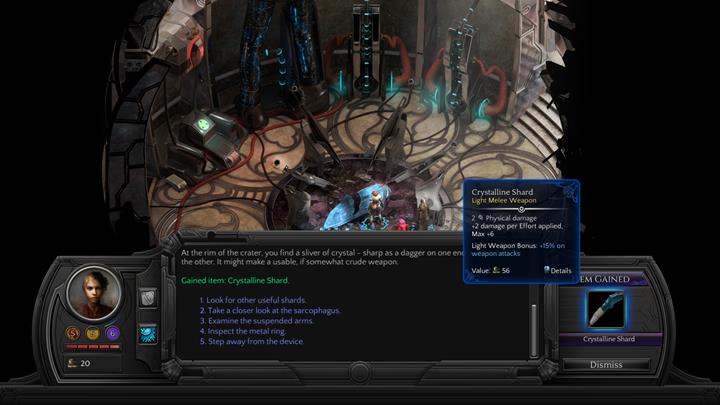 Talk to the companions and search the chamber-you can pick up one of the shards, among other things, from the ground.

After you've created your character and completed the prologue, you arrive at a small location- The Broken Dome (M1.1). Two new heroes, Aligern and Callistege, will approach you. The conversation has little meaning to the story, but it's worth it to "click" all the options. By doing so, you will learn that in order to advance the story, you have to repair the resonance chamber in the location where you are at the moment. To do it, you need help of a local organization-either the Cult of the Changing God or the Order of Truth. 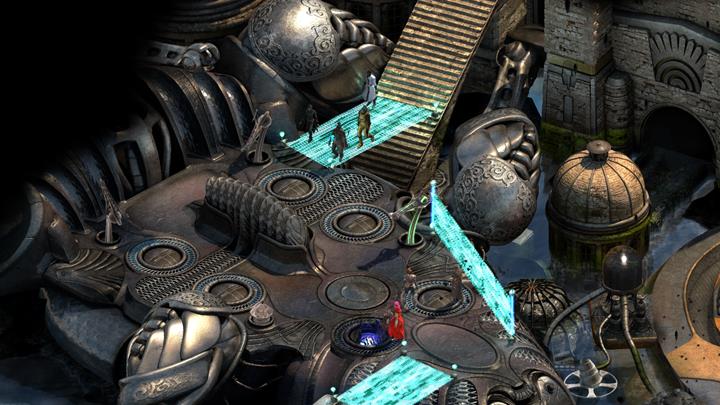 The approaching group is a telltale sign of danger.

Outside, Aligern wants to speak with you-you will learn of the threat of staying in this place. Run up the stairs and pass the energy bridge. When you move forward (M2.2), a group of strangers will approach you. You can deal with them in two ways: peacefully or violently.

Conversation with Qorro - the violent way 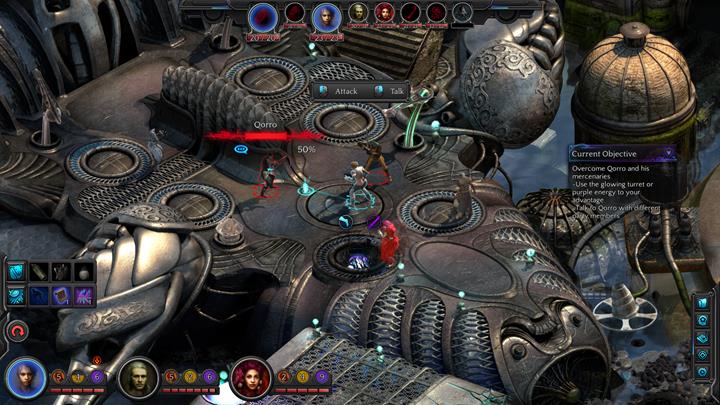 Your main goal is to defeat Qorro-you can use the environment to make the fight easier.

If you want to solve this forcibly, be gruff, order Qorro to stand aside, and then attack him, which will start a crisis.

During the fight, you have several additional options:

Focus only on the group's leader-when he's defeated, the others will run away (not instantly, it might take a moment). Once you defeat Qorro, approach his corpse and disarm the trap mechanism with the interaction method of your choosing. After the fight, you will receive 100 XP and some items (examine the bodies of the dead). 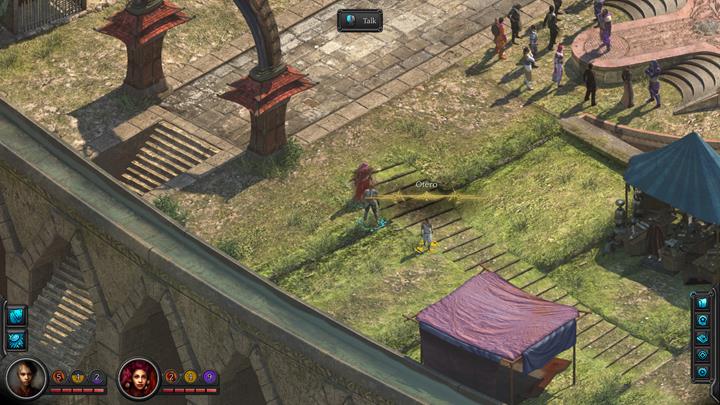 Talk to Otero and ask about the area.

Once this is over, your companions will have an argument, and you will have to choose whom to take with you. This is not a definite, irreversible choice - the companion that leaves can be recruited again at their workplace (Aligern in the Underbelly, and Callistege at the Order the Truth). Run up the hill from which the defeated group came. In the new location, talk to Otero who is standing right at the point of your entrance (M3.1). In conversation, you can ask about the location of the organizations that you seek, which will update the journal of the Fallen to Earth quest.

Moreover, Otero will also tell you who can help you repair the device (Resonance Chamber) in The Broken Dome. These are: Prata, southwest from your current position (M3.13), and Master Foreman in Underbelly.

Conversation with Qorro - the peaceful way 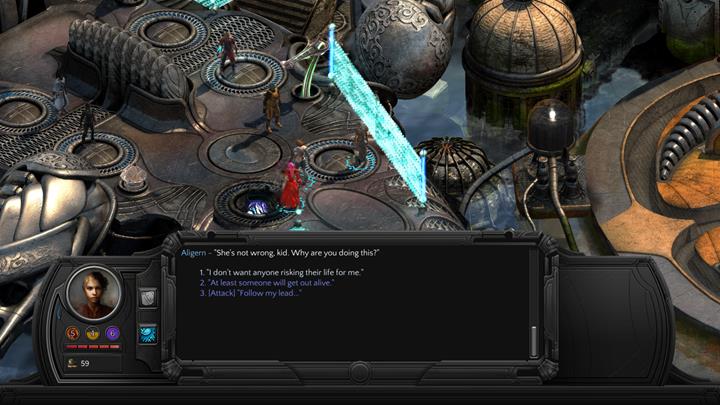 Be humble while talking-tell the truth and surrender willingly.

If you want a peaceful solution, answer sincerely that it was your character that fell from the sky and then go with the group to their employers, which will grant you 25 XP. Combat will not happen, and your party, save for Aligern, will be taken to the headquarters of the Order of Truth (M8.1). Attention: There is a possibility to out-talk Qorro completely. After the lost discussion, Qorro will withdraw with his group without a fight, and you will remain in the Reef of the Fallen World. 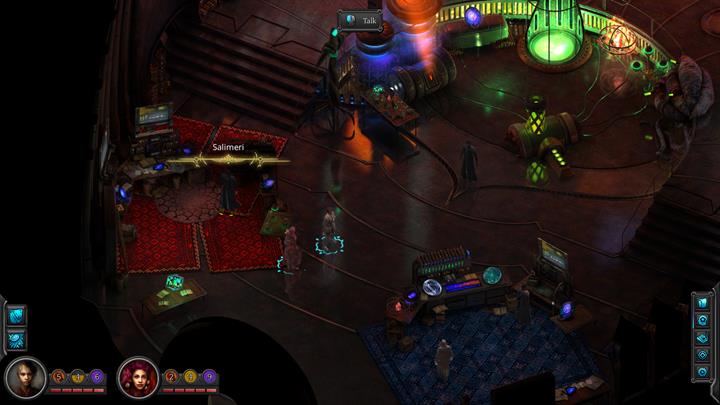 While stunned, you will be taken to the Order of Truth-talk to the group's leader.

There is a quite long conversation with a local leader, Salimeri, ahead of you. Dialogue option choice is of little importance, but when the character asks you if you want to help her, agree. You will unlock a new side quest, The Anechoic Lazaret (the quest can also be unlocked while taking the violent path but you have to visit Salimeri on your own), and you will receive a new item: Metallic Eye. The further stage of the conversation has little meaning, but if you ask Salimeri about several issues, you can receive an update for the Fallen to Earth quest. 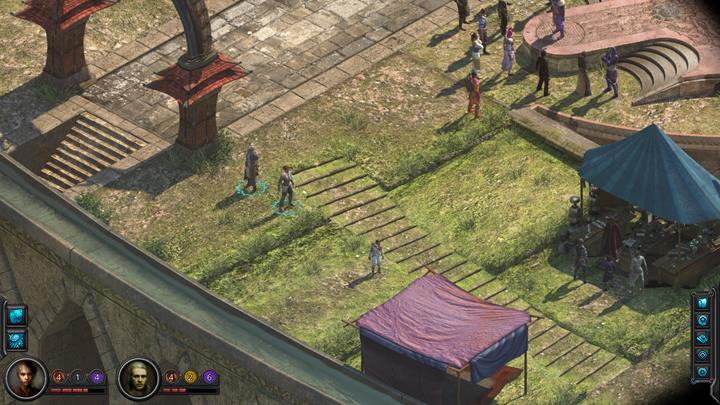 Talk to Otero and ask about the area.

Once you finish talking, you can talk to other characters in this small room but at this moment they have no quests or items to offer. Exit the room, head south, and take the stairs down to the lower part of the town. From there, go south again and you will reach a character who is standing at the arch: Otero (M3.1). While talking, ask about the location of the organizations that you seek, which will update the journal of the Fallen to Earth quest.

Moreover, Otero will also tell you who can help you repair the device (Resonance Chamber) in The Broken Dome. These are: Prata, southwest from your current position (M3.13), and Master Foreman in Underbelly.

Further course of the quest - solving the clock puzzle 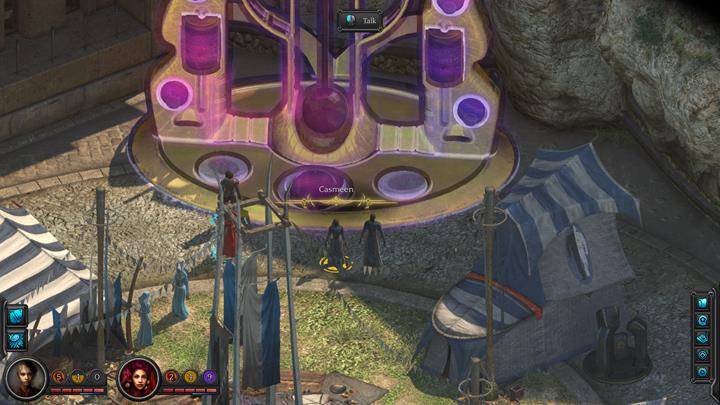 Go to the cultists' leaders and agree to solve the puzzle of the big clock.

Attention: After speaking with Otero, both possible paths intertwine, which makes the further course of this quest the same regardless of the chosen path, whether it's violent or peaceful.

Talking to Prata gives you nothing-you won't' learn anything helpful by completing the quest. Head north to Otero to reach the cultists you seek. While talking to Casmeen (M3.2), a woman standing by the big clock, you will find out that the cultists can help you, but you have to do them a favor first. 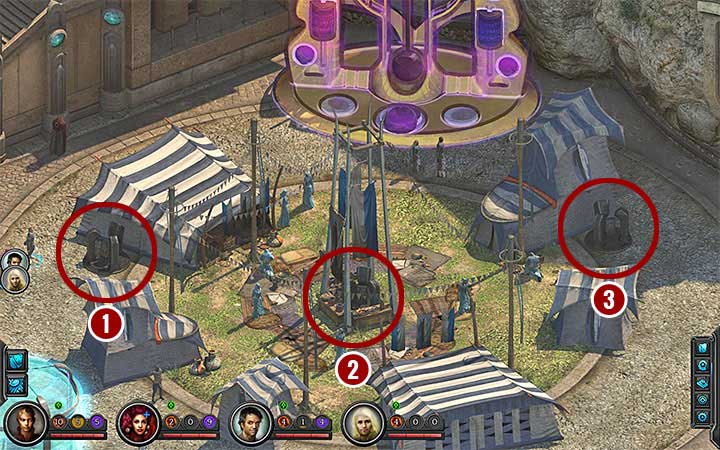 You have to reactivate the clock standing behind the characters you talked to a second ago. Interact with the clock but you won't be able to do much since you have to activate three subsequent objects by choosing the right dialogue options.

Once it's done, the clock will be active again and you will receive 3 XP. Go the clock, which will take you to a completely different place. 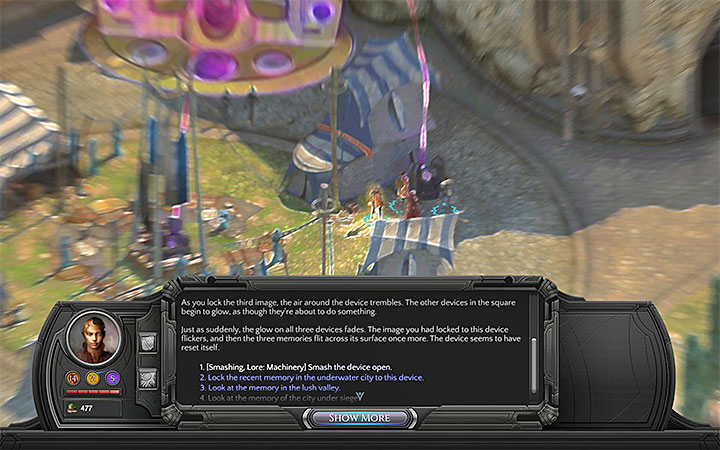 Use Smashing on one of the devices

Also, there is an alternative solution - the riddle with the clock can be led to a point where the clock malfunctions and teleports the party to another timeline. Interestingly enough, it is not a completely unattractive variant, as taking this direction will unlock an additional way of completing Baleazar and the Beast (more details can be found in the section on the said quest). To "damage" the clock, choose the memories from the underwater city on all three objects, and use Smashing on one of the devices. This will lead to a timeline change - Circus Minor will be surrounded by the night. 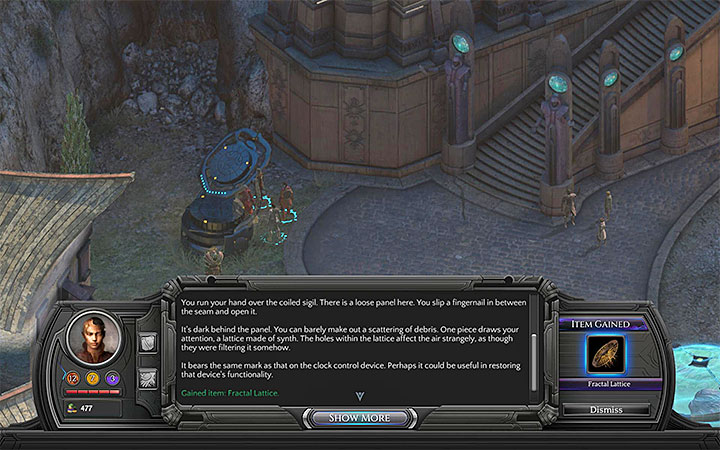 Find the Fractal Lattice to return to the normal timeline

The Calm - Dealing with your memories 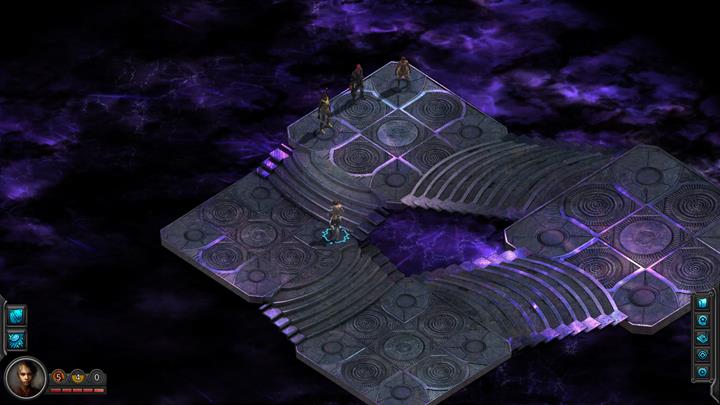 Regardless of your standing with the clock you'll arrive at a mysterious place where you encounter three new characters: Kamose, Diviaticu, and Villon. Talk to them and use all dialogue paths to learn how to escape this location. When you reach deep into your memories, you get 100 XP which lets you level your character up. Now you have to choose a specialization and select new skills. 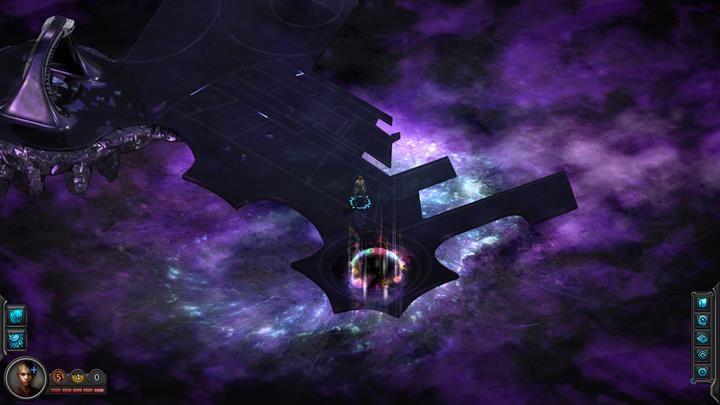 You get to a labyrinth-a manifestation of the protagonist's mind.

Once done, a portal leading outside will appear-go inside. Alas, The Sorrow will appear and make it impossible for you to escape. You will wake up in a familiar place. Talk to The Specter who will explain the current situation. You are in the room where you fought The Sorrow for the first time-it symbolizes the protagonist's mind, and it's going to expand significantly over time. For now, use the next portal to the south and go back to the real world.

Talk to the cult's leaders which will complete the Fallen to Earth quest (+100 XP) and start a new one: The Cold, Calculating Jack.