The first part of this mission is going to be fairly easy, however it's going to get much tougher later on. I'm sure that you'll have a lot of problems with the ending. You will have to remember about a lot of important things. Your task will be to defend a specific object against a massive enemy attack. As a result, you will probably have to repeat this section at least a few times in order to find out how all of this works.

We'll start off in a very similar corridor (#1). That's where the previous mission of this chapter has ended. You could take a look at the video feed, however this won't be necessary. Start moving towards your first target. You shouldn't encounter any enemy units here. Once you've reached a much larger area, you will have to get closer to a double door (#2). It should be located in front of you, so you won't have to waste time here.

You will have to use a Snake Cam (#1). As you've probably noticed, two enemy soldiers are standing here. You won't have to tag them, because we'll use an explosive charge here. Proceed with the assault. Your task will be to help your teammates to secure this area (#2). Once you've taken out the first group of enemy soldiers, order your men to GO BACK to the previous corridor. We've had to deal with a similar problem before. Doing this will allow you to avoid being attacked from two different directions. Your team should be standing in a large hall. Some of the terrorists may actually try to leave the large room. Take them out quickly.

Your teammates will start shooting at the remaining enemy soldiers. Leave them here and go back to the lower level. Once you're there, head on to the left staircase (#1). The objective here will be to surprise enemy soldiers from the left flank. You shouldn't have any problems doing that (#2), however it would be wise to use tactical map here.

The last group of enemy soldiers will be hiding on the lower floor (#1). Thankfully, you should be able to secure the upper balconies, so you won't have any problems taking these guys out. Once they're gone, proceed to the lower floor and head on to a secured room. Make sure that the rest of the team is following your lead. You should be able to find an equipment crate here (#2). It's very important that you take two powerful assault rifles with you. Additionally, choose frag and incendiary grenades. You're going to need these objects in a short while.

Proceed to the next section. I would recommend choosing a nearby staircase that should be located on your left (#1). You will have to reach an upper floor. The game should create an autosave here. You will come across two enemy soldiers. They are talking to each other, so you should be able to surprise them (#2). Choose longer bursts in order to kill them quickly.

I would recommend using your tactical map here, so you'll know exactly where you're going (#1). As you've probably noticed, you are getting closer to a much larger area. There are a lot of balconies here and you're going to have to secure them. Start off by moving forward. Use the stairs to reach the upper level. Once you've reached an opening (#2), hide behind the left wall and use your scope to take out a single sniper. Once he's gone, enter the balcony area. There are some terrorists here, so you will have to be careful.

You should be able to find a second staircase here. Make sure that you're occupying the highest floor. Order your men to proceed to one of the balconies. They will start shooting at the visible enemy soldiers (#1). Be careful, though. One of the terrorists may be guarding the staircase. If he decides to attack your team, you will have to kill him (#2).

I would recommend choosing of the central balconies. You will have to help your teammates to get rid of the remaining enemy units. The terrorists will be occupying the ground floor, so you shouldn't have any problems finding them. One of them will be standing near a computer (#1). Once he's gone, take care of the rest of them (#2). Thankfully, there are only a few soldiers here.

Order your squad members to proceed to the ground floor (#1). I wouldn't recommend joining them. Stay here. A large group of enemy soldiers will arrive here. Thankfully, you will be able to kill all of them from here (#2). Just make sure that you do this quickly, so none of your teammates gets hurt.

Once you've secured this entire area, use the stairs and rejoin with the rest of the squad. Head on to a small corridor (#1). It leads to the stage. You will come across a barricaded door. As a result, you will have to move on to a second door (#2). Use the camera and tag a single opponent. Open the door and kill him. It would be wise to use a scope here.

Order your men to move forward (#1). A second enemy soldiers should enter this room, however your teammates will be able to handle this problem. MAKE A STOP HERE! It's very important that you listen to what I have to say. There's a single door leading to the stage area (#2), however you won't be able to go there right away. One of the terrorists is hiding nearby and you will have to kill him in order to secure a safe passage. Sadly, it's going to be a very difficult task.

The terrorist I was talking your about is hiding on your left. If you take a closer look at your tactical map, you should be able to notice that it's a dead end (#1). You could try using a grenade here, however I would recommend leaning out VERY CAREFULLY (#2). Try shooting at his shoulder. It's very important that you don't expose yourself too much. Also, don't even think about sending the rest of the squad here, because that wouldn't change the outcome.

You may proceed towards the stage (#1). As you've probably noticed, the game has created a checkpoint here. You're going to need this autosave, because some of the upcoming fights are going to be VERY difficult. Start off by reloading your weapon and choosing grenades from your inventory. Once you're ready, order one of your teammates to use a nearby computer (#2).

This is going to be one of the most challenging fights of an entire game. Your objective will be to defend against a MASSIVE enemy assault. Before we'll go into details, there are a few VERY important things. I will have to share this information with you:

1) You will have to defeat three waves of enemy units. The second wave is going to be the largest one.

2) You won't be allowed to stall these fights, allowing your team member to hack into the system. It's all based on scripts, so the only way to proceed with the next wave will be to eliminate all enemy soldiers.

3) It'll be very easy to die here. Sadly, you won't be able to avoid some of these deaths, so don't worry if you fail for the first time.

4) You will also lose the mission if the computer gets destroyed. As a result, you will have to prevent the terrorists from doing two things - getting closer and shooting directly at the stage (especially for a longer period of time).

Once you've regained a full control over your other team member, you will have to order him to hide behind the left object (#1). It's going to be a small crate. Head on to the right crate (#2). You should be able to find a machine gun post here, however don't use it just yet.

The first wave is going to be quite simple to defeat. Enemy soldiers will appear on the upper balconies (#1). These objects are located everywhere, so you will have to use your map to find them. Once you've located a terrorist, use your scope to take him down (#2). Make sure that your other team member is also using a cover. Don't use the heavy machine gun!

Once you've dealt with the first group, more enemy soldiers will appear on the map (#1). That's when it gets A LOT tougher. You will have to wait for some of the terrorists to get closer to the stage. After that, throw a couple of grenades at them (#2). Start off by using frag grenades, mostly because incendiary grenades aren't that powerful. The most important thing here is to prevent the terrorists from destroying the stage computer. You will also have to watch out for additional snipers. Try taking out at least one of them.

You should notice falling parts of the roof. I'm sure that you know exactly what this means. More enemy soldiers will use the ropes to reach this area (#1). This is the beginning of the third wave. I would strongly recommend throwing all of the remaining grenades at the terrorists. Once this is done, use the machine gun post (#2). Try shooting without any stops or reloads. Sadly, you won't be able to stay here for too long, because you're a very easy target. If you're lucky, you should be able to kill most of the terrorists. Hide behind the cover and use the scope to take care of the rest.

Notice that completing this objective won't result in creating a new autosave. As a result, you will have to be very careful from now on. There's only one more task here. You will have to reach an extraction zone. Start off by moving towards a nearby ladder (#1). Once you've reached a small balcony, kill a single terrorist that should appear in front of you (#2). Go there now.

Keep moving forward. You will come across a second terrorist very soon (#1). He is standing near the door, so you will have to be ready for his attack. Start moving towards a staircase. There's one more enemy soldier for you to kill (#2). Once he's gone, proceed to the highest level. You will have to reach the roof of this building.

Once you've reached your target area, you will have to open a door. After that, start moving towards an allied gunship (#1). Listen to a short conversation. This is where this chapter will end. 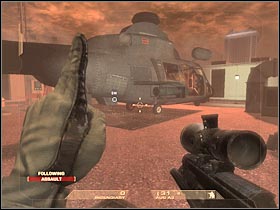