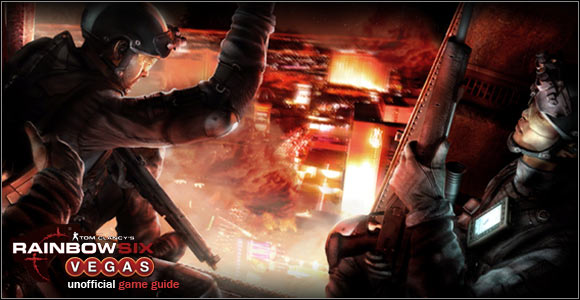 Welcome to the unofficial guide to "Tom Clancy's Rainbow Six Vegas" PC game. This guide consists of a detailed walkthrough of a singleplayer campaign of the game. There are six large chapters for you to conquer. Each of these chapters has about 3-4 separate missions. My guide should provide much needed help for less experienced players. If you had played all "Rainbow Six" games before, you won't have any major problems finishing "Vegas", even on the highest difficulty level. I've described all necessary actions. Most of them are quite obvious, so I won't repeat these instructions later during the game, especially since they are very easy to memorize. Additionally, most of the early levels are easier then the rest. As a result, you'll have plenty of time to test some of these moves, weapons or other gadgets. My guide will also help you to find a most suitable path to a current destination. You will find out about the enemies, especially since each fight will be different from the rest. Previous "Rainbow Six" games required you to save hostage lives from time to time and "Vegas" is no different from the rest. Thankfully, you will be told exactly what has to be done in order to fulfill these tasks without failing your main mission objectives.

I would also like to tell you about a few other important things. First of all, you should notice that there's a new cover function available for you. You should be using covers all the time, especially since there are going to be a lot of them. You will be presented with many opportunities here. Using covers will allow you to aim at your enemies without having to worry about losing any health. You will also have more time to plan your moves. The next important thing involves checkpoint areas. Sadly, you won't be able to save current progress on your own. Instead, you will be dealing with autosaves. An autosave is usually created before a larger fight, so you won't have to worry about repeating a larger portion of the level. "Vegas" is a quite linear game, however you will be able to choose between several different paths from time to time. I've tried my best to show you these locations.

Have fun playing the game and using my guide!