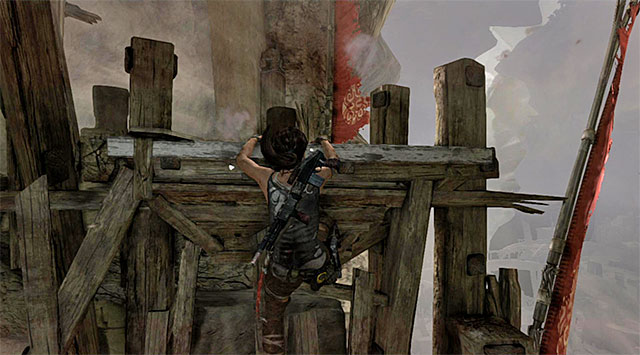 Go left, climbing upper platform. Follow the linear path until you get to the large bridge. When you try to enter the bridge, the game will display a cut-scene, indicating the need of starting the fight with new ancient guards. 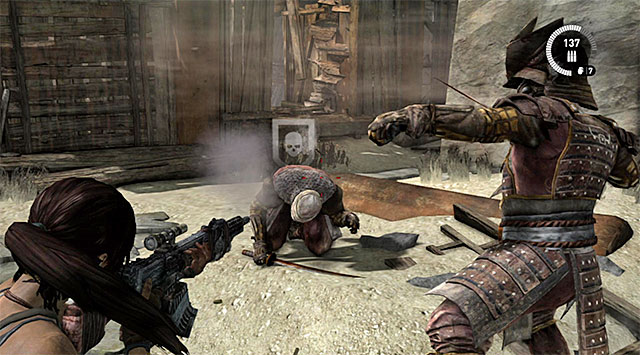 Start walking, being ready to regularly eliminate encountered guards. It is best to use the shotgun or the rifle to defeat them and aim at the explosive objects along your way. 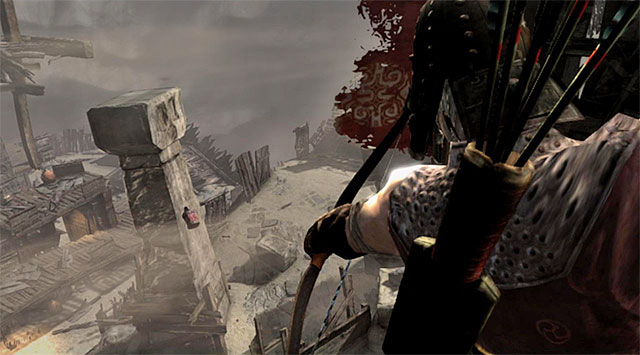 Important information regarding fights here is that you shouldn't stop for a long time in one place, because it might unnecessarily lead to the appearance of new enemies in the area. At first ignore more distant archers, moving smoothly between covers to avoid their attacks. After few moments the game will display the cut-scene, informing about creation of the bridge and appearance of new guards. 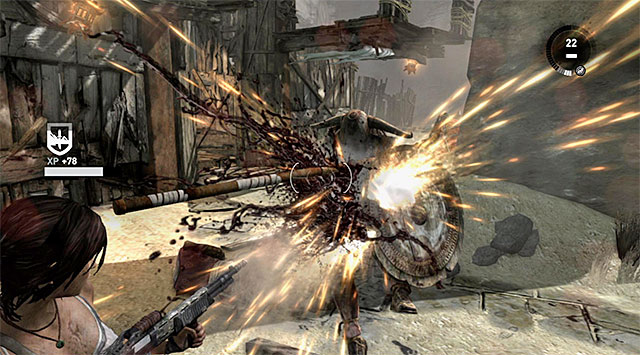 Starting from here you have to also watch out for guards with shields. It is best to act in this case same as with armored opponents from the earlier stages of the game, so dodge their attacks and look for opportunity to use the shotgun on a short distance. 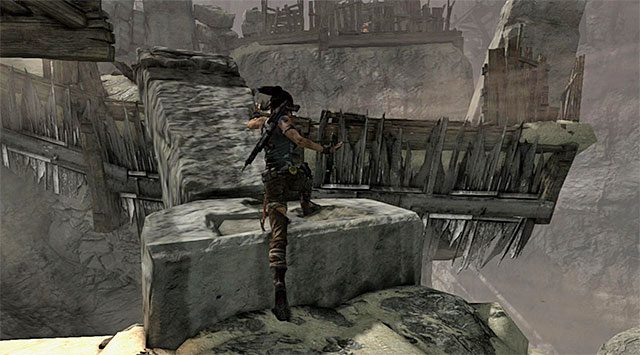 Do not forget of course about picking up ammo crates, but remember also not to slow down your march too much. After eliminating enemies with shields, walk over the bridge which was shown in the last cut-scene (screen). 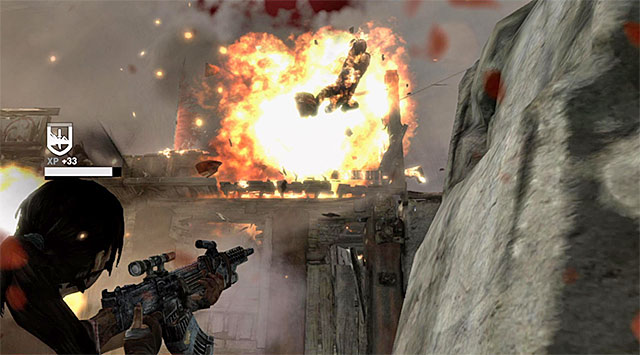 Be ready to fight new guards, also with shields. In this part of the march you can also pay more attention to eliminate archers especially that most of them are standing next to explosive containers (screen). 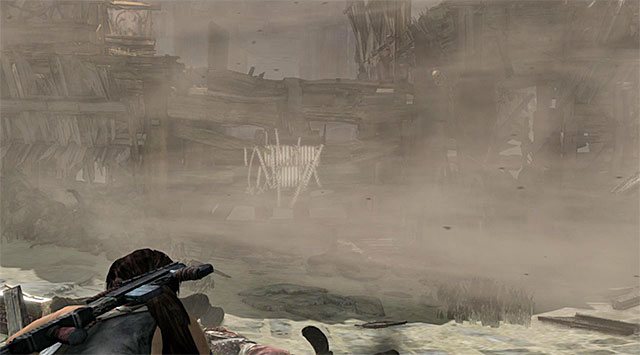 Keep moving forwards, stopping only when Lara is seriously injured. Try to alternatively use the shotgun (short distance) and the rifle (long distance), so you won't quickly use off all ammo for one type of weapon. Eventually you have to reach the barricade shown on the screen and pull it out using the rope arrow. 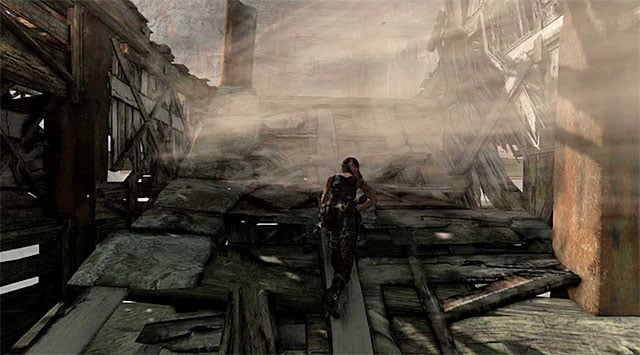 Climb up the ramp and watch the cut-scene showing the encounter with huge guard - fortunately you do not have to fight him now. Enter the new building, thus starting exploration of the location Chasm Shrine. It is worth to stop at the local camp (Sacred Hall) and collect secrets, although it is not mandatory. 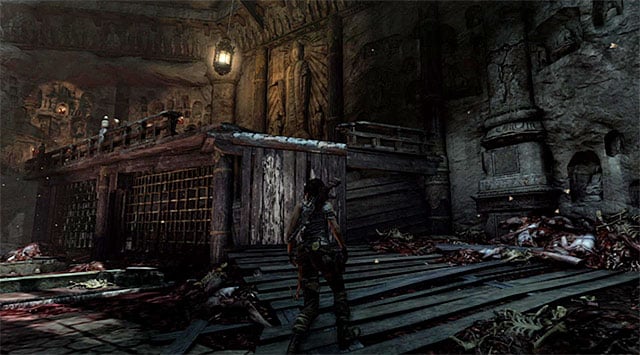 Approach the locked door and open it using the axe. Now you can enter the large chamber, where you have to solve not complicated puzzle. Jump down and head right, reaching a smaller balcony - climb on it. 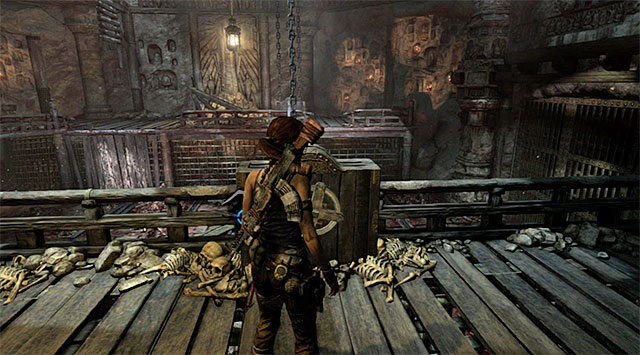 Position yourself at the right mechanism shown on the screen and interact with it, thus making part of the floor to spread out. 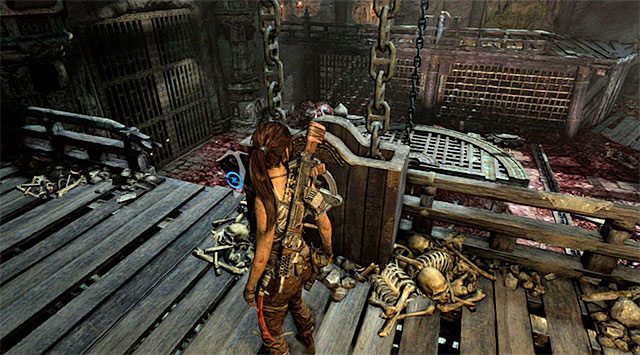 Return to the start point, i.e. to the entrance of the chamber. This time stay on the main balcony and go to the left. Thanks to that you'll get to the left mechanism shown on the screen. After you interact with it, a large cage will be raised. 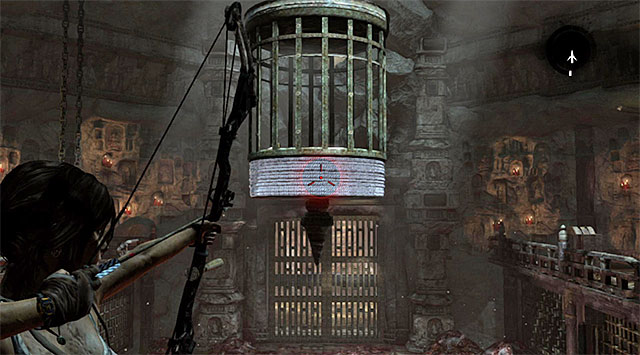 Once again position yourself in the starting place, turning towards the recently raised cage. Use the bow and shoot the rope arrow at the cage, so you can "catch" it (screen). Now start moving the cage, using the rope ascender (hold interaction key/button) to swing the cage in order to destroy the barricade visible in a distance. 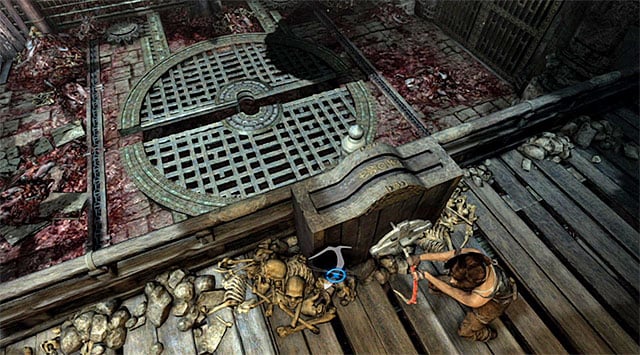 We're already more or less in the middle of solving the puzzle. Again go to the right balcony and use the right mechanism to close the hatch in the floor. 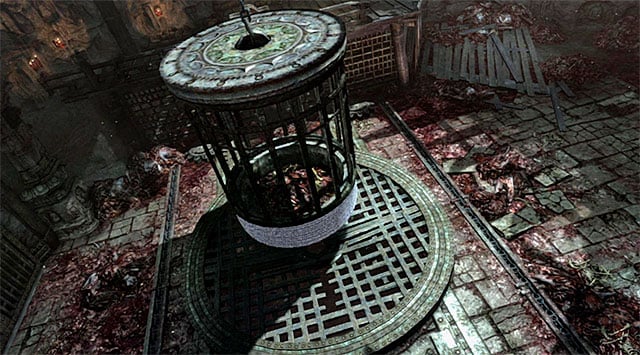 The next step is to use the left mechanism again. Since the hatch is already closed, the cage will stop on the floor, instead of getting down the hole. 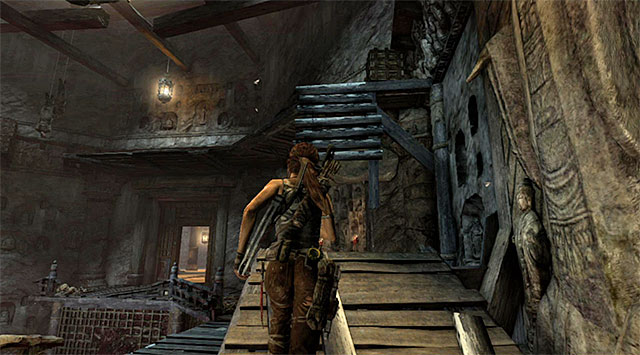 Stay at the left mechanism and turn right. Locate a ladder shown on the screen and catch it while running so you can reach upper balconies. 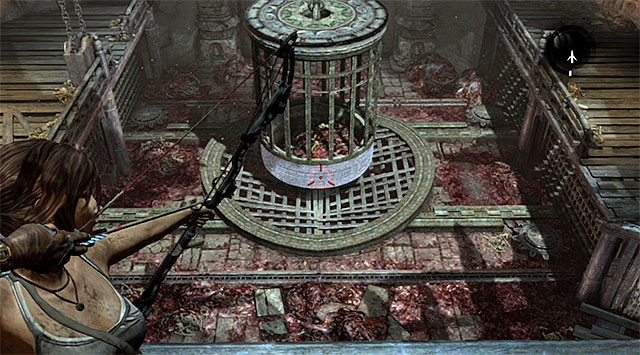 Move ahead and stop more or less over the starting point. Turn towards the interactive cage and aim at it (screen). Again you have to use the rope arrow and the rope ascender to move the cage. 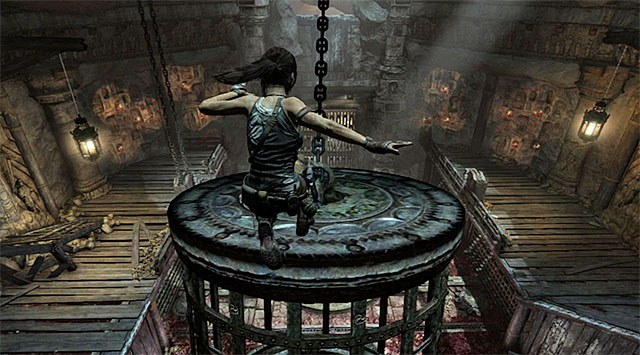 Be ready to action, because when the cage approaches the balcony occupied by you, you'll have to make a jump towards it to safely land on the cage. 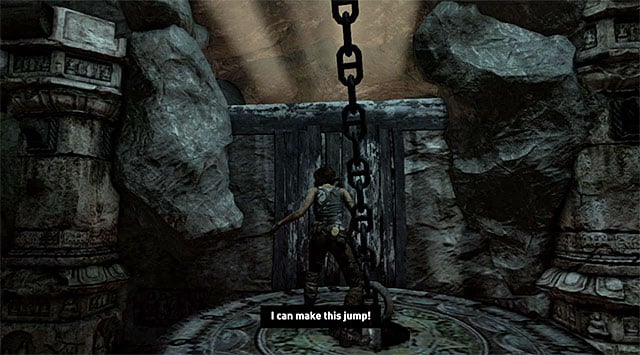 There is one more jump to be performed, this time towards the vertical fragment of the wall, located under previously destroyed barricade. Bounce off that wall in order to get to the upper edge and finally reach the round chamber with statues of Sun Queens. 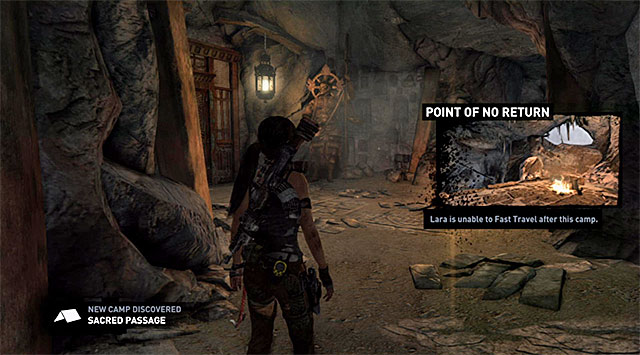 Choose the only available exit from the chamber, i.e. corridor leading east. After a longer march you'll get to the Sacred Passage camp. According to information gave by the game, this is the last camp where you can fast travel, so it is worth to use it. Do not worry if you haven't collected all secrets or haven't explored all optional tombs, because the game will allow you do to all such actions after finishing the main plot.