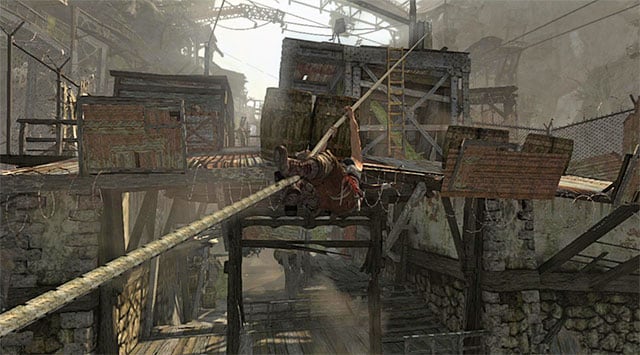 There is a long trek ahead of you. Start by using one of the rope bridges left by enemies, but don't forget to search their bodies first. The areas ahead are filled with collectibles, so have your eyes open. 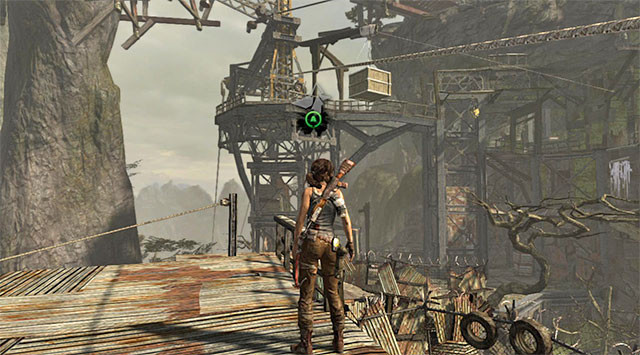 Work your way towards the upper gallery near the cranes to the north-west. You could get there by taking the path below, or a shortcut. Climb to the roof of the closest hut, as seen on the above screenshot. Grab onto the zip-line and head west; you'll reach your destination in a few moments. 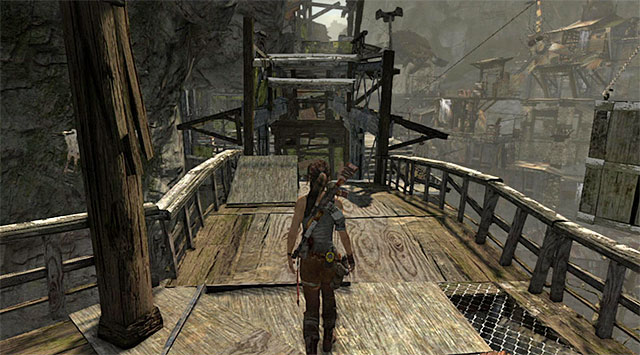 Head north. When you get to the above gallery, work your way to the upper ledges; you can easily ambush the nearby enemies from there. 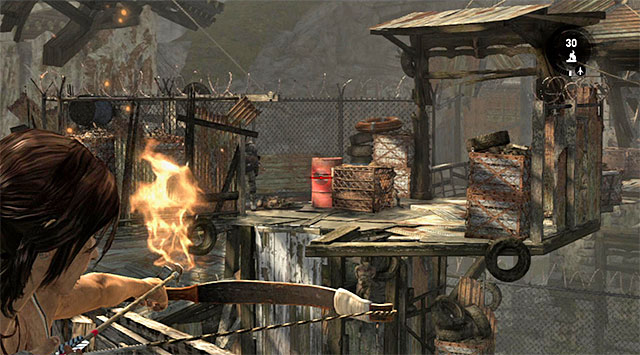 The guards are hiding north-east of here. Commence the battle by detonating an explosive barrel, which should kill at least one enemy. 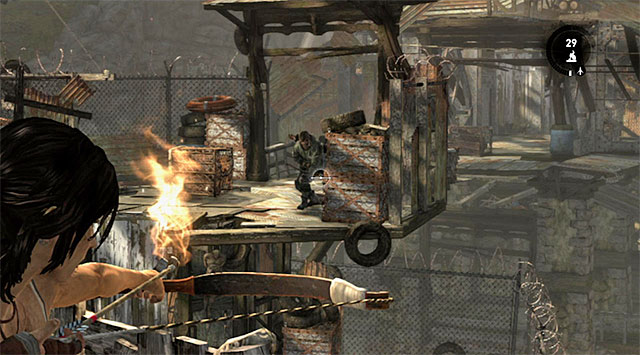 You'll have to fight the rest of the battle the usual way, but keep in mind that one guard will have fire arrows too. As a result, don't get too attached to one cover because it might easily burst into flames and get destroyed. Continue fighting until you've cleared the area. 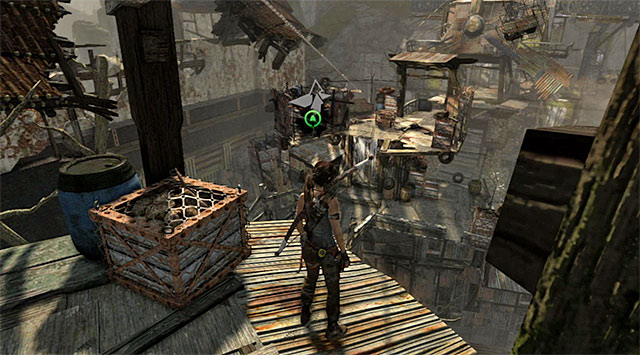 Turn east now, towards the ledge which two guards had just been occupying. The quickest way to get there is by sliding down another zip-line (screenshot). Don't be in too much rush, though, because you might miss some new collectibles. 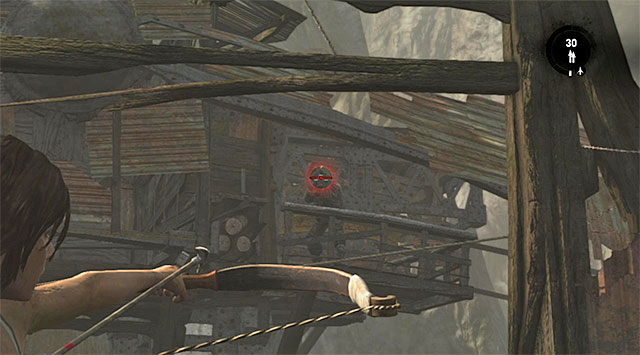 Stay on your guard; as soon as you reach the ledge, new enemies will show up to the east. Keep your distance, but watch out for explosive surprises and the sniper on the right gallery. 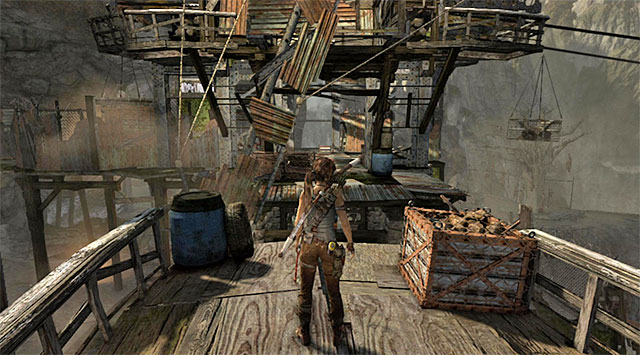 Head east. If you wish to focus solely on finishing the current stage, take a leap towards the ledge in front (screenshot); watch out for the wing of the windmill. If, however, you want to explore the area (which hides a lot of collectibles, as well as the second optional tomb), drop down to have a better look. 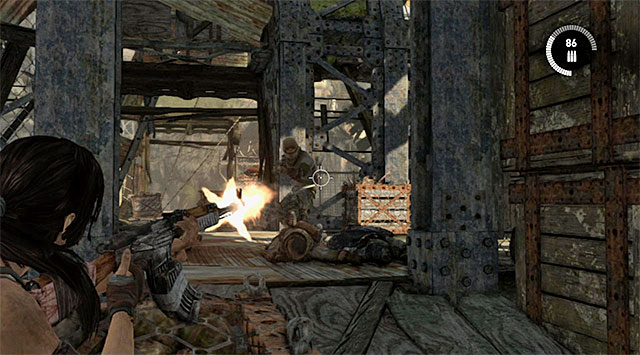 No matter which way you've chosen, as soon as you reach the main floor of the windmill, Lara will be attacked by a new wave of enemies. Given the short distance this time, use firearms and, if needed, the climbing axe (melee combat). Keep an eye on dynamite sticks too. 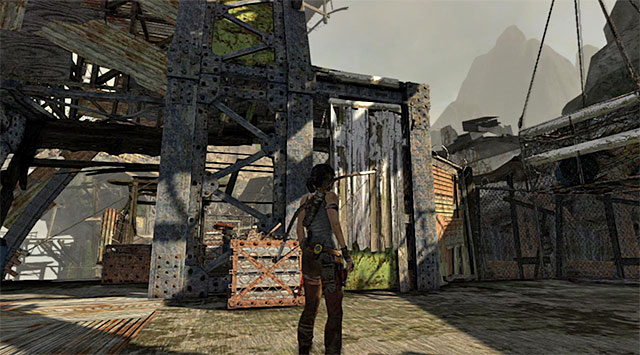 Stay on the main floor and locate a wall Lara can use to get to the higher ledge (screenshot). 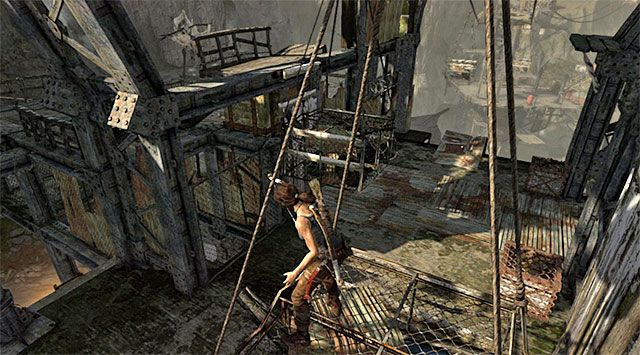 Once there, turn around and wait for a platform to arrive. Leap and land on it (screenshot). It will take you near the tower. On the way, the game will trigger a cut-scene involving Grim warning you about another ambush. 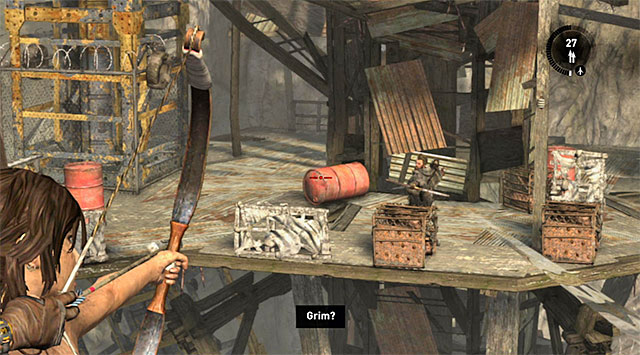 Wait until the platform comes close to the safe ledge and leap over to it. Attack the guards as soon as you can by shooting the explosive barrels. 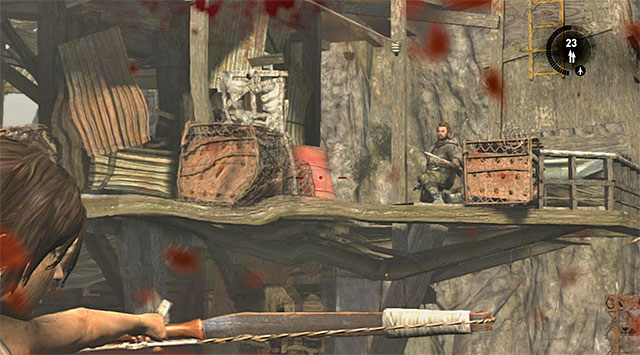 Once you've killed everyone in your line of sight, jump down; only then will new enemies show up. Use covers; the guards will not only shoot, but throw dynamite sticks and Molotov cocktails as well. Choose your targets carefully, and don't forget about taking advantage of the explosive barrels. 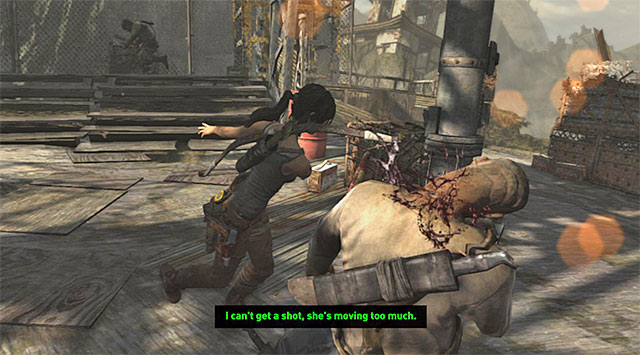 Same as with the previous battles, sooner or later the guards will find their way onto the platform. When they do, act immediately by shooting them or killing them with the climbing axe. Keep fighting until the game triggers another cut-scene, but make sure to replenish your supplies as you go and take covers as soon as Lara receives some heavier damage (reward: 400 XP).