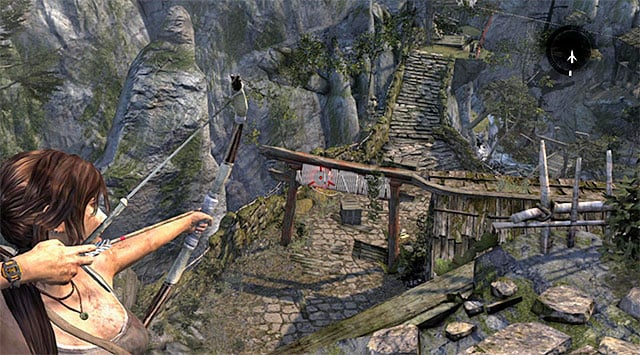 You'll start near the newly unlocked base camp (Village Overlook), where it's a good idea to do some shopping. Notice that since you've acquired the rope arrow, you can now reach previously inaccessible spots within the Mountain Village and find some new collectibles. When you're ready, take the path leading north. Stop at the edge and shoot a rope arrow at the interactive spot indicated on the screenshot. 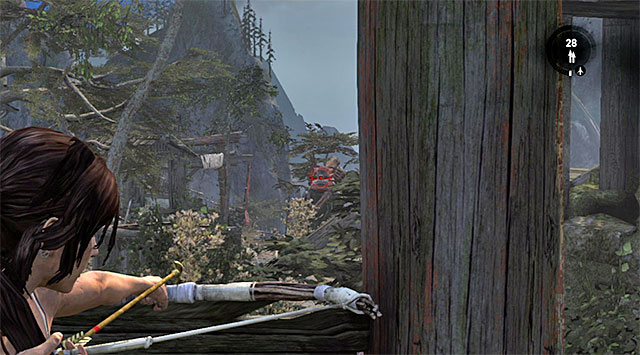 Slide down and immediately take cover; there are four guards ahead. It's best to wait until they separate and take down only the remaining ones. I suggest surprising them with an arrow to the head. 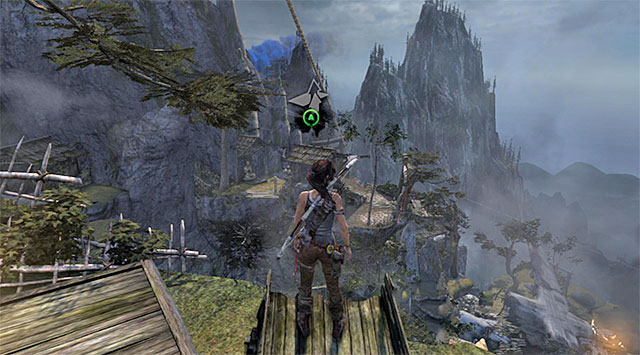 Work your way towards another zip-line, the one used by the guards a while earlier. Reach the mountain path located east of the main village area (you haven't had the chance to explore it either). 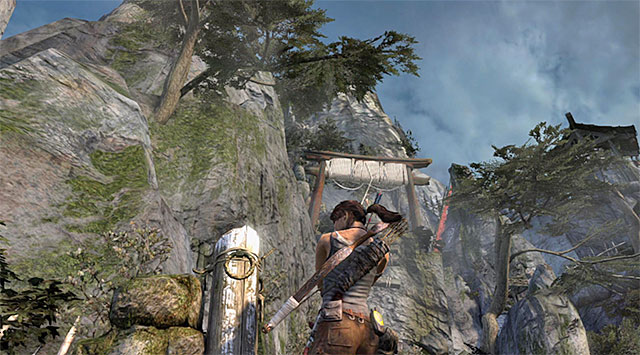 Follow the mountain path north-east until you reach the edge. Shoot a rope arrow to make a rope bridge and use it to get to the ledge above. 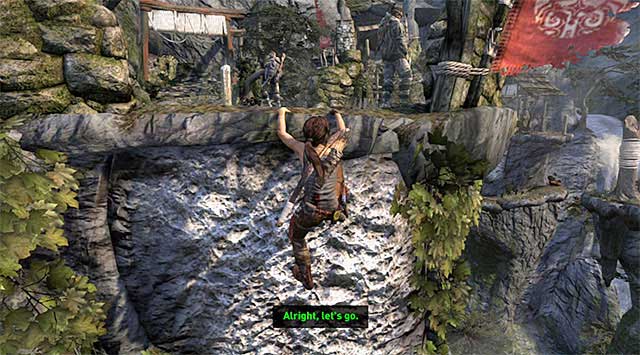 Next in line is a vertical wall; use the slightly forgotten climbing axe to scale it. Don't climb up just yet; there are two guards here. Wait until they go left. If you're planning to search this area thoroughly, stealth kill them. If not, ignore them and go down the main path that will take you to the smoke signal visible from the distance. 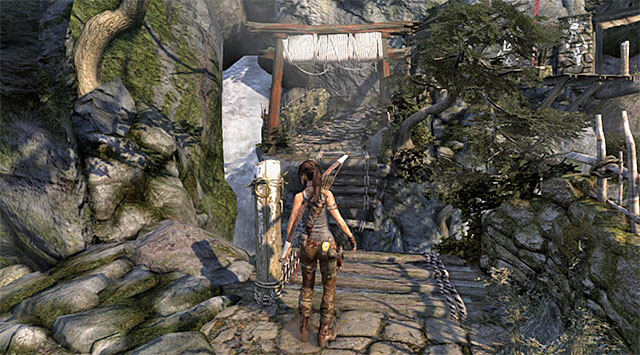 Approach the edge pictured above. Although your main objective is the blue smoke signal left by the pilot, the area ahead is quite open and you can reach your destination in several ways. I strongly recommend checking out every rock ledge for collectibles; there are a lot of them; there's also the second optional tomb (Hall of Ascension). If you wish to focus solely on the task at hand, follow the instructions below. 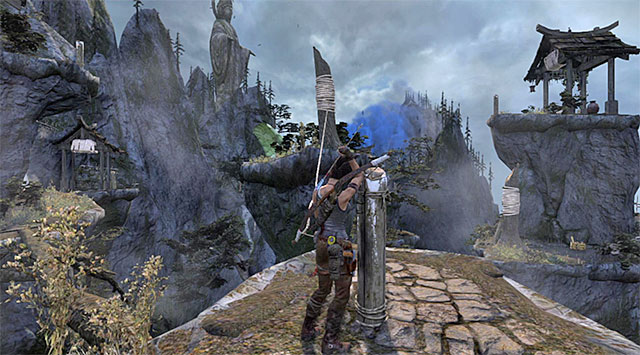 Don't shoot a rope arrow, but drop down to land by a small stream. Head right, towards a beam that could be used for a rope bridge. Aim at the interactive spot pictured above to make it. 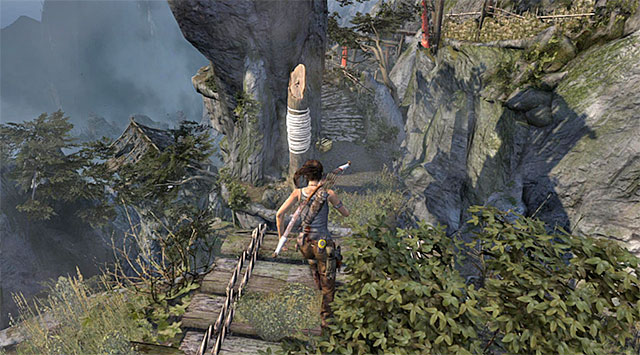 Walk over the line to get to a small ledge. Face the rocks in the south and jump over to the ledge outlined in the distance (screenshot). 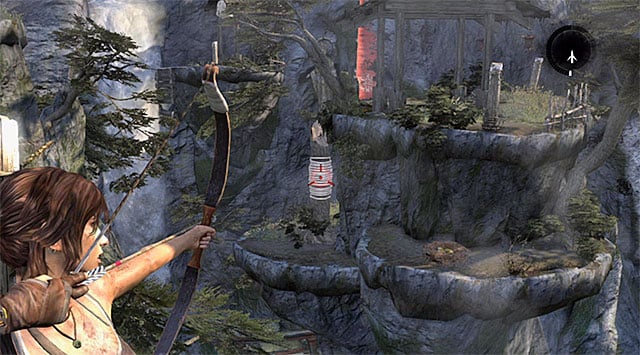 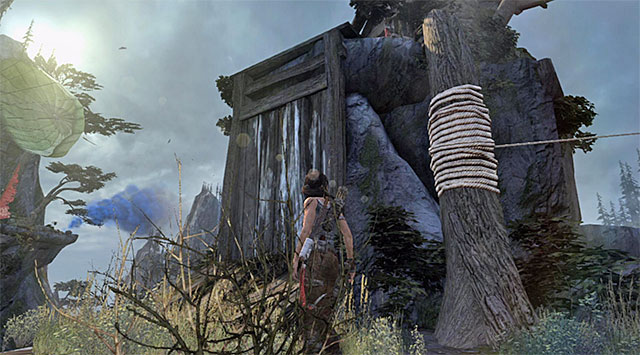 Slide down the line and locate the path that would take you the higher ledge. 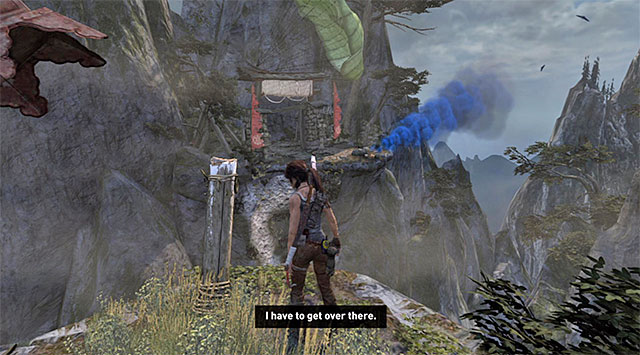 Face the cliff to the east, that's where the pilot has left the smoke signal. Select the bow again and make another rope bridge. 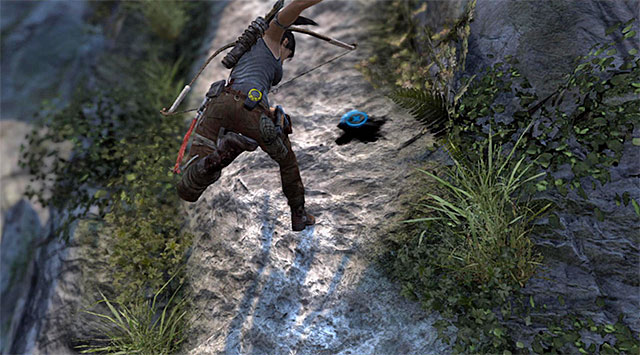 Use the rope bridge. Ignore the strong gusts of wind as you go. Instead, get ready to immediately use the climbing axe (action button) when the rope breaks (screenshot). Finish the ascent to reach the smoke signal (reward: 200 XP).