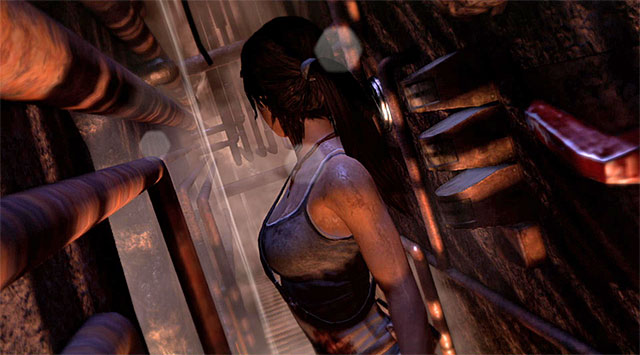 Don't forget to have a look around the control room and collect what you find, first, only then approach the pipe on the northern wall. Lara will start squeezing through subsequent cracks while you'll only need to wiggle the analog stick up (or press the directional button up). 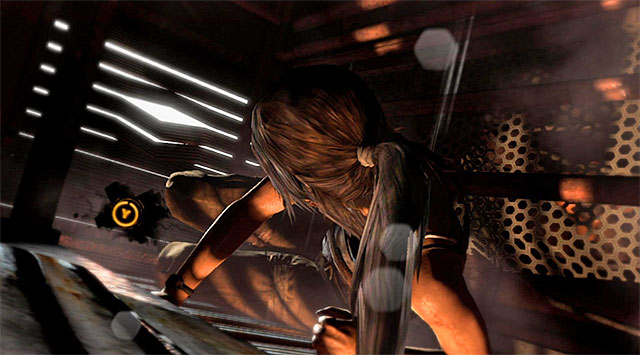 At the end of the way, press the indicated button a couple of times in order the break through to a new location - Base Exterior. 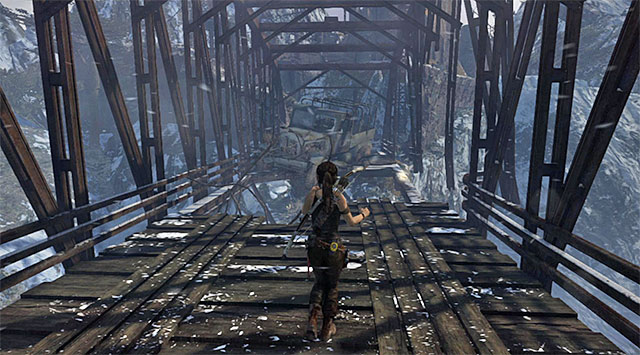 Turn right and drop down below, you'll find yourself in a new base camp (Bridge Overlook) where you can rest. When you're ready, make your way towards the bridge to the left. Walk over the narrow metal beam. 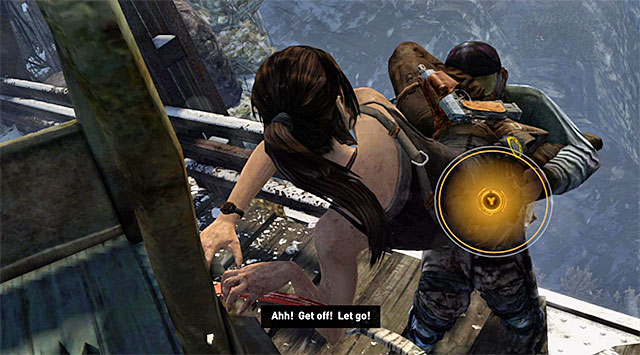 Be cautious, a while later Lara will be grabbed by a guard and a new series of mini-games will trigger. Start by wiggling the analog stick left and right (or pressing directional keys), then press the indicated button when it pops up (screenshot) (reward: 25 XP). 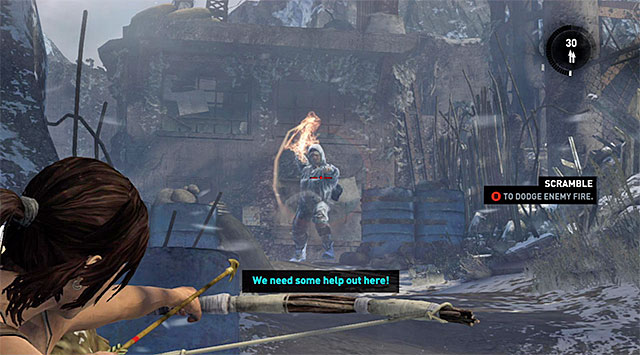 This is not the end of the problems, though, because every enemy in the area will be instantly alerted to Lara's presence. Hide behind the closest cover and start dealing with them. You need to be very accurate (your priority should be the Molotov cocktails guys), so the bow may not be the best choice. If you don't feel too comfortable with it, consider the submachine gun. 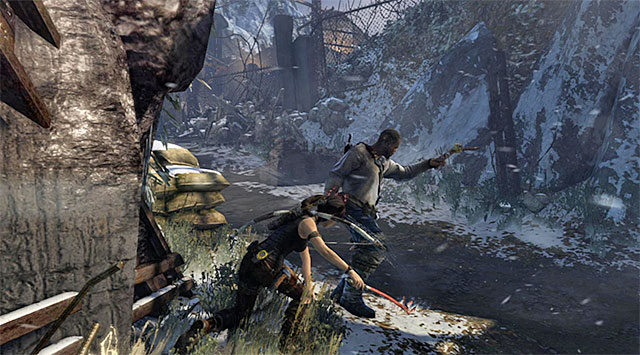 Change covers as often as you can in order to avoid the exploding Molotov cocktails. Watch out for enemies charging with swords. If possible, try to take them out in melee combat, assuming, of course, you've leveled up enough to use the climbing axe to deal damage. Otherwise, use the pistol and keep dodging. 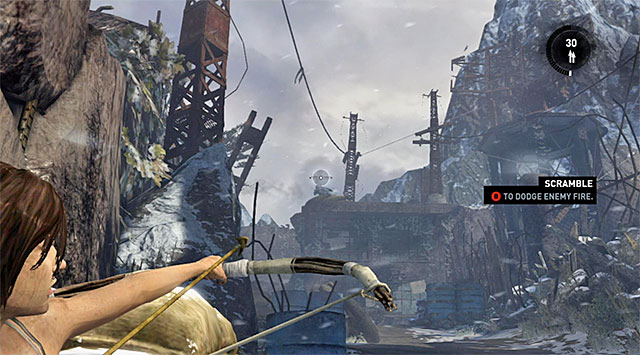 Leave the "snipers" for last, eliminating them with arrows to the head. You'll find the first on the roof of the building ahead of the path, the second hiding on the right. 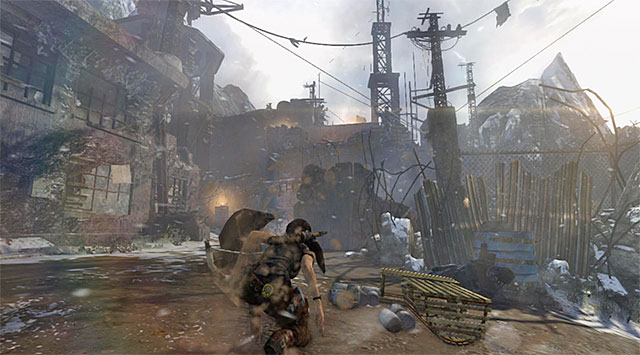 Don't rush into anything; new enemies will keep coming at you from the right and at least one of them will slide down the zip-line to get close to you quicker. It's best to retreat and get rid of them one by one, focusing on the ones running up to Lara first. 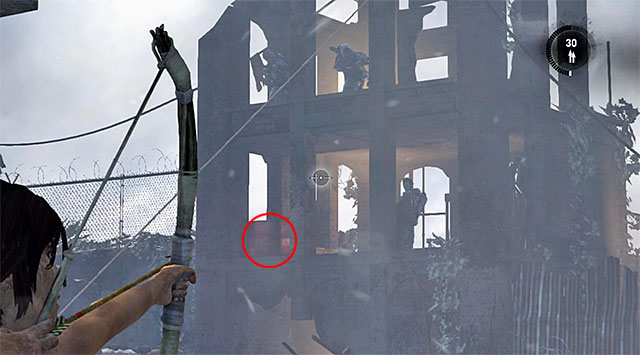 Resume the walk along the main path. You'll run across a new group of guards in the northern building; the first thing to do would be to shoot at the explosive barrel. 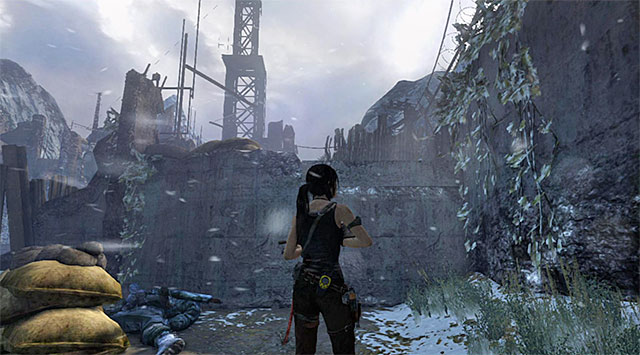 Move forward. Stop at the above wall. Before you scramble up it, it would be a good idea to revisit the secured areas in search for collectibles, and select the submachine gun from the inventory. 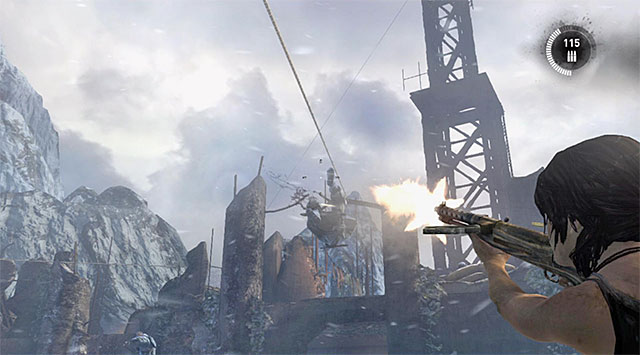 Shortly after reaching the highest ledge, a new shootout will commence. Hide behind sandbags and start taking your enemies out. I strongly recommend paying especially close attention to Molotov cocktail-throwers and the guys that will be sliding down the zip-line. If one of them manages to land, eliminate him in melee combat or drop down to the courtyard below. Fight them off until there's no one left. 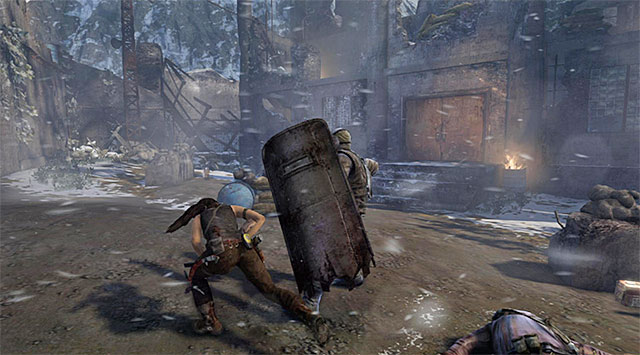 When the fighting is over, drop down to the courtyard (if you haven't already), then advance to the door of the main building to the west. Here's where you'll have to fight off against a mini boss-type guard with a riot shield. Start running around him, dodging whenever he tries to hit you with the shield. 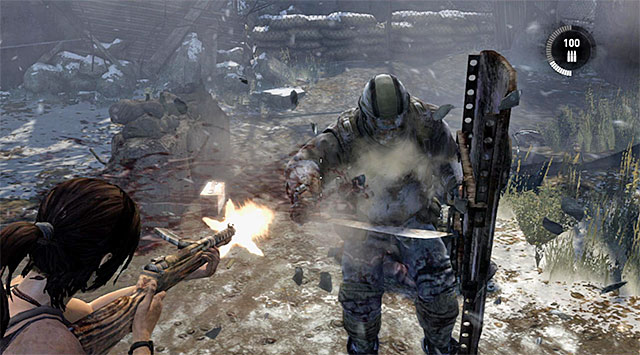 Notice that when he swings the shield in order to hit you, he opens up for moment (screenshot). Shoot at him when he does (submachine gun highly recommended), trying to aim at the head (reward: 50 XP). 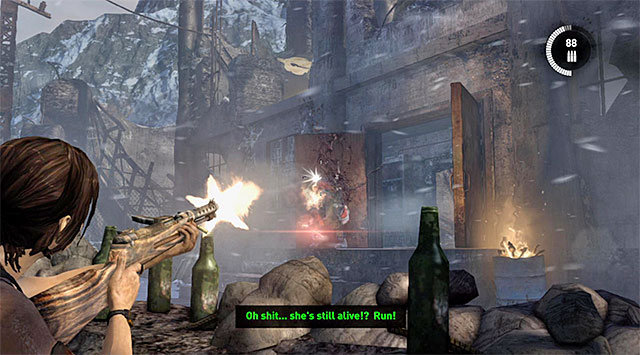 When you take him down, proceed to eliminating the regular guards coming at you from the western building. Use covers and look for opportunities to perform headshots. 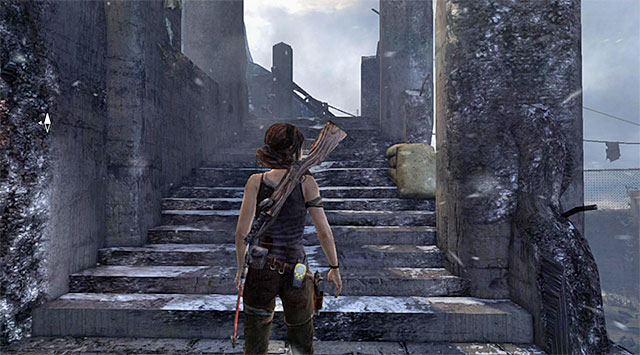 Go through the newly unlocked entrance to the western building and locate the stairs to the first floor. Make your way to the gallery, turn left and use another set of stairs. Notice that there's a second base camp in this location (Radio Tower), though it's not mandatory to stop there. 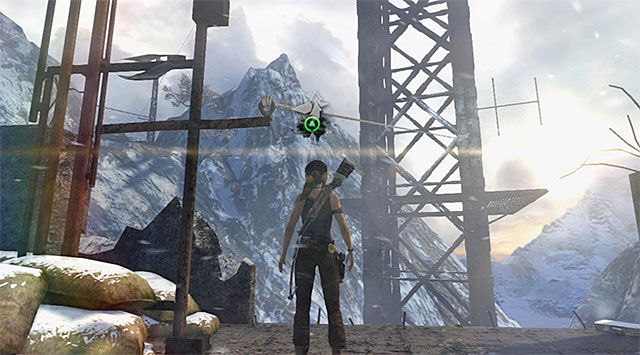 Make your way towards the radio tower. Press the jump button to grab onto the zip-line and use it to reach the tower. 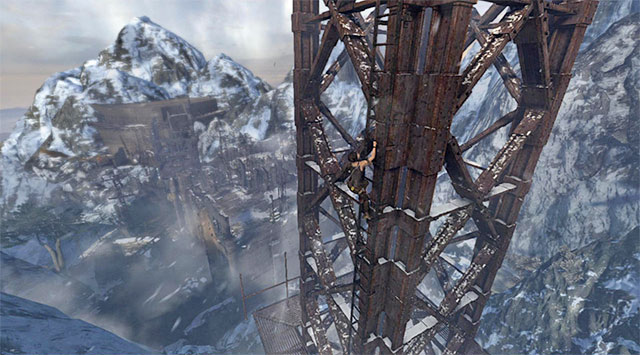 The final part of the ascent is very linear, you'll only need to wiggle the analog stick up (or press the directional key). 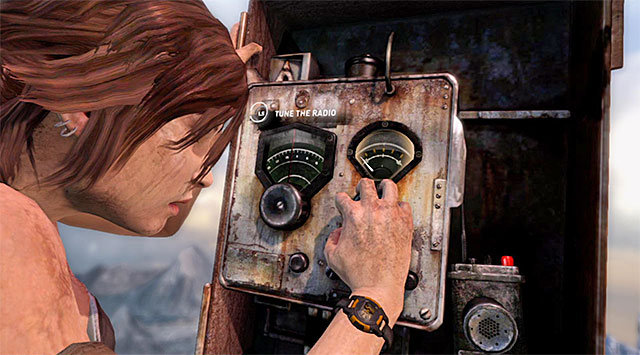