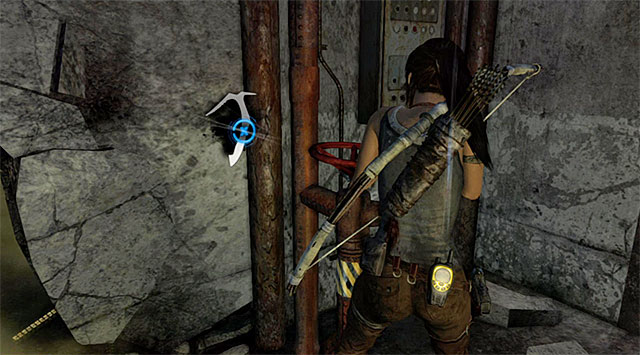 Make your way forward through a new location, Mountain Base. Don't forget to look around and search subsequent rooms, because there is a lot of collectibles to find here. When you get to the closed door, use the climbing axe on the left valve (press and rapidly tap the action button). 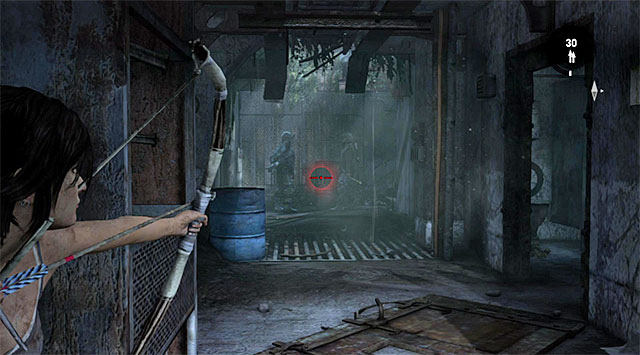 Pass through the hole in the wall. Slowly, approach the nearby corridor where two guards are having a conversation. Surprise them by shooting the nearby barrel (screenshot). The explosion should kill them on the spot, but expect a new guard to arrive and dispose of. 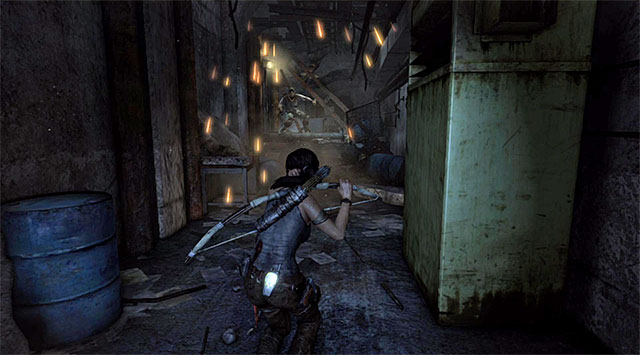 Make your way towards the killed enemies and take the stairs up. Be cautious; as soon as you turn right again, you'll be unexpectedly greeted by a guard with a sword who will come out the hole. Use the pistol to fight him off, or push him back (if possible, you can also use the climbing axe). 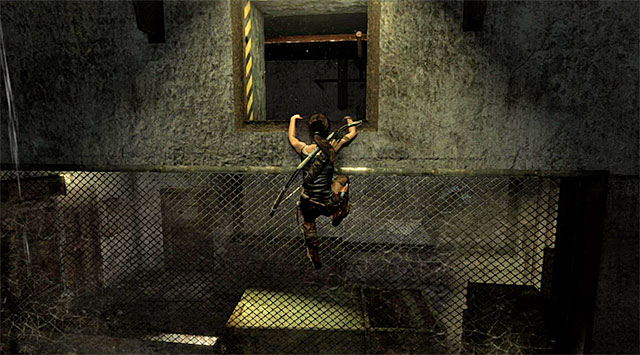 Go down the same hole the guard came out of in order to reach a larger room. Turn left, scramble up the machine, and pass through another hole. 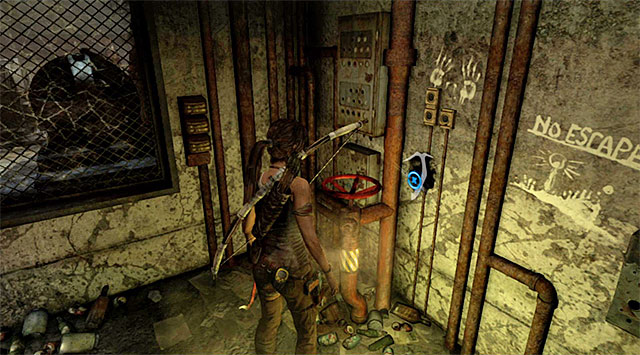 Approach and interact with the valve. Get ready; you're going to have to leave this place very quickly. Go back to the previous room through the same hole. 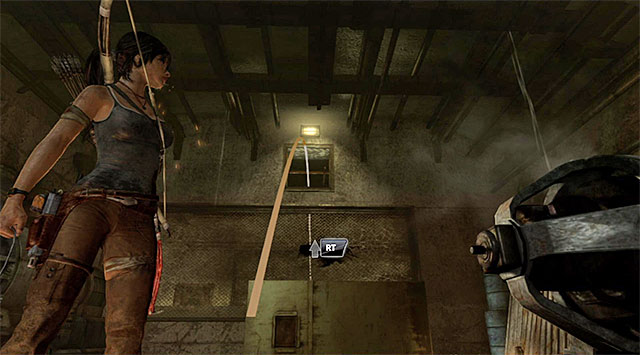 Look around for some Oil Lamps and pick one of them up. Get into aiming mode and hurl it so that it lands in the control room you've just escaped from (screenshot). This will lead to a huge explosion (reward: 250 XP). 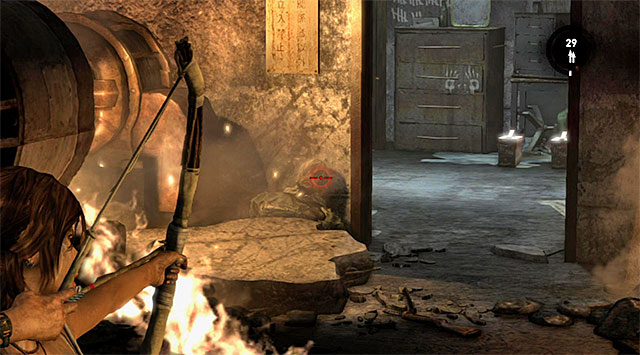 Go inside the room with a seriously wounded enemy. Kill him and see to his firearm, which will be permanently added to your inventory. It's a WWII Submachine Gun (reward: 250 XP). 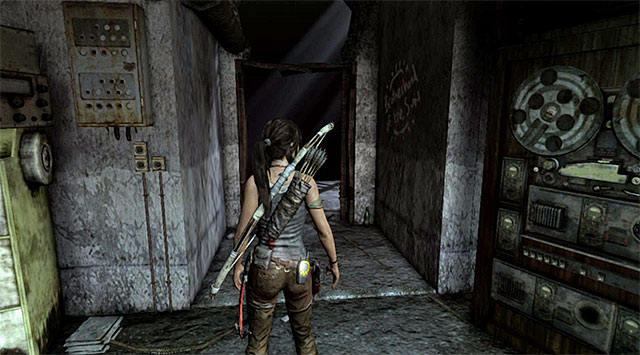 Enter the next room, take what you find and go left, down the corridor leading to the unlit area. Get ready for a challenging fight. 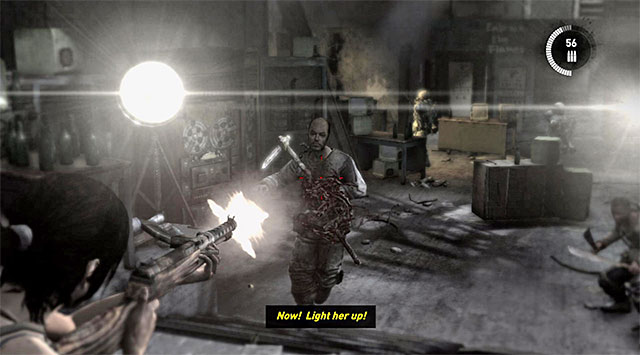 As soon as Lara steps in, she's in store for an ambush, which sadly can't be avoided. Don't expect to be able to retreat to the previous area, because the door will shut behind you. Use the submachine gun to take down the enemies coming right at you. 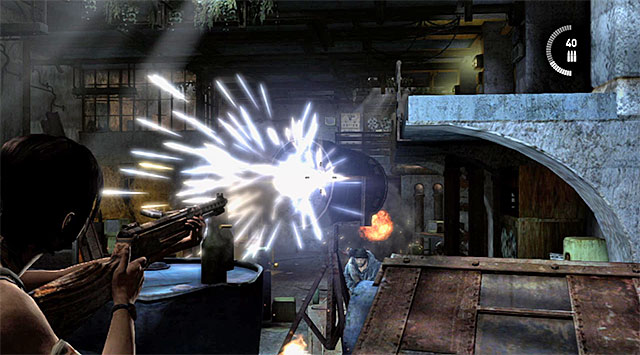 Once they're down, take cover and try to shoot the searchlights as soon as possible. 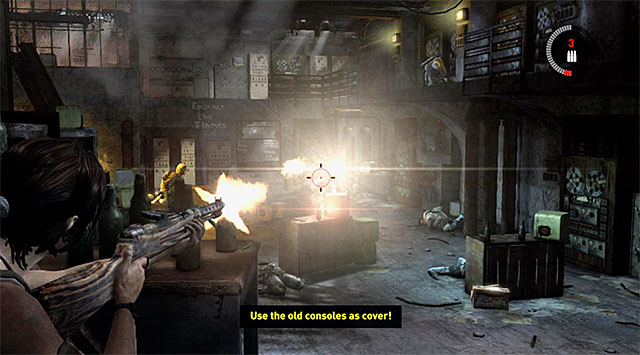 Once it's done, focus on the remaining enemies. I recommend moving between the covers left and right of the stairs and using only the submachine gun (don't risk attacking them full-on or scrambling up the walkway to the right). Fight them off until you clear the place (some enemies will shop up later). 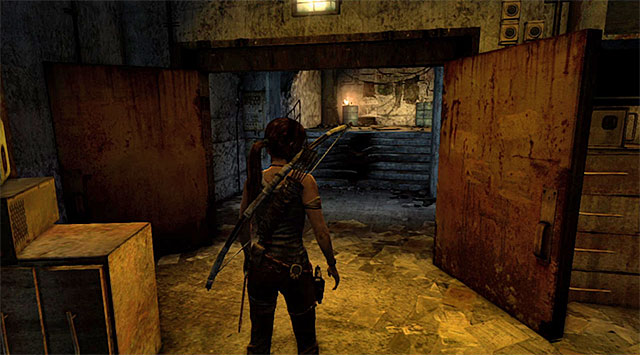 It's a good idea to check the whole place out, especially since there is a new base camp upstairs (Map Room). Once you've gotten the lay of the area (and located all collectibles), exit through the north-western doorway. 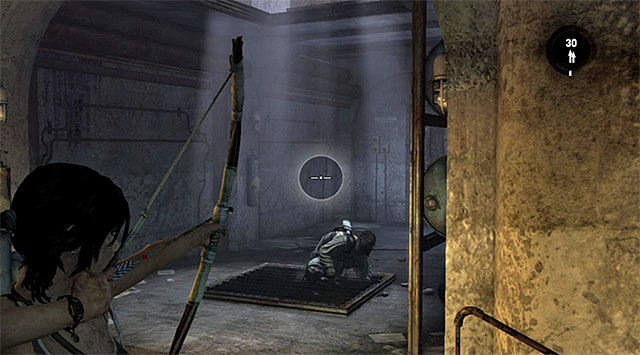 Follow the linear corridor, but be ready for a surprise attack from a sword-armed enemy. Once he's dealt with, use the climbing axe to reach the communications room; the game will trigger a longer a cut-scene (reward: 100 XP).