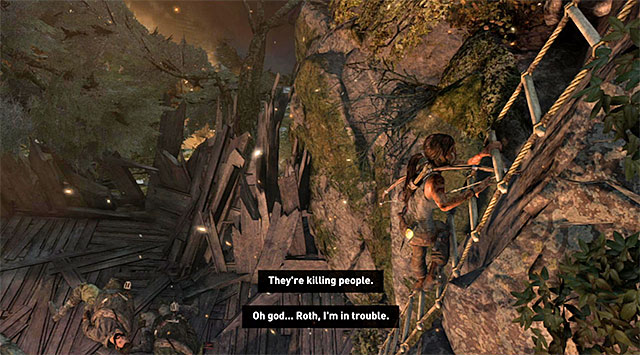 Don't forget to collect supplies when the fighting is done. Use the ladder mentioned above to reach the eastern part of the Mountain Temple area. 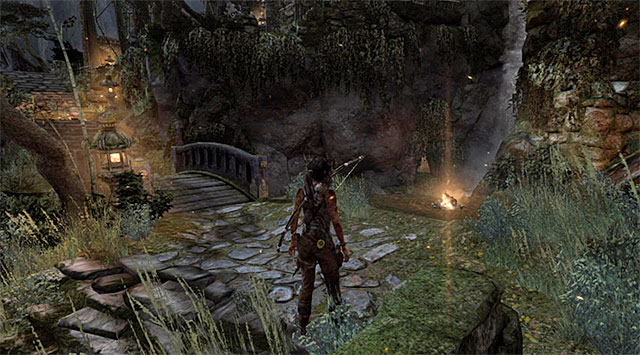 The area is quite rich in all kinds of collectibles, so you're free to look around; I recommend, of course, to have a look the separate part of the guide. If, however, you wish to complete the current objective as soon as possible, stay on the main path; you'll reach a new camp on the way, so I recommend resting (the game will also unlock the second of Lara's Journals and give you access to Fast Travel; from now on you can freely move between the previously discovered base camps). 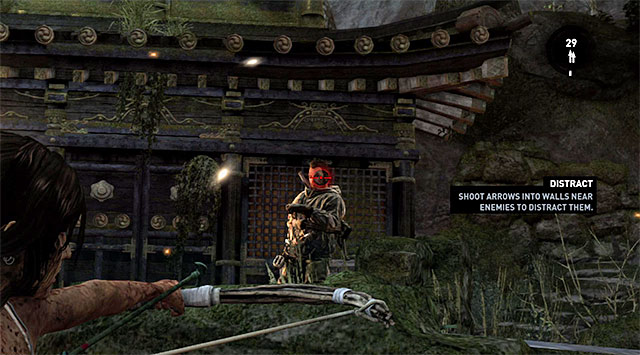 Resume the walk towards the mountain top, but stay alert, you'll run into two thugs in a while. Hide behind a cover and, despite what the game tells you, try to get rid of both enemies. I recommend the bow and aiming for their heads, but you may as well use the pistol. 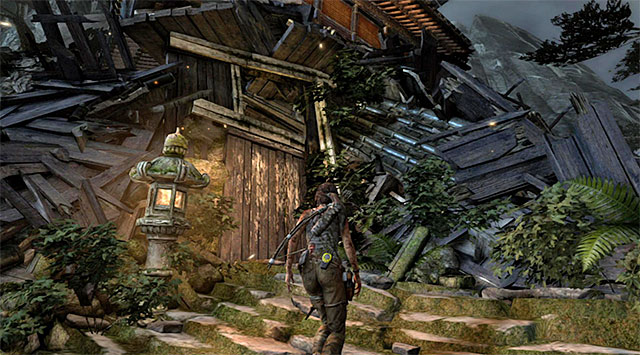 Proceed forward, but keep to the main path. Your current destination is the entrance to a larger building which you'll have to leap up to. 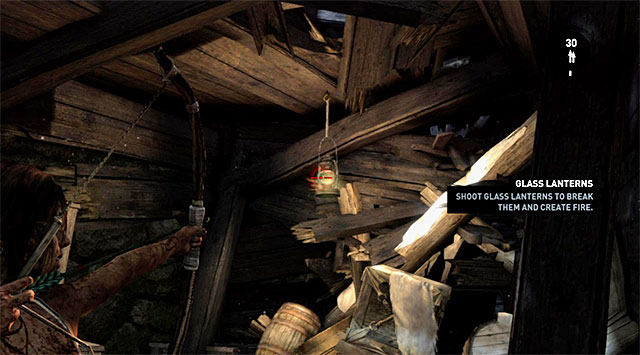 Inside, start off by destroying the Lantern, which is one the collectibles in the area (reward: 10 XP). The makeshift bow works best for that purpose, but you're free to use the pistol if you want. Use the newly unlocked passage. 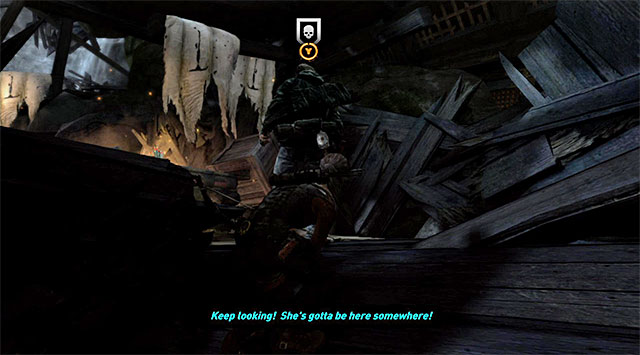 Shortly thereafter, you'll reach the main area which is occupied by two guards at the moment. The game will suggest that you practice stealth kills, and this is a thing worth learning. Stealth kills are done by approaching the enemy from behind, pushing the action button (screenshot), and then rapidly tapping it. One of the advantages of stealth kills is that each will give you 30 XP instead of the standard 10 or 15. 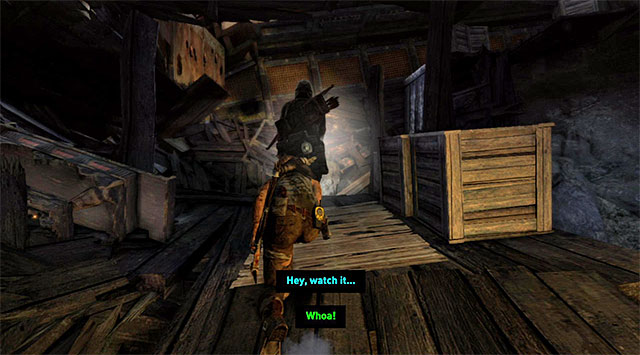 Stealth kill the second guard as well, especially since he shouldn't turn around and detect you in any way. Collect supplies afterwards and make your way towards the other part of the building; you'll reach a ledge to climb onto. 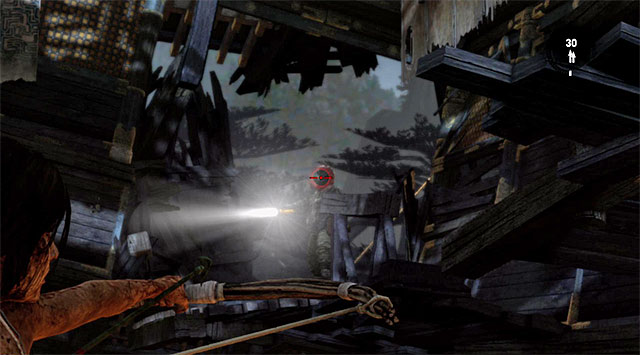 Take cover and plan your next steps carefully. I recommend the makeshift bow here, starting with the single guard on the right. Make sure to use Survival Instincts to check whether a given enemy isn't watched by anyone else (can't glow in red); this will let you stay undetected for a longer while. 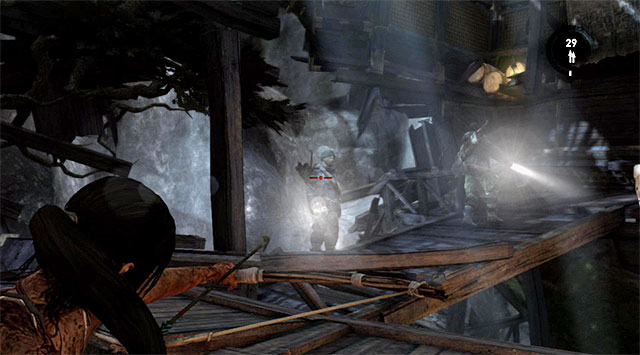 Two guards patrolling the surrounding walkways should be next in line. This time it's best to wait until they separate and attack when they do. 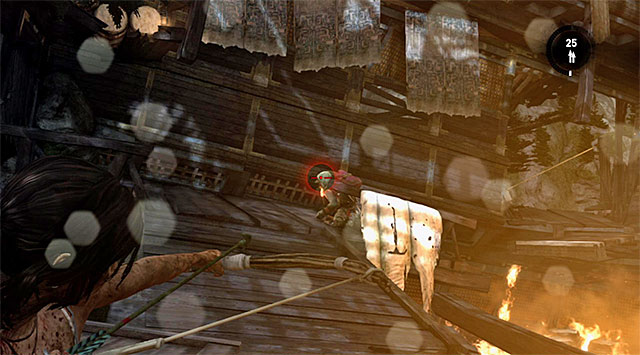 Eventually, your actions will alarm some new enemies and they will start throwing Molotov cocktails at you (even if you've only been sneaking so far). There's one thing to remember: you won't be safe behind any cover because a cocktail may easily hit you anyway. If you're handy with the bow, keep using it. Otherwise, switch to the pistol. 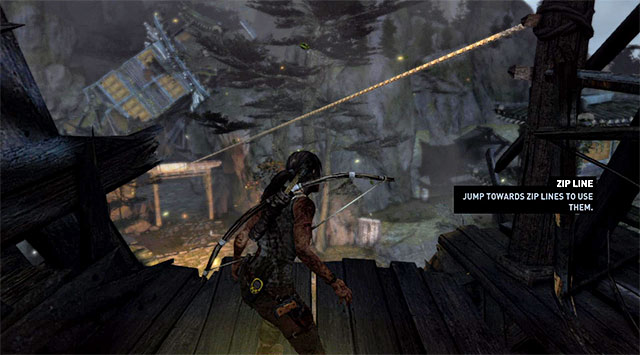 Keep in mind that you can't stay in this building for too long because it'll start to burn. Continue onwards, leaping over a gap as you go. When you reach the above edge, jump towards the line and wait for Lara to slide down. 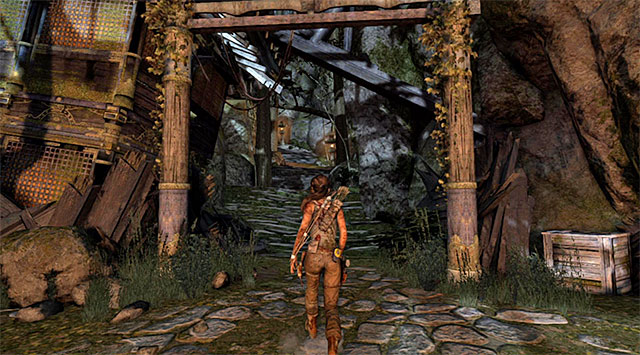 You've just reached a new area full of collectibles, so take a moment to search it. You can easily go back to the Mountain Temple through a newly unlocked passage adjacent to the large building you have just left. When you're ready, head south-east. 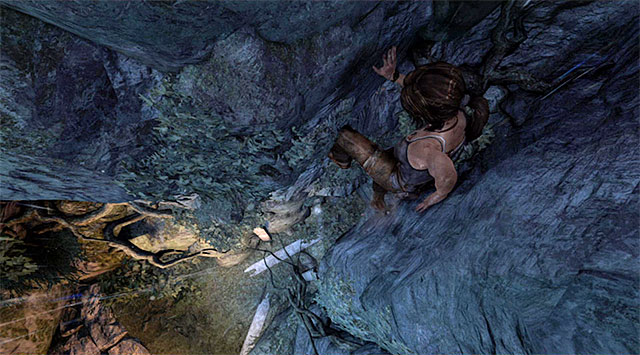 When Lara reaches the cliff, she should automatically start scrambling up. Your only involvement would be to wiggle the analog stick up (or press the directional key). Once you're on the ledge, leave the cave to reach a new location, Mountain Village, where you'll find a seriously wounded Roth (reward: 10 XP).