I guess you won't be surprised by the fact that you'll encounter several new soldiers along the way (screen). The easiest way to get rid of them would be to stop the time. You can also try and take their weapons. Don't go straight ahead. Instead, turn left. Be carful, though. You'll encounter a new group here. Go back and kill the soldiers with a crossbow. Proceed to the central area. 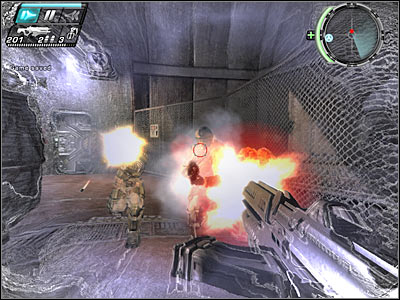 Keep moving forward. Once again, you will have to defeat a small group of enemy soldiers. This time you should consider using a large container (screen) for cover. Choose a powerful weapon from your inventory, because at least two soldiers will advance towards your position. Kill them quickly and use your powers to gain advantage over them. Head on to a new platform (the same one they used to get to you). 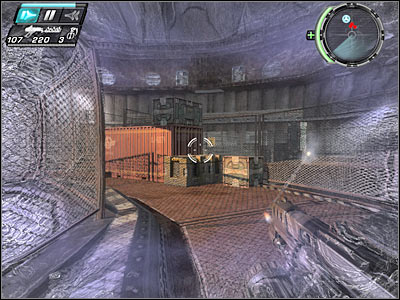 Once you've reached a new area, turn left and proceed towards the forklift truck. Once you're there, turn right and approach the ladder. Use the ladder to get to an upper balcony. Save your game there (quickly!!). It's very important, because you are going to be attacked by a new group of enemy soldiers. 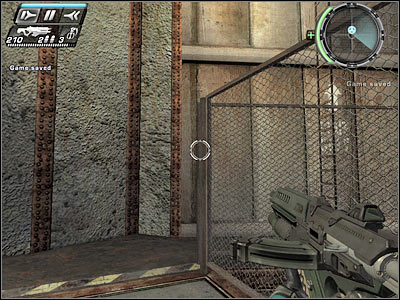 The easiest way to win this upcoming battle is by using a slow-motion feature. Activate it and enter this new room at the same time. You will have to kill two enemy soldiers. Once they're gone, find a control panel and press a button. This will activate a wind turbine (cut-scene). Wait for the game to grant you with a new task.

New mission objective: Proceed to the wind tunnel and find a way up to the main level 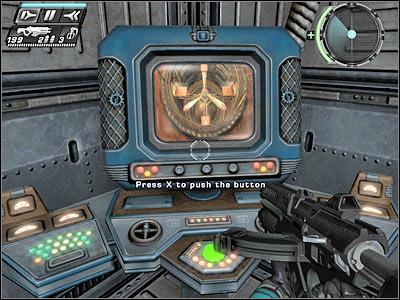 Once you've pressed the button, IMMEDIATELY turn around, because one of the enemy soldiers will try to surprise you. Kill him with a little help from your suit. Once he's gone, head on to the second room and deal with colleague of his. I'd strongly recommend saving the game here. 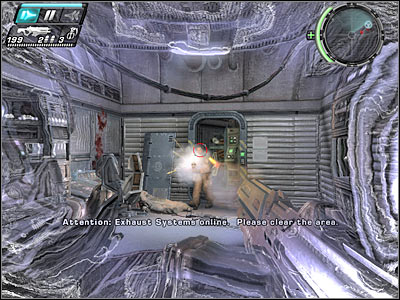 Head on to a new door. I'm sure that you won't have any problems finding it. Approach the balcony and pick up a sniper rifle. Use this weapon to get rid of visible enemy soldiers. There's not going to be too many of them, however they will be using crossbows, so you must be very careful. You should also be using a slow-motion feature to gain advantage over them. 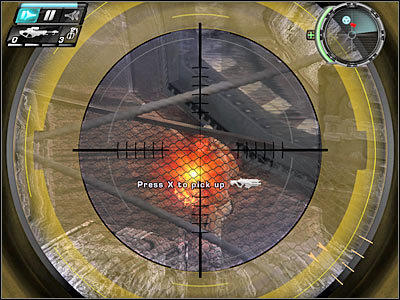 Once all the enemies are gone, drop the sniper rifle and go left. You should be able to find an ammo crate here. Head on to a nearby ladder. It will allow you to go back to the ground level. Save your game there. Check your compass and attack some of the nearby soldiers. Once again, you should be using slow-motion during these fights. 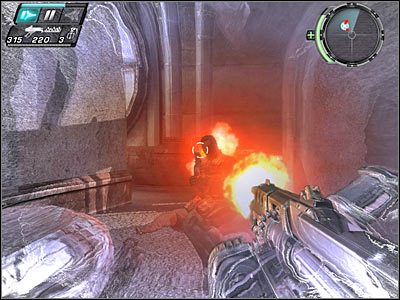