Once you're near the water, you will be allowed to leave the mine field. As a result, you won't have to search for any additional mines. Instead, head on to your current target area. Once you've arrived at your destination, listen to what one of your colleagues has to say. You'll take part in an assault. Read your new order and save the game. 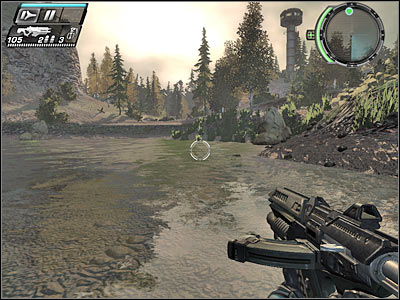 Obviously you will have to start running towards an enemy base. I wouldn't recommend staying in the back or attacking enemy soldiers from larger distances, because that would only be a waste of your time. Instead, we'll try to advance more aggressively. Make sure that you're moving between good covers, so you don't get hit. You should also use the crossbows in order to neutralize a few machine gun posts. 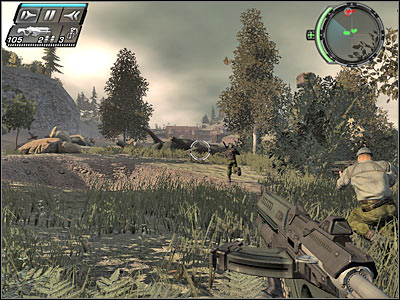 Like I've said before, you should be more aggressive while trying to advance towards an enemy base. Try attacking enemy soldiers from one of the flanks. As a result, you should consider hiding behind a large boulder (screen). Kill several soldiers from there and wait for the power bar to regenerate itself. You can also save your progress here, but it's not a necessary thing to do. 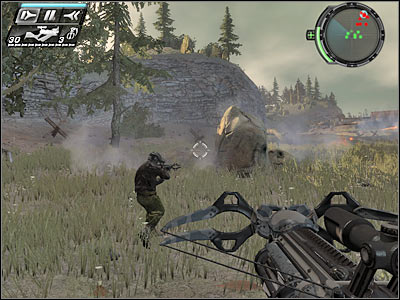 Now you should start running towards the main building of the base. It would be a good idea to use a slow-motion feature here, so you won't get shot by anyone. Hide inside the trenches, however this area may be guarded by several soldiers. Kill them and avoid the central area of the hill. Once again, wait for the power bar to regain full strength. You should also be using your compass, so you won't get surprised by anyone. 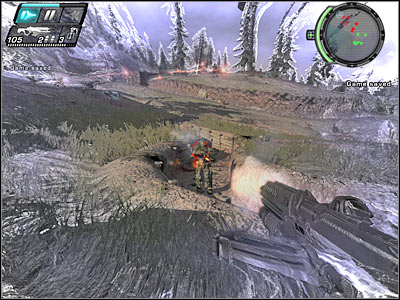 Keep running towards the base. Once again, you should consider using trenches in order to avoid being killer or shot too many times. You won't have any problems finding them (screen). Once you're inside the trenches, you should start moving towards a small bunker which can be found to your left. Save your game there. 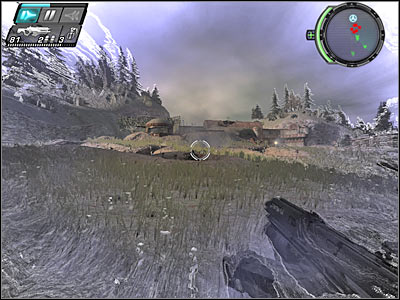 Try moving closer to the bunker. Check my screen if you're not sure which one it's going to be. Obviously you should be using the trenches. You will also have to watch out for an enemy cannon. It's located on top of a nearby hill. You may consider neutralizing it on your own or you can wait for one of your colleagues to do the same thing. One of the enemy soldiers will also be using a heavy machine gun post here. Surprise him and get rid of the remaining enemy units. 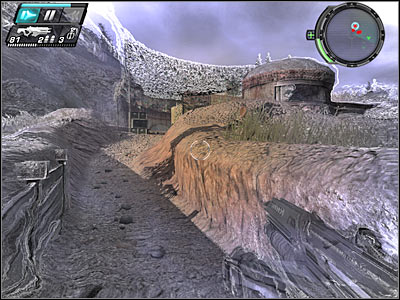 You are soon going to be joined by the rest of your squad. Now you will have to focus all of your efforts on getting inside the main base. As you've probably noticed, the base itself is heavily defended, however you should start shooting at enemy soldiers. They will be walls of the complex, so you shouldn't have any problems spotting them. Make sure that you're using slow-motion to increase your chances of killing them. 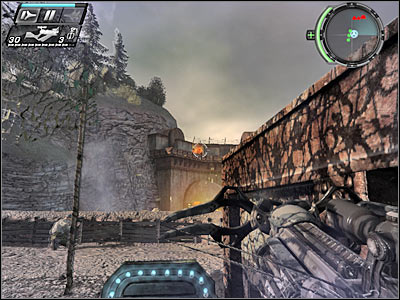 There's an ammunition crate nearby. Make sure that you've used it, especially if you run out of projectiles for your crossbow. If you have a rocket launcher at your disposal, it would also be a good idea to use it. Keep shooting at the enemy units. You will also be able to kill one of the snipers (screen) by aiming at a small hole. 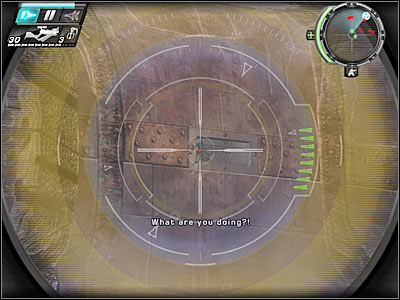