Get ready. You are going to be attacked by at least two enemy soldiers. Use the rocket launcher or your shotgun to get rid of them. You should consider hiding behind a large wall which can be founds to your right. You will be able to plan your next moves from here. Wait for other enemy units to show up here and kill them as well. 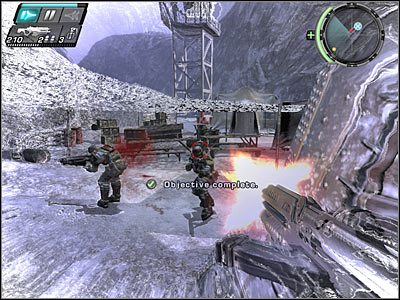 As for the main encampment, you should consider using a rocket launcher to secure this area. I'm sure that you won't have any major problems killing all enemy soldiers. You could also use a standard weapon to get rid of them, however you would have to consider aiming at explosive objects. You may also destroy a second sniper tower. 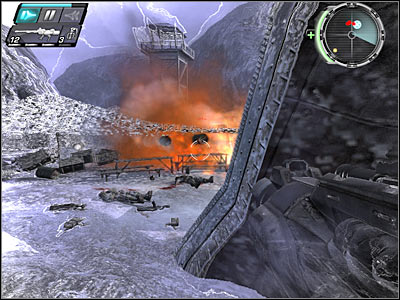 Reaching your new goal area will require you go through a small tent. This object can be found to your right. Be careful, though. Once you're inside, one of the enemy soldiers will try to surprise you by entering this tent. Kill him quickly, before he starts firing at you. You'll also encounter a second soldier very soon. Thankfully, he'll be surprised with you showing up near his restroom. 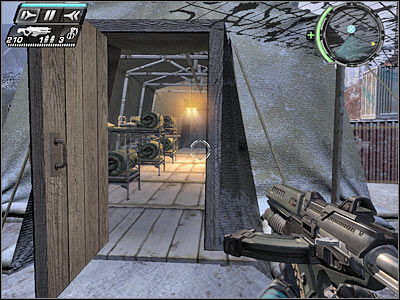 You won't have to worry about any additional units for the next few minutes. Instead, you will be performing a lot of dangerous jumps. Start off by moving towards a small hill (screen). Once you're at the top, you will have to perform a single jump. Aim for the container. 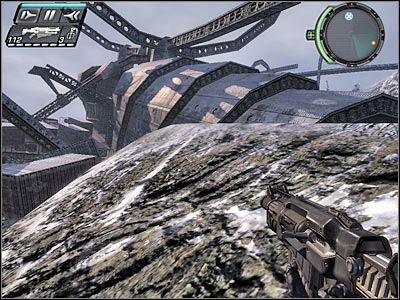 Next up, you will have to turn right. There are two metal platforms in front of you (screen). I guess I won't have to add here that you must reach the one closer to your main character. Once you're there, turn left and use the stairs. You won't have to hide here, because you won't encounter any soldiers. Instead, you will be given a new task.

New mission objective: Locate the train tracks on the opposite side of the canyon 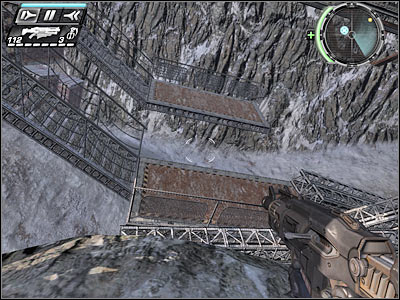 There's a new passageway up ahead. Go there now. Eventually you'll come across a small staircase. Use the stairs to reach the upper level. Now you will have to find a large hole (screen). Use it to get to the metal platform. Turn left and start moving forward. You must be extremely careful here, so you won't lose your balance. 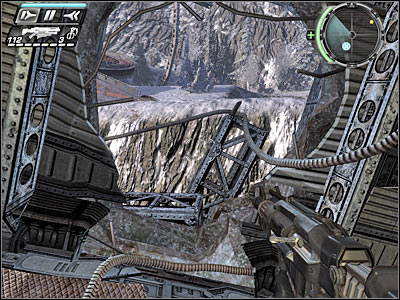 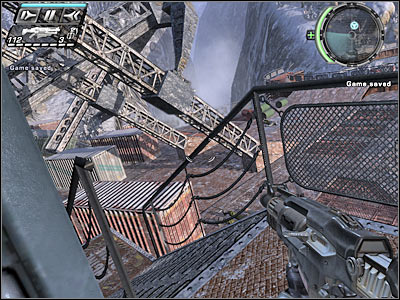 Approach the fan. Take your time to look around. As you've probably suspected, you will have to use your powers here, however we won't stop the flow of time entirely. Instead, use the slow-motion feature. You will have to jump over to one of the arms of the fan. Once you're standing on such a wing, turn left. Don't exit this mode right away, because it's not over yet. 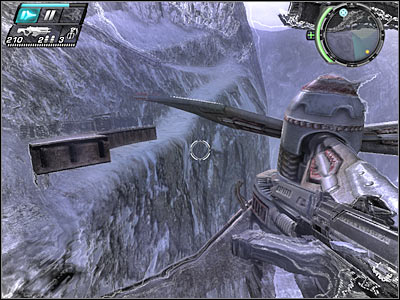