There are three enemy guards here and you're going to be attacked them as soon as you've landed. As a result, you will have to use a time stop feature. Kill two of them right away and turn towards the third one. Start shooting at him as well. If you've done everything properly, you shouldn't lose any health points. Once they're gone, search their bodies for ammunition and head on to a nearby door. 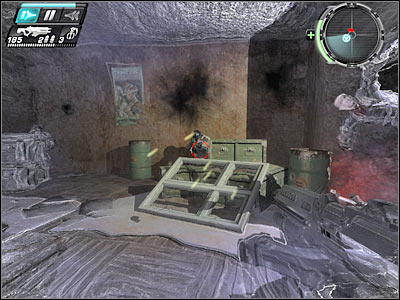 You should be able to find a second hole in the floor. Use it right away, because you won't encounter any enemy units there. Make a few steps forward. An enemy helicopter is attacking allied units here, however you there's nothing you can do about it. There are some electrical discharges in the vicinity. You will have to deal with this problem in order to be able to advance with the mission. 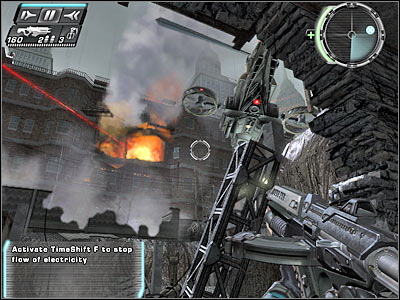 Your first goal here will be to reach a small platform. Check the screen if you can't find it. Start off by stopping the time. As a result, you won't suffer any injuries by standing in the water. Even more, you will be able to use the water as a stable platform. Once you've reached the platform, wait for the power bar to replenish itself. Turn right and repeat these actions in order to avoid discharges. You may proceed to the next section. 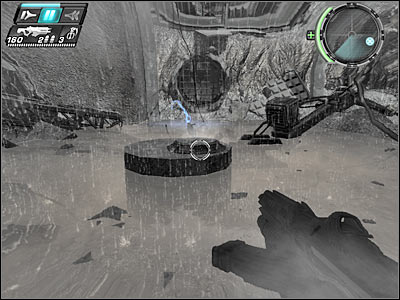 You could take a closer look at some of the nearby explosions if you wanted to, however it's not necessary. You will have to turn right once you've reached a larger tunnel (screen). This will allow you to get closer to a new group of Occupant soldiers. Save your game before you decide to exit this corridor. 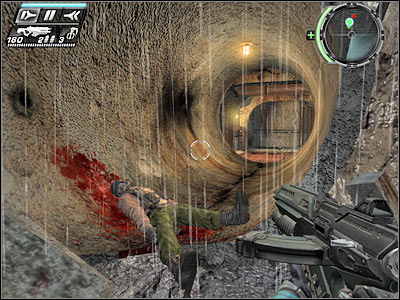 You will have to defend this area against enemy attacks. Thankfully, there's nothing you should be worried about, because your allies are very good at eliminating enemy soldiers. Start off by killing some of the closest enemy units (screen). Make sure that you're using the zoom function for a better aim. You can also go back to the tunnel area to replenish health and power. 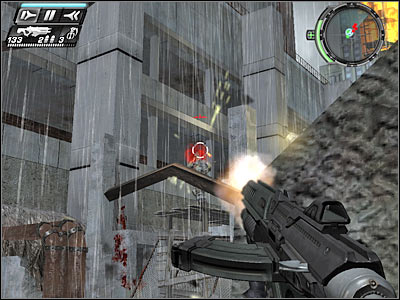 You won't stay here for too long, because a Sentry will appear in this area. Just as before, you won't be allowed to fight it. Wait for the Sentry to end its attack and start moving forward. You will also receive some new orders. Your first objective here will be to locate a small platform (screen) which leads to the upper structures. Use it. 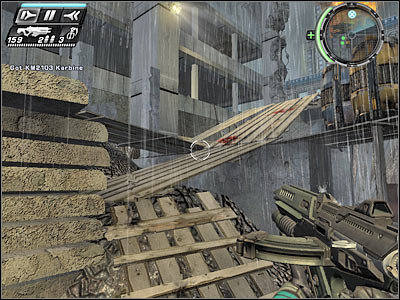