Be careful, because more enemy soldiers are heading this way. They will appear to your right. Just as before, you may consider stopping the time, although slowing it down will also do the trick. Either way, they have to die. Make sure that you're using a machine gun to kill them. Also, retreat each time you've suffered major injuries. 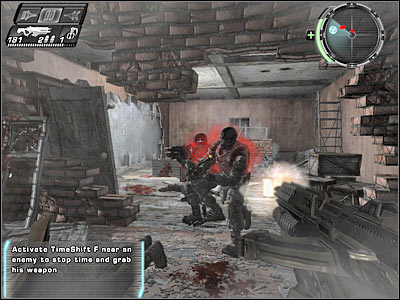 You should be able to collect a new weapon from one of the killed soldiers. It's going to be a shotgun called ShatterGun. I'd strongly recommend using it during some of the upcoming fights, especially since you'll be exploring small rooms. Sadly, you might have some problems acquiring enough ammunition. Head on to a destroyed wall (screen) which leads to a new room. 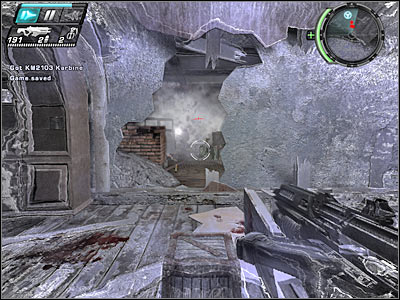 There are three enemy soldiers inside this room. It would be wise to use a time stop feature and take guns from at least two of them. As for the third one, start shooting at him before this mode deactivates itself. End this battle by killing all of them. You should also save your current progress. 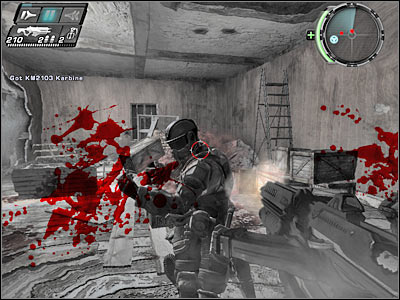 Keep moving towards your current destination. Obviously you will come across new enemy units along the way. Don't waste any of your powers while fighting single enemy units. Activate them only if it's a larger group. You should also remember that it's often wise to retreat rather than risk losing your life. 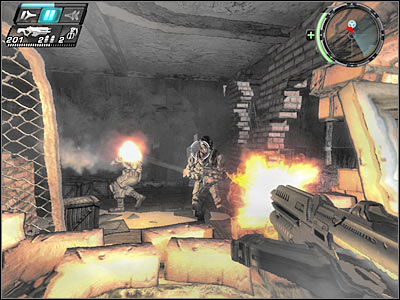 You will have to move on to the left corridor. There are some new enemy soldiers hiding in the next room. You should consider surprising them by activating a slow-motion feature (screen). You will probably be able to kill all of them before the suit runs out of power. Otherwise wait for the power bar to replenish itself. 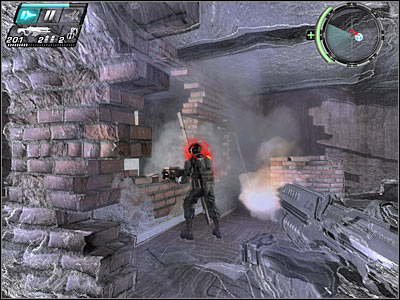 You should be very thorough in securing this area. Make sure that you've checked all of the surrounding groups. Once it's safe, locate a large hole in the floor (screen). I'd strongly recommend that you save your progress here. Use the hole to get down to the lower floor of the building. 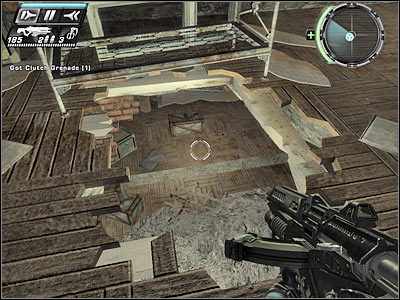