An armored car should arrive here in just a few seconds. This means trouble, because more enemy soldiers will appear near the checkpoint. Once you have them in your sight, start firing at them with the machine gun. You will have to kill all of them in order to be able to proceed with this mission. Don't worry about your allies, because they'll be all right on their own. 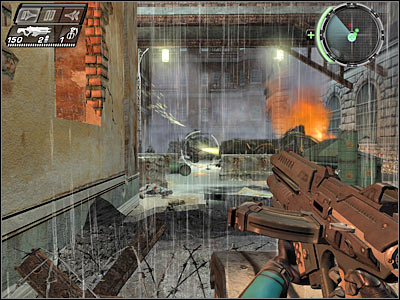 Now you will have to deal with a much more dangerous threat. You will also receive a proper warning on your screen. A large robot will appear near the armored car. Thankfully, you won't have to destroy it. Instead, move back to a safe distance and let the robot to damage the checkpoint. As you've probably noticed, some of the nearby buildings have been hit. You will also be granted with a new mission objective. 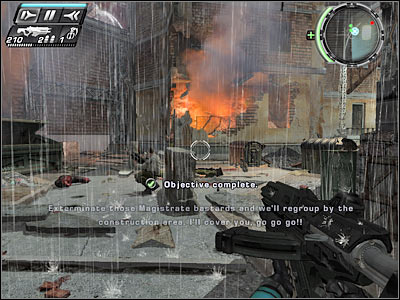 Your first task here will be to enter a destroyed building which can be found to your right (screen). You could activate a slow-motion feature if you didn't want to lose any of precious energy. Once you're inside, find the stairs and head on to the first floor. I wouldn't recommend making any unnecessary stops here. Next, head on to a small balcony and use the ladder. 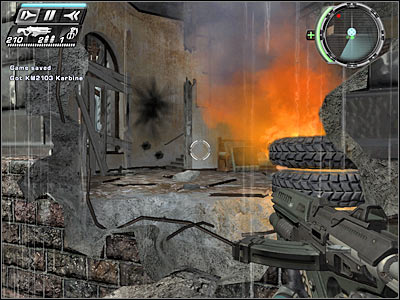 The game will suggest that you destroy a nearby window. Follow these instructions. You won't have to waste any bullets. Instead, press a middle mouse button for a melee attack. Once the window has been destroyed, enter this building and start moving forward. You'll reach a small hole. Use it to get to the lower level. SAVE your game here! 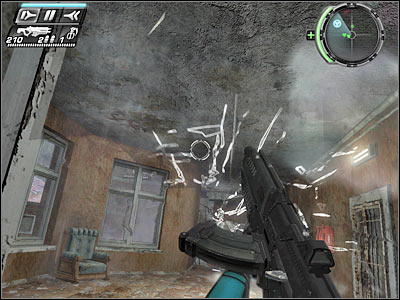 You will have to use a third feature of the Beta Suit here - reversing time. Start off by running forward. One of the missiles will hit this tunnel, resulting in a series of explosions. Once this occurs, activate the reserve time feature. This will "rebuild" the bridge and you'll have some time to get to the other side. Don't stop here, because this mode drains the power bar extremely fast. 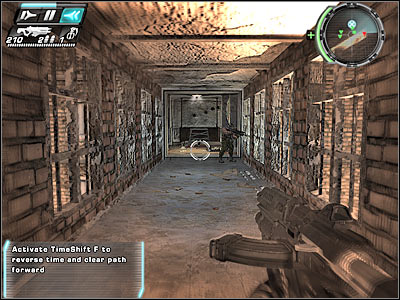 You will find yourself inside a new building. Don't worry about the destroyed corridor, because you won't have to go back there. Take your time and look around. You should be able to reach a hole. There's at least one enemy soldier down there. You should consider killing him. Use your powers to make this a lot easier. Once you're close enough to him, activate time stop feature. You can kill him or take his weapon by pressing the X key (screen). Move back and enjoy him being surprised by the fact that he has lost his gun. :-) 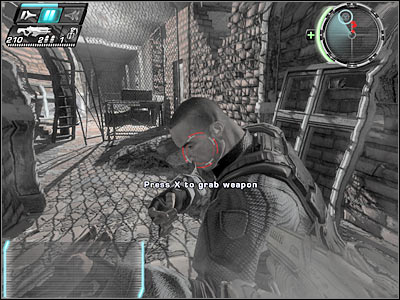