The quest will be unlocked after in main quest Tesham Mutna Geralt deals with Dettlaff. The confrontation with that powerful vampire can take place after the audience in the lair of the Unseen Elder (What Lies Unseen quest) or after finding Syanna in the fairy land (Beyond Hill and Dale quest). In the latter case Geralt must additionally save the life of Syanna (it is done by obtaining the ribbon in the fairy land).

Important - If Syanna died, then instead of the Pomp and Strange Circumstance quest another one will be triggered - Burlap is the New Stripe in which Geralt is in prison.

Speaking with the bootblack 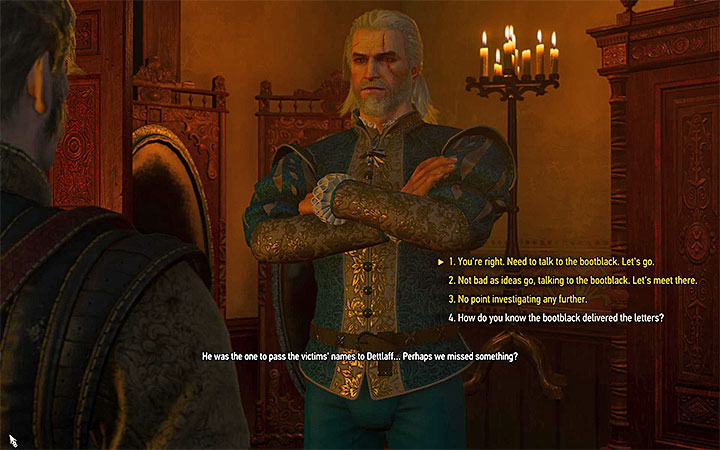 You can immediately go meet with the bootblack, do it later or completely ignore it

No matter how previous events went, Geralt and Regis will return to Beauclair. The local tailor will give Geralt new clothes which he must wear during the ceremony. Regis will talk about the previously visited bootblack and he will suggest speaking with the bootblack about the identity of the person that was supposed to be the fifth victim of the beast of Beauclair.

Important - meeting the bootblack is also possible if Geralt unlocked the medium ending (death of Syanna by the hands of Dettlaff) and he was put in prison (quest Burlap is the New Stripe). Meeting him will be suggested by Regis after the protagonist leaves the prison. You can agree and after everything is done deliver new information to Anna who mourns her sister. 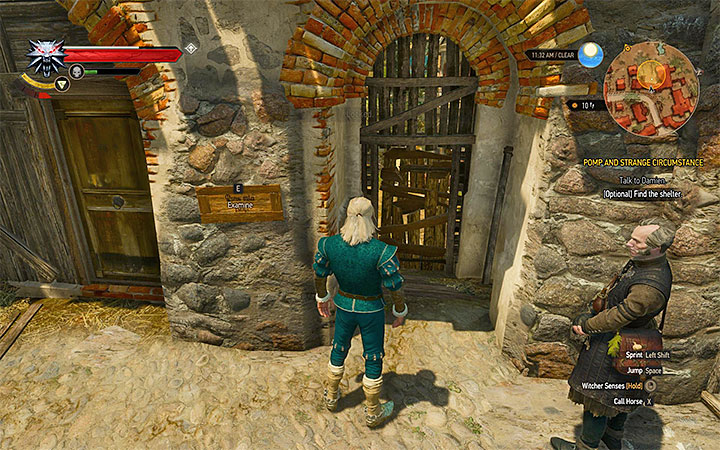 Entrance to the refuge for homeless

You can go meet with the bootblack immediately (the first dialogue option in the conversation with Regis) or you can decide to go there later (second dialogue option). The Bootblack can be found near Port in Beauclair. You can visit him only during the day. Ask him about the letters and you will be sent to the local homeless refuge. Go there and get rid of a group of bandits. Once it is done, speak with the owner of the refuge and then with beggars. One of them will give you Letter revealing the fifth victim. Reading it will allow Geralt to determine that Syanna was planning to order Dettlaff to kill her sister Anna.

Meeting with Syanna in her cell 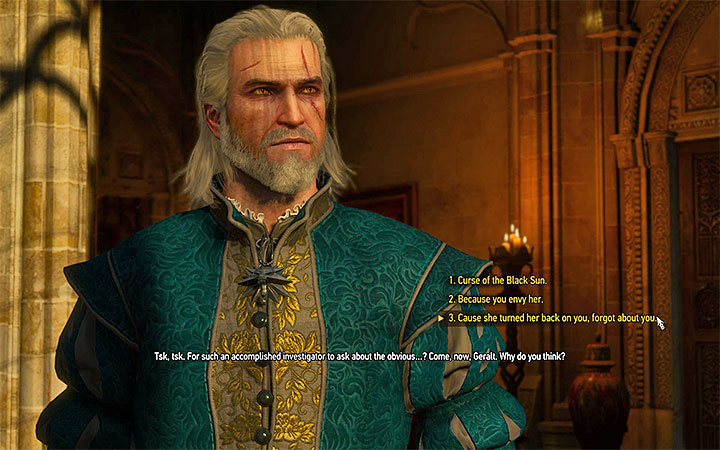 You can meet with Syanna in her cell in the palace if previously you found her in the fairy land (Beyond Hill and Dale quest), you protected her from death by the hands of Dettlaff (Tesham Mutna quest), you met with the shoeshiner and you obtained the information about the fifth victim. All these actions will lead to unlocking the good ending of the game.

Go to Palace in Beauclair. Speak with the guard who guards the room with Syanna once you arrive. After the short conversation you will be able to meet with her. Conversation with Syanna is very important if you intend to unlock the good ending for the game. In that case you must select the following dialogue options: 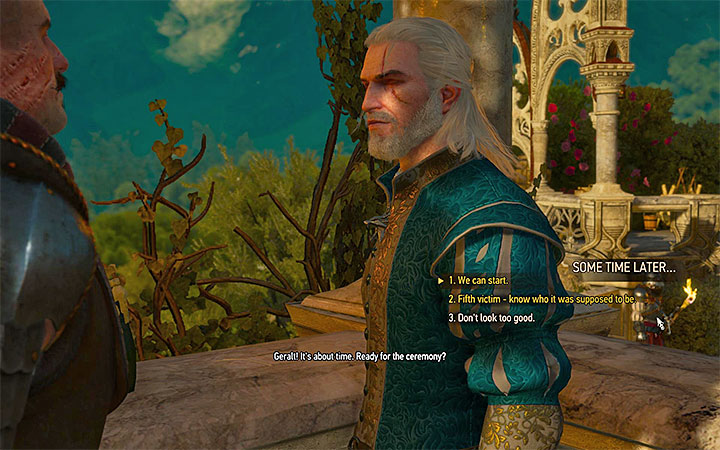 If you know about the fifth planned victim, you can share the knowledge with Damien

Geralt must meet with Damien de la Tour no matter what decisions he made earlier. If you don't plan meeting with Syanna in her cell, then you must reach the place where you speak with Damien on your own - he can be found in Palace Gardens. If you met with Syanna then Geralt will get to the conversation place automatically.

During the conversation with Damien by default you can only confirm that you're ready to participate in the ceremony. The only exception is when you met with the bootblack and determined that Anna Henrietta was supposed to be the final victim of the beast of Beauclair. You can tell Damien about it, but it won't impact the ceremony too much.

Participating in the ceremony 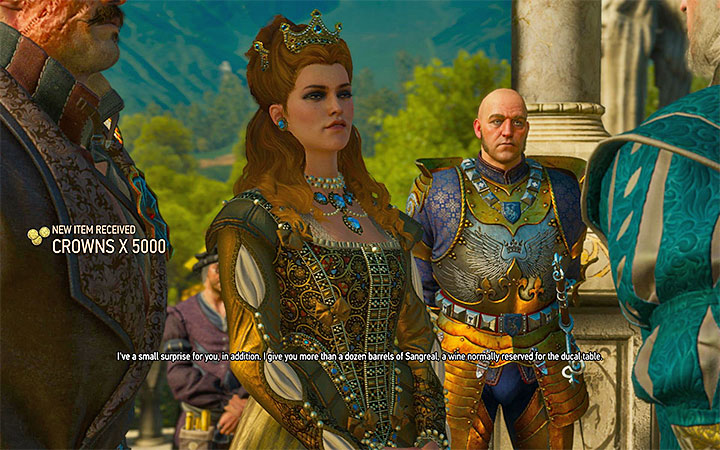 Anna Henrietta will give you, among other things, plenty of crowns

The first part of the ceremony is very similar in all possible variations and endings. Anna Henrietta will reward Geralt with Order of Vitis Venifera, 5000 crowns and Sangreal wine supplies. Then you will be asked to accompany the woman in the meeting with her imprisoned sister Syanna. 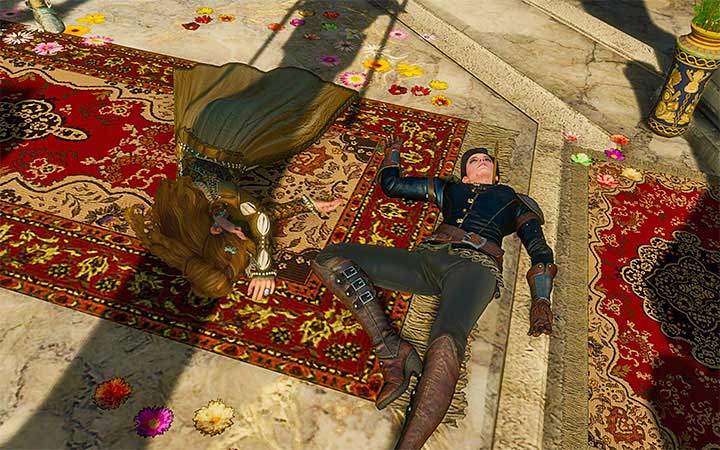 Bad ending - both sisters are dead

If you haven't completed all steps required for unlocking the good ending, then the dialogue options selected during the conversation with Syanna will not have any importance. In all cases the events will go in same way - Syanna will murder Anna and will die herself. 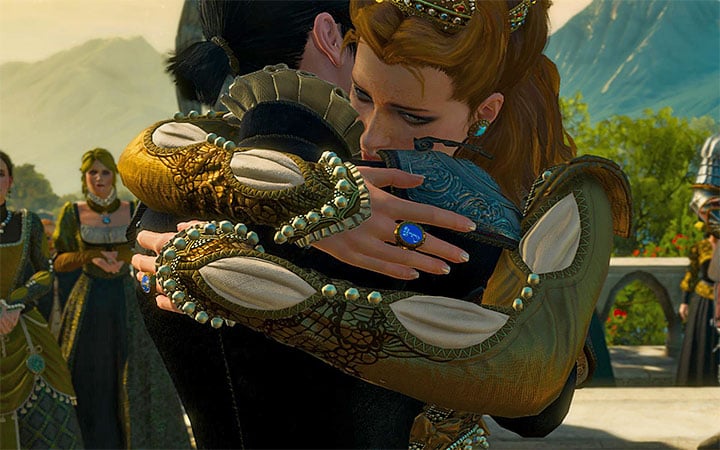 If until now you correctly performed all actions leading to unlocking the good ending, then soon after the meeting with Syanna starts select first dialogue options. Geralt will decide that Syanna had her reasons to feel grudge towards Anna and that Anna was very young and had to make a hard decision. The sisters will reconcile and none of them will die. 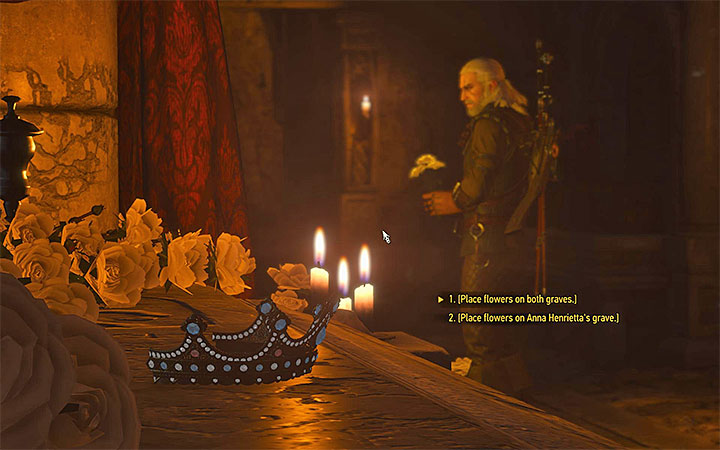 The first part of the epilogue can be impacted by which ending you unlocked. If during the ceremony you watched the bad ending, then the whole city will be grieving after Anna Henrietta. One of the local women will give Geralt flowers. Go with them to the cemetery in Beauclair and enter the underground crypts. Speak with Damien and decide whether you want to leave the flowers only at Anna's grave or at Syanna's grave as well. 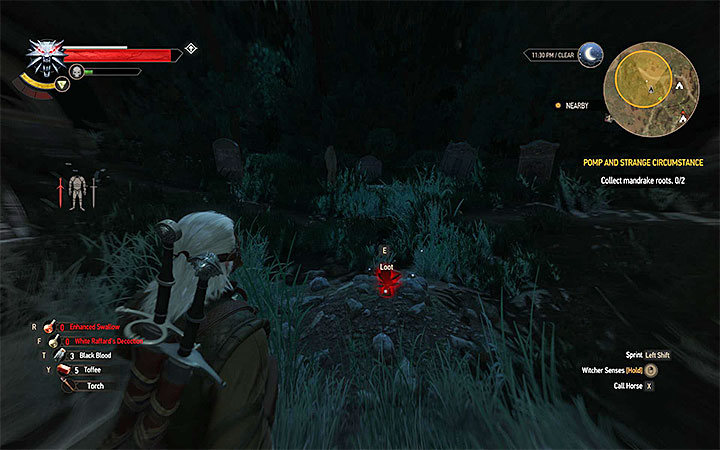 The final part of the epilogue is same for both endings. Geralt will meet with Regis on Mere Lachaise Cemetery. You will have a short talk with friend and will have to complete a simple task of collecting two Mandrake roots. As Regis suggests, wear mask and gloves before doing it. If you skip this step, then Geralt will be seriously poisoned while trying to take the roots. Use Witcher Senses to find the plants. In the meantime Regis will disappear, but simply follow the footprints to find him again. Geralt's friend will take care of the vampires that attacked him.

At the end of the quest you can answer Regis' questions about what will you do now. No matter the answer you will unlock a very short quest Be it Ever so Humble.