The unofficial guide to The Witcher 3: Blood and Wine contains all the information needed to achieve 100 percent completion of this very content-rich expansion. The largest part of the guide are the descriptions of all the main and side quests, as well as all the new witcher contracts and treasure hunts. The quest descriptions contain, among other things, information about the circumstances of their unlocking, all the steps required for their completion, all the decisions that have to be made in their course, as well as their consequences, and the possible prizes we can receive for their completion. The chapter ends with a section dedicated to all the endings available in the expansion.

Much space in the guide is also dedicated to the maps of the duchy of Toussaint, where the action of the expansion takes place. In that part of the guide, you will find a large world map as well as numerous maps of smaller areas, where we have marked cities, villages, and any other places worth exploring.

An entire separate chapter of the guide presents the most important innovations that were introduced in Blood and Wine. The guide will familiarize you with things like the new set of cards - Skellige (along with card locations as well as the people with whom you can play), the debuting mechanics of subjecting Geralt to mutations (the process of unlocking mutations, the principles of their operation, the most interesting mutations), the new pieces of gear of can find, romance options, or the option to manage your own estate (the Corvo Bianco Vineyard).

Furthermore, the guide is complement by several smaller chapters focusing on descriptions of noteworthy boss fights appearing in the expansion and on the alphabetical list of all available quests, which you might find helpful in effective navigation through this guide.

Blood and Wine is the second major story expansion for The Witcher 3: Wild Hunt. The action takes place in the duchy of Toussaint, ruled by the duchess Anna Henrietta. The realm features an entirely new map, which you can explore at will and discover its subsequent secrets. The expansion provides over 30 hours of gameplay, and offers the opportunity to complete almost a hundred new quests. In addition, Geralt can acquire new elements of gear, complete a brand new set of cards, this time from Skellige, and face several previously unseen monsters.

About The Witcher 3: Blood and Wine Game Guide

Hot Topics of The Witcher 3: Blood and Wine Game Guide 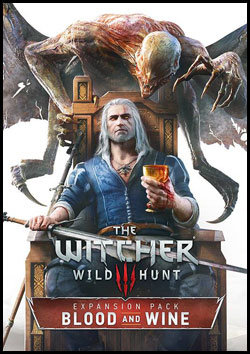 The Witcher 3: Blood and Wine is the second major expansion for The Witcher 3: Wild Hunt, an action RPG that came out in spring 2015. The story of Blood and Wine takes us to the entirely new land called Touissant, one of the few countries in the Witcher universe that have not been touched by war. As it quickly turns out, the atmosphere of peace and bliss in Touissant is but an appearance. In fact, the duchy hides a dark and bloody secret, and thus, the White Wolf will have to face an evil that, once again, can be fought and defeated only by a witcher.

Compared to The Witcher 3: Wild Hunt, Blood and Wine does not introduce any major changes to the gameplay mechanics, save for a number of novelties, tweaks, and enhancements brought by the subsequent patches for the original game. Just like with Hearts of Stone, the first paid DLC for The Witcher 3, the expansion offers a completely new, multi-threaded plot which is comparable in size to that of The Witcher from 2007, the first installment of The Witcher series. Moreover, the game was supplemented with multitude of side quests, new treasures to find, bandit camps to loot, new equipment and Gwent cards, as well as entirely new NPCs. Unlike Hearts of Stone, the action of Blood and Wine takes place outside of the realms known from the vanilla game.

More About The Witcher 3: Blood and Wine

The Witcher 3 cannot compete with Gothic or the Elder Scrolls series in terms of the quantity and number of the available mods, but this does not mean that we are not able to make our encounters with the White Wolf more enjoyable with certain mods.

"I bought the Witcher 3... Four Times!" How is The Witcher 3 so Popular After Five Years?

No expansion have been coming out, there's been only one patch in 15 months, modding community is barely active  and yet, the Witcher 3 is still on bestseller lists. Why does it still sell like hot cakes?

After the premiere of the Netflix Witcher we woke up in a world where we have two adaptations of Andrzej Sapkowski's books that have gained international fame and recognition. We try to compare them applying different criteria.

Who is Andrzej Sapkowski? The Best Quotes from the Ultimate Game Master

Andrzej Sapkowski likes to splash. He comes across as a self-righteous, arrogant megalomaniac  but is it right? Maybe he's actually a misunderstood bard? Or maybe both conclusions are true? Or none?

How The Witcher franchise mixes fantasy with modern world?

The universe of The Witcher may seem like your regular, almost generic, fantasy world  give it a second thought, though, and youll find this world to be quite unique. But how was this achieved?

The Witcher 3: Blood and Wine Game Guide is also available in our Mobile App