This quest is unlocked after completing the main quest What Lies Unseen (visiting the Unseen Elder's lair) or Beyond Hill and Dale (finding Syanna in the fairy land). In this quest you will meet Dettlaff in the titular Tesham Mutna ruins located in the southern part of map (M5,6). Depending on Geralt's previous decisions, the encounter can play differently. In general, it can end with combat with Dettlaff who in that case is considered as the final boss of the expansion pack, or it can end with walking away without fighting. All possible options are described below. 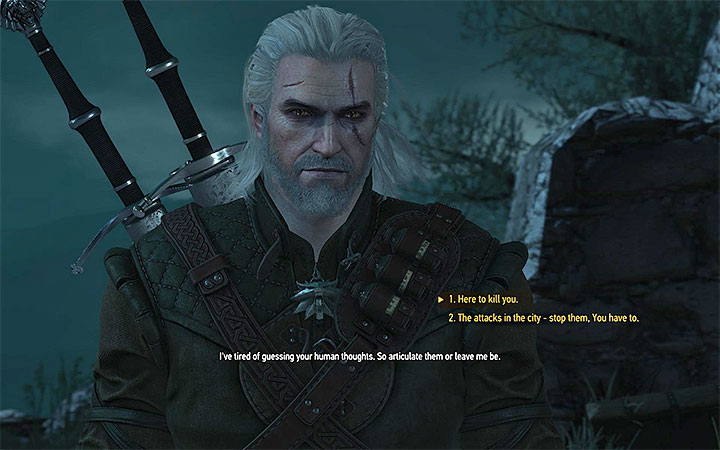 Both dialogue options lead to the encounter with Dettlaff

This option is available if previously you have completed the main quest What Lies Unseen - you visited the lair of the Unseen Elder and with his help you summoned Dettlaff to Tesham Mutna ruins. After the vampire appears you will be forced to fight him.

Option B - meeting with Dettlaff after visiting the fairy land; Geralt did not obtain the ribbon for Syanna 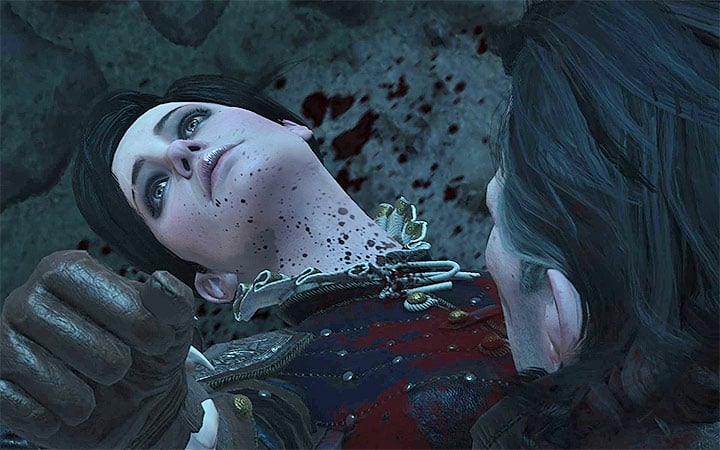 Because Syanna doesn't have the ribbon, she will be murdered by Dettlaff

This option leads to medium game ending and it is available if you completed the main quest Beyond Hill and Dale - you found Syanna in the fairy land. The additional requirement is that while in the fairy land you haven't visited the flint girl who has the magic ribbon. After Dettlaff is summoned he will brutally murder Syanna.

Once it is done, you can decide to fight Dettlaff (the battle is described below) or let him walk away. In both cases the conclusion will be the same - as a punishment for leading to Syanna's death Geralt will be taken to prison in Toussaint and the main quest Burlap is the New Stripe will start.

Option C - Meeting with Dettlaff after visiting the fairy land; Geralt obtained the ribbon for Syanna 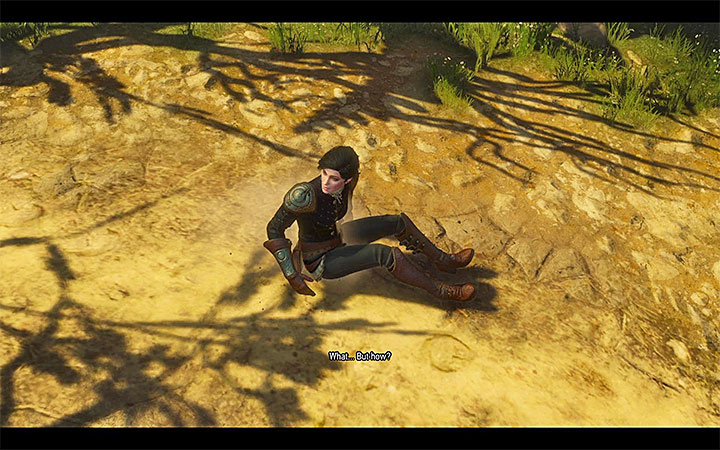 The ribbon will save Syanna from dying

This option is available if previously you completed the main quest Beyond Hill and Dale - you found Syanna in the fairy land. The additional requirement is that while in the fairy land you met with flint girl and you bought or won the magic ribbon from her. The good news is that after Dettlaff is summoned to Tesham Mutna ruins he won't be able to kill Syanna because the ribbon will save her life. The bad news is that you will be forced to fight Dettlaff.

Duel with Dettlaff - the final boss

The battle with Dettlaff will take place if: 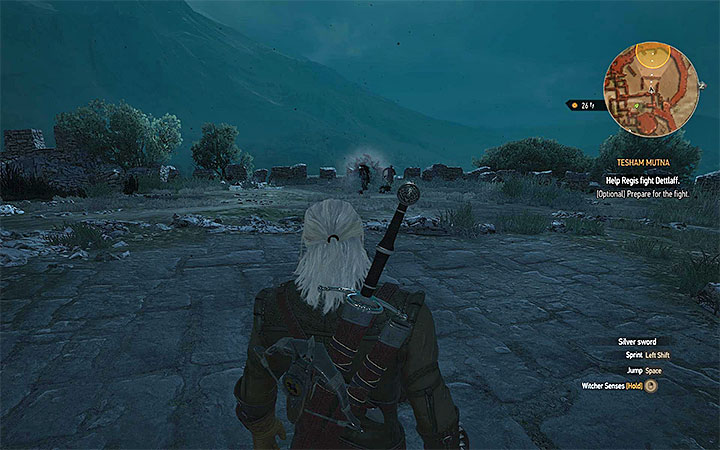 Move only once you're ready

What's very important about the battle with Dettlaff is the fact that the fight won't start until you enter the arena where after the cutscene Regis and Dettlaff will be fighting each other. You can use that to save your game, use vampire oil, equip Black Blood and other useful potions and select the sign for this battle. It is recommended to use Quen which can be used for protection from some attacks of Dettlaff or to set the ground for counterattacks.

After you move forward a cutscene will start during which Regis will be removed from the fight. Because of that Geralt will be forced to defeat Dettlaff without the help of the friendly vampire. 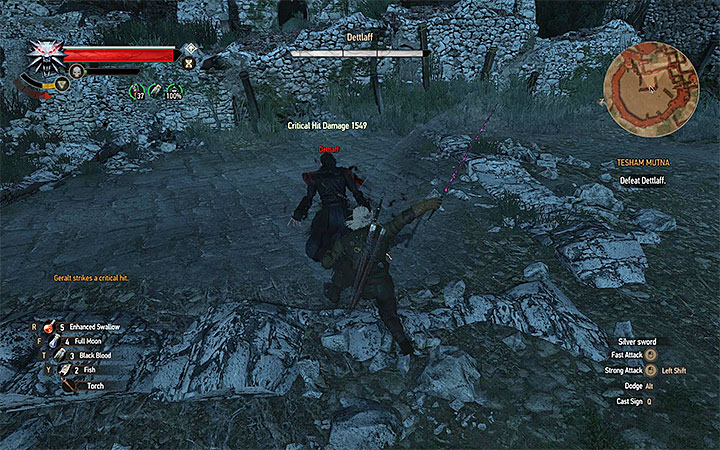 You can parry Dettlaff's attacks and then perform your own

The first part of the duel is the simplest one, but it doesn't mean you can't watch out during it. Try completing it without using potions and other valuable supplies, they will be much more needed later. Start with moving through the arena and waiting for opening to weaken Dettlaff. You can perform 1-2 quick attacks after his failed attempts or look for opportunities to parry his attacks (for example the stronger one). It will make him lose the balance and will give Geralt a chance to deal some damage to him. Optionally you can switch to Igni for this phase of the battle. Successfully using this sign can temporarily leave Dettlaff vulnerable to sword attacks.

After Dettlaff losses about 1/4 of health a short cutscene will start during which Dettlaff will transform into a flying creature. It will be a signal to start the second phase of the battle. 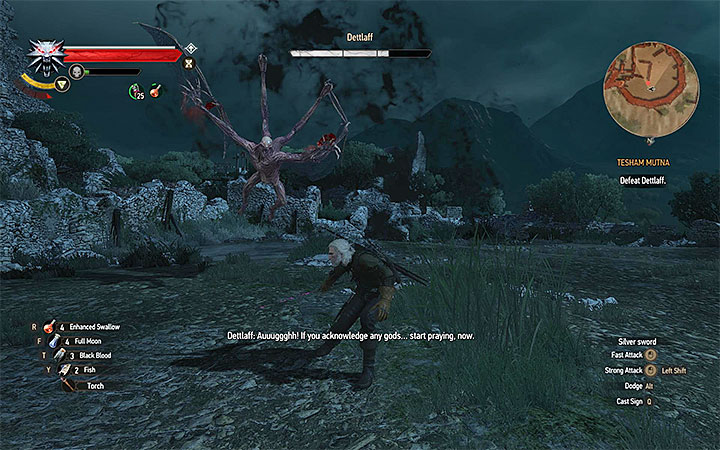 The second phase of the battle is the hardest and once you reach it you must change your tactics completely. While in the flying beast form, Dettlaff will obtain a few new abilities which you should learn very well. The first one is the attack from the air. It is fast, but the boss signals it very clearly and it will give you a chance to jump away. If you feel strong enough, you can use Aard when the boss ends his attacks. This action must be performed with perfect timing to succeed. If it does succeed, then Dettlaff's attack will be stopped and he will be taken to the ground. 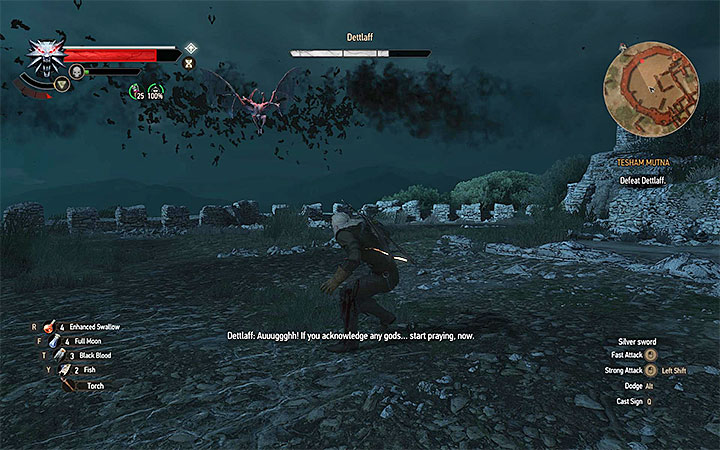 Prepare yourself well for the airstrike of the bats

The next ability of Dettlaff is very dangerous. He is able to summon a group of bats and then send them at Geralt. You must react to these attacks correctly or otherwise Geralt will lose plenty of health points or he will die. Don't count on Quen shield to save you from the bats. When you notice the boss summoning the bats, move quickly to the opposite end of the arena. Jump to the side only after the bats start flying towards Geralt and they are nearby. You can't move away too quickly or too late. 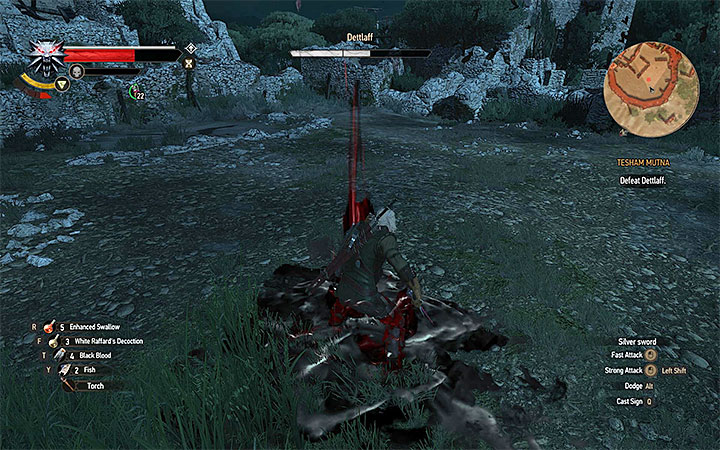 Don't get too close to the pillars of blood

Further in this phase of the battle on the arena some pillars of blood will appear on the arena. Don't get close to them - Geralt can be imprisoned inside and in addition to receiving damage he will become vulnerable to Dettlaff's other attacks. 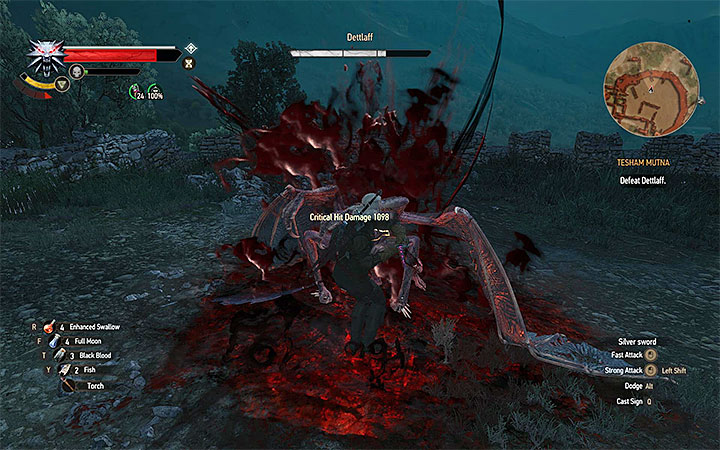 You should attack Dettlaff only when he lands on the arena - an example situation like that is shown on the above picture. When that happens, try performing the strongest attacks, but don't overdo with their number - 4-5 should be enough. Jump away from Dettlaff after finishing the combo and prepare to defend from new wave of his attacks (described above). 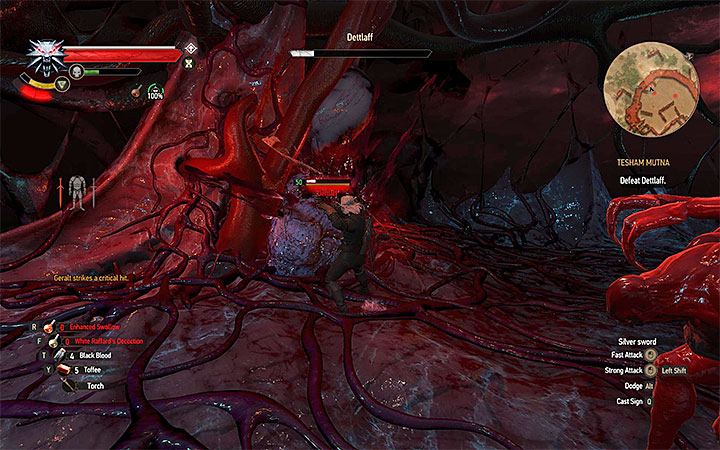 You won't miss the moment when the third and final phase of the battle starts. Geralt will destroy Dettlaff's wings and he will be moved to a new arena which looks like insides of a giant living organism. During this phase you should perform as many dodges as possible and keep away from Dettlaff. Don't attack him. Instead of that, look for opportunities to hurt the large organs on the edges of the arena - one of them is shown on the above picture. 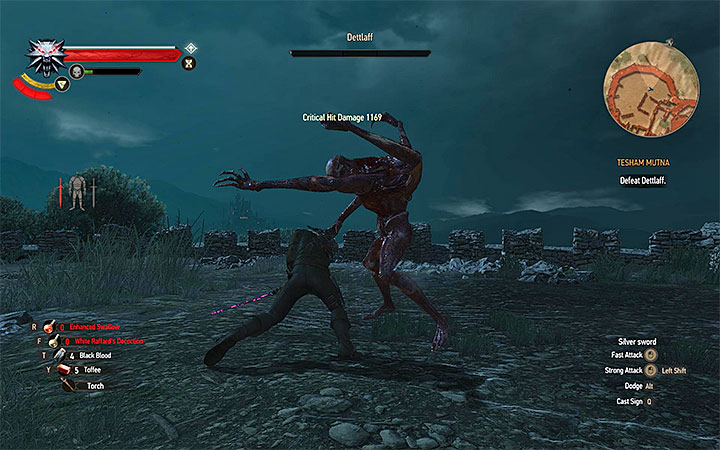 At the end you must finish Dettlaff

Perform 2-3 attacks after getting close to an organ (before Dettlaff reaches Geralt) and immediately move to the next one. Remember to have Quen sign active in case that Dettlaff manages to reach and attack you in time. Destroying all organs will take away the rest of Dettlaff's health. All that's left for you to do is to run towards him and finish the vampire. New cutscenes will be triggered (Regis will finally finish Dettlaff) and after watching them all you will start the new main quest Pomp and Strange Circumstance (this will happen in all variations).