This quest will be unlocked only if you completed the main quest Blood Simple - you decided to meet with Orianna and help her in finding the beast responsible for the massacre in the orphanage. At the end of this quest Geralt will receive all information needed for finding Unseen Elder lair from Orianna. Additionally, during the conversation with Regis the protagonist must decide not to follow his idea to find Syanna. Instead of that, Geralt must focus on meeting with the Unseen Elder (the first dialogue option in the conversation with Regis).

Go to the Unseen Elder's lair 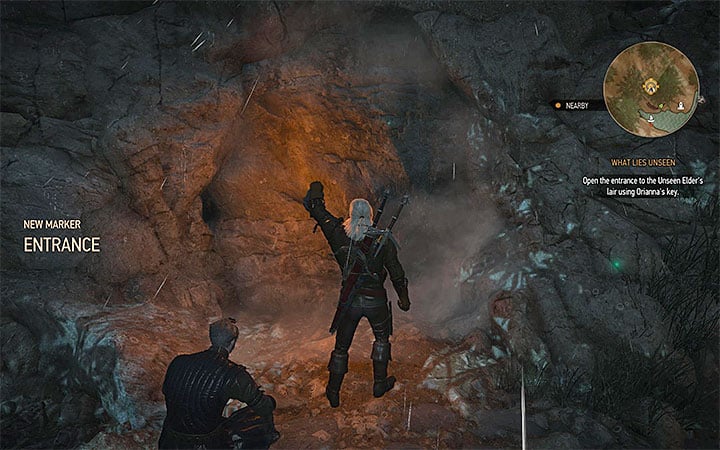 The lair of the unseen Elder is a cave located at the lake southwest from Beauclair (M4,20). The quest will start on a boat from which you can quickly get near the cave. Leave the deck, reach the upper ledge where you should find Regis. Use the magic key received from Orianna to unlock the entrance to the cave shown on the above picture.

Start the linear march through the cave. Be ready to defeat one or a few vampire creatures on your way. The destination is a large cave - the lair of the Unseen Elder. Here you will have to decide what your attitude towards the Unseen will be. No matter what you choose, the powerful vampire will attack Geralt and after leeching his blood will throw him to the lower part of the cave.

Finding a way to conciliate the Unseen Elder 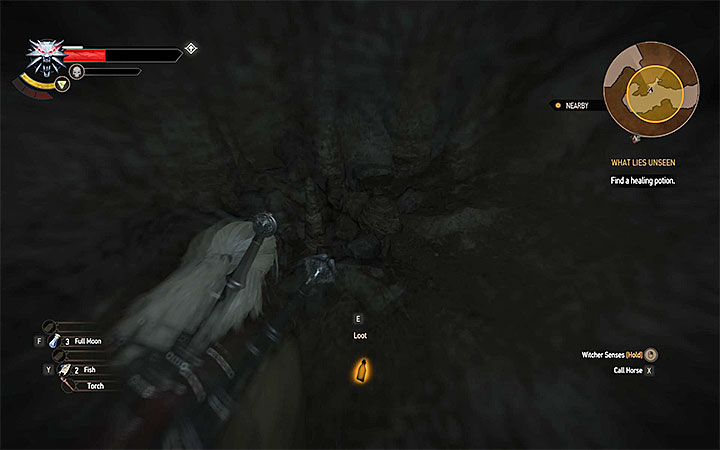 You will find Swallow near the place where Geralt landed - it is shown on the above picture. Open inventory and decide to drink it.

Collect the items and gear you lost as you fell

This is an optional objective, but you shouldn't skip it as all items you used until now were probably very valuable. You must find crossbow, steel sword, silver sword and potions which Geralt had placed in active slots of the inventory before encountering the Unseen Elder. 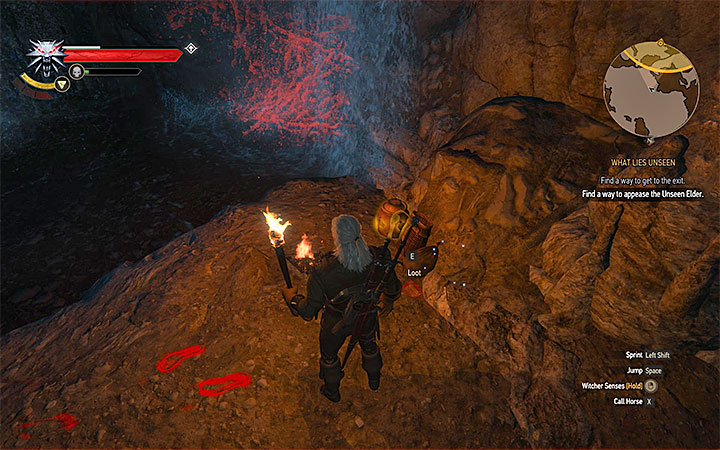 Move to the nearby chamber and explore it thoroughly. In the place shown on the above picture you will find a camp of a mage. Examining it will provide you with Mage's notes. You should read it immediately. Then find the footprints of the mage and follow him. You must be prepared to face some vampires on your way - among them there will be stronger protofleders. The footprints will lead you to a damaged megascope and scattered books with more Mage's notes. 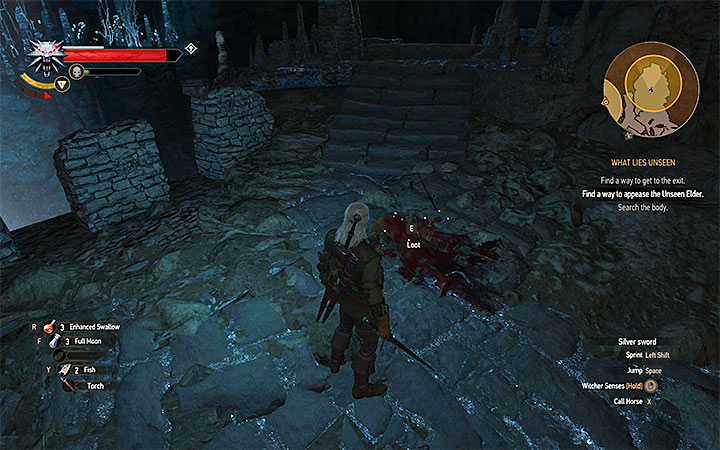 Walk slightly further in order to watch a cutscene. This time you find yourself at the ceiling of the cave. Despite the change of orientation the general rules won't change, so use Witcher Senses to find more footprints and continue the journey. The corpse of the mage will be found in the place shown on the above picture. Examine it and take the Crumpled letter. Reading it will allow Geralt to determine that you can give a gift to the Unseen.

Find a gift for the Unseen 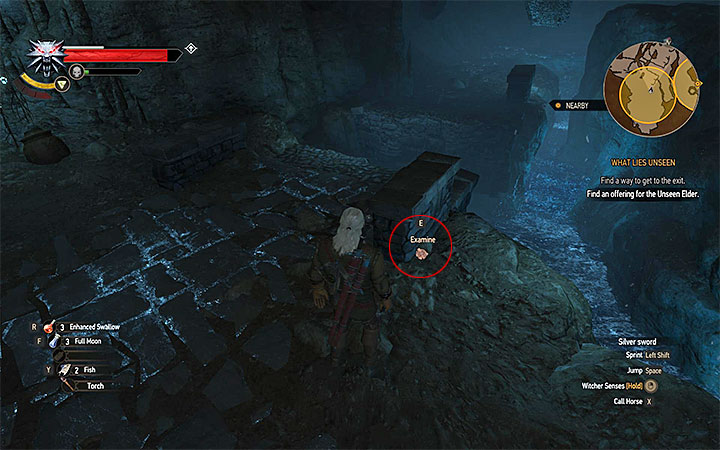 Offering for the Unseen Elder can be found not far from the place where you found the letter written by the mage - its precise location is shown on the above picture.

Find a way to get to the exit 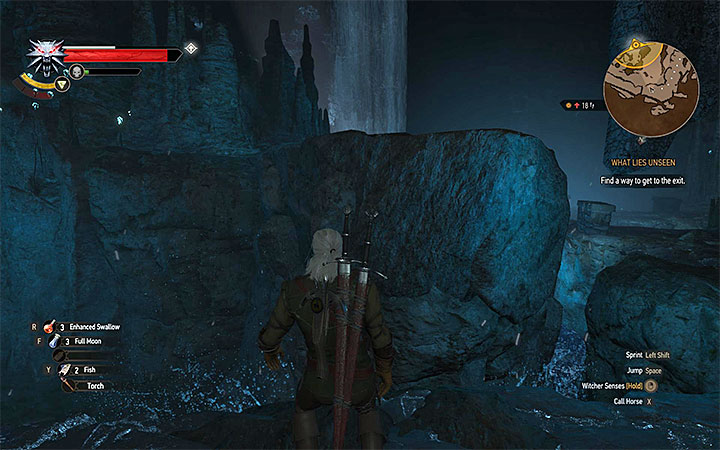 Remain close to the place where you found the gift. You must jump to the slightly higher ledge shown on the picture. Once you do it, walk through the narrow path to the unstable rock. Use Aard sign to destroy it.

Jump into the water

This is a very simple task. Walk towards the waterfall shown on the minimap and jump towards it. You will be moved to the part of the cave where you began.

Important - Don't jump into the water if you haven't destroyed the caves yet. Otherwise you will have to walk through the whole cave again in order to reach the place where you can use Aard sign.

Talk to the Unseen Elder 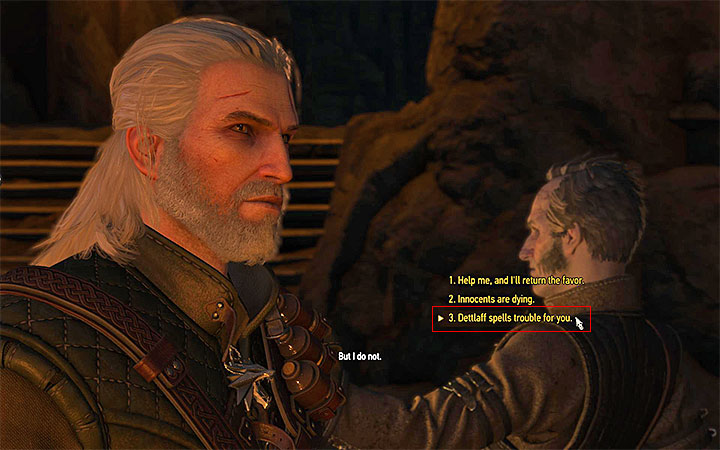 Climb on the higher ledge once you reach the new part of the cave. Then start the march towards the lair of the Unseen Elder. Enter his lair again and start a new conversation. During the conversation YOU MUST select the third dialogue option shown on the above picture. Thanks to that Geralt will convince Unseen that Dettlaff is a threat to him. If you select a wrong dialogue option twice (the first one and then the second one or the second one and then the first one), irritated vampire will automatically kill Geralt.

You won't have any serious impact on the rest of the meeting with the unseen Elder. The action will soon move to Tesham Mutna ruins (M5,6) and a new main quest Tesham Mutna will start there.