This quest is extremely important. While completing it Geralt will have to make the first decisions that will impact which ending he will unlock. In this chapter you will find information about all available branches. Information about actions required for unlocking specific endings can be also found in separate chapter of the guide. 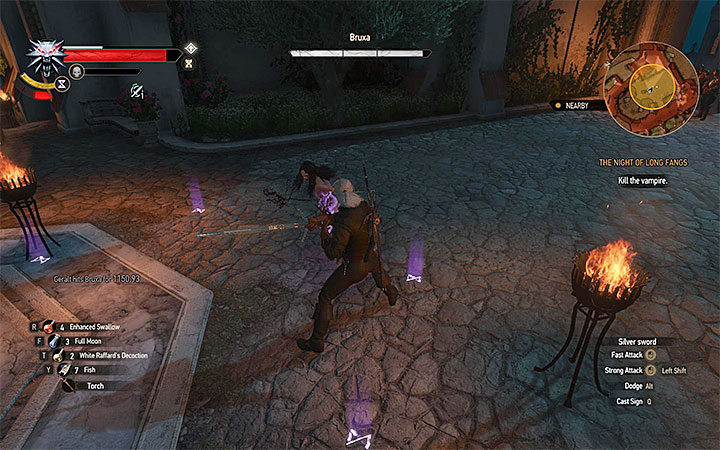 Attack Bruxa and help yourself by using Yrden sign

This quest will start with a conversation with Anna Henrietta in Palace in Beauclair (M4,14). You won't have much impact on how the talk will go. Soon one of the knights will appear and inform everyone about vampires' attack on Beauclair. The first vampire to defeat will appear now - it will be a bruxa. You should be familiar with tactics required for this battle. Use vampire oil on your sword and equip yourself with Black Blood potion. When the battle starts, regularly jump away so that the vampire won't be able to catch you by surprise. Use Yrden sign and wait for bruxa to appear inside the magic circle. When that happens, start attacking her with sword - your attacks will deal massive damage to the weakened vampire.

Speak about the possible options with Regis after winning the duel. You don't need to make the final decision about the further actions yet - the final confirmation will be reaching the specific part of the attacked city and completing actions related to it. Possible options are as follows:

Option A - Obtaining information about the Unseen Elder from Orianna

Ask Orianna where to find the Unseen Elder

Important - selecting the option to meet with Orianna in order to speak with her about the Unseen Elder will lead Geralt to unlocking the bad ending of Blood and Wine expansion pack. However, at this point it won't be an irreversible choice and later you will be able to perform actions that will lead you to unlocking one of two remaining endings. Warning about the final decision that determines the bad ending can be found at the end of the walkthrough for Blood Simple quest. 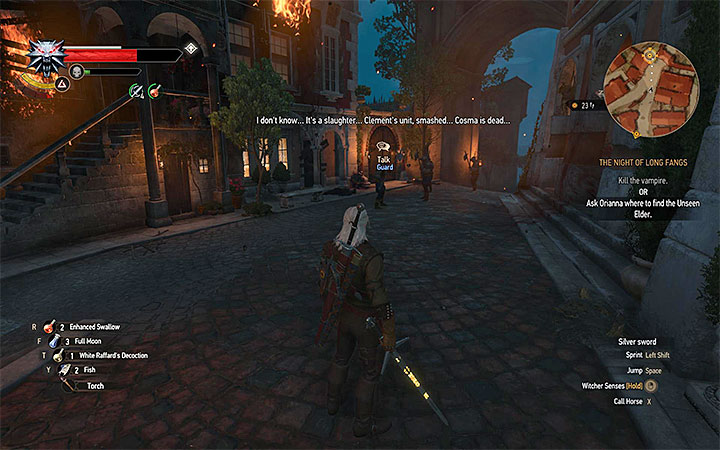 Your destination is Orianna's mansion located in southeastern part of Beauclair (it's the same building which you visited earlier when Orianna organized a party). The road to Orianna's mansion leads through the city and it is linear because the side alleys are blocked with flames, barricades and similar obstacles. During the journey through the city you must be ready to face some vampires - bruxes, alps, garkains, fleders. If you want to gain experience, you can fight them. In that case remember about using vampire oil and Black Blood (you can also check descriptions of enemies in the bestiary in your journal). If you don't want to fight them, then escape from them or use minimap markings to sneak pass them while keeping distance.

On the way you will bypass the small courtyard related to option B (finding Damien) - since you're focused on option A, you can ignore it. Your destination is Orianna's mansion (M4,16). After reaching the destination a scene of meeting with Orianna will start. The woman won't want to tell you the location of Unseen Elder unless Geralt helps her. You will help her during the Blood Simple quest (now you should skip to walkthrough for that quest in this guide).

Option B - Asking Damien about where Syanna is being kept

Find Damien and ask him where Syanna is being kept

Important selecting the option to met Damien in order to ask him about Syanna's whereabouts doesn't mean that you will lose access to one of the endings of Blood and Wine expansion. Due to decisions made in further quests Geralt will be able to unlock any ending - the bad, medium and good one. 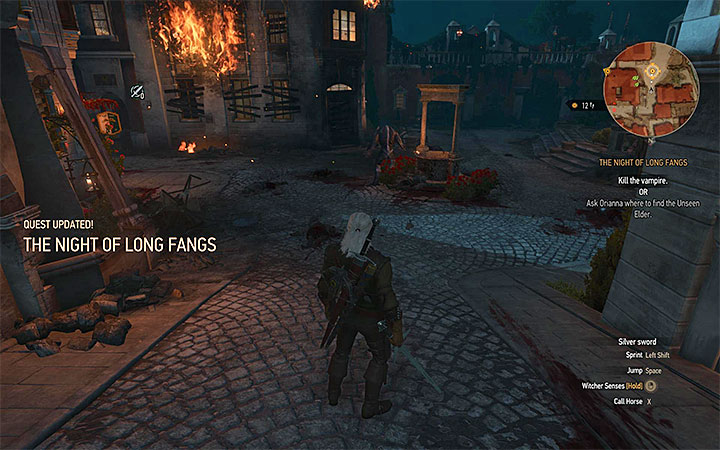 The courtyard to which you must get

Your destination is the small courtyard located in the western part of Beauclair. The path that leads there is very linear because access to side alleys will be blocked by flames, barricades and other obstacles. During the journey through the city Geralt will encounter vampires of various types - garkains, fleders, alps and bruxes. If you want to gain experience you can fight them. In that case remember about using vampire oil, Black Blood potion and Yrden or Igni sign (you can check descriptions of monsters in the bestiary). If you don't want to fight them, then it is better to escape from them and use the minimap to sneak by them from distance.

You must eliminate a vampire from the fleder genre. It isn't a very requiring monster, but watch out for its long jumps combined with attack performing. Vampire Oil and Black Blood elixir will be helpful in winning. In addition to that, use Igni or Quen sign.

Use your Witcher senses to track down Damien 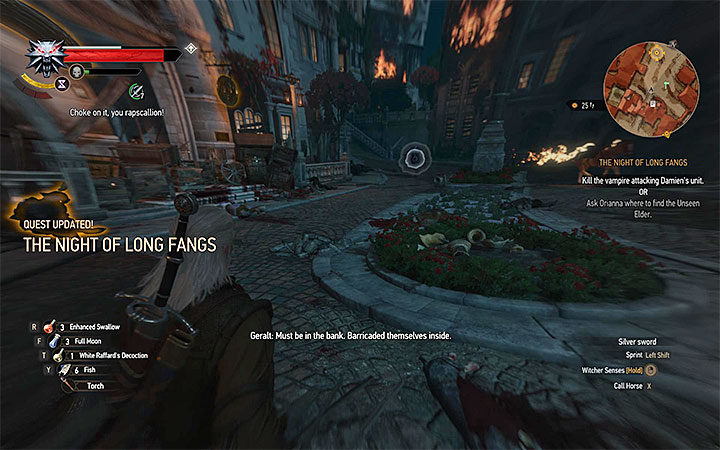 Get near the bank

Activate Witcher Senses after winning the battle. Watch the dead guard and the blood trail. Follow the latter. You will pass nest to a small cart which you can check. The trail will lead you near the Cianfanelli Bank at the main market. There you must deal with another fleder who endangers the knights that are there. After killing the vampire you will speak with Damien from whom you will learn that you must look for Syanna in the child room in palace.

Important information - If previously you selected option A, then you can examine the child room only if during the conversation with Regis in the final part of Blood Simple quest you agree to his suggestion and resign from finding the Unseen Elder. In that case the What Lies Unseen quest will be skipped. If you selected option B, then you can focus on further steps with no setbacks or complications.

It's a very simple task. Walk towards the birds on the balustrade and interact with them in order to summon Regis to the palace. Go towards the Palace in Beauclair (you will have to avoid or defeat some vampires on your way) in order to meet with Regis there.

Search the playroom to find out what happened to Syanna 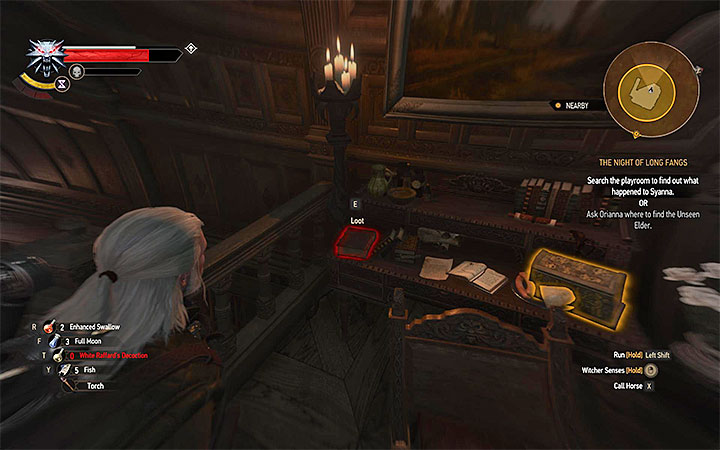 Walk towards the closed door leading to the building and wait for Regis to open it from inside. You won't find anything interesting on the ground floor, so go immediately to the first floor. You must find the Journal shown on the above picture and read it (select the titles from the list).

Find the book "The Land of a Thousand Fables" 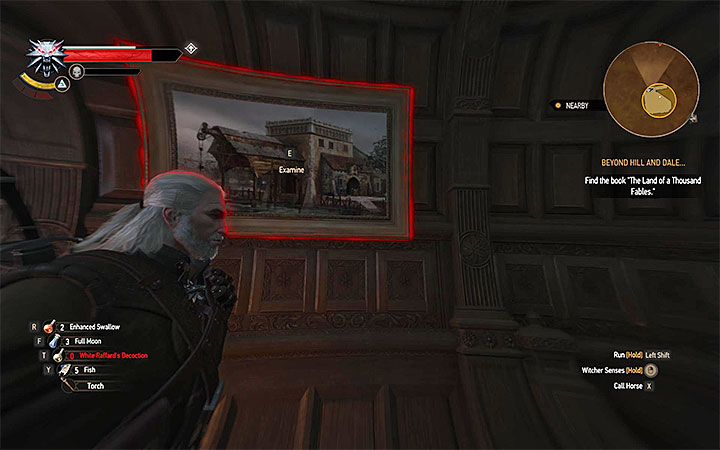 This time you must take interest in the large painting hanged on the wall and shown on the above picture. Behind it you will find Golden key. Use that key to open the closet inside which there is the book you are looking for. After taking it Geralt will be transported to a fairy realm and he will start a new main quest - Beyond Hill and Dale... (now you should skip to walkthrough for that quest in this guide).