VERY IMPORTANT! Playing this quest equals starting the final part of the main plot of Blood and Wine expansion pack. This will lead to some irreversible consequences related to, among other things, battles that will start in Beauclair. The direct effect of that will be that you won't be able to complete most side quests (the treasure hunt quests are exception). Try completing the following activities BEFORE you start this mission: 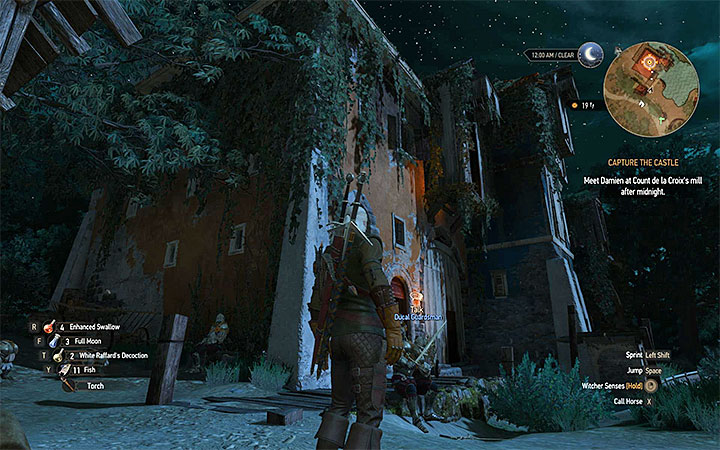 Count de la Croix's Mill is located not far to the east from Tourney Grounds (M2,16). Remember that you must get there during night. If needed, use meditation or the bed in Corvo Bianco in order to speed up time. Meet with Damien de la Tour in order to participate in the conversation about planning the siege of the castle.

After watching all cutscenes you will be automatically moved to the northern part of Dun Tynne Castle (M3,11). The battle with the first group of guards will start. It isn't hard, but try not to use the potions or other supplies you have - they will be useful later. Once all enemies are eliminated, go to the next part of the castle. If possible, stick to the path shown on the minimap - by doing so you will avoid additional, unnecessary battles.

Defeat Roderick and his men 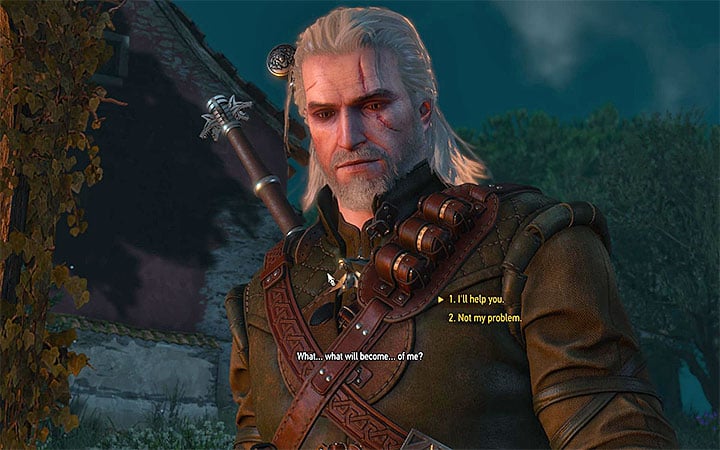 Soon you will get near Roderick and a new group of guards. Don't move to him too early - let the enemies get to Geralt. Eliminate them one after another and try quickly reaching the archers. Leave Roderick for the end - he will get off the vehicle after you get close to him. The duel with him isn't much harder. Once the fights are over, a cutscene of conversation with the defeated opponent will start. After asking him all questions you can show mercy to him and help him or leave him to his fate. 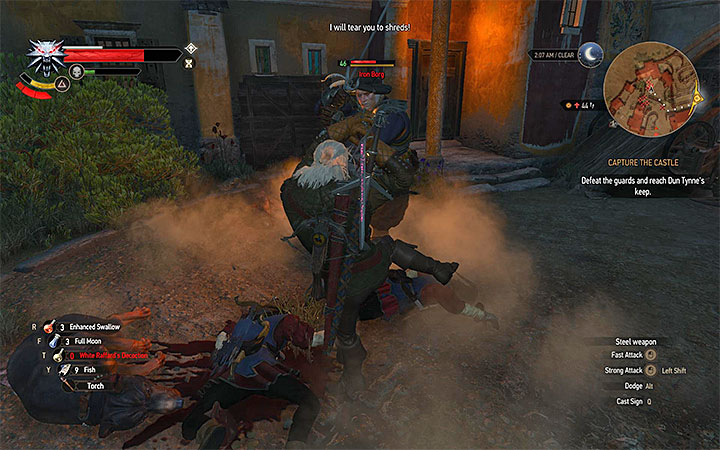 Watch out for the opponent with a giant two-handed sword

Keep moving. In one of the next areas Geralt will be attacked by a group of slightly stronger bandits supported by guard dogs. During the battle with the members of that group you must watch out especially for Iron Borg. This opponent is using a giant two-handed sword with which he can deal massive damage. It is best to leave this opponent as the last to defeat. Look for openings to perform fast attacks after failed slow attacks of your enemy (for example after hitting the ground with great strength).

Resume the march after eliminating enemy forces. Get rid a few weaker enemies on your way. Soon Regis and Dettlaff will appear in the castle. Go with them towards the perch. You don't need to fight the last encountered enemies - your vampire allies will eliminate them immediately. Once you reach the perch, a few cutscenes will start - meeting with Rhena/Syanna, arrival of Anna Henrietta (you can defend Roderick if you want) and return to Beauclair. The game will automatically start the next main quest, The Night of Long Fangs.