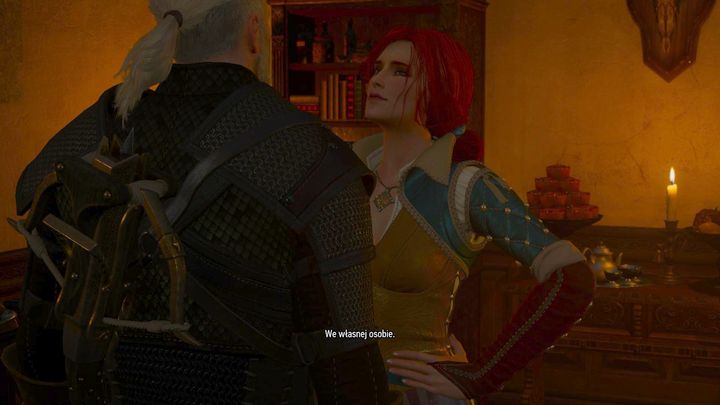 One of the available epilogues - Geralt is visited by Triss

You can unlock one of three main endings in the second story expansion to The Witcher 3: Wild Hunt - bad, medium and good one. The endings differ from each other not only in dialogue lines and cutscenes, but quests and related scenes as well. The decisive point which impacts further events in the game is the quest The Night of the Long Fangs in which vampires attack the city. This is where you make the first important decision which will lead Geralt to one of the endings of the game. In that quest Geralt can go to Orianna and found the Unseen Elder thanks to information from her (main quest Blood Simple) or he can focus on finding Syanna in the fairy land (main quest Beyond Hill and Dale). No matter which of the above quests you selected, you will have an opportunity to unlock the bad ending (both sisters die). The medium and good ending (death of Syanna or reconciliation of sisters) is available only if you play the Beyond Hill and Dale main quest.

Independantly from the events described above and the ones on the further page of the guide, the short epilogue after one of the endings can differ as well. The events shown at the end will differ depending on with whom you have romanced in the basic version of the game and how did the story of Ciri ended. Below you can see a list of available epilogues: