This quest is very unusual, in that to a large extent, you have to complete it still before you accept it. At the same time, you can make things much more difficult for yourself, if only you do not make the right decisions during other quests. It a good idea to accept this quest early (preferably, right after you travel to Toussaint) and keep track of your progress on a regular basis. The trials are completed by means of taking the right decisions during the game. 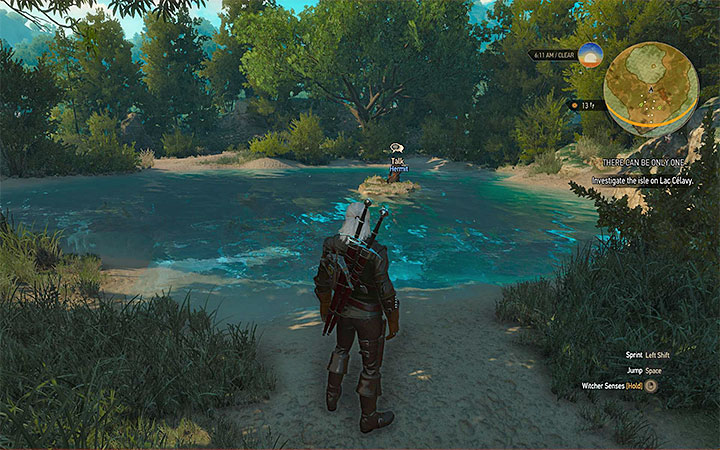 This is where you find the hermit

You can learn about this quest by checking out one of the notice boards in Toussaint. Alternatively, you can head towards Celavy lake straight away. It is in the Western part of the principality, North-Westwards of Tourney Grounds (M2,14). Reach the islet in the middle of the lake and meet the Hermit.

From him, Geralt will learn about the five Trials of Virtues. From now on, you can perform actions connected with the trials. The only exception is a situation, in which you have already performed all of the actions required by the quest. In such a situation, you can move on to the last phase of the quest - fighting the hermit.

Note - there are several ways, in which each of the trials can be completed. In such a situation, all you have to do is perform one of the example actions described below, which results in completion of such a trial. 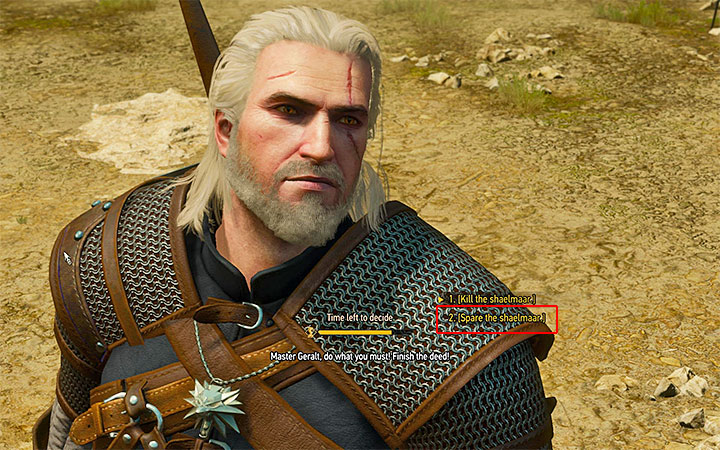 You can complete this trial at the very beginning of the game, i.e. while completing the first quest of the expansion (The Beast of Beauclair). In the course of that quest, you will have to fight Shaelmaar in an arena. After you defeat the monster, do not kill it and spare its life instead (the second dialogue option). 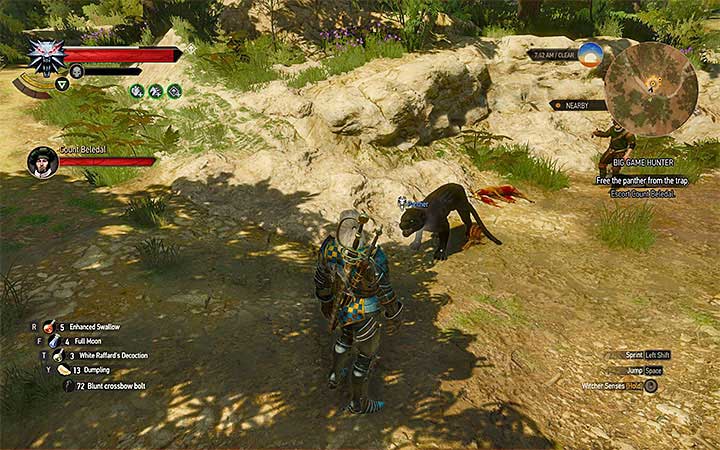 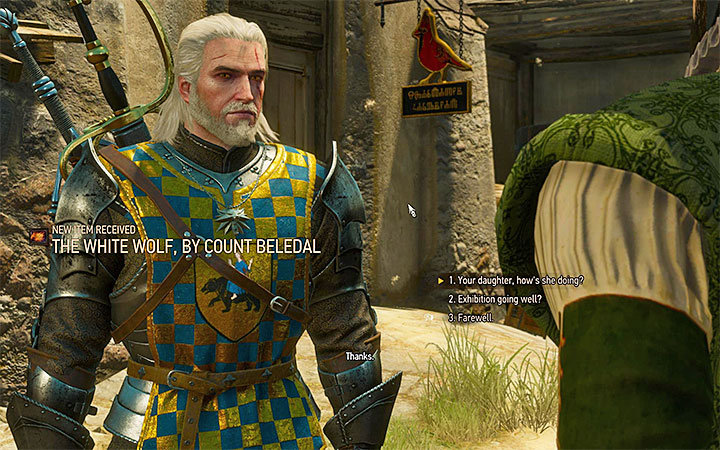 The two key moments are freeing the panthers and mentioning Beledal's daughter, while talking to the count

Another opportunity to complete this trial appears during the Big Game Hunter contract. At the very beginning of this quest, Geralt and Beledal are searching for the lair of panthers. Reach the area, where you find a trapped panther. You have to soothe the animal down, using Axii sign, and free it. After you return from the hunt, talk the count's people and accept Beledal's invitation to the picnic. Go there, talk to the count and ask about his daughter. 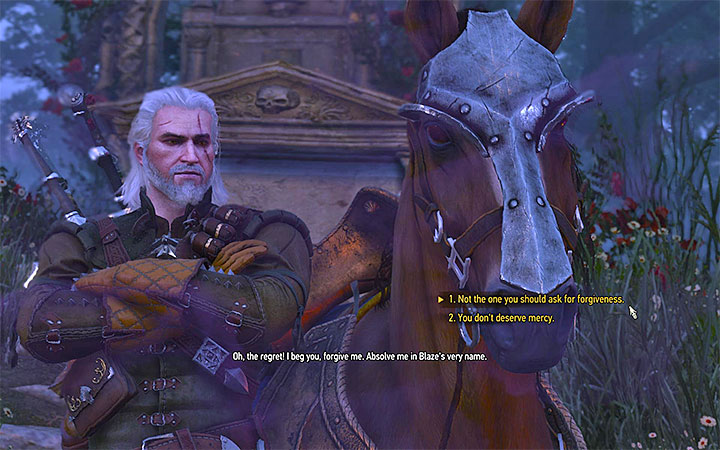 You can ask Roach to forgive the ghost of the knight

The next occasion for completing the trial of compassion is meeting the Umbra during the Witcher Contract Equine Phantoms. After you reach Umbra you must ask Roach to forgive the ghost of Marcell Clerici in the conversation - it is the first dialogue option. 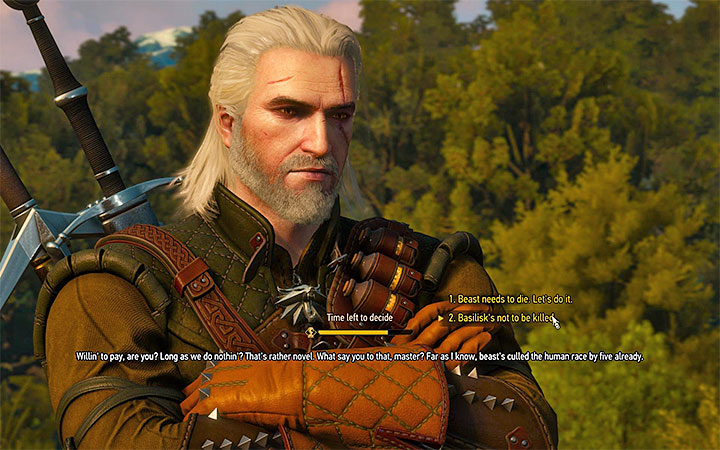 Another chance to complete the trial is during the Witcher Contract Mutual of Beauclair's Wild Kingdom. During this quest Geralt will encounter count Bories di Salvaress who will ask him not to kill a silver basilisk because the creature is the last of its kind. After Geralt meets a group of Reavers you can select the second dialogue option and convince the hunters to not hunt the basilisk. 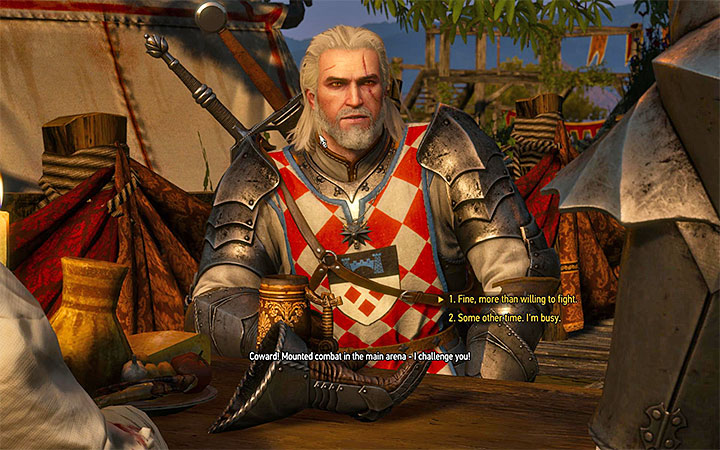 Agree to a mounted fight with Anseis

You can complete this trial after you enter the tournament at Tourney grounds during The Warble of a Smitten Knight side quest. While entering the tournament, decide to give your actual name (Geralt of Rivia). Later into the quest, you will be challenged to a mounted fight, by Duke Anseis. You have to agree and win. 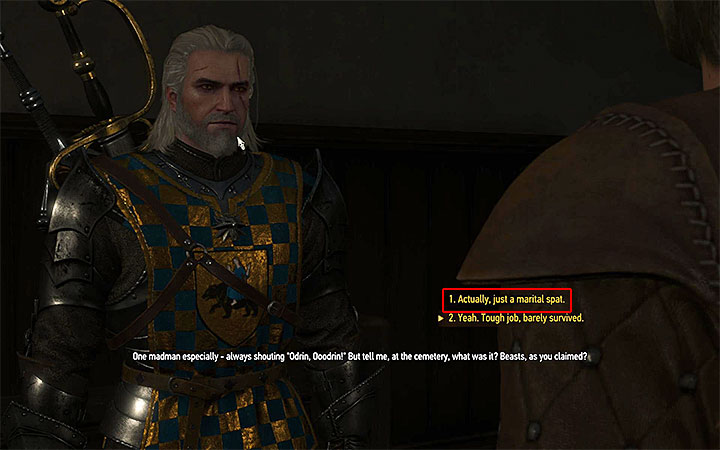 Tell Charles the truth about what happened at the cemetery

Another way to complete this trial is to start Till Death Do You Part side quest. In this quest, you have to find out about strange noises coming from the cemetery. Geralt will have to reconcile two spirits- Luisa and Margot, by carrying over one of the urns elsewhere. Towards the end of the quest, you have to meet with the quest giver - Charles Lanzano and tell him about what has happened at the cemetery (the first dialogue option). 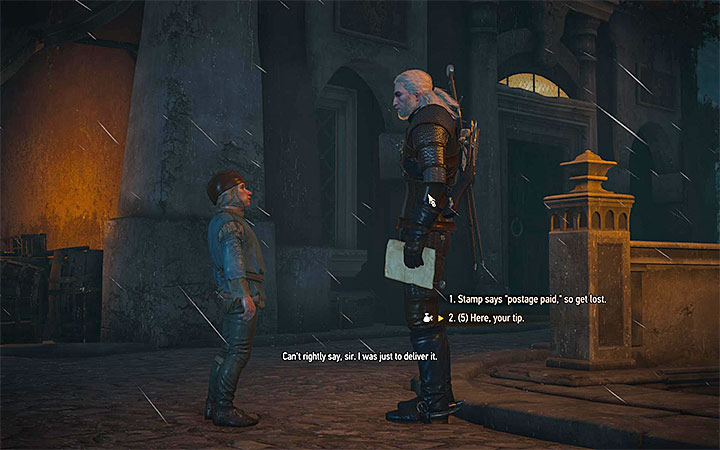 Give money to the envoy

It is easiest to complete this trial while you are in Beauclair, at the initial phase of the game. Geralt will be accosted by an envoy with a letter that unlocks Turn and Face the Strange side quest (the one connected with mutations). You can reward the envoy with 5 coins. 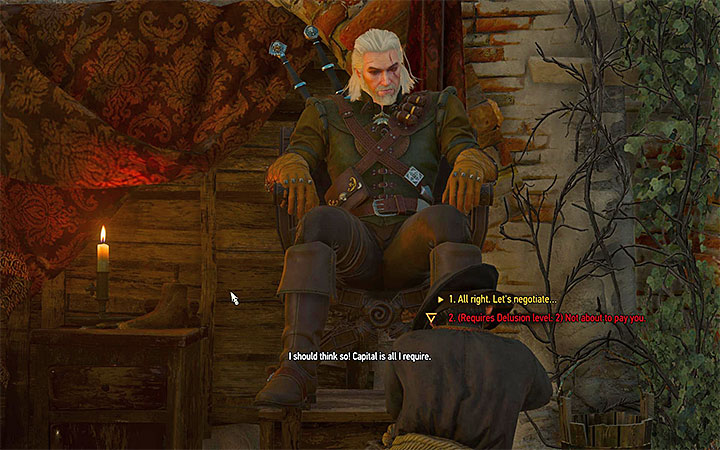 You can give 500 coins to the shoeshine

Another opportunity to complete this trial appears during Where Children Toil, Toys Waste Away main quest. In the quest, you meet a shoeshine, who demands 500 coins for information about Dettlaff. Do not negotiate the price and do not use Suggestion on him. Instead, give him as much as he wants. 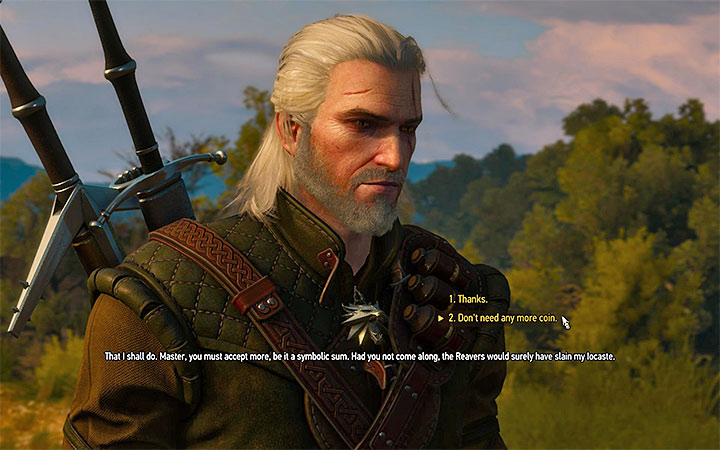 Don't take the additional gold from the count

You will have another chance to complete this trial during the Witcher Contract Mutual of Beauclair's Wild Kingdom. During this quest Geralt will encounter count Boriesa di Salvaressa who will ask him not to kill the silver basilisk because he is the last of its kind. After Geralt meets a group of Reavers you can select the second dialogue option and convince the hunters to resign from hunting the basilisk. Wait for the reavers to walk away and speak with count again. In addition to the regular payment he will want to give you a bonus, 50 crowns. You must refuse and tell him to give the gold to the families of murdered merchants - it's the second dialogue option. 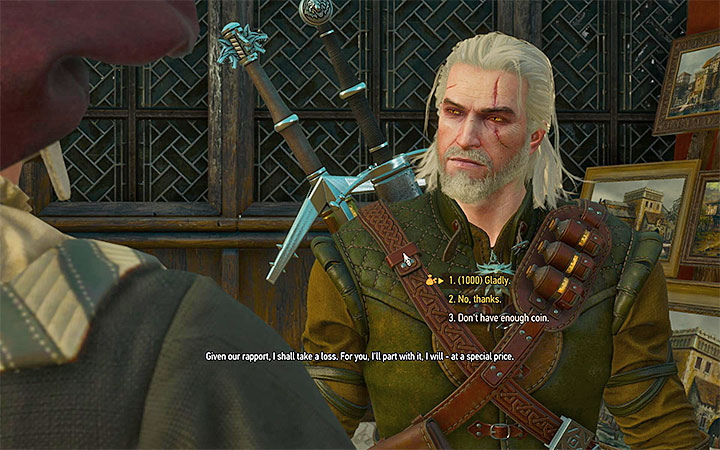 Buy Geralt's portrait from the merchant

Another way to complete the trial is to participate in the side quest A Picture of the Witcher as an Old Man in which Geralt has his portrait created. You must complete the whole quest. Once it is done, meet with the painter on the market in Beauclair. After watching the portrait (you can comment the final effect of the work in any way you want) you must buy it for 1000 crowns. 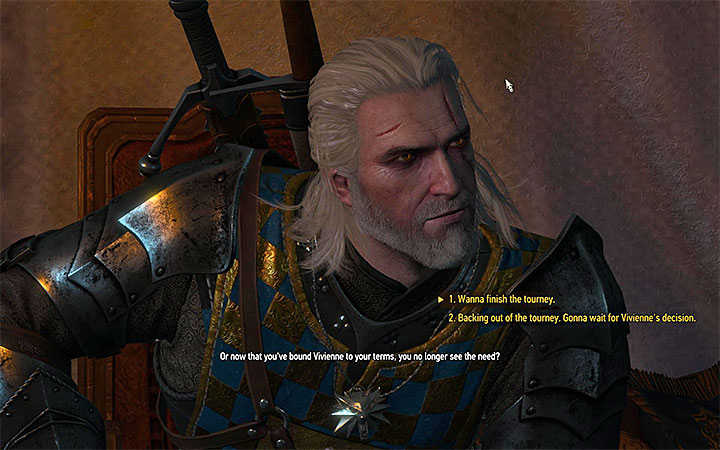 You can complete this trial after you enter the tournament in Tourney grounds during The Warble of a Smitten Knight side quest. In the course of the tournament, you will have to choose whether you should continue with the tournament, or lift Vivienne's curse. Decide to continue. You have to reach the finals in the tournament and defeat Gregoire de Gorgon. Your victory will be confirmed by means of your receiving a unique sword. 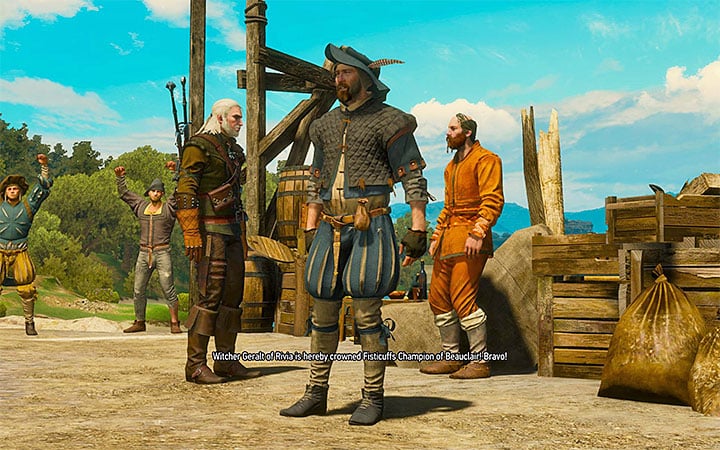 You have to defeat the fist fight champion in Beauclair

You get another opportunity after you start side quests concerning fist fights in Beauclair. First, you have to defeat three regular contestants in Fists of Fury: Toussaint and then, defeat Maestro during quest Raging Wolf. 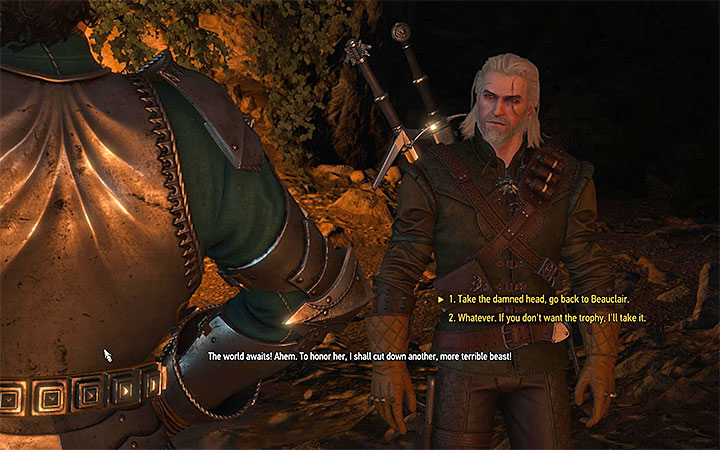 Send Francois to his fiancée with the grottore trophy

The next chance to complete the trial is at the end of the Witcher Contract Feet As Cold As Ice. In this quest you must murder the grottore. Once you do it, a conversation with Francois will start. During it you must convince the man not to look for other creatures but instead to return with Grottore trophy to his fiancée. In order to do it select the first dialogue option. 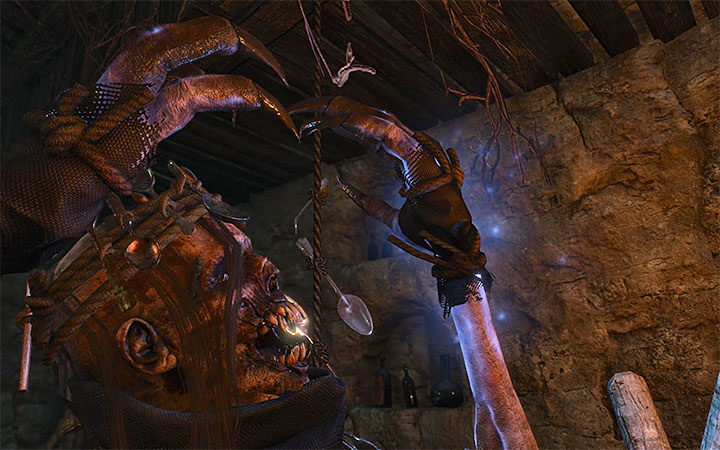 Geralt has to lift the curse from the wight

You can complete this trial during main quest La Cage au Fou. One of the key moments of the quest is when you visit the wight where you have to take all the steps that will lift the curse. Just to remind you, you have to explore carefully the hut, find the church there, hide in the wardrobe and sit at the table with wight. Then, you have to drink the mixture without using spoons and finally, catch up with the wight after the ritual. 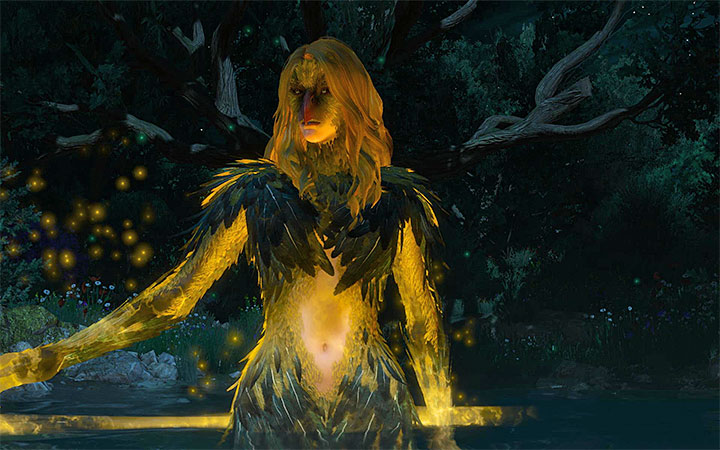 Another way to do this is enter the tournament in Tourney grounds, during side quest The Warble of a Smitten Knight. In the course of this quest, you will have to lift Vivienne's curse. This trial will be completed after you manage to do that. 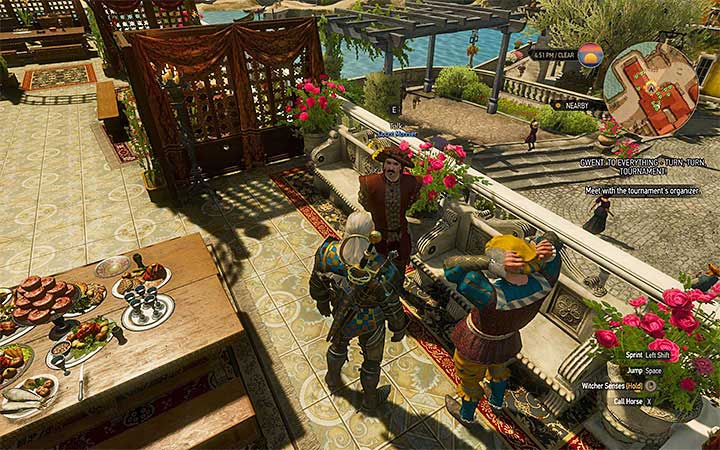 Meet with count Monnier about the tournament

Another way to complete this trail is to take part in the gwent tournament in Beauclair. This is a part of side quest Gwent: To Everything - Turn, Turn, Tournament! which you unlock as a result of meeting with Count Monnier in Beauclair. Geralt has to collect a sufficiently strong Skellige deck and use it to win the tournament. 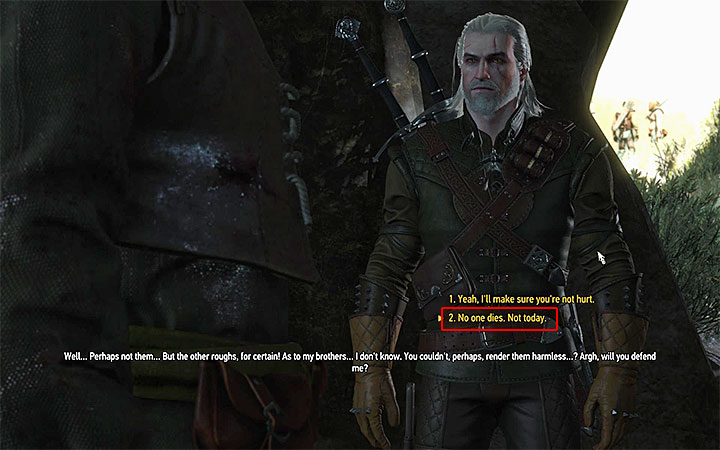 You have to have the brothers reconciled

Another opportunity to complete this trial presents itself during side quest Father Knows Worst, when you have to find a den of monsters to find the missing Hugo. After you are back to the cave entrance with Hugo, you notice his brother accompanied by a group of hunters. You have to pick the second dialogue option, i.e. do not fight the brothers and have them bury the hatchet.

The fight with the Hermit 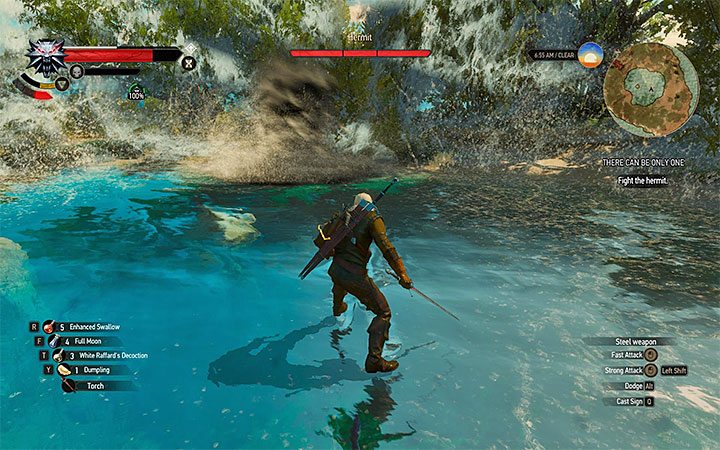 You should especially wary of the tornados

You can fight the Hermit after you have completed all five trials of virtue. It should be added that this is a honorable fight, so it starts only after Geralt agrees to it. The hermit will be attacking you with water attacks. His basic ones are horizontal and vertical water spouts that you can dodge. The most damaging one is the large tornado that can suck you in, if only you let it sufficiently close. Since this would drain your health considerably, focus on steering clear of the tornado and keeping your distance, up until the moment it disappears. 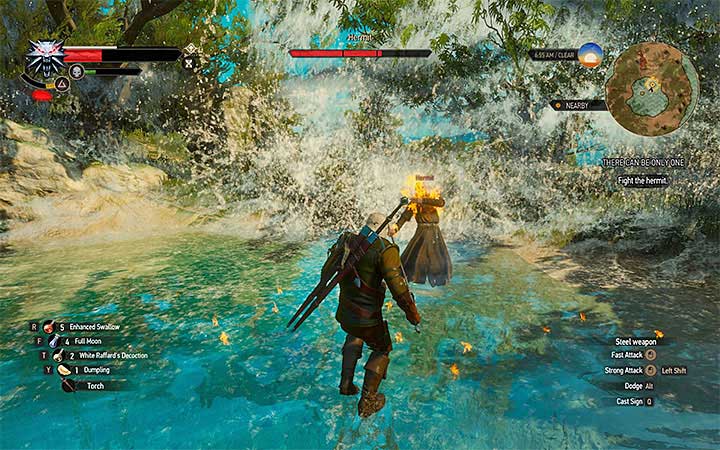 You can deal considerable damage to the hermit with your sword. Apart from that, it is a good idea to use here the element opposing to the one that is being used by the hermit, i.e. fire that is represented by the witcher sign of Igni. In itself, the sign is very effective at draining the opponent's health and exposing him to attacks. 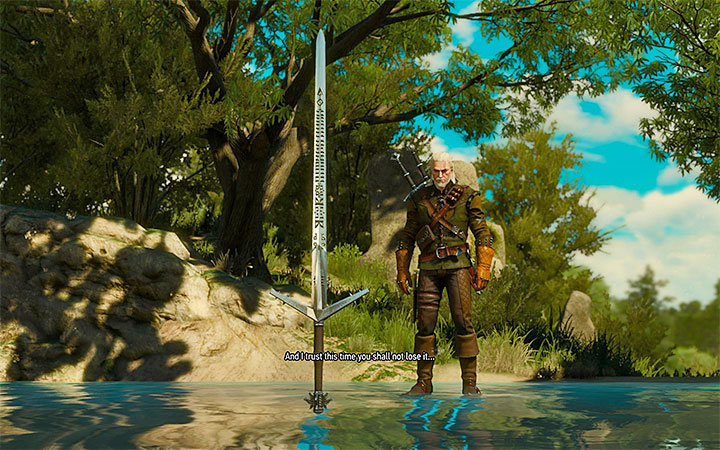 Your reward for the quest - sword Aerondight

For defeating the hermit, you will be rewarded with a cutscene featuring the Lady of the Lake, who gives you one of the best silver swords in the game - Aerondight.