A group of tasks Big Feet to Fill can be accessed after finishing the witcher contract Bovine Blues which involved investigating a strange accident in Ardaiso Quarry and defeating two flying monsters called Slyzards. Once you finish this quest, you can meet the Quarry foreman again (M3,6) and ask him about the new task. Geralt will be asked to help built a gigantic statue of Prophet Lebioda. The main hero will have to find five missing transports with people and materials, and help them arrive to the building site.

Each of the transports has its own, separate mini-quest, and their descriptions are further in the text. Before you start searching for transports, you can visit the building site (M2,9) and complete a side objective. 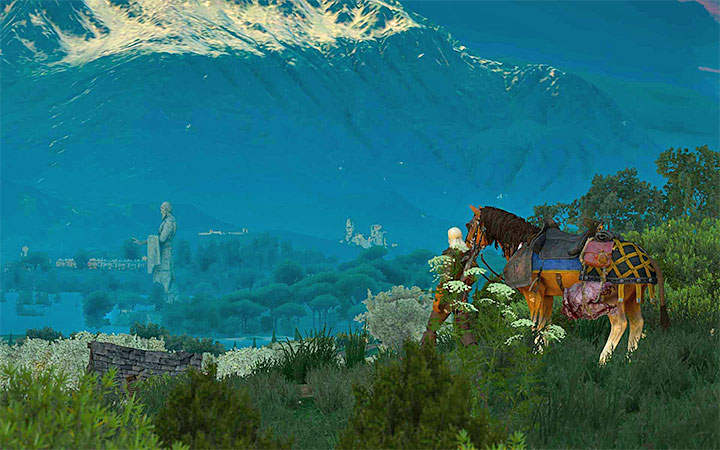 Once you complete all the mini-quests, meet the foreman in the Prophet Lebioda Statue location (M2,9) to receive 800 crowns as a payment. 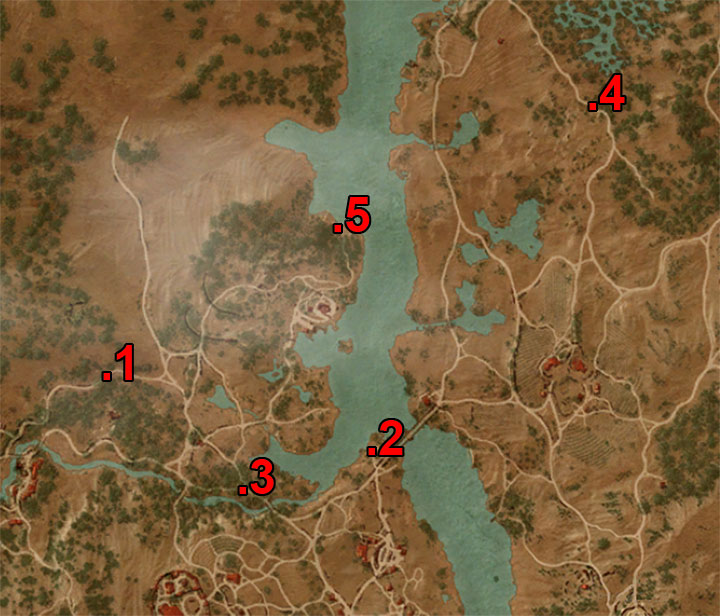 The above map shows the location of transports - it's a north-western part of Toussaint. In each of those places, there is a mini quest to finish. Their descriptions are in the further part of the text. The spots from the picture can be visited in any combination (not necessarily 1 to 5) 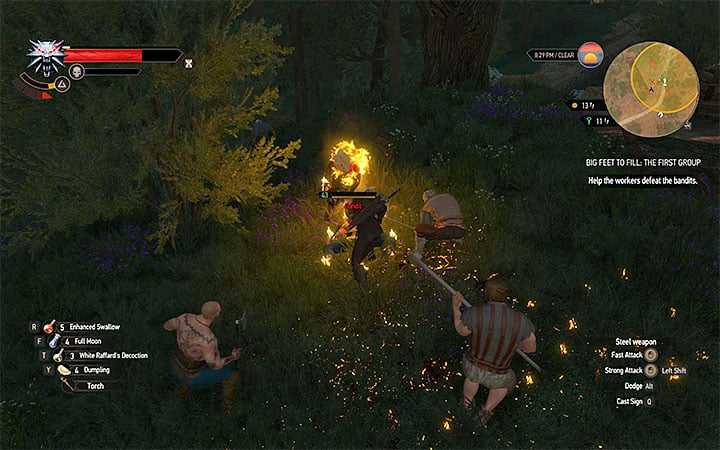 You have to take part in a battle with bandits

Reach the 1 marker from our map. Once you close in to the marked location, you will notice that a large battle between bandits and the people from caravan had ensued. Join the fighting, and watch out for the strongest, 43 level enemies. Once you win the battle, you receive short thanks and quest will end. 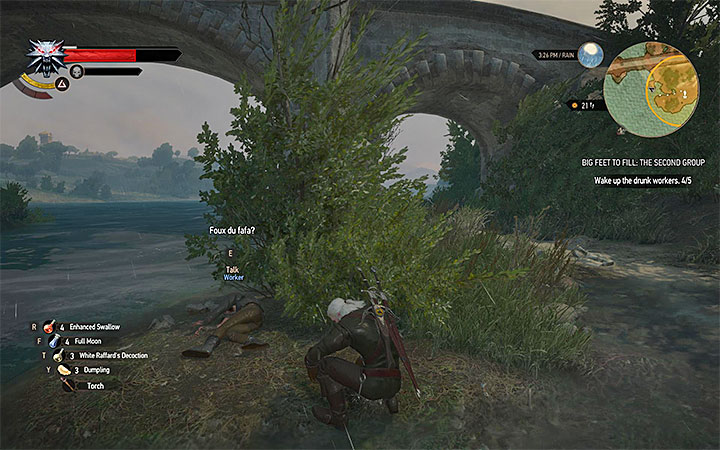 Reach the 2 marker from the map. The reason for not reaching the building site is an alcohol intoxication. Geralt has to wake up all five workers. The one seen on the screenshot can be troublesome - he is sleeping behind one of the bushes near the water. 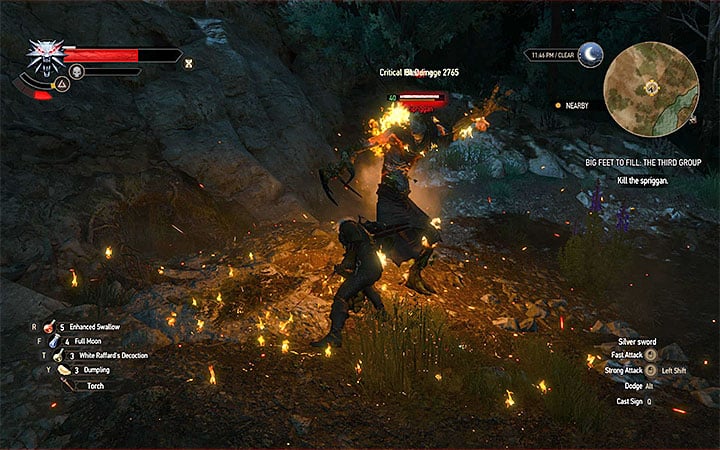 Fire is one of the weaknesses of a Spriggan, so use the Igni sign.

Reach the 3 marker from the map. In the place marked on the map, Geralt will meet a pack of 40 level wolves, which will need to be defeated. Once you clear the area, activate the witcher senses, and search for blood stains. Start following the stains, which will lead the hero to a Spriggan. Before attacking the enemy, apply the oil against relicts. Additionally, check if you have dwimerite bomb in your inventory, and prepare the Igni sign. Try to burn the Spriggan and initiate a sequence of attacks. Avoid his attacks in melee combat, and be ready that he can move quickly from place to place.

Once you kill the monster, search for a hole, where the members of caravan are holed up, and inform them that the danger is over. 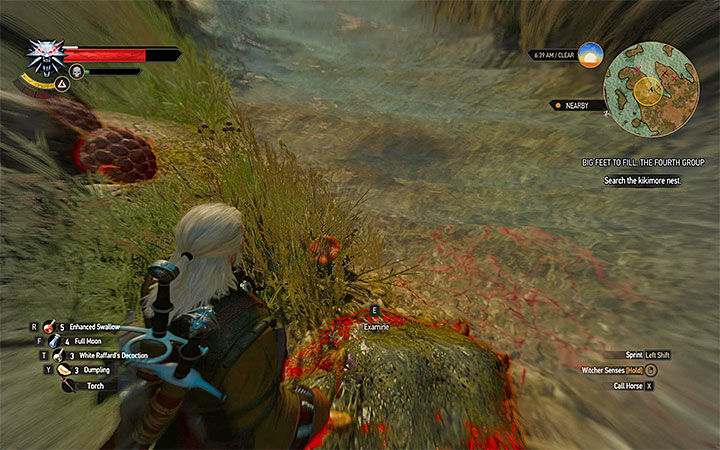 Search the nest after defeating the kikimores

Reach the 4 marker from the map. Once you find the missing transport, activate the witcher senses and investigate a huge blood pool. Start following the trail left by kikimores. Geralt will soon be forced to fight those monsters (36 level). To expedite eliminating the monsters, Geralt can use the oil against insectoids, white honey and Igni sign. Once you win the battle, check the kikimore nest, where you will find the missing people.

Feet to Fill: The Fifth Group 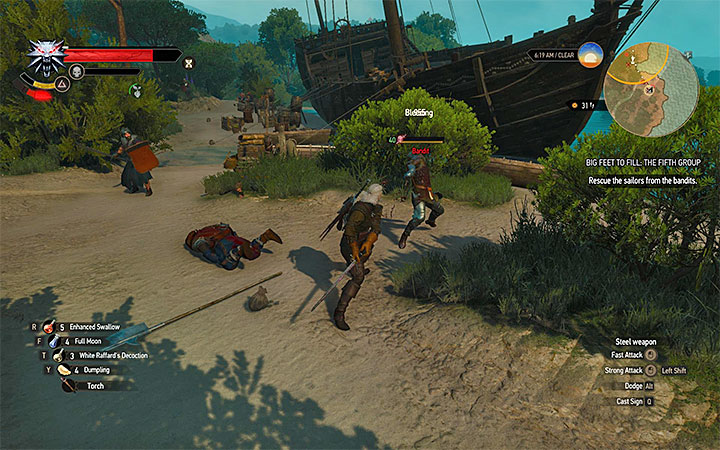 You have to kill all the bandits

Reach the 5 marker from our map. Once you reach the place, you will notice that the transport was attacked by bandits. You have to get rid of all of them. It shouldn't be any problem for Geralt, but it's worth mentioning that bandits are on 38 - 42 level, and few of them use shields. Once you win the battle, talk with the rescued merchant to finish the quest.