This is one of the most complex side quests of Witcher 3: Blood and Wine. It's keynote is a woman named Daphne, who has changed into a bleeding tree. Geralt's task is to remove the curse from the woman. You can do this in three ways and they have been discussed in the walkthrough.

Talk to Jacob the woodcutter 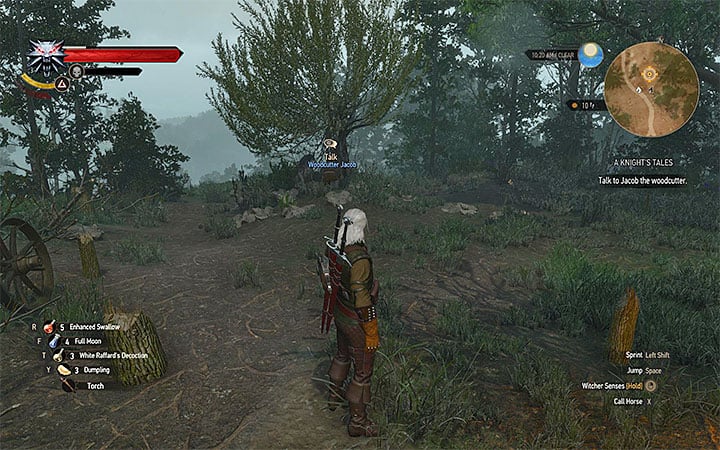 Jacob will be standing near a tree

This task can be unlocked after reading an advertisement from one of the boards in Toussaint, or by finding the quest giver during the exploration. The task is given by Jacob the Woodcutter, who can be found near a big tree in the western part of Toussaint (M2,12). Talk with Jacob to get information about the bleeding tree and the enchanted woman.

Use Witcher senses to find objects available to be investigated. Those are: blood on the main tree, blood marks near the three, and a cut-down smaller tree. Talk with Jacob again. You can start looking for the witch, or negotiate the payment first (sadly, it won't be considerable) The woodcutter will give you a book, Tales and Fables. It is a good idea to read it straight away, because this is required to unlock one of the ways to end this quest. 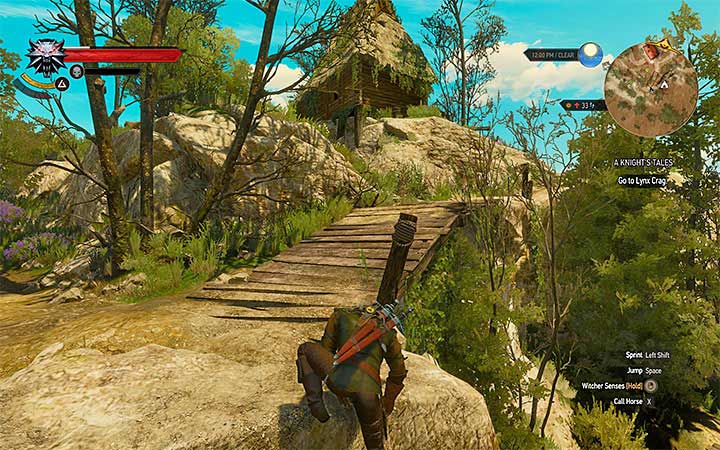 In order to reach the hut, you will need to employ a little climbing

Lynx Crag is located in the north-west from the place where you began the quest (M2,13). The witch's hut is located on a high hill, only a narrow mountainous path leads there. Geralt cannot reach the place on horseback, you'll need to climb the mountain. 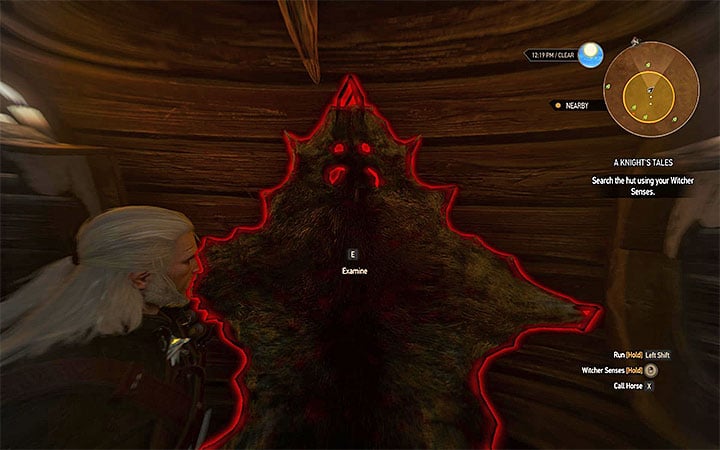 Enter the hut and activate witcher senses. Use the witcher senses to examine all of the objects inside the hut, including two tomes "On the Transmutation of Bodies" and "Liber Ivonis", as well as a note "Remarks on the Proper Administration of Yarrow". Finally, examine the bear pelt shown in the above screenshot that is hanging on the wall. Behind the pelt, you find a magic symbol with several items attached to it. Select all of the options from the list. Thanks to this, you will obtain Silk Kerchief, which you will add to your inventory. Soon, the witch appears in the hut. 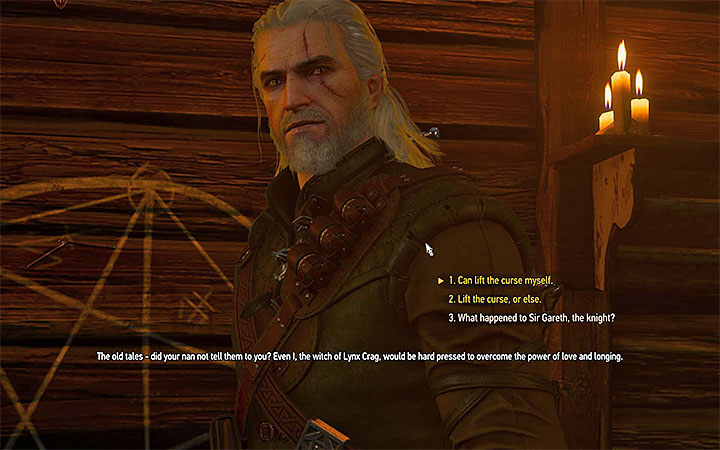 You can try to lift the curse yourself. You can ask the witch to do this, or coerce her to do this.

During the conversation with the witch, Geralt will be left with a choice. You can:

Note - Variant B becomes available only after you have read the book that you have received from the woodcutter and examined all of the objects in the witch's hut.

Variant A - Lifting the curse off Daphne without the witch's help

Return to Jacob, and after a short conversation begin to prepare for the ritual.

You have to start a fire in four different spots (press the interaction button, you don't have to use Igni)

Defeat the wraith from the bleeding tree 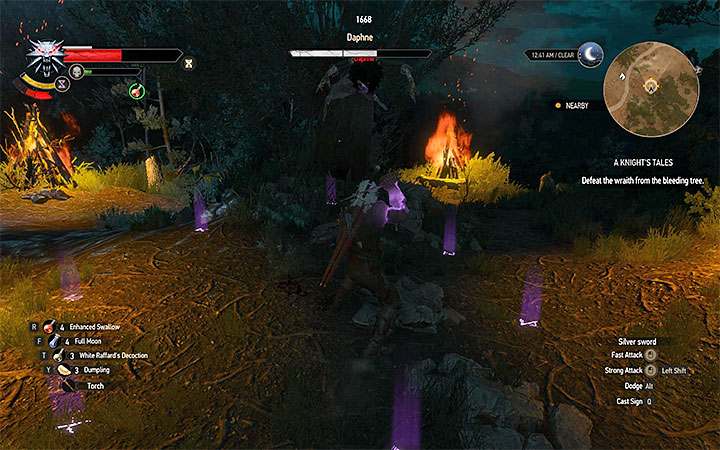 Attack Daphne when she is inside the Yrden circle

After the new cutscene, a fight with Daphne will commence, who has been changed into a wraith. Before the fight, consider using the oil against wraiths. Once the battle begins, use Yrden. Attack Daphne only when she is inside the magic circle, so she will receive bigger damage. Don't attack too much, so you don't give her time to respond, especially that her attacks deal heavy damage. Shortly after the battle begins, skeletons will arrive to the glade. Try to ignore them, and focus on attacking the main wraith.

Once you win the battle, talk with unhappy Jacob, who will give you the prearranged payment.

Variant B - Asking the witch for help lifting the curse 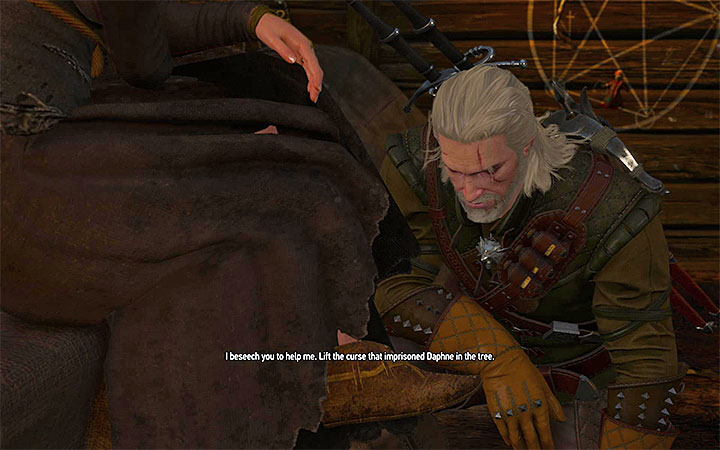 This variant becomes only after you have read the book from woodcutter Jacob (the quest-giver), before meeting the witch, and if you have had a careful look at all the objects in the witch's hut. After Geralt asks the witch for help, you have to select the first dialogue option, thanks to which he will bow before her. Afterwards, agree to give the witch a lock of Geralt's hair. Thanks to this, she will be able to hide from him in the future. 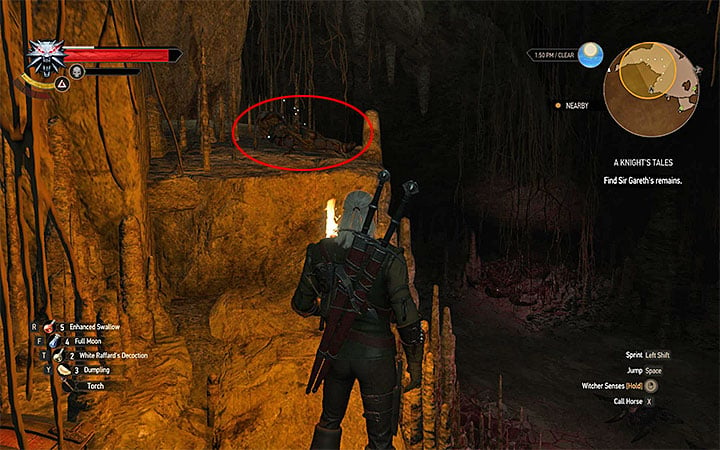 Leave the hut, go back down and find a small entrance into the cave marked by the game. Inside, there are level 40 kikimora workers and a warrior. You can use oil against insectoids to defeat them, White Honey and the witcher Igni sign. After you kill the monsters, take a look around the area to the right of the entrance. Use Igni to destroy the eggs and gain access to the ledge above shown in the above screenshot. This is where you find Sir Gareth's bone.

Go back to Jacob, talk to him and start your preparations for the rite. 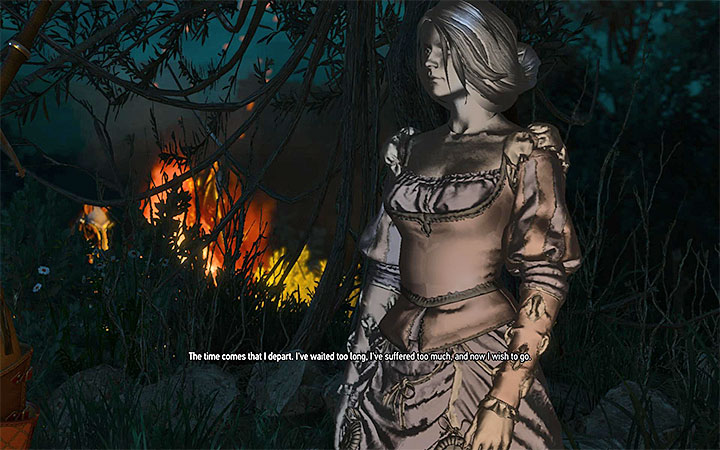 You have to light fire in four separate areas (press the interaction key/button, you do not have to use Igni). The last thing to do is to watch the cutscene of the meeting with Dafne's spirit and of lifting the curse. Jacob will be happy about this and he will pay you.

Variant C - Forcing the witch to help lift the curse

Defeat the witch of Lynx Crag 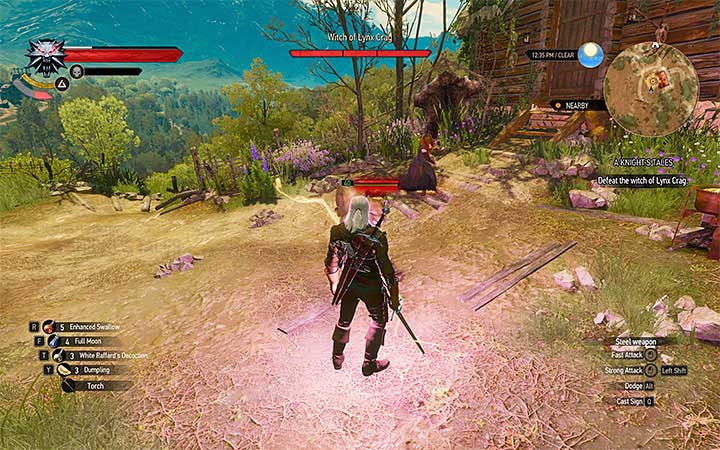 Only engage the witch, and avoid the panther

The battle with the witch will begin once you receive control over Geralt. During this fight, try to stay mobile, to avoid the witch's magic attacks and her 40 level panther. Do not lose time to weaken the panther, but search for an occasion to weaken the witch, because she is the priority here. Geralt has a freedom in choosing the active witcher sign. For example, you can use Quen to lower the risk of damage following the attacks of the witch or the panther, or use Aard in order to stun the enemies.

You have to fight until the witch loses almost all her health, because only then she will surrender and promises to help in lifting of the curse.

You can now travel to the place where you began the quest. Once you arrive, Geralt will notice that Jacob is missing. Activate the witcher senses and start following the red trails.

The marks will lead Geralt to the place with murdered Jacob. Here, you will be forced to defeat Morholt, a wolf possessed by Daphne. The wolf doesn't have any unique abilities, so use the normal sword and, for example, Igni. At the end, investigate the remains, so the quest will be completed.