The Words of the Prophets Are Written on Sarcophagi 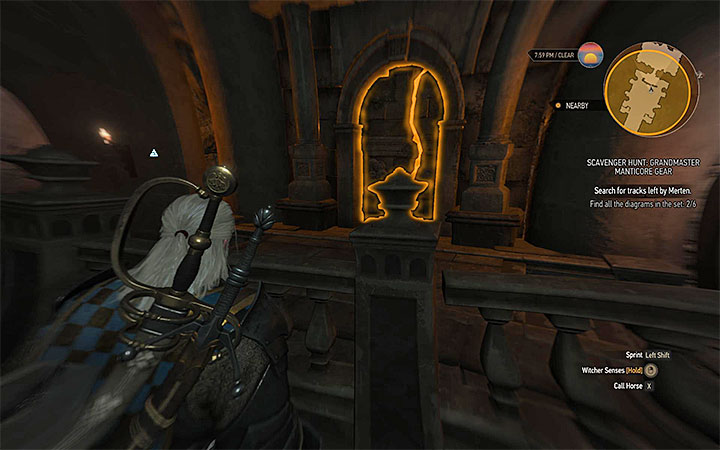 Destroy the weakened part of the wall inside the temple

It's a short side quest. You should take interest in it after reaching 40 experience level. Go to the Prophet Lebioda Statue in the western part of the map (M2,7). Once you reach the destination, enter the large temple. Find a weakened part of a wall in the first room and break it with Aard sign. Then enter the neighboring chamber. 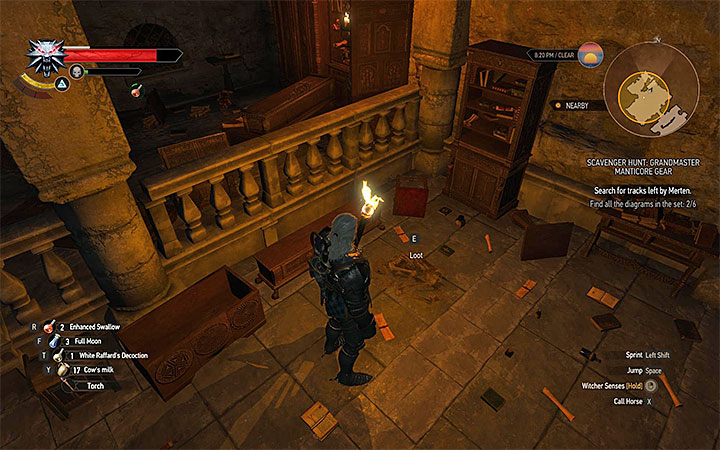 Be careful as Geralt will be attacked here by a level 40 Great Beggar's Ghost. Yrden sign will be helpful in defeating the ghost - after using it wait for the opponent to appear inside the magic circle. Once the battle is won, find the Bones of the Great Beggar shown on the above picture. Go back with the item to the previous room of the temple and place the bones in one of the sarcophaguses. The quest will be completed. 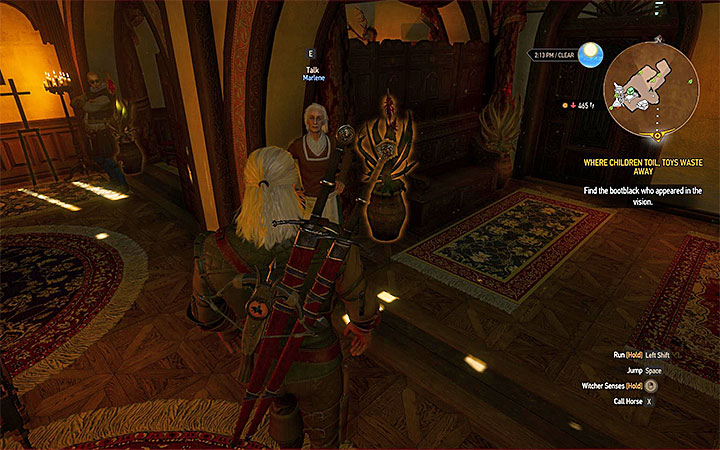 It's a very short quest, which can be unlocked after the main quest La Cage au Fou. In order to unlock it, Geralt has to dispel the curse on the wight, and find a woman named Marlene, and ask her to visit Corvo Bianco (M2,1). The old woman can be visited during your stay in the vineyard, and talk to her. Geralt can suggest her course of action - either to go out in the world, and built a new life, or stay in the vineyard as a guest. In both cases - the quest will end. 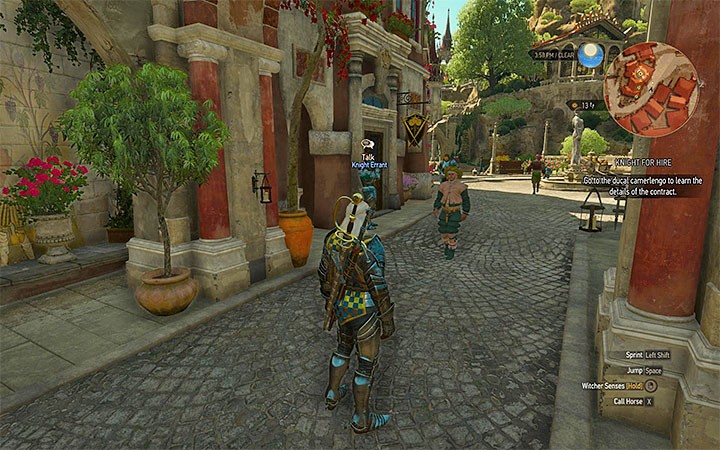 You can unlock this quest by checking one of the notice boards in Toussaint. There you can find a job offer for knights. In order to get more details you must go to Beauclair and find the camerlengo's quarters (M4,3). He will give you contracts which from now you will be able to complete. Important - You can also trade (he mostly sells diagrams and books) and play gwent with him.

There are fifteen contracts to complete. You can find and eliminate people related to contracts in any order you want. 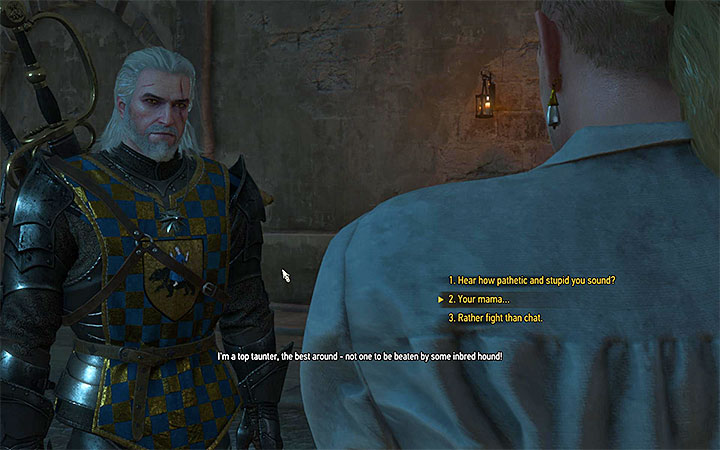 Geralt can beat Mancomb in a words competition

You can unlock this quest by checking one of the notice boards in Toussaint. During it you will participate in fist fights with three different people in Beauclair (M4,5). You can go to these people in any order you want. The opponents to beat are:

1) Colossus - You can fight him in two ways, traditionally or with special rules. If you select the second option then you can win up to 200 pieces of gold. You must stop three attacks of the Colossus. In order to do it you must press the parry button AFTER the Colossus starts his attack. A good reflex is the key to victory.

2) Still Waters - For defeating this opponent you can get up to 100 pieces of gold.

3) Mancomb - You can play a traditional duel with him or win in an unordinary words competition. If you choose the latter, then pick the following dialogue options: second (Your mama...), second (Afraid I might kill you - it's got me uneasy), first (Should've quit before we even begun). The maximum reward for defeating Mancomb is 100 pieces of gold (no matter how you beaten him).

After defeating all three warriors you will learn that you can fight the fist master in Beauclair. It will be a part of a new side quest Raging Wolf. 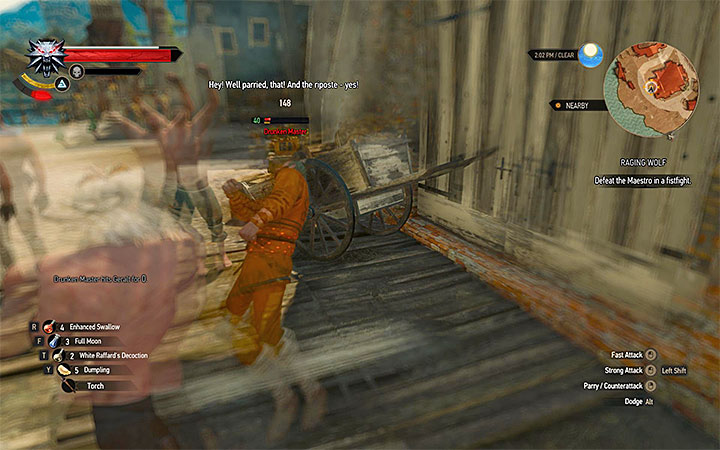 Parry the Master's attacks and put few of your own

This task will be unlocked after you defeat all the enemies in side quest Fists of Fury: Toussaint. The last organizer of the fist fights will tell you about an ability to fight with Maestro. The fight can take place near the Beauclair Port (M4,10). Don't participate in the fight, if Geralt is not at least on 40 level.

Once you arrive to your destination, Talk with the fight organizer and then with Drunken Master. Geralt will be able to participate in the fight only after he gets a drink with the master. This means the fight has a increased level of difficulty, caused by the distortion of the screen. Once the fight begins, focus on perfect parrying the master's blows, i.e. pressing the block button the moment he initiates an attack. This will throw him off balance for a moment, and allow Geralt to put few of his own attacks. Repeat the scheme until the master loses all his health. The highest possible reward for this fight is 150 crowns. Aside from that, Geralt will receive Fist Fighting Championship Trophy.

Meeting with the art curator

You can unlock this quest by checking one of the notice boards in Toussaint or by freely exploring the city of Beauclair. Geralt must get close to the monument of Reginald d'Aubry (M4,6) and meet with the art curator. The man will ask the Witcher for help in reclaiming the genitals that were detached from the monument and stolen. 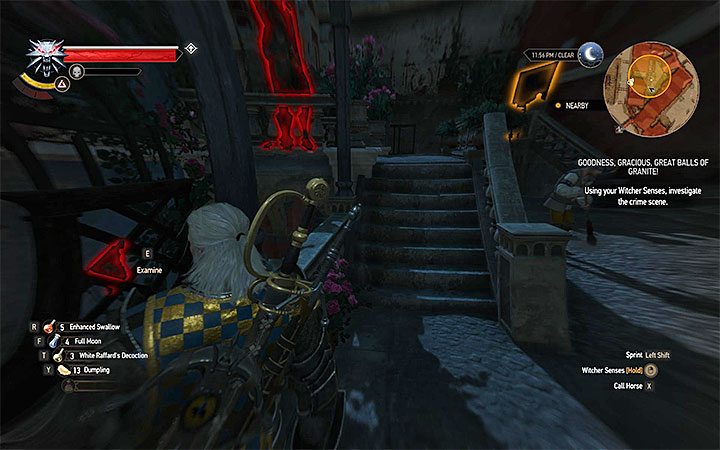 Remain near the monument and activate the Witcher Senses. Use them to find the piece of clothing shown on the above picture (it is located on the left from the monument). Examine the object and you will be able to follow the smell of the clothes. It is a very simple task - keep having the Witcher Senses active and move along the route created by the red tracks. It will lead you to one of the houses in Beauclair. 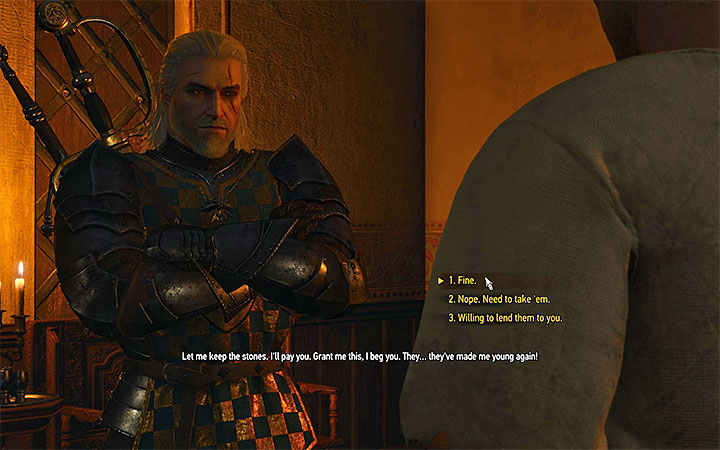 Finally go back to the art curator. Depending on previous decisions you can give him the stolen genitals or tell him that you failed to find the thief. If you managed to restore the genitals then the curator will give you a unique gift - Reginald Figurine.

Of Sheers and a Witcher I Sing 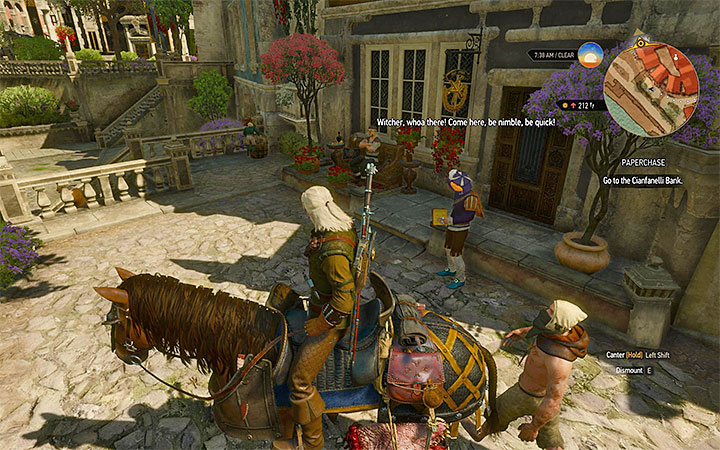 Le Papillon will be standing next to the closed barber shop

You can unlock this quest in Beauclair. Near the Nilfgaardian Embassy in the southwestern part of the city Geralt can encounter Le Papillon (M4,7). Talk to him in order to learn about his suspicious about the missing of barber Jean-Louis Ludovic. You can offer help in investigating the disappearance or you can first negotiate better payment for taking care of the case. 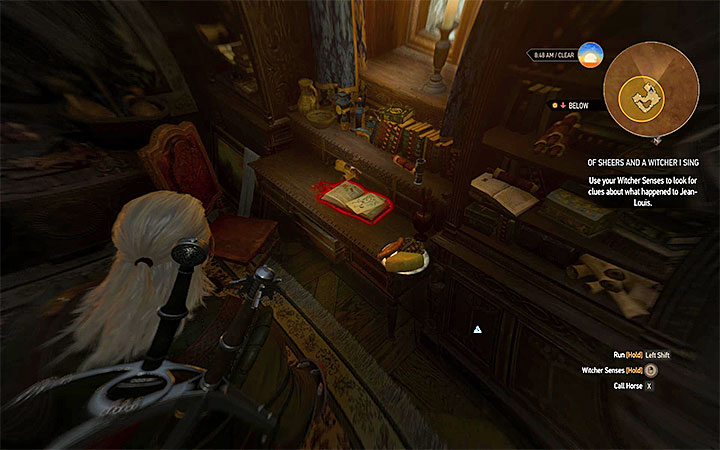 Walk towards the door leading to the barber shop and break them with Aard sign. Activate Witcher Senses after entering the building and examine all the red objects on the ground floor. Geralt won't find anything interesting there, so go upstairs. The most important object to examine is the journal shown on the above picture. Inside it you will find Jean-Louis Ludovic's map.

Now you must follow Le Papillon to the probable location of the missing barber. Soon after leaving the city you will be attacked by level 42 archespore. Reminder: to weaken these opponents you should use Igni in addition to silver sword (with cursed oil). Attack the archespore only when it takes the form of an open flower. In other cases keep away from the closed flowers which will explode after Geralt gets close. Continue the journey after winning the battle. 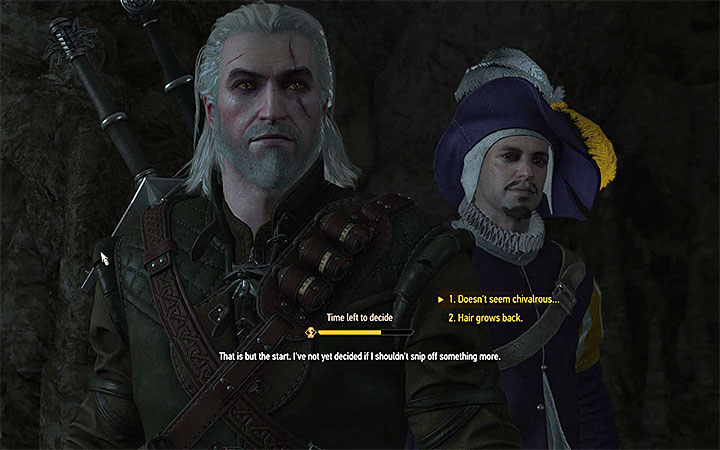 The moment when you must make a decision

Geralt and Le Papillon will soon reach a meadow. Here you must activate Witcher Senses and start exploring the area. Check the bucket and footprints. Start following the trail. It will lead you to the cave. Walk inside and enter the main chamber where a cutscene with Beau Duvall and the kidnapped barber Ludovic will start. You must think about how to end this quest.

This option is related to the first dialogue option. Only Beau Duvall will participate in the battle. You can make things easier by using Quen or Igni sign. Additionally, you should look for openings to parry knight's attacks and perform counterattacks. Watch a new cutscene after winning the battle. Geralt will receive the payment from the barber, not from the poet.

Option B - Defeating Beau Duvall and his squires in battle

This option is related to the second dialogue option. Selecting it means more trouble as in addition to Beau Duvall you will have to defeat his squires. You should first focus on the latter - remember about attacking them one after another. The ending will as before - Geralt will receive the gold from the barber.