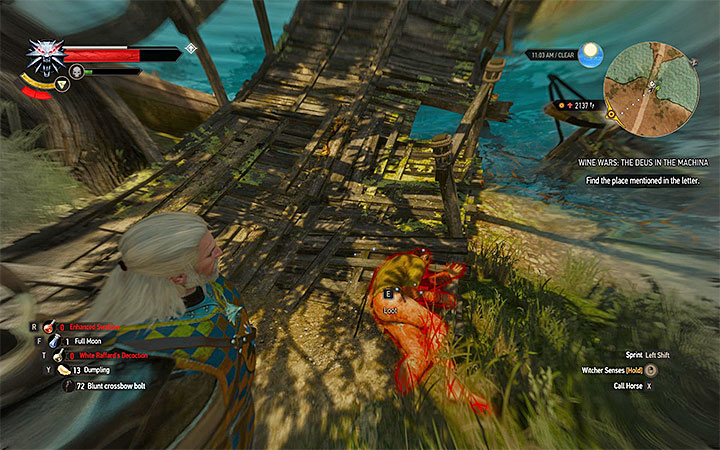 It is a treasure hunt quest. You can unlock it by examining the point of interest near the bridge in the eastern part of the map (M1,4). There are some cave trolls there - you can kill them or quickly sneak past them. You must find the corpse shown on the picture, examine it and collect two items - Key to lockbox and Letter to Cosmo Cyrille.

Read the letter and head towards the new marker in Coronata Vineyard. After arriving at your destination focus on examining the piles of dung - you will find a locked chest. Use the key to open it. In the chest you will find florens and Gold Sapphire Ring.

Don't Take Candy from a Stranger 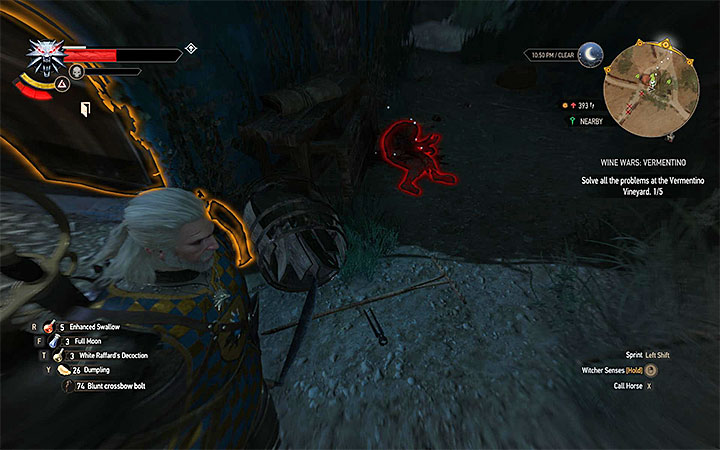 It is a treasure hunt quest. You can unlock it by exploring the point of interest at the cabin in the northern part of the map (M2,4). Rotfiends are there and you can kill them or quickly sneak past them. You must find the corpse shown on the above picture, search it and collect two items - Key to chest in sunflower fields and Augustin Tonnelliay's journal.

Read the journal and go towards the new marker in the Vermentino Vineyard. Once you arrive at the destination, examine the ground in the place with the sunflowers. Behind the flowers you will find a container - use the key to open it. Inside you will find only some florens. 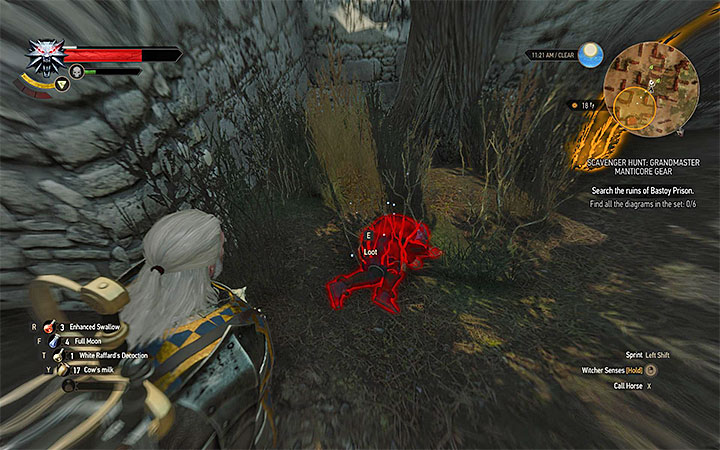 This treasure hunt quest can be unlocked soon after reaching the Bastoigne prison ruins (M2,6). Explore the ruins and you will encounter a Hooded Woman. Once you get close to her, the woman will transform into a powerful alp. You should fight these monsters using the same tactic as in case of bruxas. Most of all use Yrden sign and wait for an occasion when alp will appear inside the magic circle. In addition to that you can use vampire oil, Diamond Dust bomb and Black Blood potion. Once the battle is won, examine the area where the female vampire was encountered and find the corpse shown on the picture. Search it in order to obtain the Clerk's Diary and an Old Key. 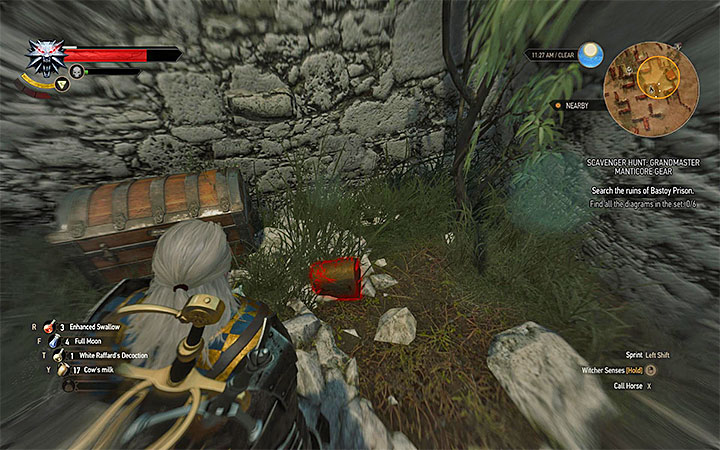 Remain in the ruins and keep exploring them. You must find the small container shown on the above picture - it is located next to a larger chest. Inside it you will find Work Order, florens, Formula: Lesser Mutagen Transmutator - Blue to Red, Diagram: Toussaint Ducal Guard Captain's Armor and Diagram: Toussaint Ducal Guard Captain's Trousers. Both diagrams are for a character which has at least 45 experience levels. 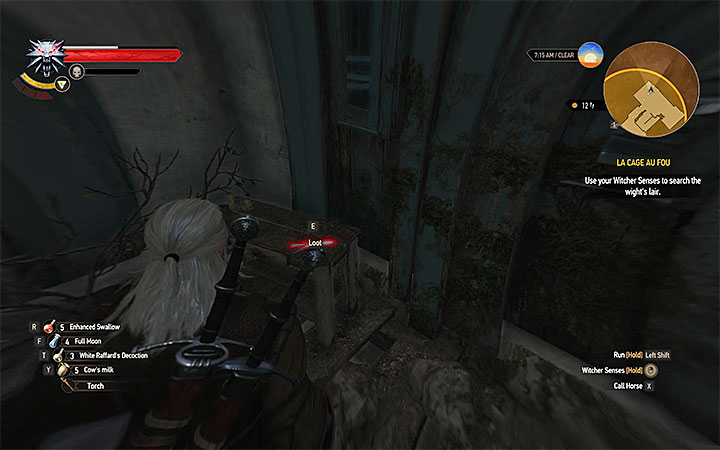 It's a treasure hunt quest, which is unlocked best during the main quest La Cage au Fou , because a part of this task is the exploration of Wight's hideout located in the south-eastern part of the duchy (M5,5) (the wight's hideout can be visited in the latter part of the game). Once you reach the house, start to explore its main floor. In the place shown on the above screenshot, Geralt will find a Spoon key. Taking it will also yield in a Spoon-key note. Read the note to unlock the quest.

Travel to Pheasantry, in Beauclair. Talk with the Innkeep about the spoon, and find the entrance to the cellar behind her. While in the cellar, check one of the big wardrobes, and take the Smigole Louis Serkis' cookbook. Read it. 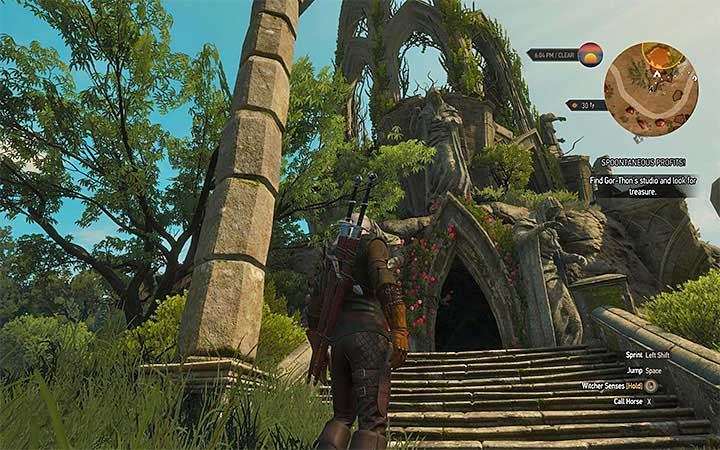 Entrance to the studio

Leave the building and travel in the direction of Gor-Thon's studio, which is in the eastern part of Toussaint (north of Mont Crane castle). This is a big ruins, which cannot be overlooked. Find the entrance to the studio and use the Spoon-key to open the door. You can investigate the studio. The most valuable items are hidden in the chest, which are Recipe for "etoile blanche" pasta, Honey spice cake recipe, Crayfish boil recipe) Aside from that, the studio is full of rare ingredients, which can be taken

Around the world in... Eight days 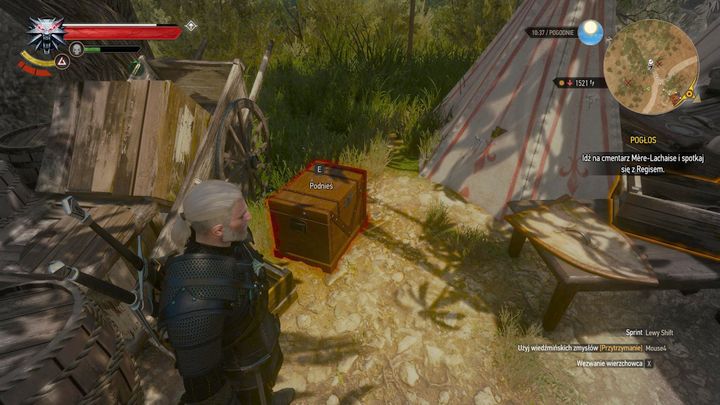 In the crate, there is a key and a report.

Treasure hunt. You unlock it by examining a place of interest (M1,8). First, deal with Grasant (level 44) guarding the crate, Then, loot it to find the key and unfinished report. In the crate, there also is a rare blueprint: Beauclair Guard Trousers.

After you read the report, go east and reach the marked location. Once there, you will encounter several more Grassants (level 44), and you have to deal with them. After the fight, loot the crate behind the cart. Inside, you will find several interesting crafting materials crafting materials, Beauclair Captain Shoes and florens.

What Was This About Again? 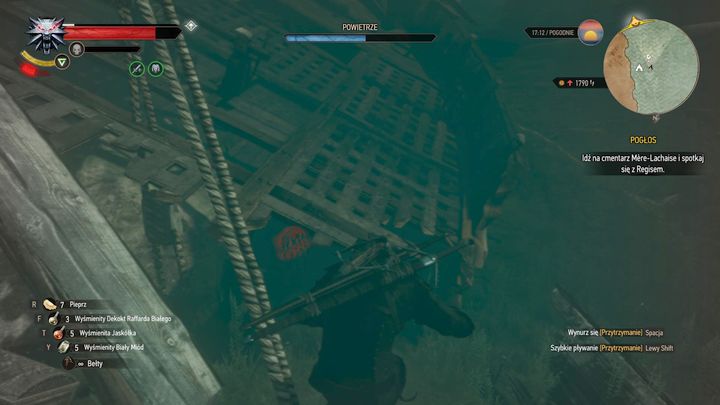 In the chest, there is a key and captain's log.

Reach the hidden treasure (M1,9). First, use crossbow to deal with all the Drowners there (level 44). After you kill all of the opponents, loot the chest under the shipwreck. Thanks to this, you will obtain a key and captain's log. 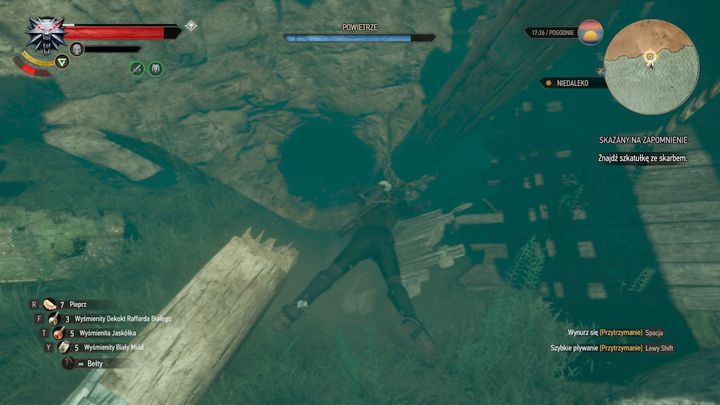 The entrance of the cave where there is the treasure.

After you read the log, head towards the cave entrance shown in the above screenshot. Inside, there is a Shaelmaar (level 43). Either deal with him or ignore him and escape into a narrow passage. Regardless of what you do, use witcher senses to find the chest. Inside, there are several useful crafting materials, coins and a rare silver sword blueprint - Tah'rel.

The Curse of Carnarvon 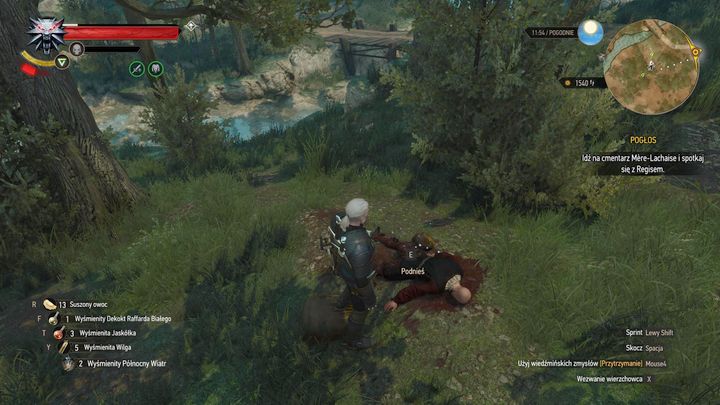 ON the corpse, you will find a key and a journal.

Treasure hunt. You unlock it by checking out a point of interest (M2,10). First of all, deal with Barghests (level 38), which have been guarding a man's corpse. After the fight, loot the corpse to obtain a key and a journal. 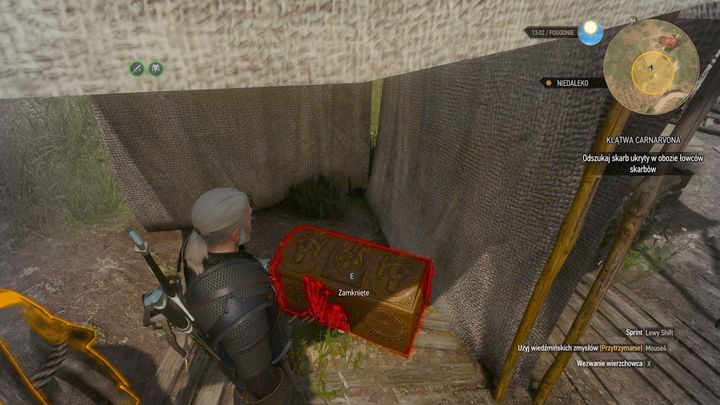 Go to the marked spot and kill all of the archespores (level 46). In one of the tent, there is a chest that you have to loot. Inside, there are interesting crafting materials, several hundreds of crowns and a rare blueprint: Knight Tourney Chest Armor.

The Suffering of Young Francois 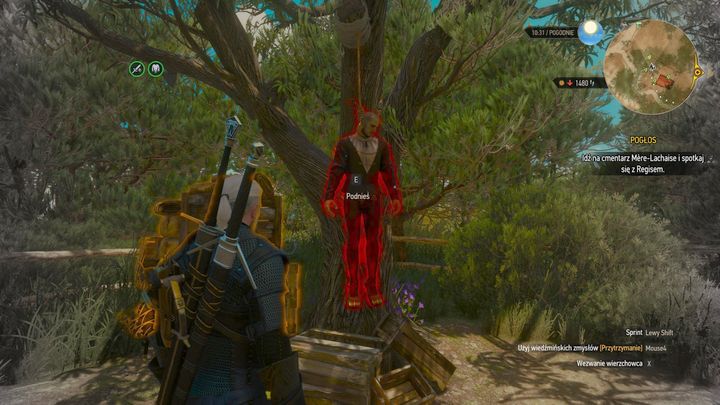 On the corpse, there is suicide's journal.

Treasure hunt. After you get to the spot (M2,11), you will have to deal with a wraith (level 47). After you defeat the opponent, loot the corpse hanging on the tree and you will find suicide's journal.

from the journal, you will learn that the gems that the journal mentions have been hidden in a locker and buried. Go to the marked spot and use witcher senses to search the area around the statue. In the locker, there are several crafting materials and several hundred crowns. 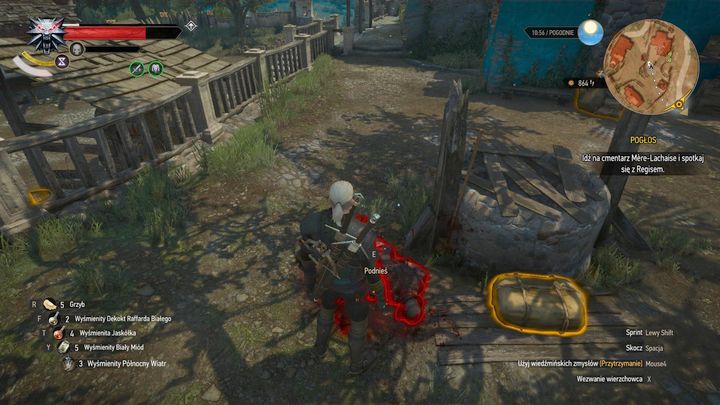 On the corpse, there is a note.

After you get there, you will have to deal with a ghostly knight (level 47). During the fight, remember to use the Yrden sign. It slows down your opponent and you will be able to deal damage to it with impunity. After the battle, loot the corpse by the well and read the note. 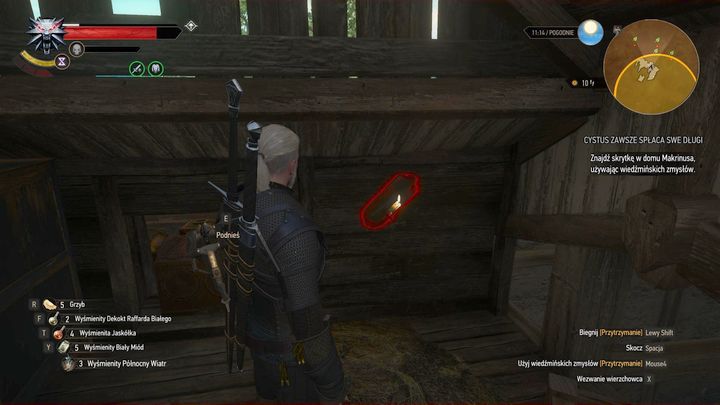 Hidden lever that you find after you use witcher senses.

After you read the note, go to the main house and climb to the first floor using the ladder. While upstairs, use witcher senses to find a secret lever to gain access to the locker. Here, you find several crafting materials and a rare blueprint -Beauclair officer pants. 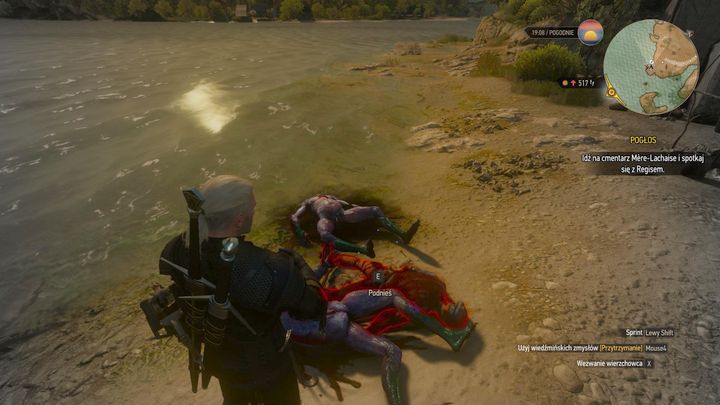 On the corpse, there is a letter and a key.

Treasure hunt. deal with all the drowners on the shore (M3,8) and loot the corpse to find a letter and a stash key. You can find the stash under the shipwreck underwater.

The Last Exploits of Selina's Gang 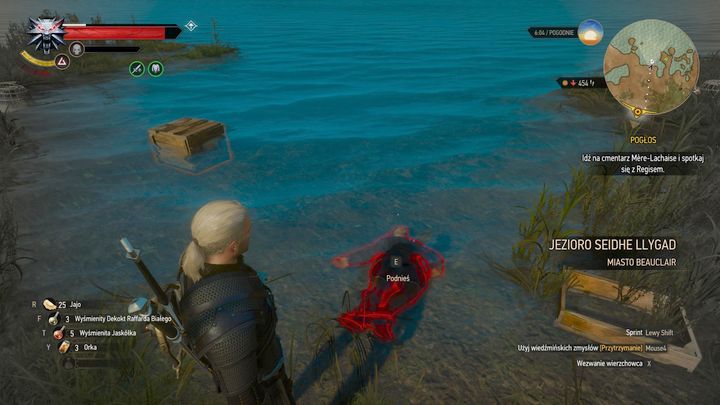 Loot the corpse to find a letter and a stash key.

Treasure hunt. Kill all the drowners on the shore (M4,12) and loot the corpse to find a letter and a stash key. After you read the letter, go to the Beauclair dungeons. 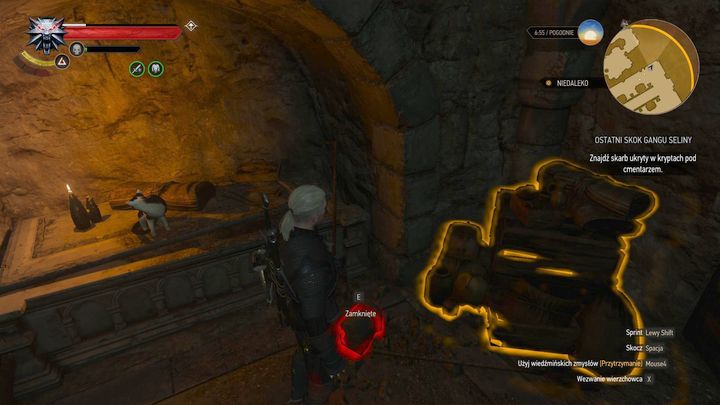 Search the locker to end this quest.

After you get there, you have to climb down to lower levels, where you encounter grave robbers. After you eliminate them, use witcher senses to find the locker. Inside, you find some valuables and a rare blueprint -Toussaint Steel Sword.

But Other Than That, How Did You Enjoy the Play? 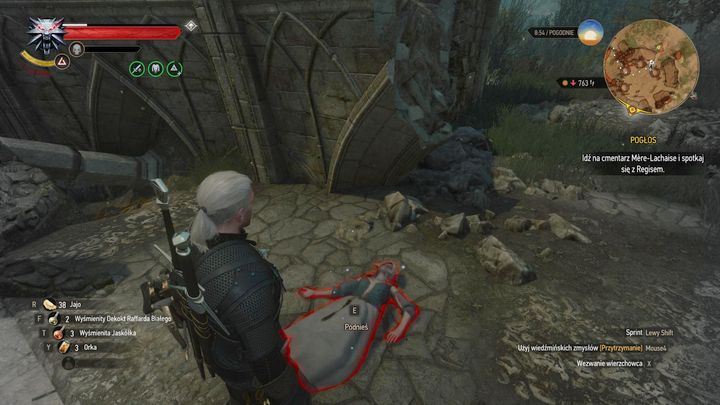 Loot the woman's corpse to collect a wine bottle and a journal.

Go to amphitheater (M4,13) and loot the corpse of the woman to find wine "Vis la Crac" and a journal. After you read the journal, this quest starts automatically.

The objective is to solve a puzzle, where you have to light all five candles in the correct order. Use witcher senses to find the woman's footprints and start off by the corpse. Note that you have to light the candles in the same order as the woman did, which is why the first candle is the one that you reach as the last one. Follow the footprints to the first candle and light all of them in the correct order. After you light all of the candles, access your inventory and move wine "Vis la Crac" from the Quest items tab to one of the potion slots and drink it to summon the phantom of the amphitheater. Also, you can prepare yourself before the fight, by using the oil against phantoms and Yrden sign. This will ensure you with an edge, during the fight. 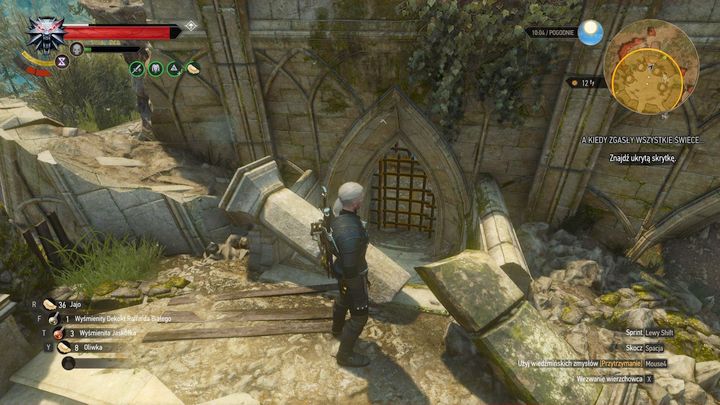 The spot where you find the locker.

After the fight, loot the phantom's remains for pendant-key and find the spot shown in the above screenshot. Across the gate, there is the locker, in which you find some valuables and a Beauclair captain armor set. The quest ends after you open the locker. 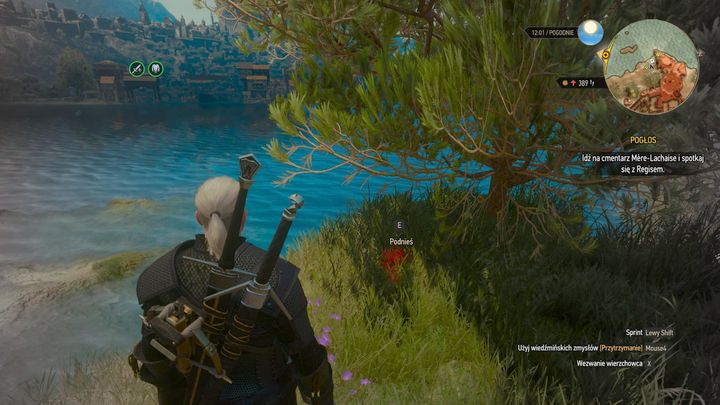 On the corpse, there is a journal.

Reach the cliff by the prison (M5,10) and loot the corpse there for a journal. After you read it, jump into the water and swim into the flooded tunnel. Inside, use witcher senses and find the ones of a man. Loot them to find a stash key.

After you collect the key, go to the flooded ruins marked on your map. The cave entrance has been shown in the above screenshot. The cave is large, which is why you can use the elixir that extends time you can spend underwater. At the end of the cave, there is a chest that you can find using witcher senses. Open the chest to end this quest. 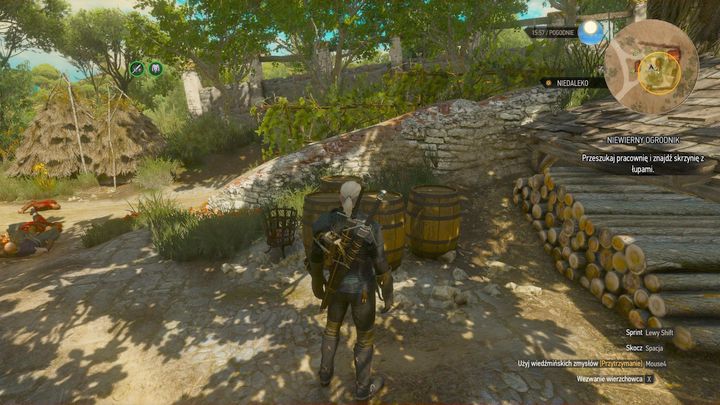 Destroy the barrels to find the locker.

Go west and clear the area of bandits (M5,11). In the sack by the barrels, there is a key and a note. Treasure hunt starts after you read it. The treasure itself is not too well hidden and you can find it behind the barrels shown in the screenshot. Destroy them using Aard sign. In the stash, you will find some valuables and a blueprint: Beauclair Officer Steel Sword.

Waiting for Goe and Doh 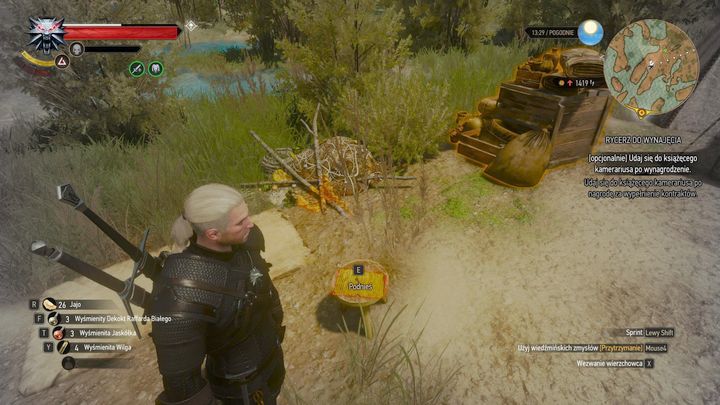 from the stool, collect a note and a key.

Treasure hunt. Reach the Eastern part of Toussaint (M5,12) and get rid of all the drowners (level 40). After the fight, use witcher senses to find a stool with a key and a note on it. Read the note to start the hunt.

After the hunt starts, go to the location marked on the minimap and dive to find the chest. Inside, you will find some valuables and a rare blueprint: Belhaven blade.