It is a very unordinary Witcher contract during which Geralt won't have to defeat any powerful monster. Instead of that he will have to fulfill unorthodox needs of count Beledal who wishes about participating in a dangerous hunt. 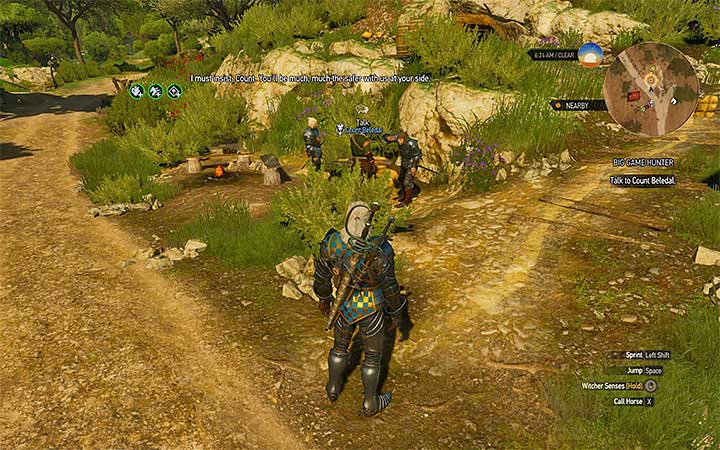 The count can be found near the Chuchote Cave

You can learn about this Witcher contract by reading one of the notice boards. The questgiver is Count Beledal and you can find him near the Chuchote Cave (M2,5). Meet with the count once you reach the destination. You can immediately agree to take the contract or bargain a better payment. The count will give you Count Beledal's map which you must watch before starting the journey.

From now on you must not only make sure to reach marked areas but also protect Beledal (his health bar is shown on the screen). During the march depend mostly on Witcher Senses and on the minimap markings - avoid monsters and animals that aren't related to the quest. Slow down once you start getting close to the panthers' lair and use Witcher Senses more frequently. If there are traps nearby, you can bypass or disarm them (if Geralt walks on a trap he will lose some health points).

Free the panther from the trap

The modus operandi is same as before. Follow the minimap markings and don't participate in any combat unrelated to this quest.

Activate Witcher Senses once you reach the nest and locate one of the giant centipedes moving underground. Use the sound visualization (the red pulsing circles) to follow the creature into its nest.

Find a place with a good view of the lair 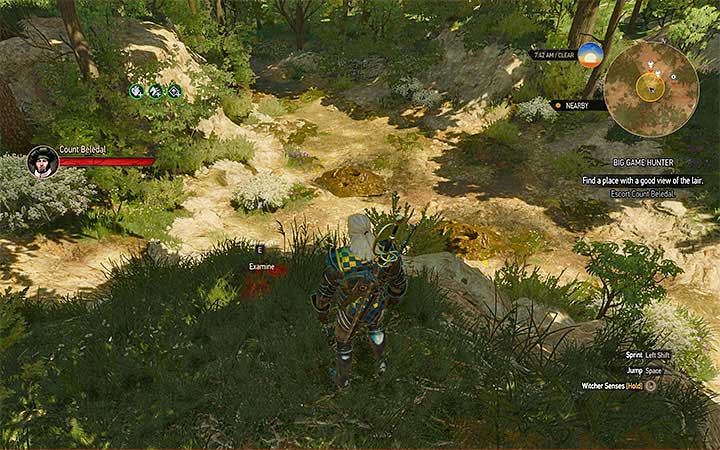 Soon you will reach the lair of the giant centipedes. After listening to the conversation with Beledal you must focus on finding a good viewpoint - it's the one shown on the above picture. Position yourself there and press the interaction button.

Destroy the nest to flush the giant centipedes out

Walk of the hill and reach two nests in the lair. You don't have to waste a bomb on destroying them - it will be much easier to simply use Aard sign on them.

Wait for the count to "preserve" the giant centipedes

When giant centipedes appear in the area you must start running through the whole lair. Don't fight the monsters, instead wait for count to finish preserving them. Once it is done, move away from the nest and go back to Beledal. The giant centipedes shouldn't follow Geralt.

Lead the count to the place where peacocks live

Check the updated map of nests and go with Beledal for the final trip. As before, avoid any unnecessary battles on your way.

Use your Witcher Senses to find the peacocks' tracks 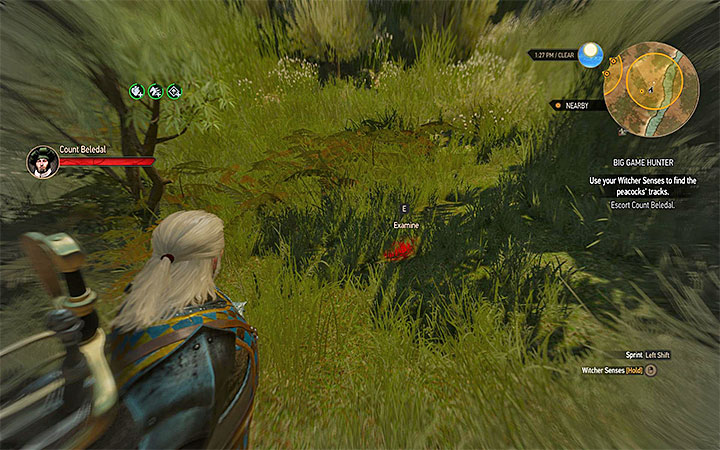 You must find peacock feather

Activate Witcher Senses once you reach the nest and find Odorous peacock feather. Geralt will memorize the smell of the feather and thanks to that he will be able to track the peacocks. Keep using the Witcher Senses and follow the red trail.

Once you reach the meadow wait for count Beledal to position himself in the proper place. Then start acting - you must select Witcher sign Axii and use it on three peacocks of your choosing. 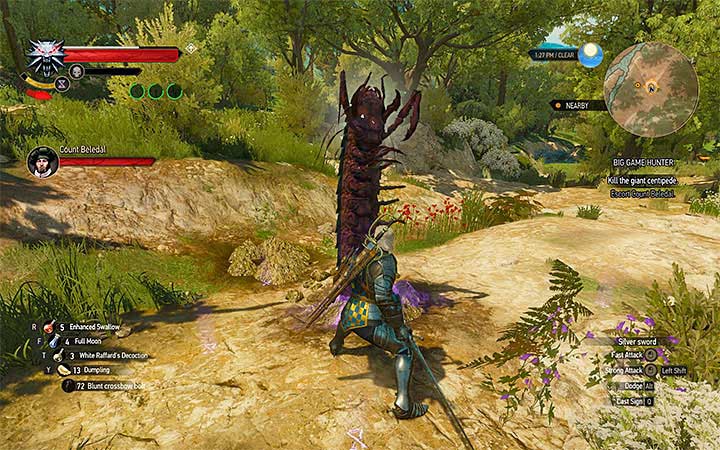 A giant centipede will appear on the meadow and this time you will be forced to defeat that monster. During the battle you should make sure that the monster is focused on Geralt so that nothing bad happens to Beledal. Use Yrden during this battle and remain in the magic circle so that the giant centipede will appear inside. The monster will be paralyzed after it moves from the ground. Use that for your advantage and immediately attack the uncovered part of its body.

Wait until noon tomorrow and go to the picnic

Once all is done, speak to Beledal who will thank you for your help. The count will give you gold and will invite you to the picnic in his mansion - you should accept the invitation. However, you cannot go there immediately. You must wait for the tomorrow afternoon. If you want to finish the quest immediately, use meditation or go back to Geralt's property and interact with the bed. Select Francollarts (southern part of the duchy) from the map.

Once you reach the village, go towards Beledal mansion. You can see the paintings presented by him (optional mission objective) and then speak to the count. He will give you an additional gift - a painting of Geralt fighting a giant centipede.