This is quite a complex main quest, during which you will try to pinpoint the location of Dettlaff's hideout with the help of a friendly vampire named Regis. This quest is divided into two large parts. During the first one Geralt has to track the Wight and acquire its saliva. Additionally, Geralt can also lift the curse from the Wight, or kill the monster in combat. The second part of the quest is a journey accompanied by Regis to the ruins of Tesham Mutna. There Geralt must perform a ritual that will awaken Regis' thirst for blood. 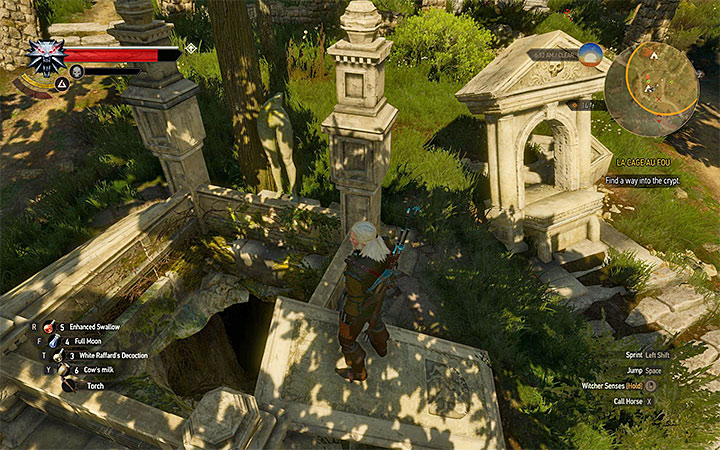 Mere-Lachaiselongue Cemetery is located to the south-east of Beauclair (M5,4). After arriving at the cemetery you must be prepared for an encounter with Barghests, Archespors and Ghouls, although those monsters should pose no threat to Geralt. After securing the cemetery try to access the crypt through the main entrance. Unfortunately, it will be closed. Look for the open tombstone (which can be seen on the above screenshot) and jump inside. 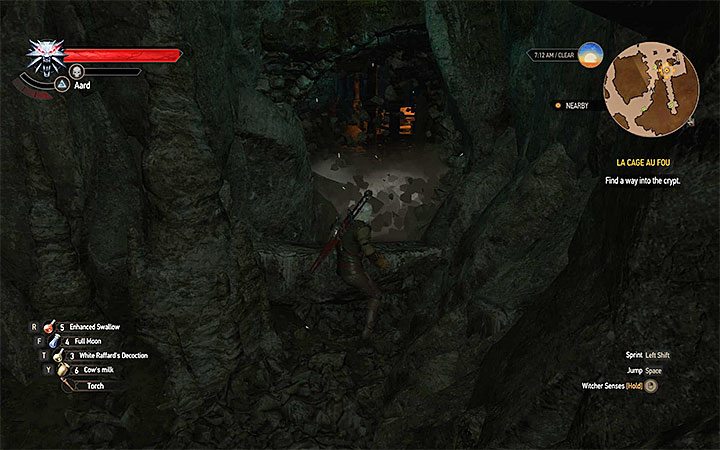 You must tear down one of the walls during the exploration of the crypt.

Soon after entering the crypt Geralt will be attacked by Kikimore Workers. You can make the encounter easier by using an insectoid oil, White Honey, or the Igni sign. Afterwards, continue the exploration of the crypt and use the Aard sign on a blocked passageway to be able to go through there. After a short march you will finally reach Regis. A longer cut-scene with the meeting with the vampire will now initiate. After leaving the crypt you can drink with Regis (which gives you a chance for an additional conversation) or immediately head to rest. In both cases you will be given further instructions on finding the Wight and acquiring his saliva required to prepare the potion.

Looking for the wight

Look for the wight's lair 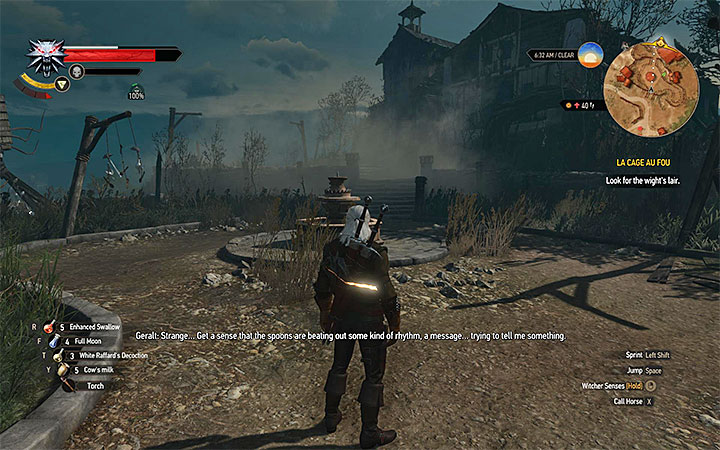 A hunting cottage - the hideout of the wight.

Before you venture to look for the wight, open up Geralt's journal, go to the bestiary tab and familiarize yourself with the first entry about those creatures (Spotted Wights). Your destination is the Trastamara Hunting Cottage, located to the south-east of the cemetery (M5,5). A curved route leads to the hunting cottage. There might be monsters lurking nearby (such as Barghests or Ghouls) - you can either kill them to gain additional experience points or ignore them. As soon as you approach the building a short cut-scene will initiate. Afterwards, enter the building.

Use your Witcher Senses to search the wight's lair 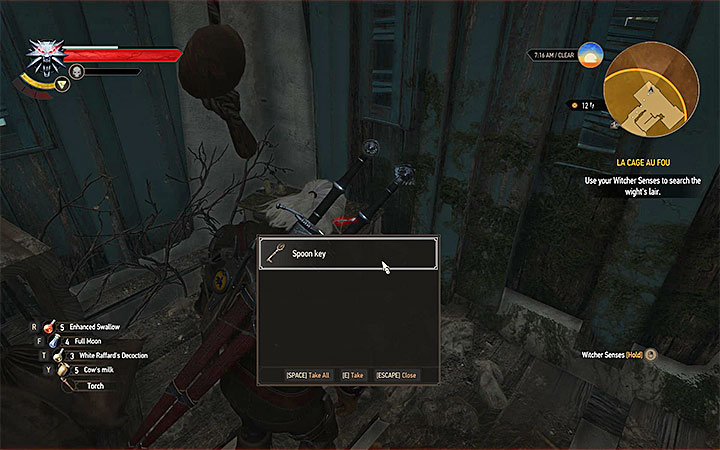 One of the finds is a Spoon key.

Activate Witcher Senses and start a thorough exploration of every room inside of the cottage house. Geralt will be finding multiple spoons and one of them will turn out be a key (Spoon key) with a note assigned to it (Spoon-key note) (gaining the unique key will unlock the quest Spoontaneus Profits!). Examine the furnace as well, where you can find a Stained Diary, a crashed mirror, a table with three skeletons on it and a locker standing in the corner where a Decaying letter can be found. After you're done exploring this area, head to the stairs leading to the basement. 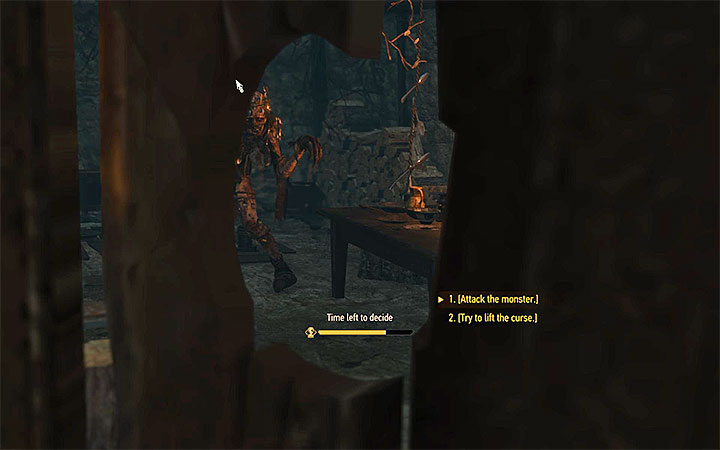 A moment of an important decision.

The cauldron you are looking for can be found in the first room on the right side. After entering this room you can examine the utensils lying on the table (you should get additional experience points by examining the entire house). You can examine the cauldron after you've done everything. When you're done, save the game as an important decision awaits you. Hide inside of the closet located in one of the corners of the room.

When the Wight enters the room Geralt will be presented with a choice. You can:

Variant A - Attack the Wight

You don't have to rush to catch the Wight, as this monster won't be able to get away from Geralt. Get inside the largest room located in the basement of the building where the encounter with the monster will take place. 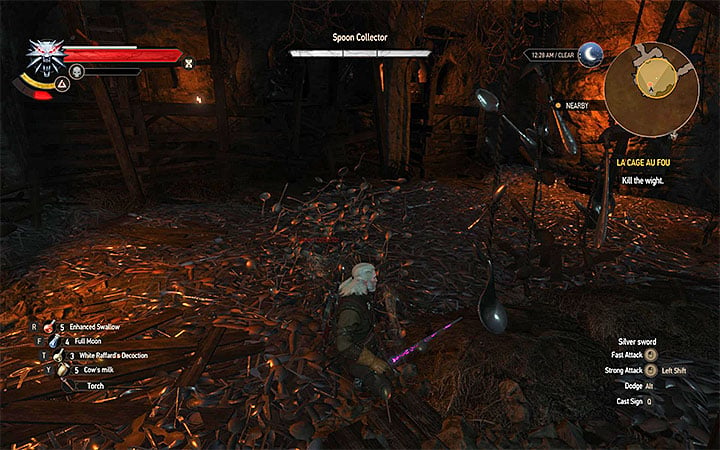 The Wight (Spoon Collector) isn't a difficult enemy, although it has its own health bar shown at the top of the screen, hence it's treated as a boss enemy by the game. The monster relies on melee attacks, but Geralt will be able to easily block them, or outright dodge any of them by side-stepping. Dodges are also useful when dealing with the second type of attack of the monster. The Wight will vanish from the battlefield and move underground. When it happens try to follow its movement and prevent it from getting close to Geralt. The monster can grab the protagonist and deal damage - this attack cannot be interrupted or defended against when it starts. 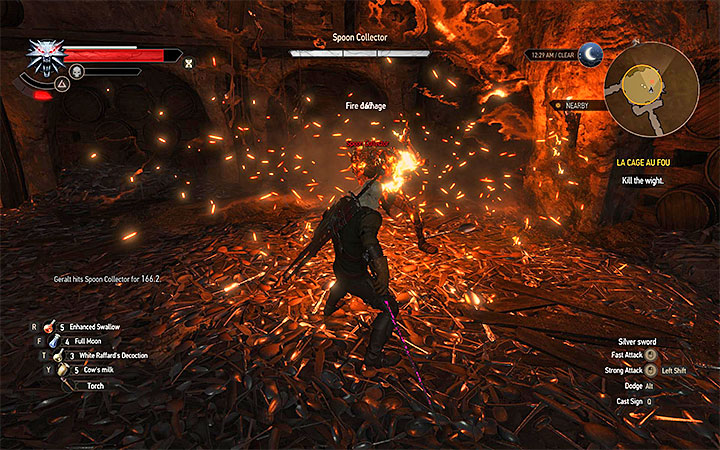 The Igni sign can set the enemy ablaze, exposing it to Geralt's attacks.

You can prepare yourself for the encounter by applying the necrophage oil on the sword. When the battle starts, the best tactic is to use the Igni sign repeatedly, which is extremely effective at setting the boss on fire. This in turn will expose it to Geralt's attacks. Continue using the mentioned sign and melee attacks and the boss should soon by lying dead on the ground.

When the encounter ends search the corpse of the enemy - this will allow you to collect the Wight Saliva Gland you're looking for. Additionally, collect the trophy (Wight Trophy - +5% experience points for defeating monsters) as well as a key (Disgusting white key). The key can be used to unlock the door leading outside the building.

Variant B - Lifting the curse 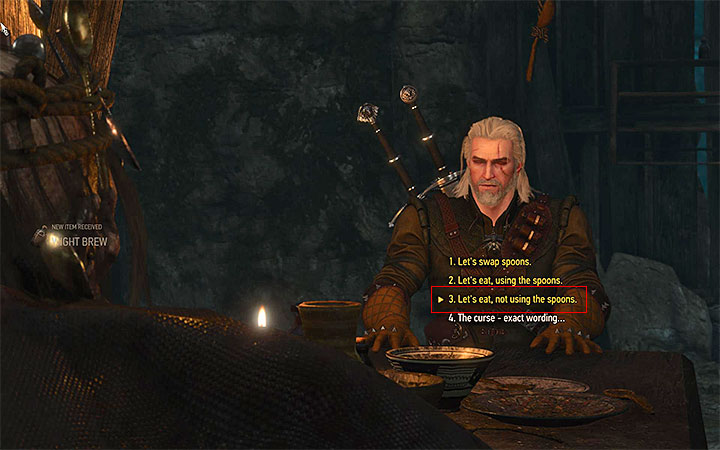 This option requires you to lift the Wight's curse. By doing so the monster will revert back to its natural form and Geralt won't have to fight it. After both of you sit at the table you must choose the third dialogue option, shown on the above screenshot - the one talking about eating without using spoons. This will allow Geralt to lift the curse after the monster looks at its reflection in the mirror. Additionally, you will acquire Wight brew.

Note - if you have accidentally chosen the first (swapping spoons) or the second (consuming the brew with spoons) dialogue option the curse won't be lifted and the Wight will run away to the main room of the basement. You can now do two things - you can either leave the location after you've automatically acquired the wight brew, or follow the monster and defeat it (the course of action is identical to the one presented in Variant A). 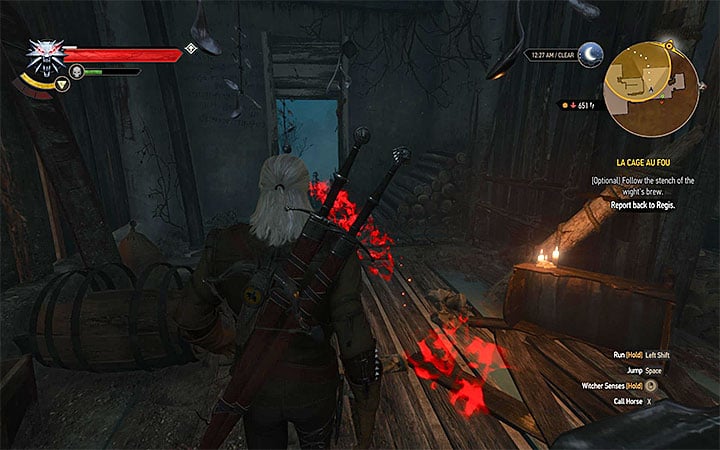 The stench will be visible after activating Witcher Senses.

This objective is optional and it will only unlock after you've chosen the correct (third) dialogue option - if you consumed the brew without a spoon and lifted the Wight's curse. Activate the Witcher Senses and follow the reddish trail of stench, which will lead you to Marlene, the former Wight. Both of you will be moved to the Corvo Bianco Vineyard, where Geralt will let the woman stay (you will be able to visit her later on the vineyard). You will be given 1000 bonus experience points for lifting the curse.

Getting back to Regis

Report back to Regis

You must get back to Regis regardless of the outcome of the crypt quest - whether you've battled and killed the monster, or lifted the curse. Depending on the outcome of that encounter Geralt will give Regis the monster's saliva glands, or the wight brew. Further conversation with the character will have an identical course. You can either tell the man that you're ready to depart for the Tesham Mutna Ruins (M5,6) immediately, or ask for some time to prepare for the journey.

Journey to the Tesham Mutna Ruins

After reaching the Tesham Mutna Ruins enter the building and follow Regis. You will soon reach a room with a cage inside, where Regis will soon be placed.

Place bait in each of the four tunnels 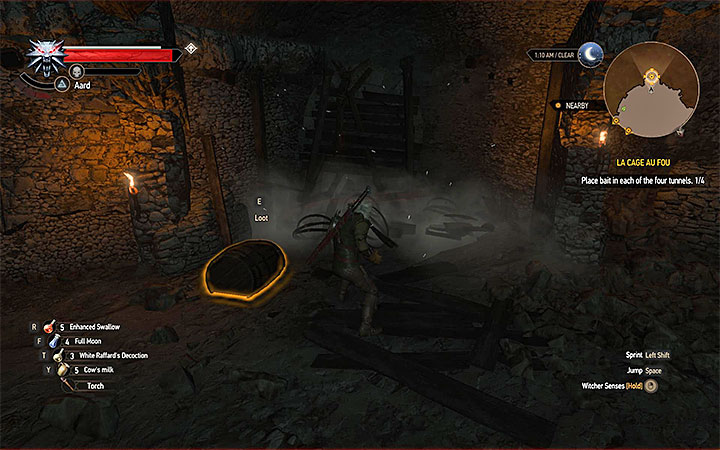 Use the Aard sign to unlock the passages into two of the four tunnels.

Regis will give Geralt four baits (Scavenger Bait). You must get inside four different tunnels and place the baits there by pressing the interaction key/button. In case of two of the four tunnels you will need to use the Aard sign to clear the passageway. Before you go back to Regis make sure that Geralt is at full health and that he has access to additional items (oils, elixirs) that will aid him in combat with vampires and necrophages.

Kill monsters until bloodlust transforms Regis into a monster 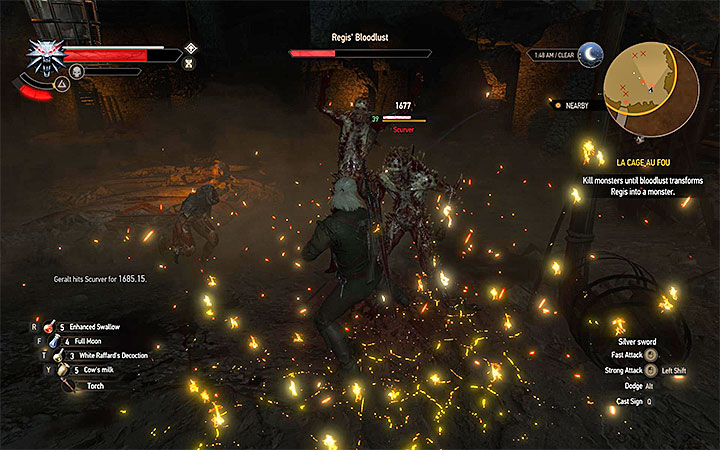 Attack the monsters in any order and prevent them from surrounding the protagonist.

A unique battle - your main goal here is to fill the blood bar located on the top of the screen. The bar will continuously fill as you kill the monsters that will soon start to appear in the area.

When the encounter begins you should consider applying the necrophage and/or vampire oil on the silver sword. Additionally, you should check whether Geralt has the Black Blood elixir in his inventory and drink it. Finally, set the Igni sign as your active one. Different types of monsters will appear in the ruins - Scurvers, Rotfiends, Ghouls. Furthermore, more powerful, vampire-like enemies will start appearing in the area as the battle progresses - such as Katakans or Fleders - which can perform long pounces and deal large damage in melee combat. Eliminate the enemies one by one and try not to get surrounded by a larger group. Don't try to chase after every single creature in the ruins - your task is to fill the blood bar.

Watch the cut-scene showing the acquisition of Regis' blood and the process of making a potion. Drinking it will allow Geralt to experience a vision. This will give you a new clue associated with Dettlaff's whereabouts. Examining it is a part of the Lair of the Beast main quest.