During this quest you will find all six diagrams of Grandmaster Griffin Gear. You can learn about this quest by encountering grandmaster Zdravko in Beauclair during the Master Master Master Master! side quest (or it can be added to your journal after you find one of the diagrams on your own). The diagrams can be found in any order you want, but it is better to follow the successive steps of this quest. Thanks to that Geralt will not only find new diagrams, but hints about the locations of next parts as well.

Important - Crafting Grandmaster Griffin Witcher Gear is possible only if Geralt has mastercrafted objects from this Witcher school. If you don't have these objects, then you will have to use additional crafting materials for creating them. 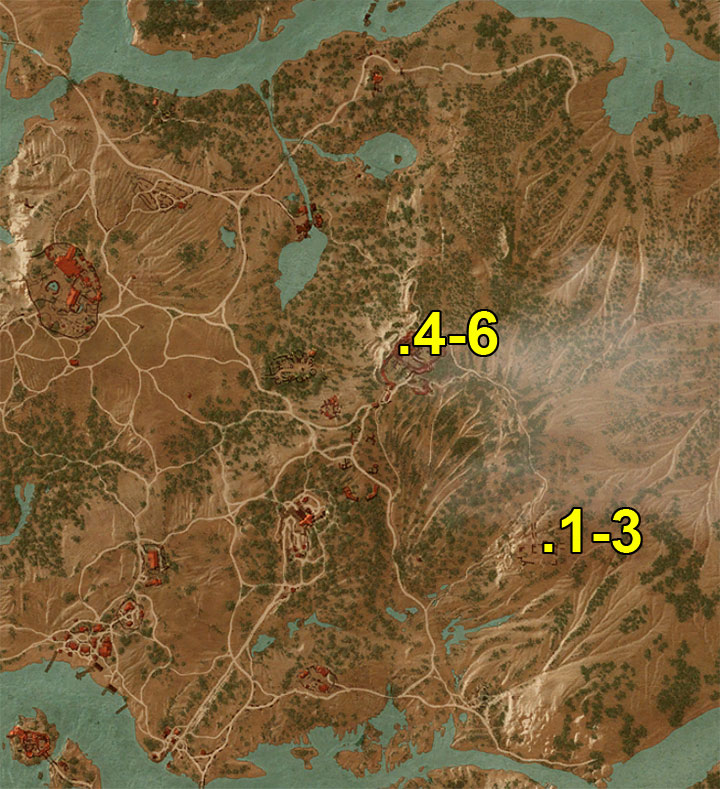 Go to the ruins of Fort Ussar 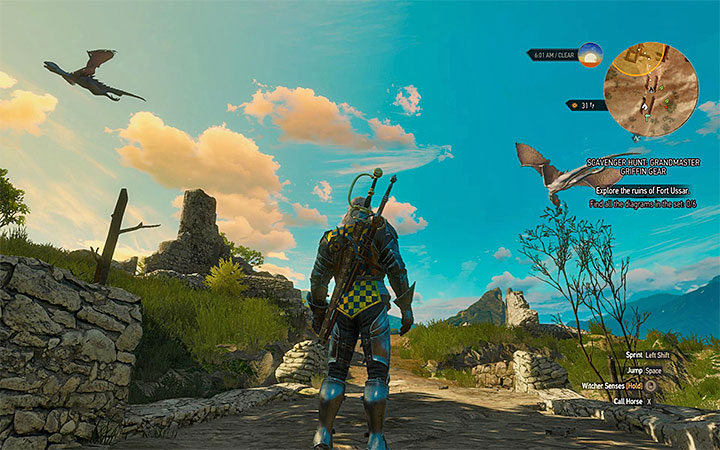 Your destination is the Fort Ussar Ruins located in the eastern corner of the map. You must be very careful because two giant dragon-like creatures called Slyzards are flying above the ruins. Fighting them isn't mandatory and it is recommended to avoid them. But if you are attacked and forced to fight, then consider using the Aard Witcher sign which can take the monster to the ground and temporarily stun him. In addition to that you can use the draconid oil and take advantage of the ruins by hiding from fireballs behind them.

Explore the ruins of Fort Ussar 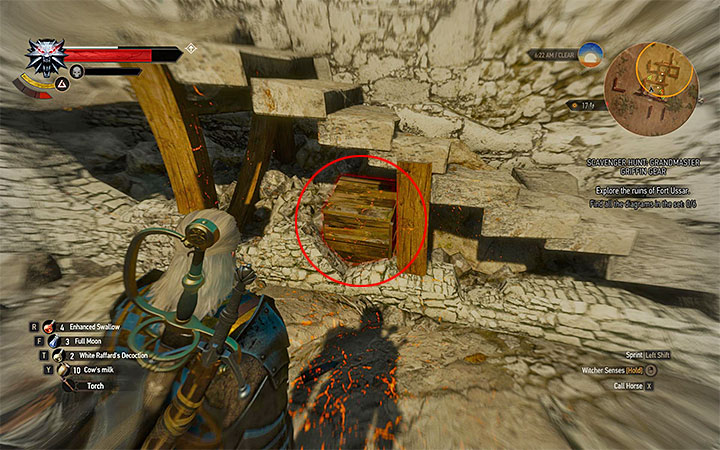 Go to the castle on Mont Crane 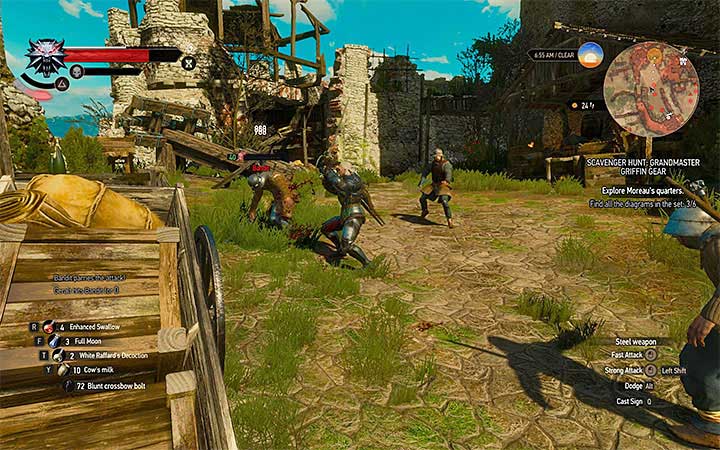 You must only secure the lower part of the castle courtyard

The next place which you must reach is the Mont Crane Castle. It is nearby the ruins, slightly to the northwest. The castle is a gang hideout (one of the points of interest on the map). It means that a large group of bandits can be found there. You don't need to secure the whole area or defeat the leader of bandits in order to find the diagrams. It would be very hard anyway since the main part of the castle is occupied by bandits on 48 experience level. Because of that you should only deal with the enemies at the entrance to the palace and the ones that occupy the lower courtyard (all enemies should be on level 40). 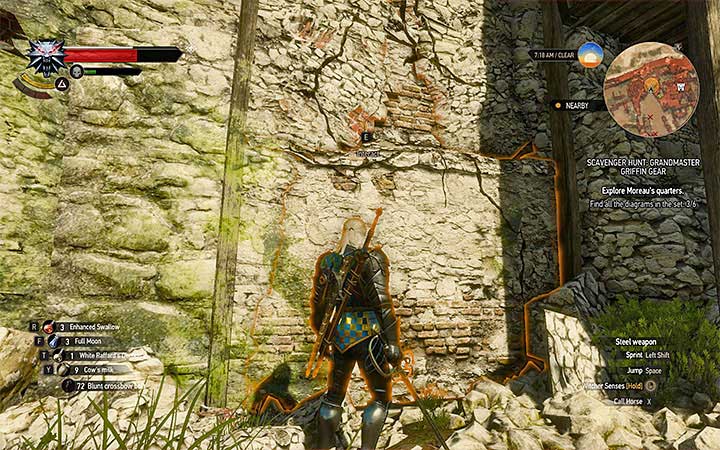 Remain on the lower courtyard after securing it. Find the illusion shown on the above picture. Geralt can remove it by using the eye of Nihaleni (the artifact from the basic version of the game). It will uncover an entrance to a secret quarter. 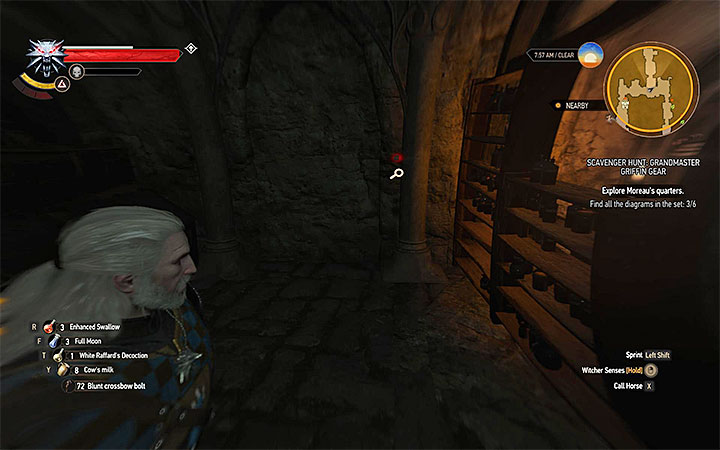 Start exploring the narrow corridors. On the wall in one of the rooms you will find the button shown on the picture (use Witcher Senses to find it easier). Enter the next room after pressing it and find the chest with Moreau's Journal. By reading the journal you will learn about an inactive portal to prison.

Find the crystal that activates the portal 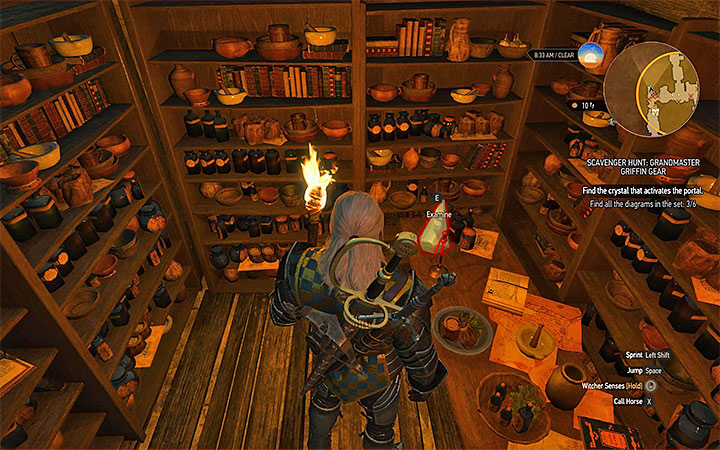 Go back to the previous area of Moreau's secret quarter. The Power Crystal you are looking for is on the left table shown on the above picture. Pick it up and go back to the corridor unlocked by pressing the button. Put the crystal in the inactive portal at the end of the corridor and then use Aard sign to activate the portal.

Step through the portal 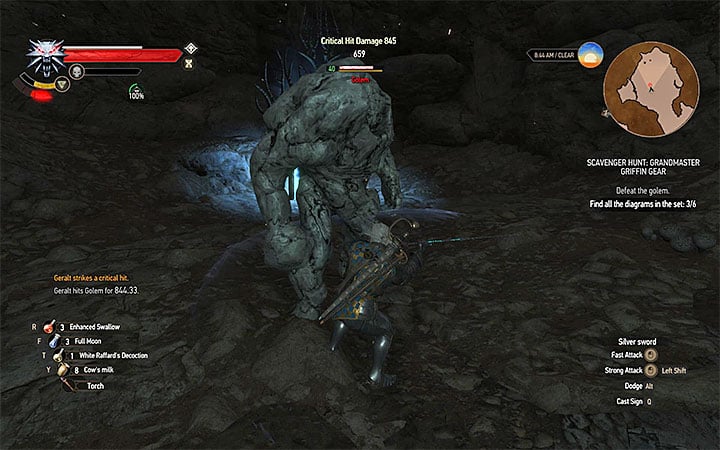 Jump towards the golem, perform a few fast attacks and move away before he attacks

Just after passing through the portal Geralt will be forced to defeat a level 40 golem. During this duel you should use elemental oil and Quen sign so that golem's attacks won't take great numbers of your health points. Utilize the fact that the golem is very slow and try performing 2-3 fast attacks every time after the enemy performs an unsuccessful hit. It will guarantee a rather fast victory. 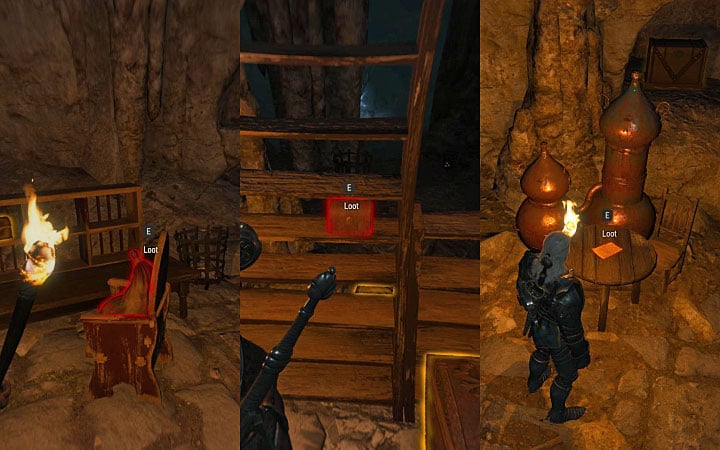 Important: In order to leave the prison you must use the eye of Nihaleni on the new wall which is an illusion. Watch out as Geralt will enter a nest of strong monsters - get to the surface as quickly as possible.