Turn and Face the Strange is one of the more complicated quests of the expansion, but you should take care of it as fast as possible since by doing so you will unlock access to Witcher mutations. The quest is mostly about finding doctor Moreau's secret laboratory. In order to do it, you must journey through large underground ruins in which there are several riddles to solve. 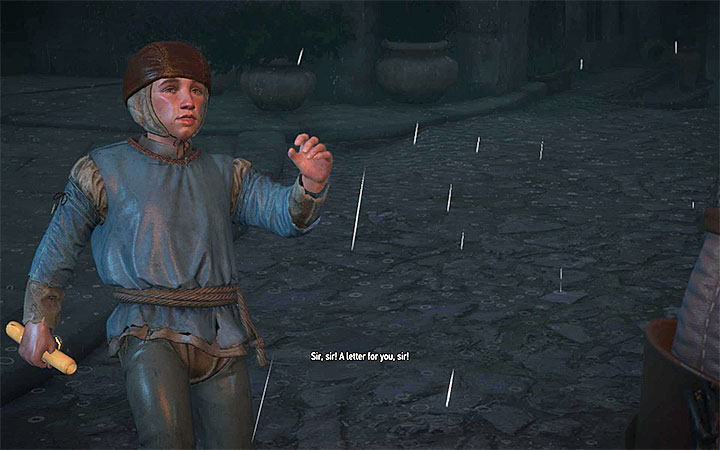 Wait for the cutscene during which a messenger will appear

You will have chance to start this quest after completing the Blood Run quest (after your first encounter with the Beast of Beauclair). During your stay in Beauclair (map M4) you should be accosted by an envoy who gives you a letter. It has been sent by the lady of Geralt's heart from the core campaign (Yennefer, Triss or Keira Metz). You can either tell the envoy to go away, or give him a tip, thanks to which you will complete one of the Trials of Virtues, for the There Can Be Only One side quest. From the letter Geralt will learn about the lost laboratory of doctor Moreau who is said to have been researching Witcher mutations. The objective of the quest is to find the laboratory of the scientist. 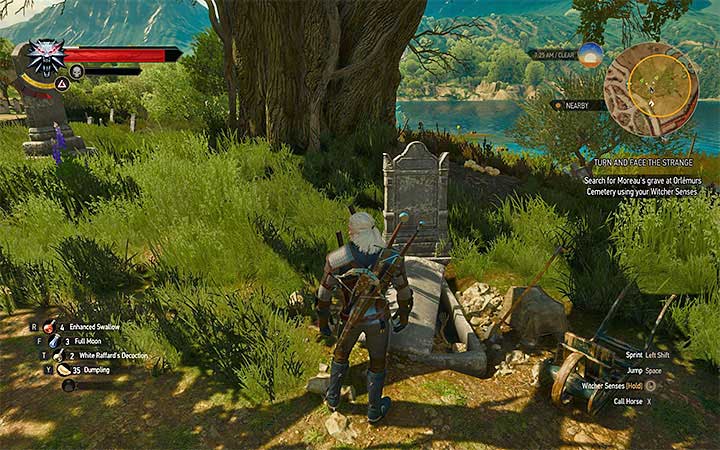 Olermurs Cemetery is located in the southern part of Beauclair (M4,2). After reaching the destination, don't get close to the water so that you aren't attacked by drowners. The grave you are looking for is shown on the above picture - it is located next to the giant tree.

Start with inspecting the moved tombstone and then use your Witcher Senses to find the footprints and determine that they end at the main road. Go back to the grave and check the skeleton inside.

Check the location of Naev'de on the map Yennefer sent you 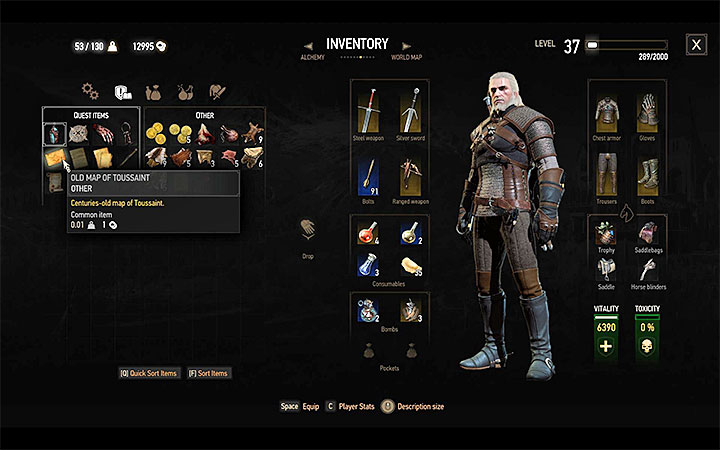 Find the map in Geralt's inventory

Open your inventory and select the Old Map of Toussaint. You don't need to do any additional actions, Geralt will analyze it himself. 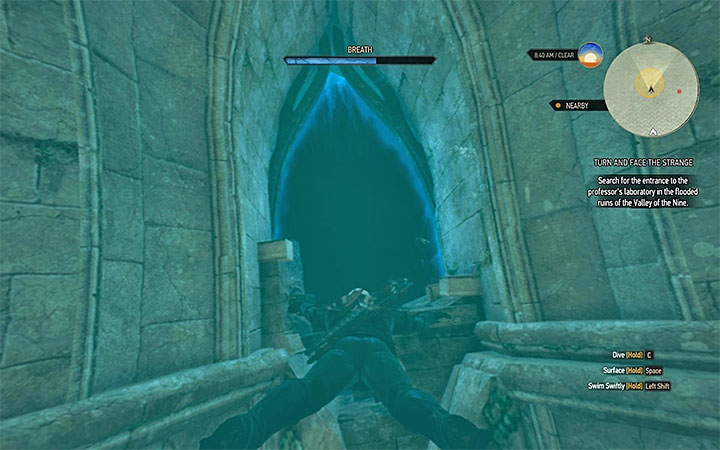 The ruins are located east of Beauclair. Go there. Once you arrive, first move along the coast. Once you get close enough to the mission marker, jump into the water and dive. Use the crossbow to get rid of the nearby drowners and then find the portal shown on the picture (M5,1). Swimming through it will move Geralt to the underground ruins. 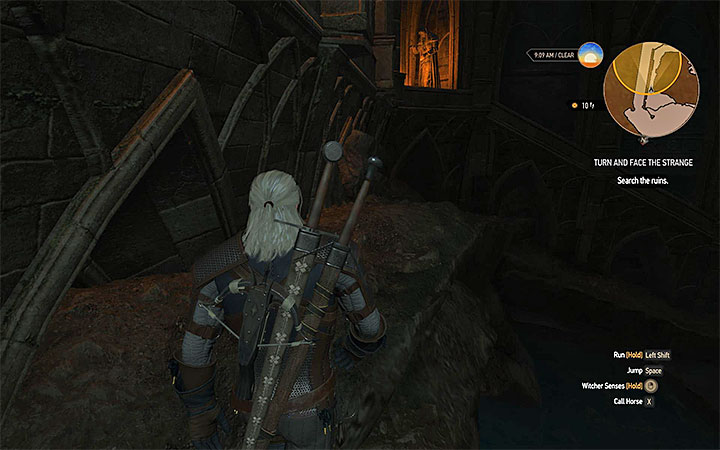 Exploration of the ruins is rather linear but you can inspect the items you find on the way and examine the side corridors. Soon you will reach the corridor in which there are spike traps on the ground. You don't need to walk through the corridor (you can do it by running when the spikes are hidden) since nearby there is a narrower passage without any traps. After you choose it you can reach the end of the corridor with the spikes and plunder the chest there (inside you will find the Melltith sword). You can also carefully jump to the lower level and continue the exploration. Enter the small arena where the ruin guardians will activate.

The encounter with the two panther-like Guardians isn't very complicated. Use the silver sword and help yourself with the Igni sign if needed. You should depend on fast attacks and eliminate the guards one after another.

Continue the exploration of the ruins. You can follow the main corridors or check the side ones. Thanks to the latter you can find the blood trail of the thief who explored the ruins before Geralt. Use Witcher Senses on your way and you will find Professor Moreau's diary. Climb up to the upper room and fight one more Guardian. After you kill the monster proceed to the next area.

Find a way to open the doors 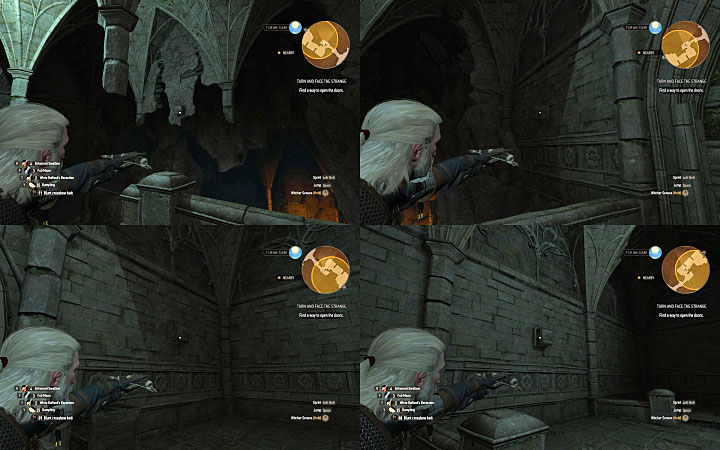 Examine the closed door in the new room and listen go Geralt's hint. Opening the door isn't very complicated - you must use the crossbow to hit the four buttons on the walls shown on the above picture. The button on the wall to the left of the door is the hardest to find. The remaining buttons can be located very easily. Enter the neighboring room after unlocking the passage. 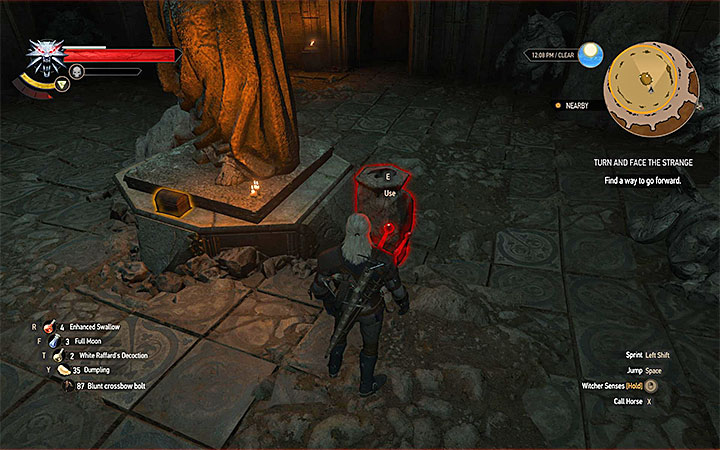 Soon after you enter the new room one of the Gargoyles will activate. Before you attack the monster, check whether Geralt has some Dimeritium Bombs and elemental oil. Both items can be very helpful against this opponent. In addition to that you should set Quen as your active Witcher sign. Before that you shouldn't attack the gargoyle. Use to your advantage the fact that he isn't too agile. Examine the corpse of the gargoyle after winning the battle and take the Gargoyle Paw. Then place it on the base of the large monument (shown on the above picture).

Find a path through the portals 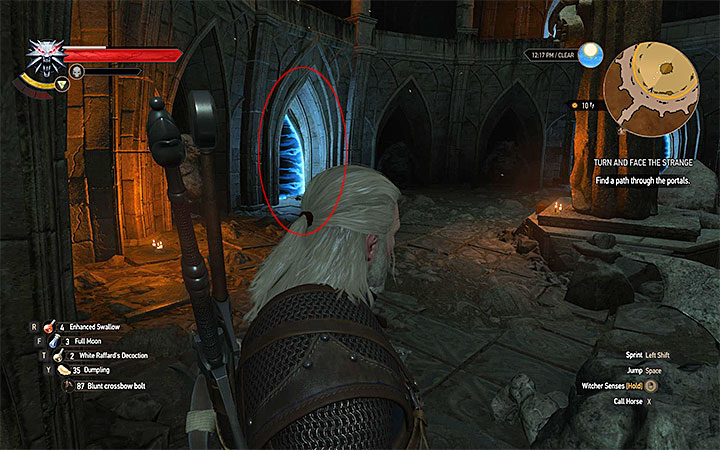 Now you must solve another riddle by the selecting correct portals. More specifically, you must go through three different portals. The direction in which the large statue is facing will give you a hint which portal you should use. Luckily, if you make a mistake, Geralt won't die, he will only return to the starting point. First select the portal on the left from the entrance to the portal room - it is shown on the picture. 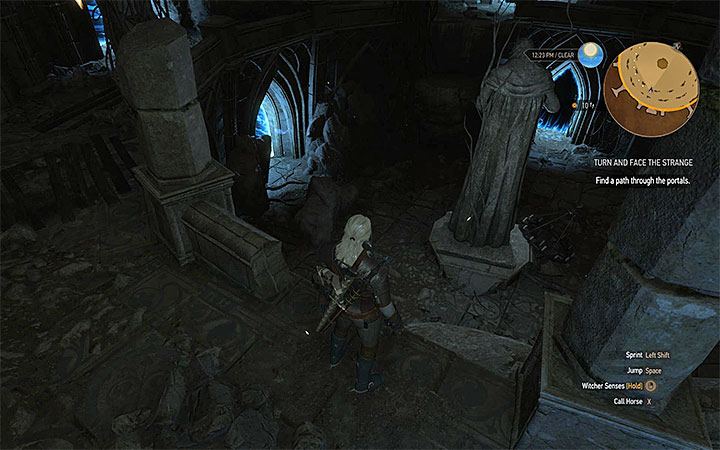 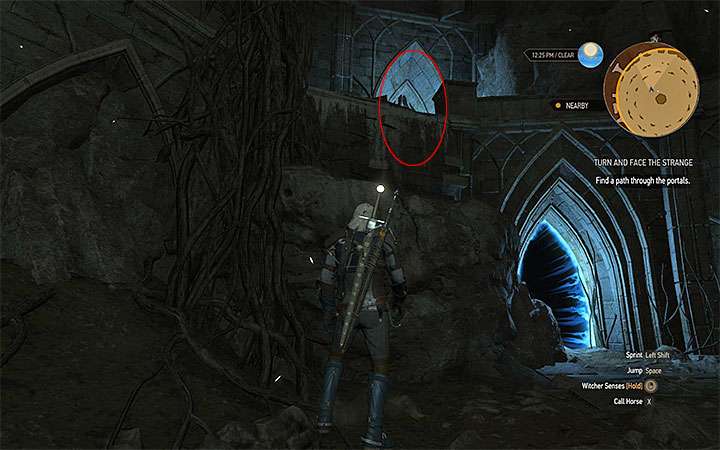 You will reach the highest floor of the portal room. Ignore the portals that are on same level as you. Jump to the lower floor in the place shown on the first picture and climb on the new balcony marked on the second picture. Now you can use the portal on the upper balcony (the one towards which the large statue is turned). 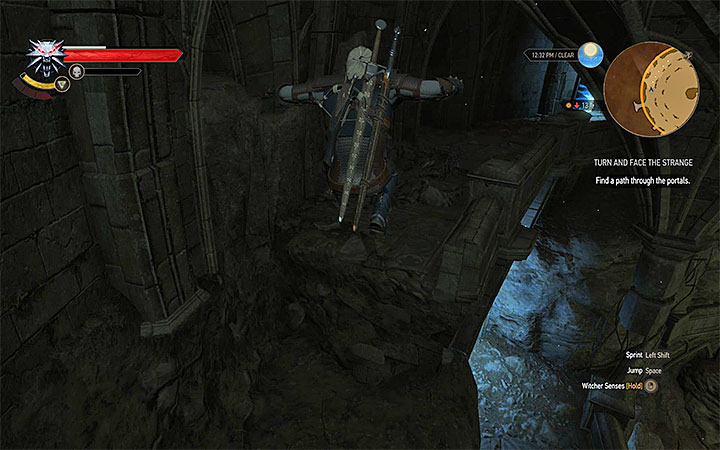 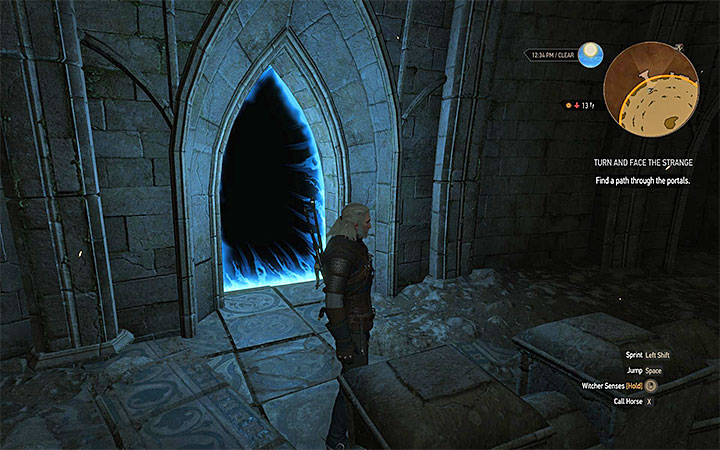 Start walking through another balcony after the portal transports Geralt to a new place. Ignore all the portals on your way. You must reach the place shown on the first picture and jump over the ruined part of the balcony. Continue the walk and reach the last portal which is shown on the second picture.

Use the Witcher Senses to search the laboratory

Examine the area near the stairs in the laboratory. You will find a megascope which can be used for viewing some previously recorded messages. Watch the three currently available recordings - the first, the third and the fifth one. Finally select the option to summarize the available information. 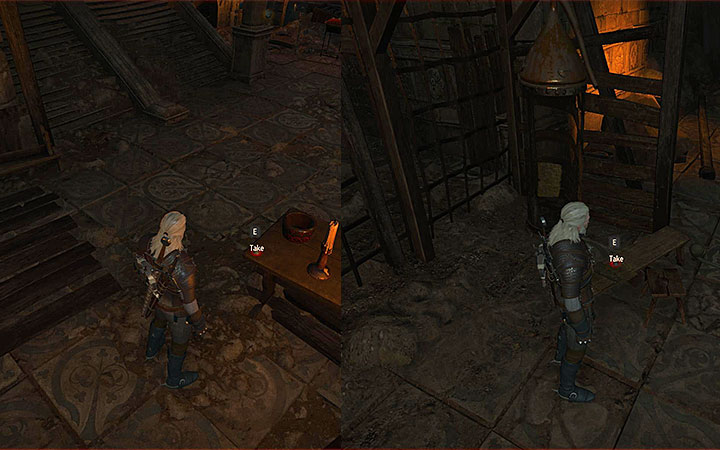 This step isn't mandatory, but you should complete it anyway since finding two missing Megascope Crystals won't take you much time. Use Witcher Senses - the locations of the missing items are shown on the picture above. You can go back with the crystals to the megascope, place them in the device and watch two new recordings (the second and the fourth one). 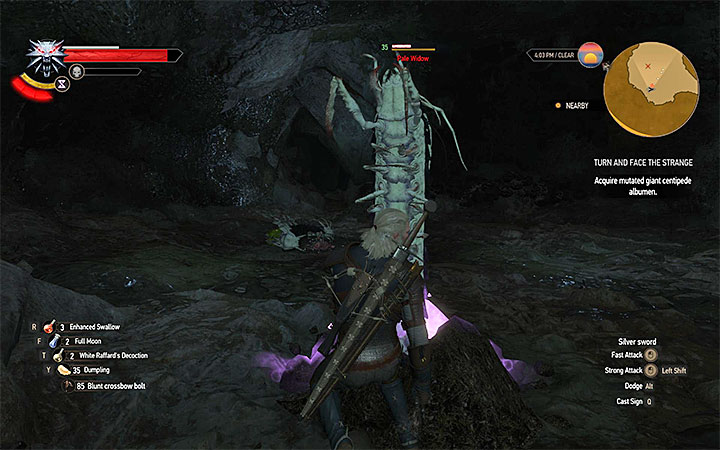 Find the hole in the wall which allows you to explore the caves neighboring with professors Moreau's laboratory. In one of the rooms Geralt will face a Pale Widow. Before attacking the monsters (as there's more of them later on) you should use the insectoid oil. During the battle you should use the Yrden sign and remain in the magic circle in order to encourage the monsters to appear inside it. The Pale Widow will be paralyzed after it appears above the ground. Use it to immediately attack the uncovered part of its body. 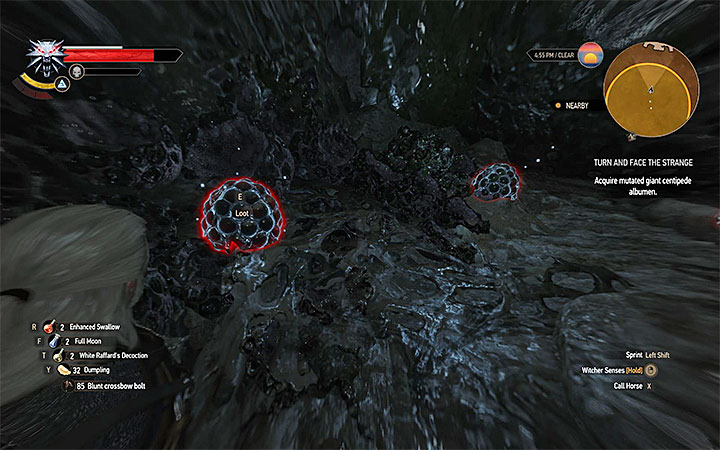 Having won the battle go deeper into the caves and deal with another Pale Widow. Then find the eggs shown on the above picture. Interact with any egg and obtain the Mutated Giant Centipede Albumen. 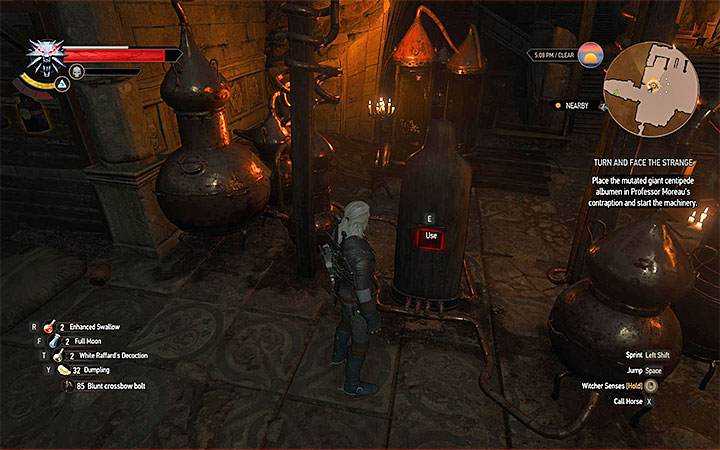 This is where you must place the albumen

Now you can go back to the laboratory. Examine all the items in the room (use Witcher Senses). In one of them you can place the albumen.

Get undressed and activate Moreau's contraption

Open your inventory and have Geralt take off all of his armor. In addition to that you must remove his two swords and the crossbow from the active slots (you don't need to remove bombs and consumables). Only after these actions you should interact with the device and watch the scene with Geralt's transformation. 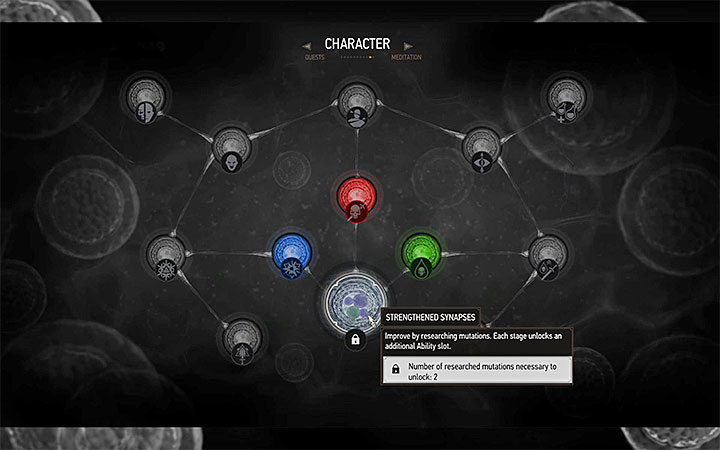 Before leaving the laboratory you should open the character development screen and check how the mutations work (they have been described in detail in a separate chapter of our guide - the Mutations page).

In order to leave the location you must find the inactive portal in the laboratory and use the Aard sign on the nearby crystal. Now you can use the portal.