The quest itself is very long, but it does not offer any significant branches leading to completely different results. Still, it is also very diversified. It consists of some pretty demanding fights and a solid portion of exploration making use of Geralt's witcher senses. 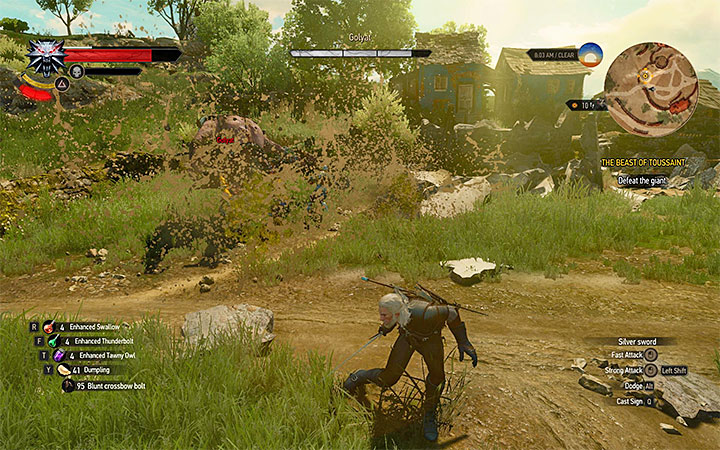 After arriving at Toussaint duchy Geralt will be located at the Dulcinea Windmill (M1,1). The quest will start with a battle against a giant Golyat whose health bar is visible at the top of the screen. Take some time to familiarize yourself with the basic attack patterns of this powerful creature. The strongest attack this monster has is a whirlwind, during which the beast is trying to attack all the characters standing around it. Another dangerous attack is a strike to the ground with his melee weapon. It is so powerful that it produces a shock wave capable of stunning Geralt or even knocking him off his feet. 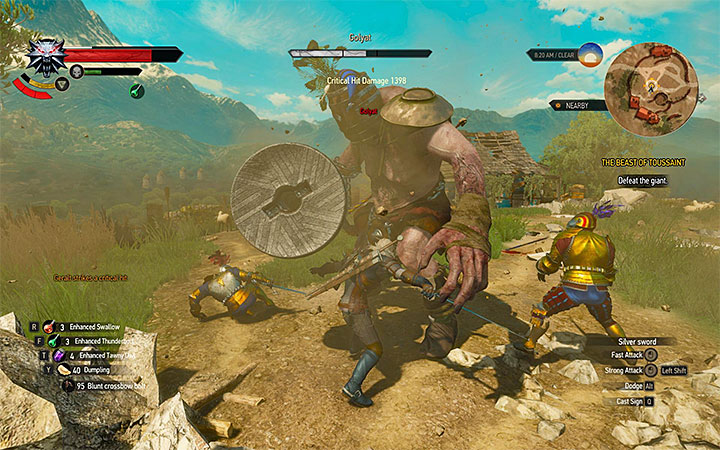 Before the duel with Golyat check if Geralt has ogre oil in his inventory. In addition, set Quen as the active witcher sign. The tactics are as follows - activate Quen's shield, wait for one of Golyat's slow attacks, then approach him quickly after a failed attack on his part, and use the moment to inflict some damage. Be sure to jump back from the boss after landing a few blows, so that Golyat won't have time to respond to your attack. No need to worry about other people involved in the fight, because they cannot die. After winning the battle listen to a new conversation. You will be given loads of experience points and Golyat Trophy, which grants a 5% bonus to experience gained by killing monsters).

Follow Milton to the place where the body was found

Saddle up and follow the main road and Milton. Soon you will reach the Cockatrice Inn, where the body of a person murdered by the mysterious monster was found.

Use your Witcher Senses to search the riverbank 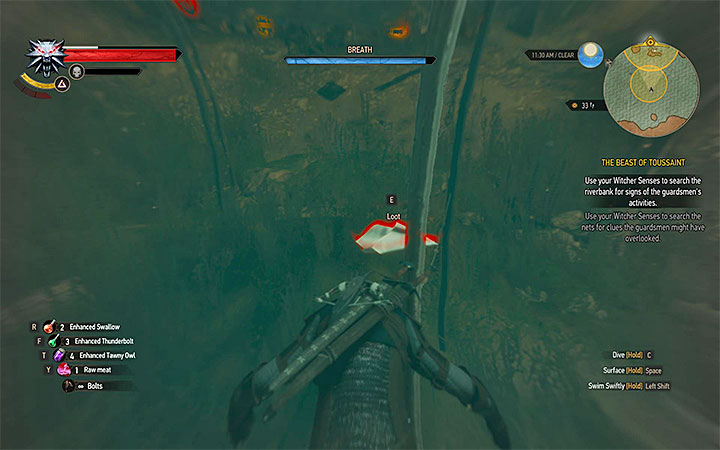 Reach the riverbank and activate witcher senses. Find the footprints and follow them. Nearby there is a group of Scurvers that you must defeat. The things that will help you are the necrophage oil and, for example, the Igni sign. In addition, remember to jump back from the monsters after they are on the verge of death, because they will explode. Having swept the area clean resume your search. Inspect the chest, ripped clothes and bloodied fishing nets.

into the water, dive and start inspecting further objects. The most important is the one depicted on the screenshot, for upon inspecting it you will find a Handkerchief monogrammed d.l.C.. Return with your discovery to Milton.

Follow Milton to the Cockatrice Inn located on the hill. After you enter the inn a new dialogue scene will begin. You can ask some additional questions or immediately set out for the place where the corpses of the victims are stored.

Leave the tavern, saddle up and head for the Corvo Bianco Vineyard. Upon reaching the place Geralt will find a rather unpleasant sight of massacred bodies. It will be necessary to determine who is responsible for this state of affairs.

Use the witcher senses and start inspecting the bodies laying around the abandoned vineyard. Having seen two or three corpses Geralt will determine that a bruxa (variety of a vampire) was responsible murdering the locals. An entry on those monsters will appear in the bestiary and it would be wise to familiarize yourself with it before taking further action. According to the information from the bestiary you can make some preparations before fighting a bruxa, namely put a vampire oil on your blade and check the characters inventory for two things: the Moon Dust bombs and the Black Blood potion. Additionally, set Yrden as your active witcher sign.

Important - You do not have to (although you can) check all the bodies in the vineyard. If you decide to do so, however, you should look for the discarded cloak and examine the overturned cart, along with nearby traces on the ground.

Find the Beast's victim's body in the cellar

The entrance to the cellar is located next to the overturned cart. Once inside you can use witcher senses to help you in exploration and following the footprints, but it is small enough location that you can't really get lost in it. Along the way you will encounter more corpses, but there's no need to search the bodies. Your destination is the main room of the basement. There Geralt will encounter a bruxa and after a brief exchange of words a fight will break out. 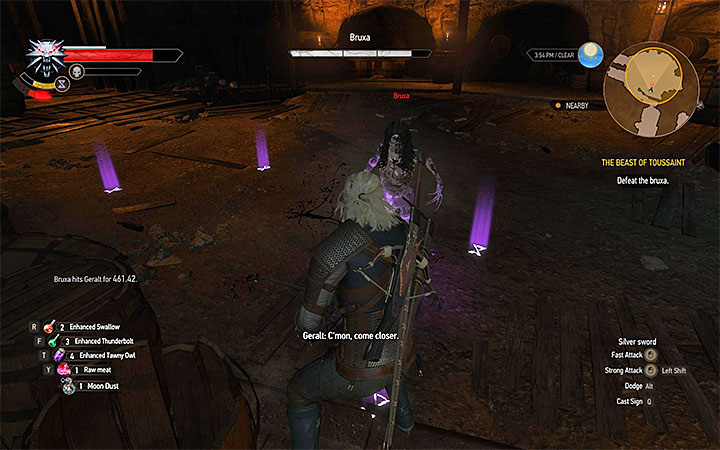 Use the Yrden sign, wait for bruxa to show herself and attack her when she is inside the magic circle

The Bruxa of Corvo Bianco is treated as a unique opponent and her health bar is visible and at the top of the screen. Once you regain control of Geralt, try to drink the Black Blood potion, so that at least some of the damage inflicted by the bruxa will find its way back to her. In addition, once again, make sure that Geralt puts vampire oil on his sword. Bruxa is a very agile opponent and you will have to stay on the move all the time so as not to give her a chance to land a surprise attack.

The Yrden sign will be a substantial help in defeating the bruxa. Once you cast it, stay inside the magic circle and wait for the bruxa to appear. Take advantage of the circle's weakening effect and proceed to attack her when she's inside. If you want, you can also use Moon Dust bombs as advised by the game, though even sword attacks alone will be sufficiently effective. Repeat the procedure until you have dealt with the bruxa.

Examine the body of the Beast's victim

The corpse lies where bruxa stood at the time you entered the basement. Inspect it - you need to examine the head (Geralt will find a Pouch Filled with Florens), the corpse's chest, and the Unusual Severed Hand, which Geralt will take with him. The examination allows Geralt to determine that bruxa isn't in fact the one responsible for the series of murders.

Find Palmerin and ask him to take you to the duchess

Leave the vineyard and head south. You need to reach the Tourney Grounds. Upon your arrival, look for Baron Palmerin de Launfal and initiate a conversation with him. The replies chosen during this meeting will not be very significant. The conversation ends with a longer cut-scene and Geralt will be forced to a duel a new, very powerful monster. 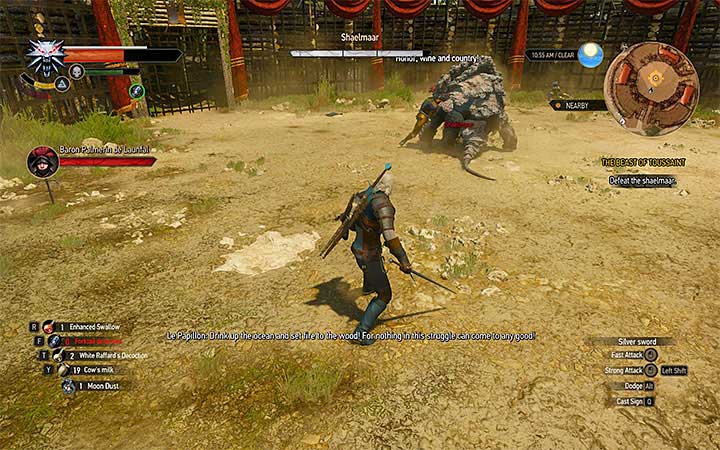 Shaelmaar is a tricky opponent. The monster deals high damage and his thick armor successfully blocks most regular attacks. Similarly as in the case of other duels with strong monsters, devote some time to prepare yourself for the battle - check if Geralt has Samum bombs in his equipment and relic oil. Instead of the recommended Aard sign you should focus on using Quen thanks to which each attack of the monster (especially the random ones) will take away much less of Geralt's health.

Important - aim for a swift resolution of the duel; you cannot allow the energy bar of Palmerin, who is helping Geralt, to be completely depleted. Luckily, Palmerin isn't a weak ally and you don't have to lure the monster away from him at all cost. 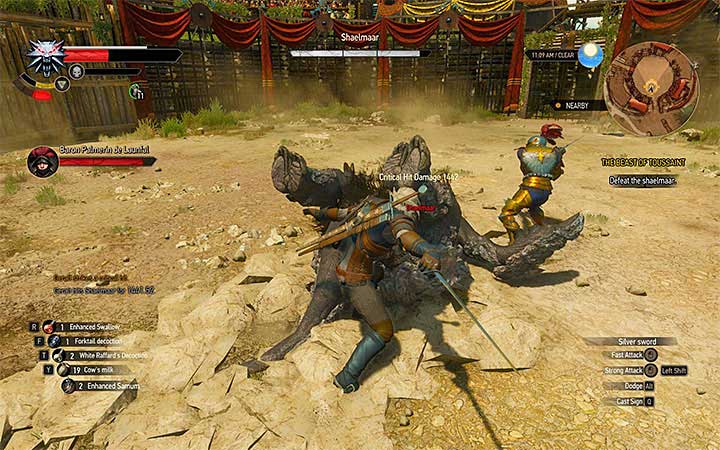 The best way to defeat the shaelmaar is to position yourself at the edge of the arena and wait for the opponent to start rolling towards you. Jump away just before he hits you (or rely on Quen). The enemy will fall on his back, as shown on the above picture. That's when you can attack him with the sword, which will deal very much damage to the monster. Most of the duel will look similar. The only exception is the situation when the boss losses 2/3 of its health. The shaelmaar will bury himself in the ground then and start throwing small rocks at you. You should move away to a safe distance and wait for this attack to end. 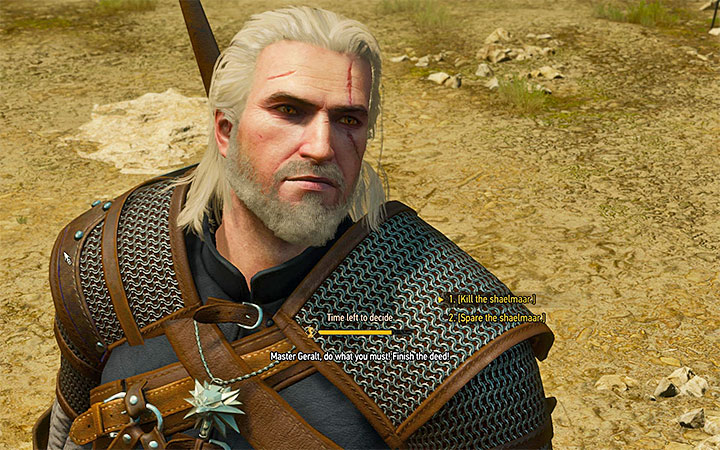 Now you can finish the shaelmaar off or let it live

After winning the duel you can decide whether Geralt should finish off the defeated shaelmaar or let the beast live. The decision won't have any immediate consequences.

Now Geralt must meet with Duchess Anna Henrietta and with Damien de la Tour. The meetings are very linear. Receiving the Deed to Corvo Bianco is an important part of the meeting with the duchess. From now on Geralt will have his own property and he will be able to rebuild the vineyard - it will be a part of the newly unlocked Corvo Bianco side quest.

After completing all conversations you must follow the duchess - first by using the horse and then on foot. Your destination is the Palace Gardens.

Retrieve the golden fish from the pond 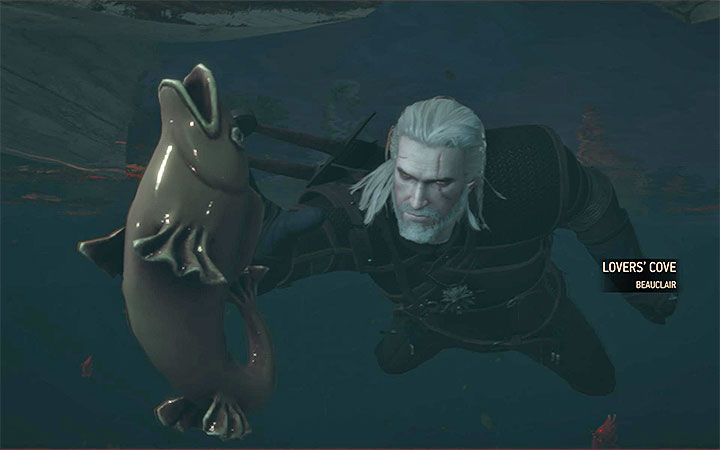 The fish you are looking for

During the final phase of the conversation with Anna Henrietta you can ask her about a golden fish or about a unicorn, it is not an important decision though. To find the golden fish go to the pond located in the Palace Gardens. Jump into the pond, dive and activate Witcher senses. Swim around and examine some fishes. Eventually, Geralt will find the fish he is looking for and after a short cutscene he will obtain the Key from the Golden Fish.

Look for the "unicorn" in the clearing in the palace gardens

Now you can focus on the unicorn in the gardens. Attempting to catch the animal will end in failure and as a result you will be forced to obtain a treat.

Use your Witcher Senses to find a treat for the "unicorn" 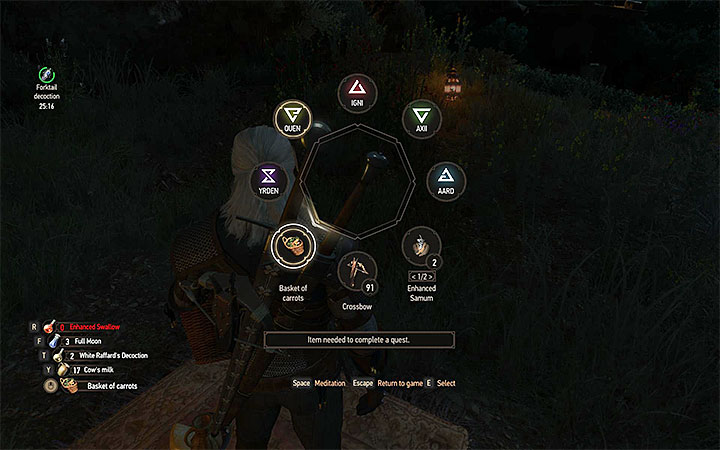 Examine the area marked on the minimap and take the Basket of Carrots from the blanket. Open Geralt's inventory, make sure that the basket is in the active slot and select it from the drop-down menu (as shown on the above picture). Now you just have deliver the treats to the unicorn. As reward you will receive the Clue from the Horn of a "Unicorn".

Go back to Anna Henrietta in the Gardens. During the conversation you must point at the Greenhouse (third dialogue option) as Milton's location or leave it to the duchess to successfully connect all the dots. After reaching the greenhouse a cutscene will start, showing the Beast making its escape. At the same time a new main quest, Blood Run, will be unlocked.