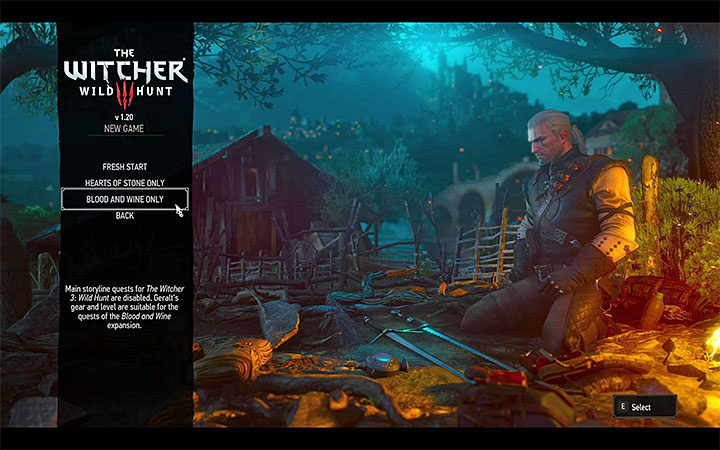 One possibility is to begin the expansion using a fresh, dedicated character

The new adventure offered by the Blood and Wine expansion can begin in several ways, which are described below.

Important - Prior to the game, make sure that The Witcher 3 is updated to version 1.20 or later!

Continuation using a character from the base game

The best solution is to continue the adventures with a character that you have used so far in the base game and optionally also in Hearts of Stone. If you have the main game installed, Blood and Wine should automatically recognize the existing save game data. If by any chance you have in the meantime uninstalled Witcher 3, your saved games should remain on the disk with their default location being: user_name\Documents\The Witcher 3\gamesaves. In this case, simply reinstall the game and your saves should become immediately accessible.

Very important - make sure that your Geralt has achieved level 34 or higher. Otherwise, the challenges offered by Blood and Wine will most likely prove to be too big for him. Of course, there's no need to start the expansion as soon as you install it. You can first sufficiently develop Geralt in the main campaign, and then point your attention to the adventure from the second expansion.

If you wish, you can start the game from the very beginning. Should you decide to do so, the campaign will automatically integrate Blood and Wine into its structure. The important thing is that you will be unable to begin the plot of the expansion too early in the game. An opportunity to set out for the duchy of Toussaint appears no earlier that after completing the main quest A Poet Under Pressure in Novigrad, still you should first make sure Geralt is at least level 34.

This option is the best solution if you do not have any saved games and if you are only interested in playing through Blood and Wine. You can use a character generated by the game. Geralt will be automatically leveled up to level 34 (minimum suggested for starting the expansion) and will have the basic equipment (weapons, armor, oils, potions, equipment for Roach, etc.), giving him a reasonable fighting chance against the challenges that await him in the expansion. You need to know, however, that by choosing this option you will not be given immediate access to items like witcher gear or complete decks of Gwent cards from the core game. Furthermore, an "instant character" has, by default, completed all the quests from the main storyline, so you will be unable to complete them with such a character.

The journey to the duchy of Toussaint 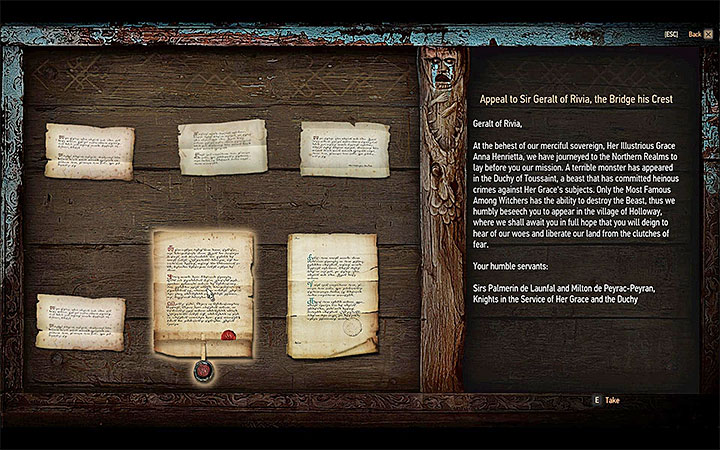 The quest Envoys, Wineboys is closely associated with your journey to Toussaint, it should be automatically included in the journal after you have fulfilled all the requirements listed above. After you decide that you are ready to start the new adventure, visit one of the notice boards in Velen and find the invitation as shown in the picture above. Pick it up and read it, then head to the village of Holloway to meet with Palmerin and Milton. 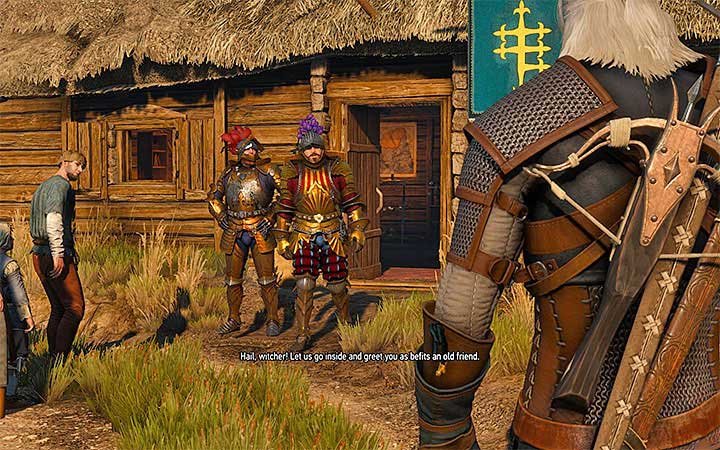 You need to meet up with Palmerin and Milton

Having reached your destination a cut-scene will be triggered, showing Geralt's meeting with the knights. You can agree to help Palmerin and Milton to get rid of bandits plaguing the nearby village before you depart (an additional fight), or you can simply persuade them to pass up on the fight and immediately listen to Anna Henrietta's invitation, as well as learn more about the mysterious monster harassing the duchy's residents. After this meeting is over, you will automatically travel to Toussaint and start a new main quest - The Beast of Toussaint.