This page of The Last of Us game guide contains a walkthrough of the Alone and Forsaken stage as part of the Pittsburgh chapter. Numerous clashes with bandits await for Joel and Ellie. In the first encounter the heroes will be taken by surprise by the thugs, but in the following ones the player can use sneak attacks. One of the major encounters of this stage has been enriched in our guide with a map, with positions of the enemies marked on it. 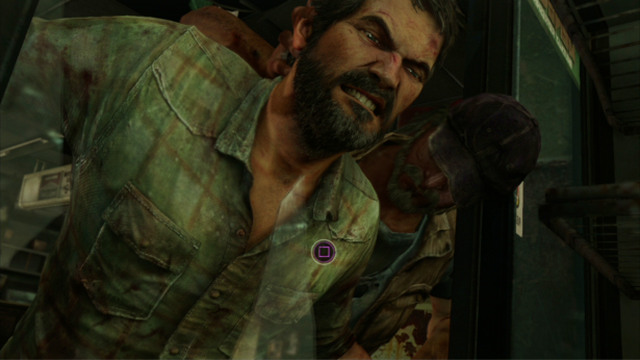 When the cutscene ends, start tapping the square as soon as possible, to avoid the broken glass and kill the assailant that is holding you. 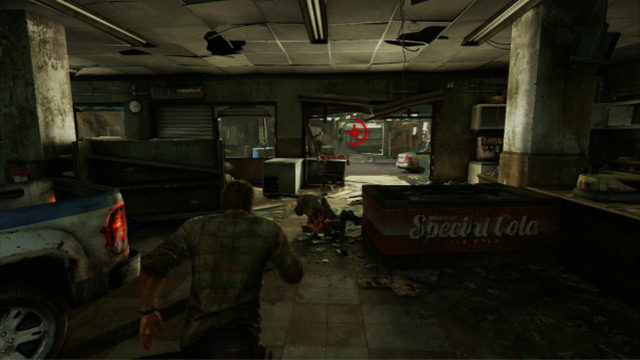 Then, you need to help Ellie who is also fighting a bandit. 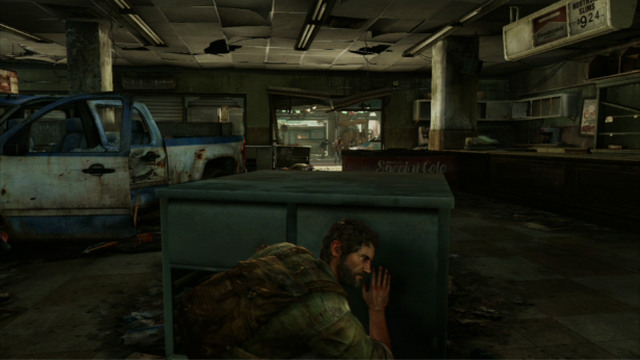 If you succeed, you will have to fight a longer fight with a group of the bandits. What counts here most, is the listening out skill and your accuracy, thanks to which you will know the enemy positions. 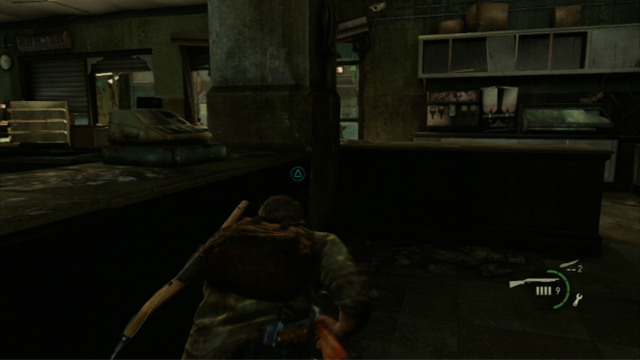 First, take out the enemy in front of you, using the rifle. Then, go right and kill the incoming bandits. 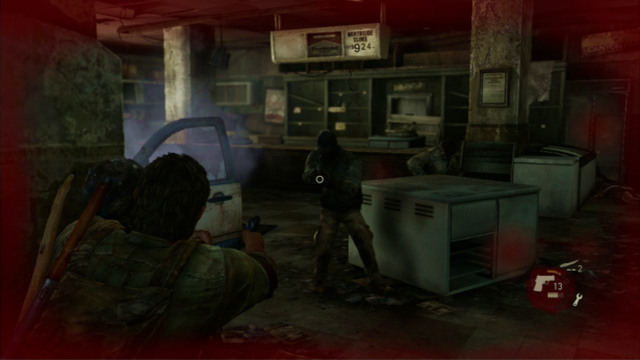 After you kill out the first wave bandits, the second wave will come in, through the smashed windows. Before they land on the ground, you can take them out using your shotgun. 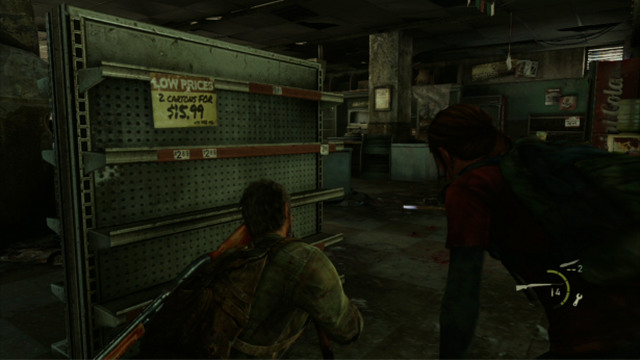 As soon as the last assailant drops dead, take to the exploration of this location. 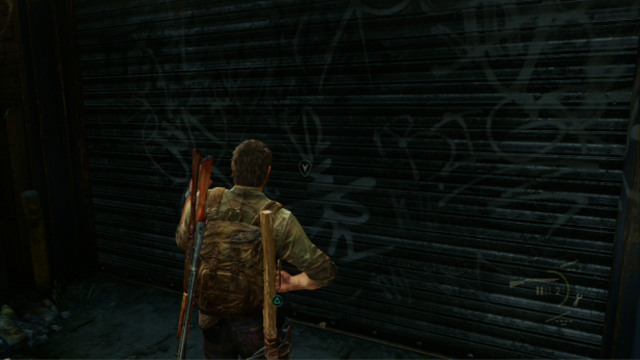 Once you are done checking every possible corner, open the garage door on at the left end of the valley. 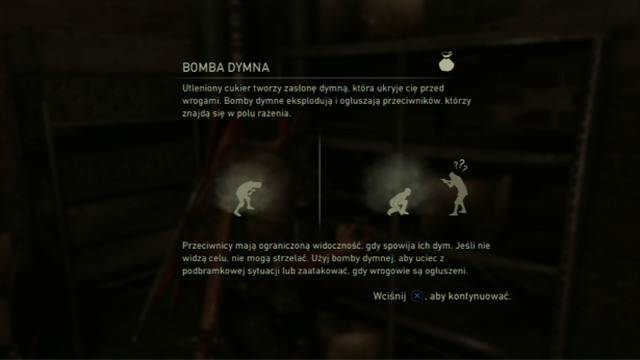 Inside, you will find tools to craft better equipment with, and a smoke bomb that limits the enemy's visibility and allows for approaching them without being seen. 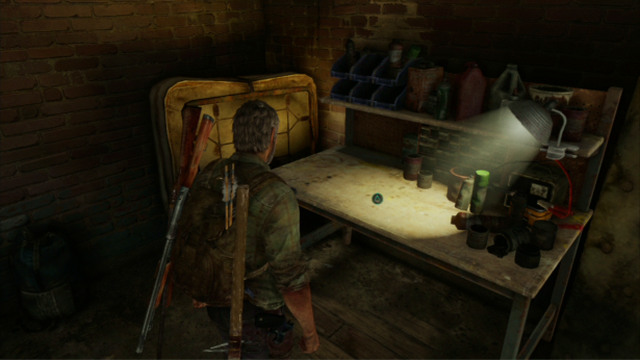 Behind the next door, there are stairs that lead up. Explore the first floor also, and check out the room at the end of the corridor where there is a workbench that you can upgrade your equipment on. 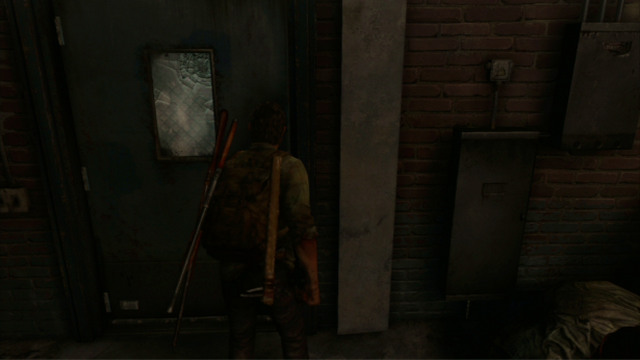 When you finish, leave through the door to the left. 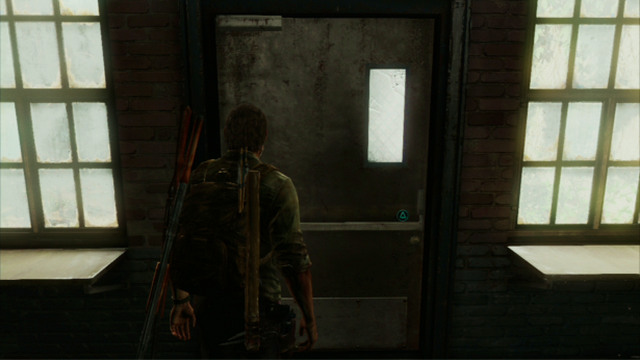 Climb the stairs to get to the first floor, and jump down to the street level. 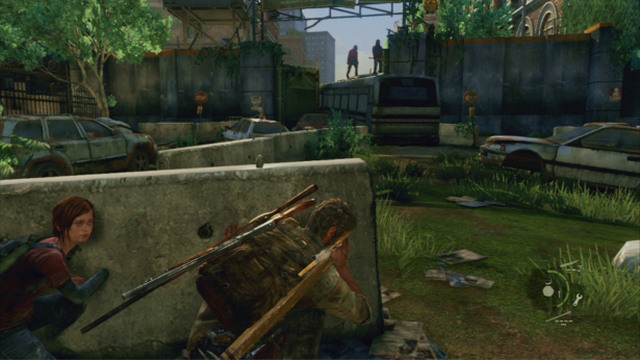 As you go to the right, you will reach a place where you will hear a gun fired. Run quickly into the right corner of the location and take cover behind the car wreck. Soon after, there will, be three men approaching from the left. 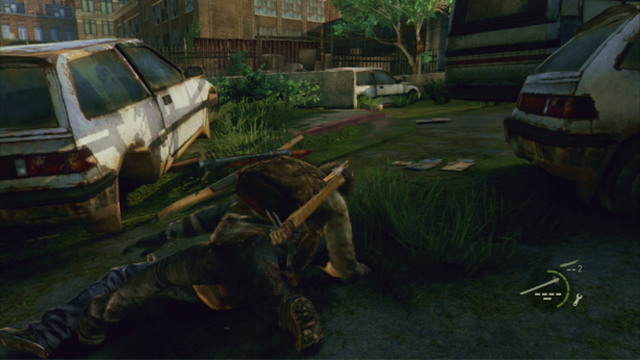 After you take cover, wait for the nearest enemy to stop and wake several steps while turned away from you. You will then have the opportunity to kill him silently. Eliminate the remaining two in a similar manner after they walk their ways. 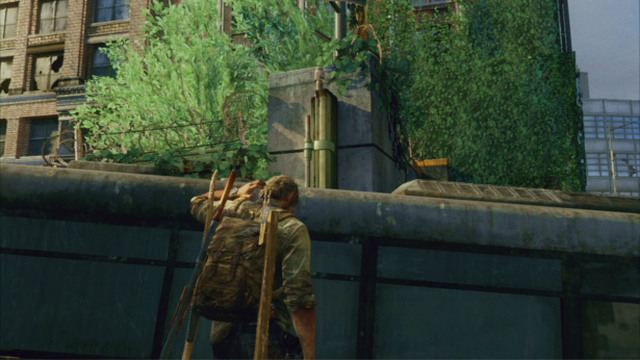 Once you have cleared the area, climb onto the car, and then onto the bus and jump over the fence. 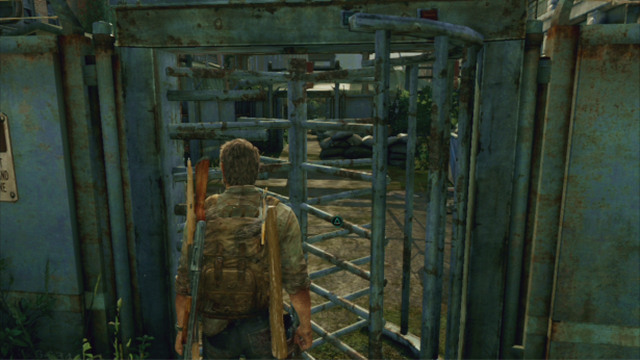 A bit later you will run into a turnstile. Behind you will have to face another group of bandits. 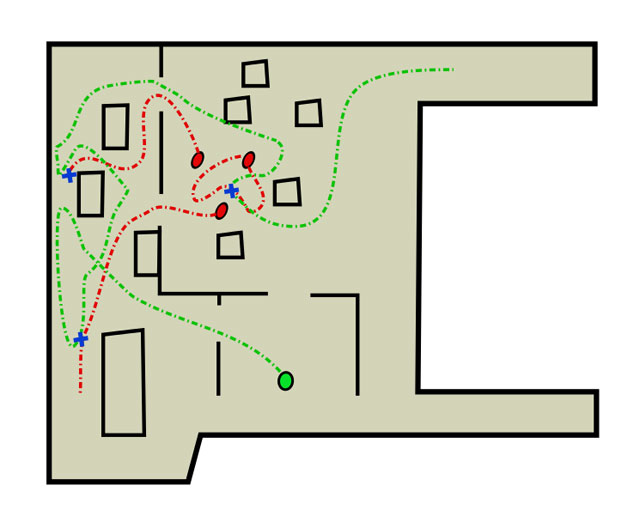 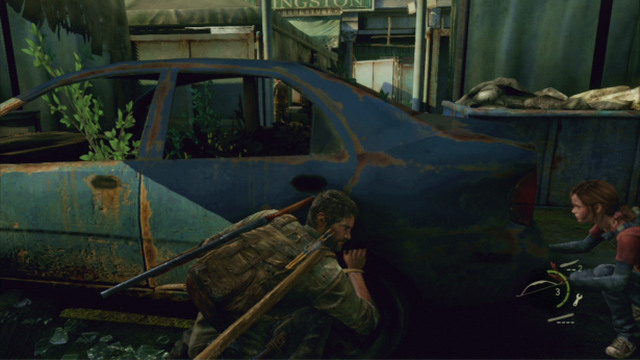 First, go to the left end of this location and take cover behind the blue vehicle. You need to wait for one of the enemies to go behind the bus wreck. You will have the chance, the, to kill him silently. 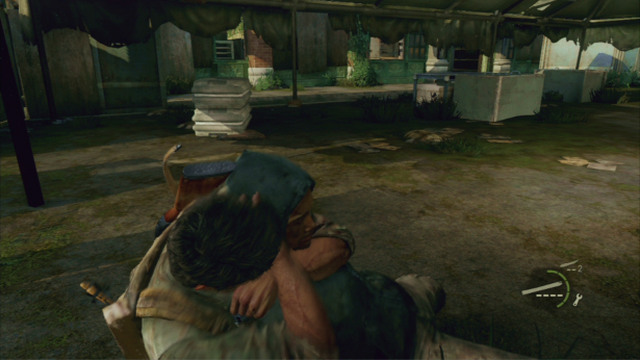 Take cover behind the car again and wait for the next bandit to come; strangle him too. The third one of the enemies, since he is alone now, should be no problem to surprise. 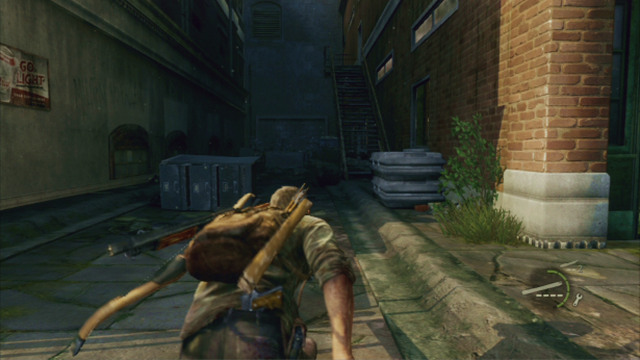 Once the area is clear, sneak slowly to the other end of the location and turn into the alley to the right. 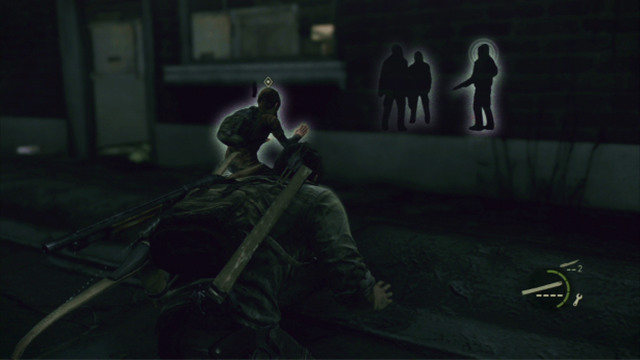 There, you should overhear men talking inside the building. In order not to draw attention to yourself, enter through one of the smashed windows and hide behind the cover to the left. 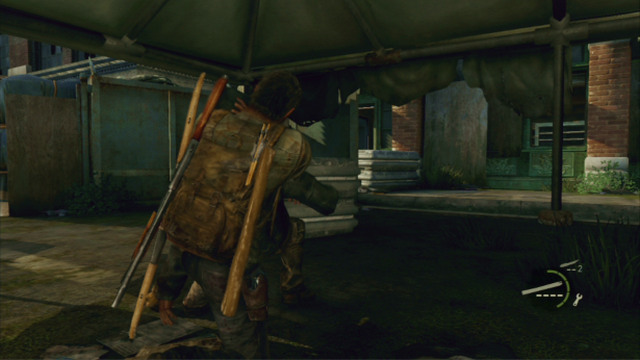 One of the bandits will approach you in a moment. This will create an opportunity to strangle him. The other two will notice his corpse and approach it one by one. This will allow you to repeat the execution. 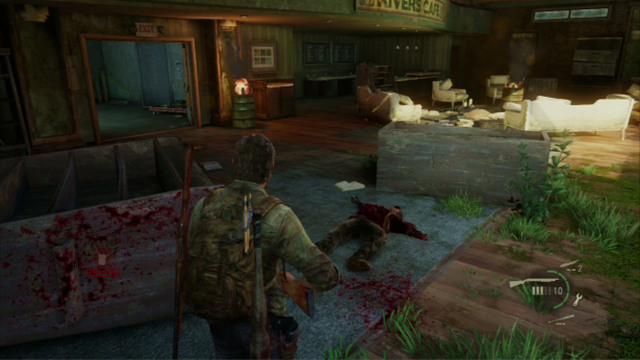 You can eliminate two other groups in a similar way. One on the ground floor and one on the first floor. It is a tedious process though so, nothing will happen if you go for a more open method of fighting. Several shots, bombs or Molotov's cocktails will do the trick. 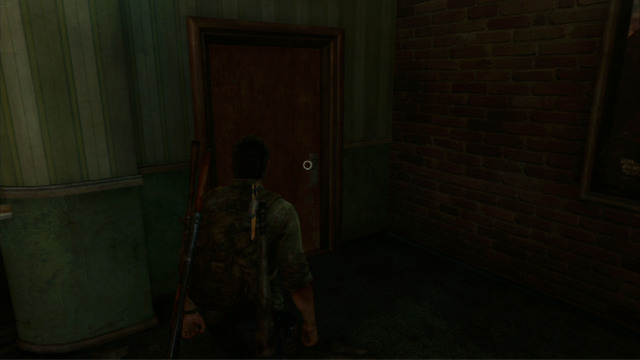 After you clear the building, explore it thoroughly. On the first floor, you will find a door in the corner, whose opening requires a knife. There is a lot of interesting gear behind the door. It is also a good idea to talk to Ellie and listen to her jokes. 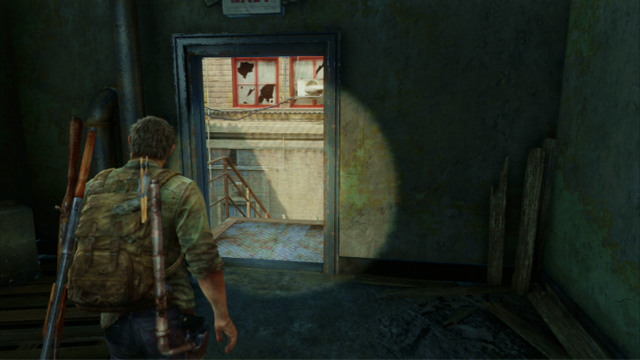 When you are done, walk into the fire escape behind the shop and go ahead. 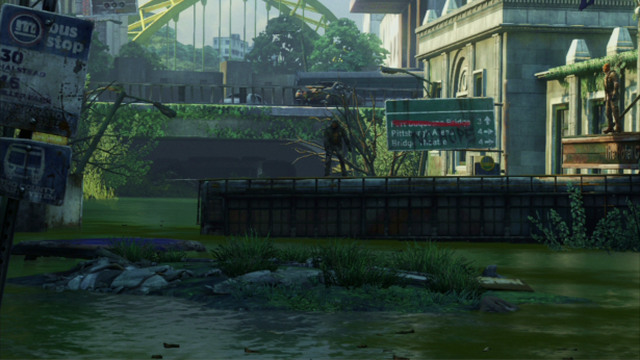 Eventually, you will reach a small, green lake where you will watch a short cutscene. 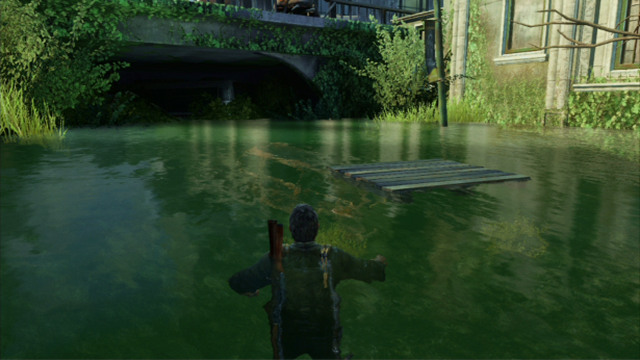 After the cutscene finishes, walk into the water and keep swimming ahead, until you see a drifting plank. 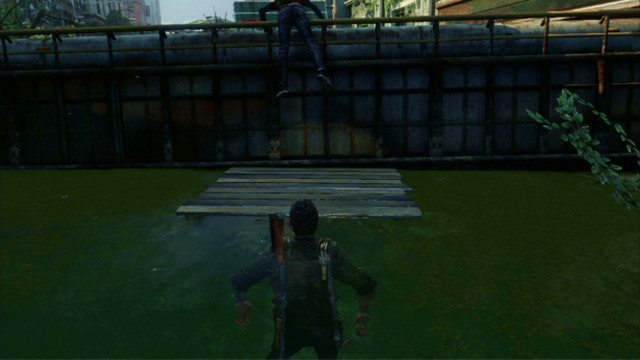 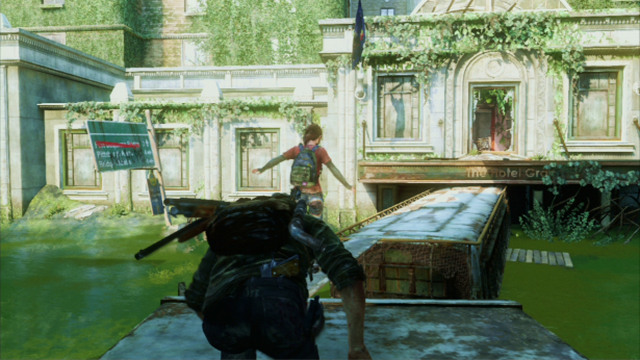 To get up there, swim through the flooded container to the left. You will then end up in a flat that you can go through to meet up with Ellie. 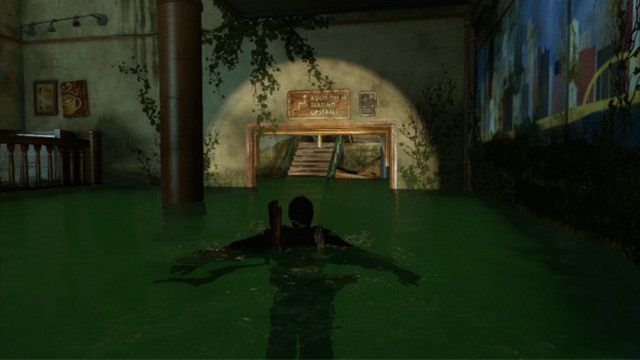 Before you do that, though, search through the first floor of the building. There are several items there. Once you are done, walk over the plank to the other side and enter the hotel building.