This page of The Elder Scrolls V: Skyrim guide includes the most important information on enchanting items. We explain where you can enchant items, what steps this process consists of, and how the end result can be obtained. 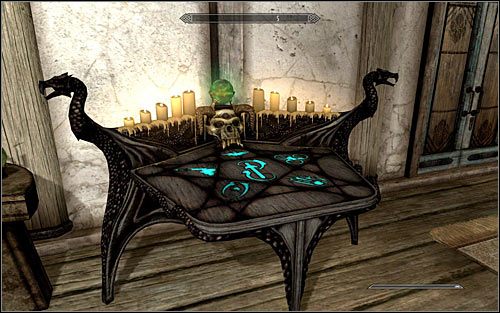 Enchanting is a subject that should prove to be interesting to all character archetypes. The main reason for that is because improving items makes the main character stronger and more resourceful on the battlefield. The main principal of enchanting is imbuing items with magical spells which add entirely new properties. It's not a complicated process, however its concepts are very different from smithing and alchemy. One of the biggest differences is that you aren't allowed to acquire any plans or recipes, because it's up to you to add new spells to the list of possible enchantments. Enchanting also focuses a lot on gathering objects and using them wisely. Arcane enchanters are used to perform all actions and it's important to know that you don't have to own any of them. Nothing is stopping you from visiting one of the enchanters living in Skyrim. They won't mind sharing their place of work with you and they won't even demand any money for granting you complete access. If you don't want to waste too much time searching for arcane enchanters then you should visit Dragonsreach in Whiterun (as seen on the screen above). 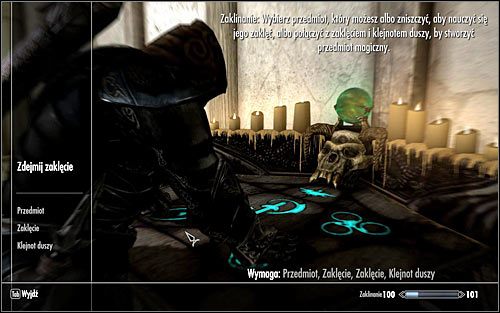 Enchanting is composed of several steps and each step is described below, however in order to things to work you must know at least one enchantment. There's only one way to learn new enchantments and it's done by disenchanting magical items from the main character's inventory. In order to do that you must interact with an arcane enchanter, choose the first option from the list and then the item you want to disenchant. 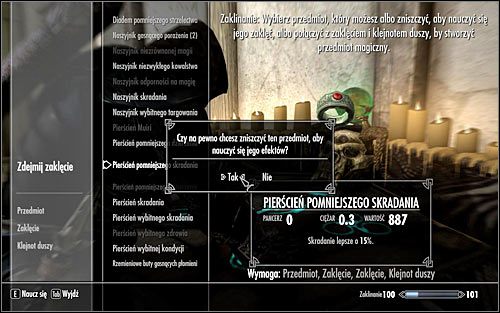 Important! The magical item you've chosen for the disenchanting procedure (in order to learn its effects) is always destroyed and it can't be reversed! As a result it's always important to disenchant only the things you don't need at all and that aren't too valuable in case you'd want to sell them. Besides the main character always learns the "universal" enchantment, so it doesn't matter how good was the magical item before it was disenchanted. For example, if you choose to disenchant a ring of lesser sneak and a much more valuable ring of greater sneak you'll receive the same enchantment in both cases - Fortify sneak. So if you choose the less valuable ring you'll get the same result and you won't have to destroy the better item. You should also know that you don't have to worry about learning the same enchantments again and therefore wasting perfectly good items, because all the objects connected to the enchantments you already know automatically become inactive on the list. 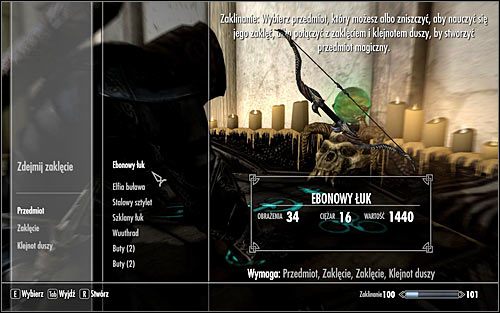 I recommend that you start experimenting with imbuing items after you've learned at least a few spells (different lists for weapons and for armors). It's good to enchant less valuable items at the beginning of the game, because the result of the experiment depends on the main character's skill and on unlocked perks from the Enchanting skill group. Start by selecting the item you want to enchant. A very important thing to know is that you can enchant both the standard items as well as objects that already have some magical properties (in this case they won't be deleted, because new bonuses will be added to the existing ones). 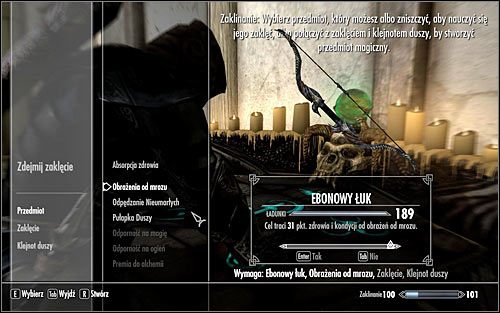 The second step is to choose the enchantment that will affect the item you've chosen in step one. Like I've already said, you should know that are separate armor and weapon enchantments. The game will allow you to apply only one enchantment, HOWEVER if you've unlocked Extra Effect perk from the Enchanting skill tree you will be allowed to choose two enchantments. Obviously you should purchase this perk as soon as it becomes available, because adding two magical effects will result in creating a much better upgraded items. 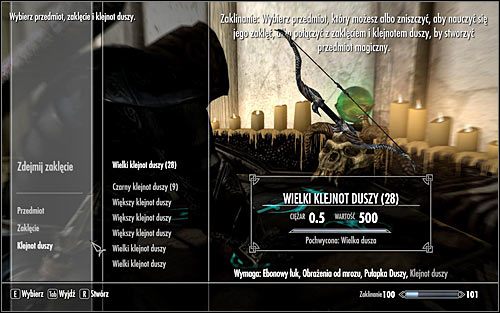 The final third step is to choose a filled soul gem from your inventory that will be used during the enchanting procedure. Soul gems are a common thing in the game and you can find them in locations occupied by monsters, as well as in cities, villages and other places where you'll encounter only friendly beings. You can also purchase the gems from merchants, however it's nothing something I'd recommend, because they're usually very expensive. 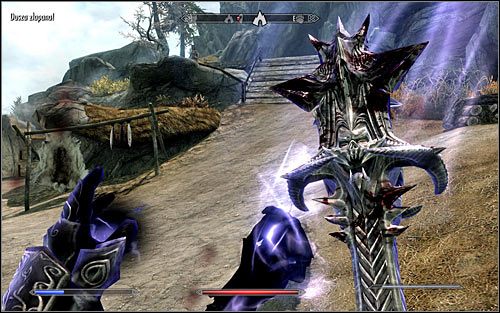 As you've probably noticed the game requires you to use a FILLED soul gem in step three and this means that it must a gem that already has captured a soul. Most of the gems you'll find aren't filled, so it's up to you to change that and therefore to make them viable in the enchanting procedure. There are two ways of filling soul gems. The first method is to use a Soul Trap spell from the Conjuration school of magic. The second method is to equip the main character with a magical weapon that has a similar ability to capture souls. In both cases you must remember that the soul will be trapped only if a targeted being was killed in an alloted time limit (this can range from a few seconds to even a minute). The entrapment itself is always visualized (as screen on the screen above) and you also receive a message in the top left corner of the screen, so you'll know whether you've succeeded or not. 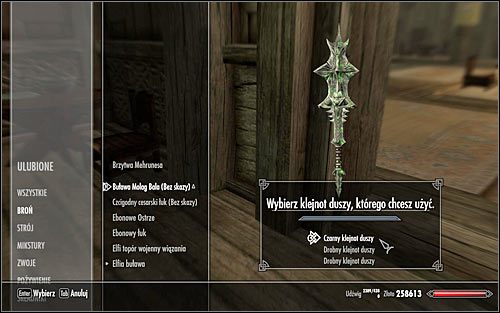 Filled soul gems are used not only when you're enchanting an item, but also during the normal gameplay (this applies only to weapons). You should notice that each attack you perform with a magical weapon consumes a part of the soul that was spent on it and this means you have to remember about recharging it regularly. This activity is done by opening the inventory, choosing the weapon and pressing the T key. The game should present you with a short list of available soul gems and it's up to you to decide whether you want to use a better gem or several smaller gems. I recommend that you always use the smaller gems first, because each gem has its weight and getting rid of them can increase your carry limit.