The Elder Scrolls 5 Skyrim is one of the biggest games in history. It is almost impossible to learn all its elements by yourself, so we created this tutorial. It contains a complete walkthrough describing all the quests present in the game (main, side, Deadric, Guild-related, and those related to the civil war), as well as their branching paths and alternative ways of completing them. A set of several hundred maps included in the guide should make navigating the unfriendly North easier, and descriptions of skills and races will certainly answer your questions. Our lists of skill books, teachers, traders, Shouts, standing stones, companions, spells as well as blacksmith and alchemical schemes (crafting) should also prove useful. If that wasn't enough, the guide also contains a number of useful tips on combat, exploration, committing crime, being a vampire or a werewolf. We have no doubt that this is the largest compendium that can be found on the Internet.

TES 5 Skyrim is one of the largest and most popular RPGs by Bethesda Softworks. We move again to Tamriel, the continent from The Elder Scrolls universe. The eponymous land of Skyrim is located in the northern part of the continent and is largely covered with snow. The character we created is a Dovahkiin, a dragon hunter capable of absorbing the souls of defeated flying beasts and learning abilities called Dragon Shouts.

The freedom of action makes Skyrim stand out from other RPGs. We can create a character representing one of several available races and develop it towards our preferred style of play. The game doesn't force you to focus on the main plot and then doing the side quests. You can also complete many other tasks related to, e.g. the civil war in Skyrim, or those that are part of various guilds found in this country. Free exploration is equally interesting. Hundreds of interesting locations like cities, villages, camps, ruins or dungeons inhabited by a variety of monsters are waiting for you to explore.

More detailed versions of these tips and tricks can be found on the Starting Tips page.

Below we have listed popular questions and problems that may arise while playing Skyrim. All the issues discussed below have been described in more detail on separate pages of our guide.

The main quests are only a small part of the content offered by Skyrim. By doing them you not only learn more about the main storyline, but also visit important places and get unique treasures and Dragon Shouts. Below you will find a list of the main quests in Skyrim. 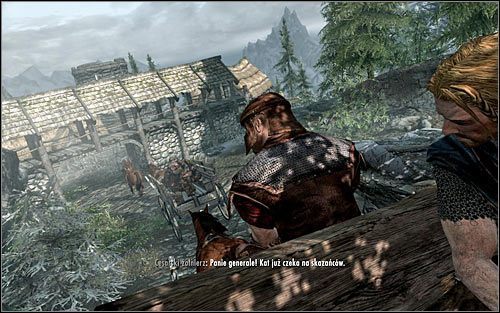 All categories of side quests in Skyrim

Side quests in Skyrim are divided into several different categories. We have listed all the types of side quests below. It is worth noting that this division isn't official - we did that to make it easier to find some side quests in the guide. Don't expect an identical division in the protagonist's journal. 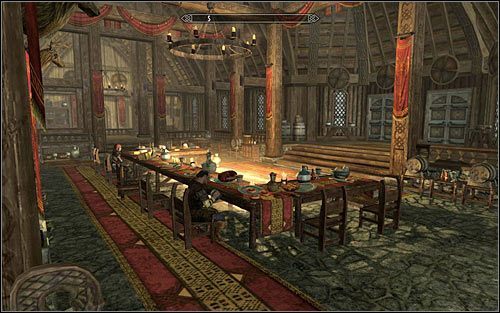 World map and all locations in Skyrim 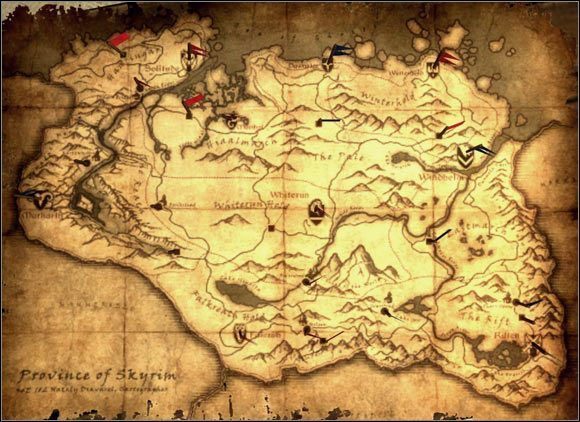 Skyrim is a game with a huge world map - the picture above shows that. Important information is that the locations aren't marked on it right away. You need to visit these places personally to add them to the world map.

You can discover these locations yourself or use our world atlas. All the basic information about locations can be found in the World maps section:

Is Skyrim a long game? 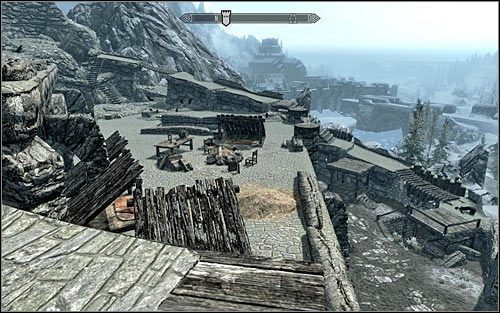 Yes, Skyrim is a very long game with a lot of content. The main storyline itself should provide you with about 30 hours of gameplay (a lot depends on the chosen difficulty level and time spent on exploration of the locations visited during the main plot) and this is just the beginning of your adventure..

You can spend more than 100 hours if you decide to do the side quests - the game offers a huge number of them and many of these quests (especially Daedric quests and story missions related to the Guilds) are quite extensive. They can require you to, e.g. investigate, sneak into large estates or explore vast dungeons full of monsters. You can spend even more time with the game if you want to get trophies/achievements (some of them are quite time consuming) and DLCs - each of the three big expansions for Skyrim offers a few or a dozen hours of content.

A set of information about the length of the game, as well as the approximate amount of time you have to spend with its individual elements can be found on How long does it take to complete Skyrim? page.

Does Skyrim have a difficult platinum trophy? 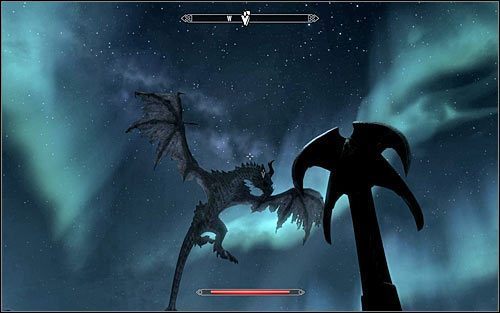 The platinum trophy in Skyrim isn't difficult to get. Don't expect, however, only positive information, as unlocking the platinum trophy can be very time consuming and take you more than 100 hours. The time-consuming factor of Skyrim's is affected by several major factors - you need to complete most of the major quests, collect 100,000 gold coins and reach level 50.

Fortunately, the game can be played at any difficulty level (as well as change it freely). In addition, you need to complete the campaign only once, although you have to be careful in Daedric quests to not lose the chance of getting the artifacts.

A full set of information about all trophies/achievements in Skyrim can be found in the Trophy Guide. 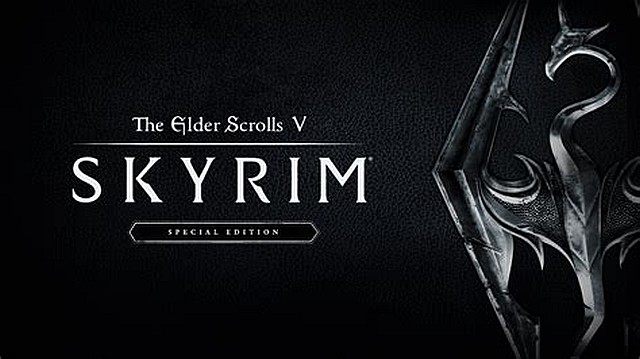 Theoretically not, though a lot depends on how we treat both of these releases:

It is worth noting that Special Edition and VR versions have the same achievements as the main version of the game. These, however, are separate lists of trophies/achievements, which means that you can earn them again by playing a different edition of Skyrim.

Does Skyrim have high system requirements?

The basic version of Skyrim has very low system requirements. They are as follows:

Special Edition has higher system requirements because it offers various graphical improvements (e.g. higher resolution textures). They are as follows:

Are there any cheats for Skyrim?

Yes, there are cheats that make the game easier. They are only available in the PC version. Below you can find information on how to unlock cheats as well as the list of the most important ones:

Press ~ key to open the console window. You can now enter the cheats.

Attention! Using some of the cheats (e.g. unlocking all quests, turn off SI) can lead to unwanted behavior of the game or even a crash. All cheats should be used with caution.

There are many ways to measure popularity. Here, we've compiled a list of best-selling role-playing games, which have sold the most copies throughout their entire lifespan.

The Best Video Games With Cats

Cats play a relatively minor role in video games. Fortunately, there are some titles that give them a fair amount of attention. Let's check out how the industry portrays them.

A return to Skyrim is no surprise. It's a game we'll be returning to even 20 years from now. This time Jerry Bonner returned to TES V with Skyrim: The Anniversary Edition. And it turns out it's as good as ever.

Mods are usually about visual and technical improvements. Story content prepared by fans is a rarity – it requires a huge amount of effort to make everything work as it should. Here are the most famous examples.

Players Are Amazing - The Most Creative Gaming Fan Art

When passionate gaming doesn't quite cut it, and someone has a bit of talent and a lot of creativity, amazing things can happen. There are plenty of examples of some wild imagination that only we, gamers enjoy.