This page of The Elder Scrolls V: Skyrim guide is a complete guide to the system of penalties for offenses in the game. You can figure out what actions are seen as breaking the law, how to avoid being caught red-handed, how to react to the assignment of a reward for the hero's head, and what the problem here is controlling the characters in prison.

All the main types of crimes in the game 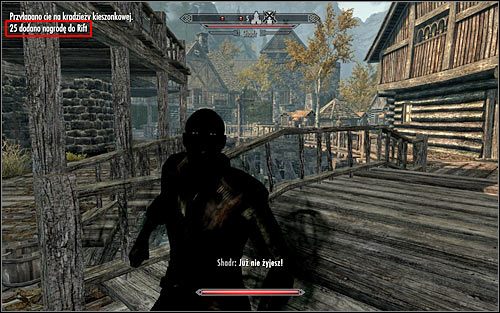 Penalties for the crimes you're comitting aren't so severe as in some of the previous Elder Scrolls games, however it doesn't mean that you shouldn't be thinking about the consequences of your actions. They can prove to be troublesome especially in the early parts of the game, because they may result in losing most of the money or slowing down character development. The most important thing you should know is that you can be punished for a crime only if someone witnessed it. For example, killing another civilian is considered a crime only if someone saw you dealing the final blow and pickpocketing is considered a crime only if you've been caught by the owner of the stolen item or noticed by a passing guard. The game will always inform you about comitting a crime by displaying a message in the top left corner of the screen and you'll also find out about the current bounty on your head.

Here's a list of the most common crimes you may comitt during the game:

Penalties for violation of the local legislation 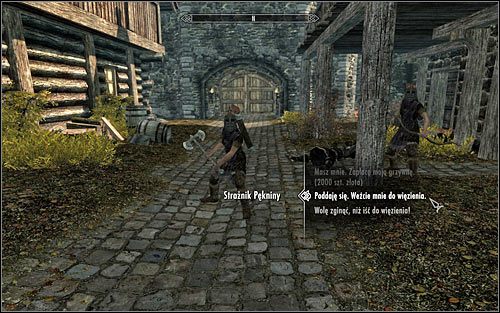 As I've already mentioned each time you've comitted a crime you'll increase the bounty on your head. Higher bounty means more trouble, however even if the bounty is very low you still may find yourself in the center of attention. A typical reaction during your journeys is a possibility of being stopped by a guard (they usually patrol cities and main roads). There are two different ways how the meeting with a guard can look like:

1) If the current bounty on your head isn't too high, then the game should automatically initiate a conversation with the guard (screen above). It's worth mentioning that you can also increase your chances of triggering a conversation by holstering your current weapon. Once the conversation has started you'll be allowed to choose how you want to react. The easiest solution is to pay a fine (and give back the items if you were caught pickpocketing or stealing) and it's determined by the severity of the crimes you've comitted. If you've unlocked conversation perks from the Speech skill tree you may decide to persuade the guard to release you or intimidate him. Additionally if you're a member of the Thieves Guild you may try bribing the guard and if you're a thane in the city where you've comitted a crime you may try sending the guard away (it works only once per city for an entire game). The third possibility is to agree to go to jail to serve your sentence and you can find out more about this is you continue reading this section of the guide. The last option is to dismiss any attempts of a peaceful solution and to attack the guard. I STRONGLY recommend that you don't do this, because you will be attacked by all guards from the surrounding area and it's always very difficult to kill them.

2) If the current bounty on your head is very high, then you won't be allowed to negotiate the terms of your release with the guards, because they'll attack you on sight even if you decide to holster your weapon. In this case the only solution is to avoid human settlements for the time being. Wait a couple of days and you should be able to meet a bounty hunter. This person will demand to hand over a large sum of money and doing that will result in receiving a clean slate so that you will be allowed to start visiting cities again without the risk of having to kill the local guards. 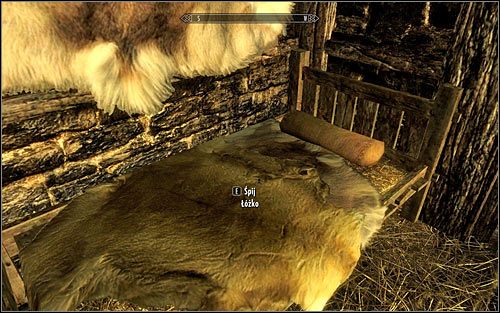 Landing in prison to serve a sentence is one of the ways how you can repay for the crimes you've comitted. I recommend choosing this method only if you don't have enough money to pay a fine, because staying in a prison means having to deal with some unwanted complications. If you want to do the right thing and spend a couple of days behind bars, then after you've been transported to a cell you must interact with a bunk bed (screen above) or a pickaxe (only in the Markarth prison). Doing this will automatically fast forward the game to the moment when your sentence has come to an end, but sadly this also means that a randomly chosen skill will have its progress bar reset. For example, if your progress bar for the One-handed skill was at 50% for advancing from 45 to 46 points and if the game has chosen it then you will have to start developing it from scratch (starting with 45 points and no progress made towards advancing to 46 points). 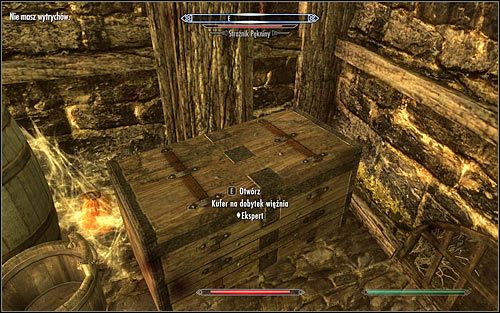 An alternative solution once you've landed in a prison is to attempt to escape, however it's very difficult to accomplish. You would have to start off by lockpicking a cell door, then you would have to locate a chest containing all of the items belonging to the main character (screen above) and finally you would have to find an escape tunnel or sneak past the guards. All of these actions would have to be performed while avoiding detection, because being caught by the guards would only mean having to serve even a bigger sentence. It's worth mentioning that you can escape from all prisons except for the Markarth mine, so you'll have to be very careful not to comitt any serious crimes when you're close to that city (western part of Skyrim).