On this page of the TES V: Skyrim guide, you will find various tips on how to explore the game world. We inform you, first of all, about how to travel faster around the in-game world and how to use quick travel, as well as warn you about possible problems that arise during the exploration(for example, encountering and fighting dragons).

How to travel faster? 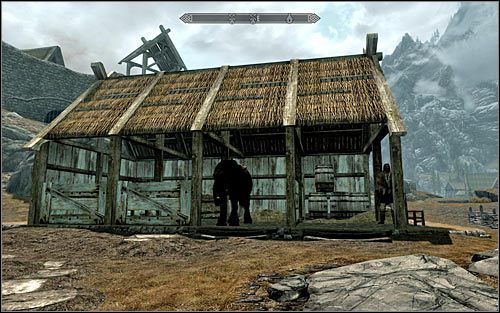 There are four different ways how you can travel the world in Skyrim. You can always decide going on foot, however I would recommend doing this only at the beginning of the game when you don't have a lot of money to spend on other means of travel. Once you've visited Whiterun for the first time and familiarized yourself with the basics of the game you should start thinking about getting a horse. The biggest advantage of having a horse is that you can travel between locations much faster than when you're moving on foot. Furthermore, horses can be used to assist you in climbing mountains and in many of these places an attempt to go higher on foot would most likely end with a disappointing failure. Sadly travelling using a horse also has some disadvantages. The most important one is that you can't attack anyone while you're on a horse, so before you can join the battle you must dismount the animal. Remember that you and your horse are vulnerable targets when you're doing that, so it's always wise to move away from enemy units before leaving your horse. Another disadvantage is that your follower(s) can't use horses, so each time you've reached your destination you'll have to wait for them to show up or enter a different area (a cave for example) so that they'll "magically" rejoin with you.

As for the horses themselves, you may decide to buy one, steal one or receive one as a reward. If you're thinking about purchasing a horse, then you should visit Whiterun Stables (sector 5, number 32), Markarth Stables (sector 6, number 9), Riften Stables (sector 9, number 12), Windhelm Stables (sector 4, number 4) or Katla's Farm (sector 1, number 33). Once you've arrived at the stables speak to the owner and agree to pay 1000 gold (all horses cost the same amount of money). Stealing a horse is much easier, however if you're caught it will be considered as a crime (more on this in the Comitting Crimes section of this chapter). You can receive a horse for free and this occurs on two different occasions. The first "free" horse is named Frost and it can be obtained while completing Promises to Keep side quest and the second horse is named Shadowmere and it can be obtained while completing The Cure for Madness Dark Brotherhood quest. Shadowmere is by far a better horse and it's also different from all other horses. This animal is more resistant, moves faster AND it also can participate in battles (only in fights that take place above ground). It's worth mentioning that your horse can be killed. You should be very careful, especially if you're using Shadowmere, because you can't revive this horse or replace it with the exact same one. 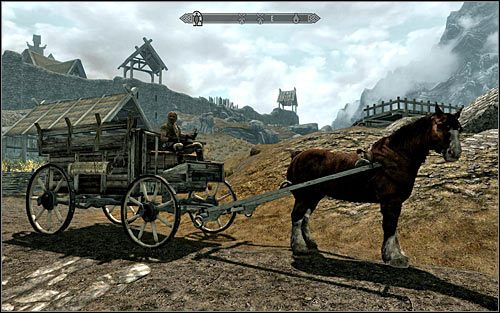 A good way to unlock access to all the major areas of Skyrim is to hire a carriage to take you there. Carriages can be found next to every stable, so you can search for them in Whiterun Stables (sector 5, number 32), Markarth Stables (sector 6, number 9), Riften Stables (sector 9, number 12), Windhelm Stables (sector 4, number 4) and Katla's Farm (sector 1, number 33). The carriage driver takes passengers to the biggest cities of the game's world and you should now that a single journey never costs more than 50 gold coins. This is a very cheap service, so you should definitely consider it. I recommend using the carriage to unlock the northern part of Skyrim (Solitude, Dawnstar, Morthal, Winterhold), because travelling through the mountains on your own may prove to be very dangerous to an unexperienced hero. 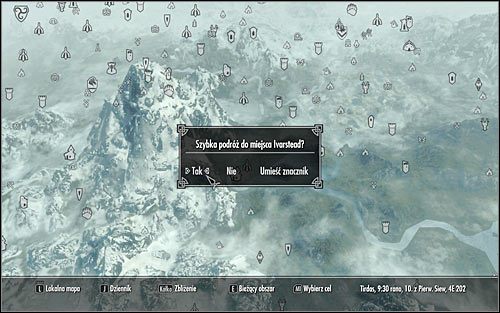 As the game progresses you'll be unlocking tons of new locations (also those you only pass by) and you should remember that the game allows to quickly return to them based on the fast travel feature. If you want to use this method, then you must begin by opening the world map. Find the place where you want to go, click on it and confirm that you want to skip the normal journey. An important thing to know about fast travel is that you can't use it if you're inside a building or a dungeon. It also stays blocked if the area around you is occupied by enemy units, so you can't rely on fast travel for example to escape from the battlefield. You must either get rid of all enemies or outrun them to unlock fast travel once again.

How to react when encountering dragons? 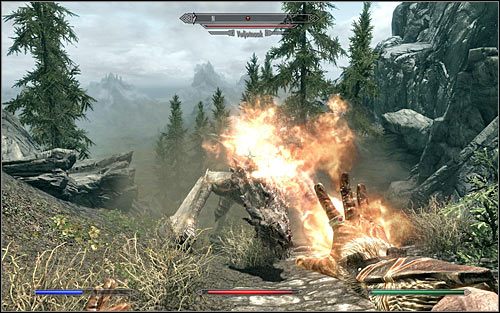 It's very important to save your progress as often as possible, because Skyrim is inhabited by many different types of monsters and some of them, especially in the early parts of the game, may prove to be a challenge to you and your team. I would recommend that you stay away from trolls, bears, sabretooth cats and giants until your character has gained some levels and acquired good gear. Once you've completed Dragon Rising main quest an additional challenge will be added to the game, because from that point on you'll also be regularly bothered by dragons. If you've noticed that a dragon has appeared in the vicinity you may engage it in battle or try fleeing and moving to a different location (preferably using a horse). Sadly it doesn't solve all of your problems, because for example if a dragon has appeared above the city it will begin fighting the civilians. This means you won't be allowed to interact with anyone until it's dead and it may even kill some of the important NPC's. Thankfully eliminating dragons isn't too difficult, especially since you can count on assistance of other people in most of the battles. 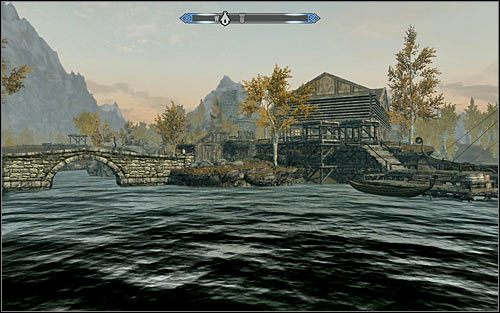 Most area in Skyrim are fully accessible and this means you can explore them at any point of the game and without having to fulfill any special requirements. Some of the rooms and areas may of course require a key to open or a special permission to enter, but even these problems can be overcomed. I wouldn't recommend visiting dwarven ruins and bigger crypts in the early parts of the game, because they're usually a home to very powerful groups of creatures and an unexperienced hero may die easily there.

There are also locations which are unavailable at the beginning of the game. One of the examples is the Goldenglow Estate shown on the screen above. Areas like this one are usually being opened after you've advanced to a certain quest and you'll have to remember that some of them will remain that way only for a duration of the quest. Make sure to read the first chapter of this guide, because it contains detailed descriptions of all locations, including hints on how to gain access to the locked ones.