This TES V: Skyrim World Atlas page describes Rexemplary character builds. Our ready-made character builds will allow you to easily start the game as a warrior, thief, mage or a hero connecting different play styles. For each archetype, we offer different builds, for example, depending on the preferred play style.

IMPORTANT! All the archetypes mentioned in the next below should be treated only as SUGGESTIONS and not as the only possible styles of play. Skyrim gives you an incredible freedom when it comes to developing hero characters and you also don't have to worry about any complex restrictions or requirements. If you're persistent you can for example turn a high elf into a full blooded warrior or transform a not too bright orc into a powerful and wise mage. This doesn't mean of course that pursuing and perfecting the best combinations of races, abilities and styles of play is not recommended, because this is an excellent way to make the gameplay easier and to exploit all the free bonuses provided by the game.

I strongly recommend that before you start reading about suggested character archetypes you first study all the information provided by this guide on the differences between members of different races and about the significance of all skills and their perks. The archetypes descriptions are focused on things which will help in you winning battles and staying alive. You won't find any hints about crafting items or using speech, because it's entirely up to you to decide whether you want to take interest in these actions and to what extent. Make sure to read other chapters of this guide to find everything about all possible crafting activities. 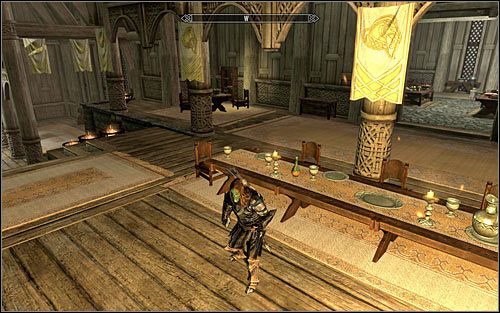 No one is stopping you from creating a character that combines elements of a warrior, a mage and a thief. OR you can focus only on one thing and try to reach perfection... it's up to you how you want to play the game and what gives you the most fun.

Option 1 - I want to play as a warrior

My favorite choice for a warrior is a character that uses a one-headed weapon paired with a shield. It would be wise to choose a nord or a redguard, however if you don't care about high mobility so much then you may also decided on an orc. As for the skills and perks you should be interested in, make sure to choose One-Handed and Block as your primary areas of concern. You should also decide on a type of armors you want to wear (a mobile warrior in a light armor or a slow warrior in a heavy armor) and spend at least a couple of skill points on that.

If you want a warrior that uses two one-handed weapons, then he or she should be a redguard. In this case developing One-handed skill alone should be your priority and it's good to remember about the perks which improve fighting with two weapons. Just as with the archetype described above, you'll have to choose whether you want to be an agile character in a light armor or maybe a slightly slower warrior in a heavy armor.

The last of the choices mentioned earlier is a warrior that uses a single two-handed weapon. In this case an orc will be your best pick when it comes to choosing the character's race, however if you want someone who looks more human you may also choose a nord. The best thing about orcs is that they can use their "fury mode" and also they start the game with a big bonus to Heavy Armor skill tree. This is your best choice of an armor, because you'll need to compensate for lower armor rating caused by not using any shields. Also, two-handed attacks are supposed to be slow and powerful, so you'd just be doing something else than you should while wearing light armor.

Aside from choosing weapons you'll also have to plan your strategy when it comes to developing attributes. I recommend focusing on increasing health and stamina (you'll need it for weapon power attacks).

Option 2- I want to play as a thief

If you want to play as a thief, then the most important choice you'll have to make is how you want to be killing your enemies. You may wish to eliminate them from a safe distance using a bow or in close combat encounters with a dagger or something similar.

My favorite choice for a thief/assassin is a character that eliminates its targets in close combat. It would be wise to choose a member of a khajiit race for this role, mostly because khajiits have a starting bonus to Sneak. Another reason why you should be interested in this race is that khajiits receive a passive bonus which allows them to inflict more injuries in melee combat. As for the skills and perks you should be interested in, make sure to choose Sneak and One-handed categories. It's very important to use light armor so you won't lose any mobility and won't make too much noise. It's also good to acquire pieces of armor which make it easier to remain hidden (for example, assassin armors provided by the Dark Brotherhood).

If you want to create a thief/assassin which specializes in eliminating the targets from a large distance, then you should consider choosing a wood elf. The best thing about this choice is that wood elves start with a big bonus to Archery, so you'll be able to inflict more injuries from ranged attacks from the very beginning of the game. As for choosing the skills and perks, focus primarily on Archery, but you should also remember about Sneak, especially if you want to take your opponents by surprise. Similar to the archetype described above, you should definitely choose a light armor. It's also good to have a backup plan in case someone avoids your bow attacks and manages to get dangerously close to the main character. I would recommend having a small one-handed weapon ready to be used, however you may also decide to rely on simple offensive spells.

Aside from choosing weapons you'll also have to plan your strategy when it comes to developing attributes. I recommend focusing on health, because it'll decrease chances of a sudden death.

If you want to play as a mage, then the most important choice you'll have to make is what type of character you want to be. You may decide to create a mage which uses only offensive spells, seek balance or develop a character who plays very defensively.

My favorite choice for a mage is a character that tries to finds balance and by that I mean having both offensive and defensive spells from all available schools of magic. It would be wise to pick a high elf for this job. The main reason for that is because high elves receive very valuable bonuses to all skills associated with using magic, so you'll have a much easier start and you won't have to spend a lot of time trying to improve each skill category. As for the skills, I would recommend focusing on all magic schools, however if you want to rely only on selected schools then you should choose Destruction school (offensive spells) and Restoration school (defensive spells).

If you want to create a mage that specializes in a very offensive style of play, then your best choice when it comes to main character's race is going to be a dark elf. Members of this race have a big bonus to Destruction school of magic and this is the category you should be interested in the most. Keep casting spells from this school, developing it and therefore increasing the damage inflicted by the spells.

If you want to create a mage that specializes in a very defensive style of play, then your best choice when it comes to main character's race is going to be a breton. Members of this race have a big bonus to Conjuration and this school of magic is definitely the best choice here, because it allows to summon magical beings or the undead. These creatures can only assist you in winning fights or even completely replace you, allowing you to cast defensive spells. I wouldn't recommend focusing only on the Conjuration school, because other schools (except for Destruction) are also going to be good choices.

Aside from choosing schools of magic you'll also have to plan your strategy when it comes to developing attributes. I recommend focusing on mana, because you're going to need tons of it. Don't forget about health, increasing it from time to time. You'll also have to choose if you want to be wearing a light armor or go with the plan of having a full mage and use only robes.

Option 4 - I want to mix different styles of play

As I've already mentioned you're more than welcome to experiment with mixing different character "classes" to create a character that is skilled at doing many different things.

The first of my recommendations is to create a character that combines styles of a warrior and a mage. An ideal choice when it comes to main character's race in this situation is an imperial, because you can count on perfect start bonuses. The warrior part of your character should rely on one-handed weapons, so you won't have to reserve both hands at the same time. You'll also have to decide at the beginning of the game if you want to be wearing a light armor or a heavy armor. As for the mage part of the character, it would be a good idea to focus on two entirely different schools of magic - Destruction (offensive actions) and Restoration (defensive actions).

The second of my recommendation is to create a character that combines styles of a thief and a mage. An ideal choice when it comes to main character's race in this situation is an argonian, because you can count on perfect start bonuses. The thief part should have a bigger significance and as for the skills you should choose from Archery, Sneak, Light Armor and One-handed. The mage part should play a less important role so that it'll support your character when his thief skills aren't needed. Make sure not to choose too many schools of magic. A maximum of two will be more than enough.