This TES V: Skyrim World Atlas page describes Restoration skills. These skills are related to the magician archetype (these are different areas of magic). Our tutorial in addition to describing the skills will tell you how to develop them, and what related best features are worth unlocking. 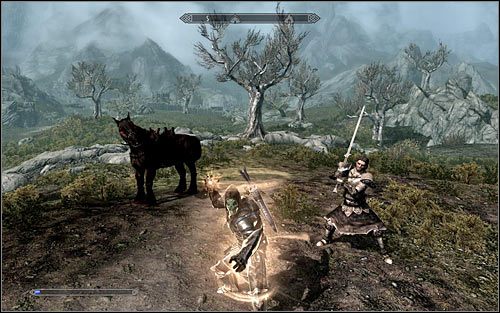 Description: Ability of casting novice restoration spells for half the mana cost.

Comments: It's very important that you unlock this perk at the very beginning of the game, because you'll start your journey with the first restoration spell and therefore you'll be allowed to proceed with developing this skill group skill right away.

Comments: This perk isn't useful to a 100% mage, because such a character only cares about health and mana. If your character is part mage and part warrior you should definitely consider unlocking it, because warriors require a lot of stamina (mostly for weapon power attacks).

Comments: This is one of the important perks from this entire category and it's absolutely crucial that you unlock it in the early part of the game, especially since it doesn't have high requirements.

Description: Increased effectiveness of all spells when cast on the undead.

Comments: This perk is far more valuable and useful then you might think. The best thing about it is that it doesn't work only with restoration spells, because its effects can be combined with all schools of magic. This means you can use it not only to draw away the undead more efficiently, but also to kill them much easier. Consider unlocking this one as soon as it becomes available.

Description: Ability to absorb mana from an enemy spell if a ward was used to block it.

Comments: You should know that you can absorb about 25% of the mana that was originally used by an enemy mage to cast the spell. That's a lot and it can definitely help you in maintaining your mana on decent levels (and of course to sustain magic wards to absorb more of it).

Description: Ability of casting apprentice restoration spells for half the mana cost.

Comments: I recommend buying this perk early in the game so that you'll have a good reason to switch from novice to apprentice spells.

Description: Ability of casting adept restoration spells for half the mana cost.

Comments: The adept level of the restoration school of magic is represented by a bunch of very good spells, so you shouldn't wait too long before unlocking this perk.

Description: Ability of casting expert restoration spells for half the mana cost.

Comments: I strongly recommend that you unlock this perk as soon as you've developed the Restoration skill to 75 points, because there are some really helpful spells in this group, including the one used to heal all of the main character's allies at the same time.

Description: Ability of casting master restoration spells for half the mana cost.

Comments: The master level of the restoration school of magic adds mostly the spells used to repel the undead, so there's no rush and you should consider this perk only if you've already bought more useful ones.

This perk has two ranks and unlocking the second rank makes it better.

Description (rank 2): Mana regeneration rate improved by a total of 50%.

Comments: Both perks are among the useful ones offered by this skill group. Make sure to unlock them the first chance you get, because having a fast mana regeneration rate is crucial even if your character isn't a full mage.

Description: Ability to automatically regain 250 health points if the main character's health falls below 10% (can happen only once a day).

Comments: This is an extremely helpful perk, especially if you don't constantly monitor the health bar of the main character or if you don't want to risk sudden death when going against much stronger opponents. The additional advantages of this perks are that it's fully automated and that it doesn't need any mana or potions to work.

Comments: Unlocking this perk is not recommended. The main reason is that restoration school is based mostly on defensive spells so if you occupy both hands you won't be able to defend yourself. The only exception is if you're leading a strong team (normal follower and magical companions) which is capable of distracting enemy units from the main character.