This TES V: Skyrim World Atlas page describes Speech skills. These skills are associated with the thief and persuasion master archetypes. Our tutorial in addition to describing the skills will tell you how to develop them, and what related best features are worth unlocking. 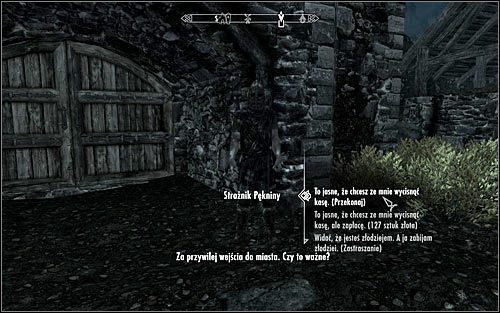 How to increase skill: This skill can be increased by successfully convincing other people to change their minds, by successfully threatening them and by selling items to local vendors. The growth of the skill depends on the "difficulty level" of the conversations and on the value of the items being sold to merchants.

Main purpose of developing this skill: Better chances to convince other people to the main character's point of view and receiving better prices (buying and selling) when visiting vendors.

Comments: Make sure to unlock the first perk from this group at the beginning of the game, so you'll have a much easier job getting richer and acquiring supplies needed for the upcoming journeys. Unlocking four remaining perks isn't a priority, however a 30% discount can make a difference when you're buying or selling extremely precious artifacts.

Description: Negotiated prices are 10% better (buying and selling goods) if the merchant is a person of the opposite sex.

Comments: This perk is very useful if you're playing as a woman, because the majority of merchants in Skyrim are men. It doesn't mean that it won't be useful to a male character, but you'll probably won't use the bonus too often.

Description: Ability to sell any kind of good to any merchant.

Comments: This perk is extremely helpful, because it prevents you from wasting precious time trying to find the merchants that deal only with certain types of goods. Make sure to combine this perk with the other ones from this skill category to make the vendors richer and as a result to achieve a better combined effect.

Description: Possibility of investing 500 gold coins into a single merchant, resulting in that person having more gold for the rest of the game.

Comments: This perk has its pros and cons. The biggest advantage is that you'll be allowed to sell more items to a single merchant without having to visit several of them. The biggest disadvantage is that you will have to manually invest into each merchant and to pay 500 gold coins from your own pocket. As a result this an interesting proposition only if you have your favorite merchants and if you want to improve the quality of trading with them. Otherwise Master Trader is a much better perk for you.

Description: Possibility of selling stolen goods to all the merchants the main character has invested in.

Comments: This perk is created for a thief. If you're playing as such a character you'll be allowed to sell stolen goods to all members of the Thieves Guild, so this perk isn't great and you'll need it only if you're selling really valuable things and trading with the guild members isn't enough.

Comments: This is a MUCH better perk than Investor, because you won't have to visit any of the merchants and share some of your own gold with them. Make sure to unlock this perk as soon as you've fully developed Speech skill.

Description: Possibility of bribing guards so that they ignore crimes comitted by the main character.

Comments: This is a rather useless perk. You should avoid any contact with the law enforcement even if you're playing as a thief or an assassin. The worst thing about this perk is that a bribe is used only to get rid of a guard that has noticed the main character. It doesn't erase the list of comitted crimes, so you may as well be bothered by other guards and you'd have to pay them as well.

Description: 30% easier to persuade someone.

Comments: This is also a useless perk, especially since even a failed persuasion attempt doesn't mean the end and you can always bribe the other person with gold.

Description: Twice as easy to intimidate someone.

Comments: This perk is very similar to the previous ones, so you should avoid it. Even if you fail at trying to intimidate someone you'll most likely have a chance to use persuasion or bribery. Spend the skill point(s) on something better.