This TES V: Skyrim World Atlas page describes Theft skills. These skills are associated with the thief and persuasion master archetypes. Our tutorial in addition to describing the skills will tell you how to develop them, and what related best features are worth unlocking. 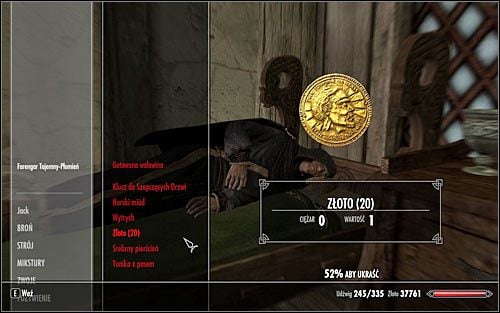 How to increase skill: This skill can be increased by successfully stealing items from other people. The growth of the skill depends on how worthy are the stolen items.

Main purpose of developing this skill: Lowering the risk of getting caught while stealing.

Comments: You should remember about unlocking each perk from this group as soon as it's possible, because they'll guarantee that it'll be less likely to get caught. Don't think that unlocking all five of them will result in nothing but successes, because the chances of stealing are always being lowered by the weight and value of the items you're interested in. Weapons, pieces of armors and other large objects are among these things.

Description: 25% more likely to succeed at stealing if the target is asleep.

Comments: This perk not only unlocks access to other perks, but is also useful on its own. It's always recommended to try to steal from people after they decide to go to sleep, however you should know that certain individuals never leave their posts.

Description: Ability to place poisons in other people's pockets in order to weaken them.

Comments: This perk will only be useful to assassins and only to those who wish to kill their targets without raising any suspicion. In my opinion it's much better to focus character development on performing surprise attacks, especially since these techniques don't require any additional materials to succeed.

Comments: You may surprised to hear that this perk doesn't anything in common with pickpocketing. It's very useful for all types of characters and especially to warriors in heavy armors. The only disadvantage is that even if you don't want to be an advanced thief you'll still have to work on your skills and spend at least three skill points to unlock it.

Comments: This isn't a perk you should be interested in, because you won't encounter any gold problems during the game and besides most of the civilians you encounter don't have a lot of gold on them.

Description: Ability of stealing keys without the risk of getting caught.

Comments: You should consider purchasing this perk only if you don't plan on developing Lockpicking skill at all. Otherwise it's just a waste of a skill point, because it's much better to use lockpicks instead of keys (to improve character's skills).

Description: Possibility of stealing equipped weapons from other people.

Comments: This is a very interesting perk which can be used to obtain some very powerful weapons without having to pay for them or without having to kill the people they belong to. Make sure to check the perk described below for a perfect 'combo'.

Description: Possibility of stealing items equipped by other people.

Comments: Misdirection perk allowed you only to steal equipped weapons and this one allows to steal all kinds of things. Your primary area of interest are of course armor parts and magical rings and amulets. Just as before, you will have a chance to take possession of very valuable items without having to kill anyone to get them. It's definitely something you should be interested in.