This TES V: Skyrim World Atlas page describes Lockpicking skills. These skills are related to the thief archetype. Our tutorial in addition to describing the skills will tell you how to develop them, and what related best features are worth unlocking. 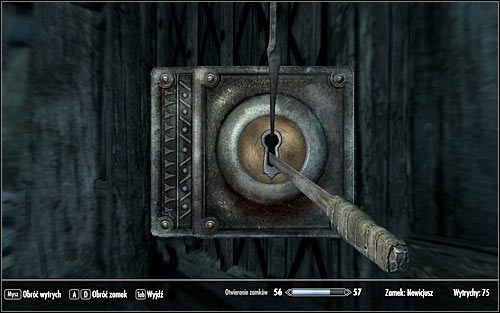 How to increase skill: This skill can be increased by attempting to open different types of locks. The growth of the skill depends on if you've succeeded at opening a lock and how complicated it was to unlock it.

Main purpose of developing this skill: Increasing the effectiveness of lockpicking (less likely to fail).

Comments: You must purchase this perk to gain access to all the remaining ones from this skill tree.

Comments: The reason for unlocking this perk is the same as above, however in this case you'll have a choice how you want to continue unlocking the skill tree.

Description: Ability of opening locks without the risk of getting caught.

Comments: This is an extremely useful ability, as long as you often find yourself picking locks in public places (cities, homes etc). By unlocking this perk you don't have to worry about hiding the main character in the shadows before attempting to open the lock. The same goes with not having to worry about avoiding the guard patrols.

Description: Possibility of receiving a copy of the key from an opened lock so that it can be used (if necessary) in the future.

Comments: This is practically a useless perk, because only a very small number of locations and chests become locked again later in the game. Furthermore, it's always possible to open them again (or to steal an original key from the correct person).

Comments: You'll want to purchase this perk not only to lower the difficulty when lockpicking, but also to gain access to new interesting perks.

Comments: The only reason why you should unlock this perk is to gain access to the one explained below, because you won't have any gold problems during the game.

Description: 50% chance of finding a special treasure in a chest.

Comments: This is a very interesting perk, especially since the chances are high and almost every time the main character finds something very valuable which he may use in his upcoming adventures or sell with a high profit.

Comments: This is a valuable perk, because you'll be dealing with expert locks very often and because it unlocks access to three final perks of this skill tree.

Description: Ability of starting the lockpicking process much closer to the mini-game's solution.

Comments: Obviously this perk is all about lowering the difficulty of the mini-game even more, but the main reason for unlocking it is to gain access to the next perk (the one explained below).

Comments: This is an excellent perk if you don't have the Skeleton Key mentioned earlier in the text or if you've already returned it and therefore can't get it back. Having indestructible lockpicks makes the entire process of opening locks much easier, because you won't have to worry about running of them or restarting the mini-game after a failed attempt.

Comments: Master locks are always extremely difficult to open and they take many attempts, however if you've already unlocked the Unbreakable perk you won't have to invest in this one as well.