This TES V: Skyrim World Atlas page describes Sneak skills. These skills are related to the thief archetype. Our tutorial in addition to describing the skills will tell you how to develop them, and what related best features are worth unlocking. 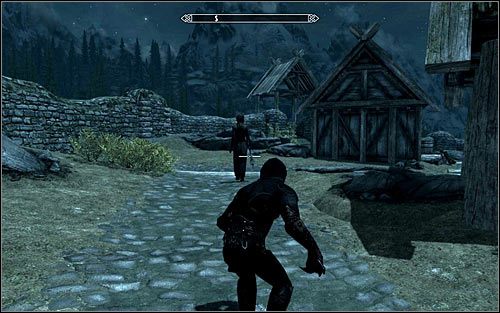 How to increase skill: This skill can be increased by performing successful surprise attacks and by staying hidden while close to characters that may detect you. In both of these cases it doesn't matter if the character you're hiding from is friendly or hostile.

Main purpose of developing this skill: Increasing the chances of staying undetected.

Description (rank 1): 20% less likely of being detected when sneaking.

Description (rank 2): 25% less likely of being detected (in total) when sneaking.

Description (rank 3): 30% less likely of being detected (in total) when sneaking.

Description (rank 4): 35% less likely of being detected (in total) when sneaking.

Description (rank 5): 40% less likely of being detected (in total) when sneaking.

Comments: It's good to unlock all the perks from this group as soon as possible (or at least the first one). Staying hidden is the key of success and it doesn't matter whether you want to use that to avoid someone, to kill some person or to steal something.

Comments: Purchasing this perk may be a good idea if you often like to sneak up on other people to perform surprise attacks on them. You should know that you can achieve the same (or even better) effects if you decide to use spells.

Description: Pressure plates are never triggered if the main character steps on them.

Comments: This is a rather useless perk and the only reason why you should unlock it is to gain access to other perks from this side of the constellation. Pressure plates are always easy to spot and avoid.

Description: Ability of doing a silent roll if the main character has started running while sneaking.

Comments: This ability may assist in some way in the main character staying hidden, however it's much easier to rely on good armor designed for a thief or on spells which increase the chances of staying undetected.

Description: Ability to walk and run without increasing chances of detection.

Comments: This is a much better perk than the one explained above, however you can still achieve a similar effect with spells and potions and they don't require spending any skill points to ensure they'll work.

Description: Ability of stopping a fight by crouching, forcing nearby opponents to start looking again for the main character.

Comments: The main purpose of this perk is to guarantee yourself a free chance to run away if the main character gets spotted by enemy units or if he sustains heavy injuries during a fight. In my opinion unlocking this perk isn't absolutely crucial and worth spending several skill points on less useful previous perks from this side of the constellation, but the final decision is up to you.

Comments: This is an excellent perk if you plan on your character being a skilled assassin specializing in eliminating its victims in close combat. The game doesn't force you to attack your target from the back, however the approach from the front is only possible if you've become invisible. Make sure to check Assassin's Blade perk as well, because it's an improved version of this one.

Comments: This is an excellent perk if you plan on your character being a skilled assassin specializing in eliminating its victims using ranged attacks. Remember that you must remain hidden until the arrow reached its target, because otherwise you won't receive the bonus to a surprise attack.

Comments: This perk is an improved version of Backstab. It's not spectacular, because it works only with daggers, however you can overcome this problem by equipping yourself with one of the best daggers available in the game (Blade of Woe from the Dark Brotherhood quest is a great pick). Having a good dagger is important, because you'll want to inflict so much damage that your target will die as a result of a single blow.