This TES V: Skyrim World Atlas page describes Block. These skills are largely related to the warrior archetype. Our tutorial in addition to describing the skills will tell you how to develop them, and what related best features are worth unlocking. 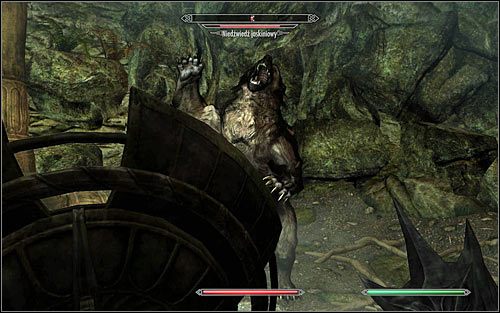 How to increase skill: This skill can be increased by blocking enemy attacks and hitting them with your shield. The growth of the skill depends on how much damage the hero has received or taken.

Main purpose of developing this skill: Receiving less damage and lowering the chances of being staggered after a successful block.

Description (rank 2); Blocking is more effective by a total of 25%.

Description (rank 3); Blocking is more effective by a total of 30%.

Description (rank 4); Blocking is more effective by a total of 35%.

Description (rank 5); Blocking is more effective by a total of 40%.

Comments: It's a good idea to regularly unlock new perks from this group, especially if your character is constantly travelling with a shield.

Comments: This is one of the most useful perks from this category, because enemies like to use power attacks very often. Having this perk allows you to respond to these actions much easier, whether it's a normal block or an attempt to make a counterattack.

Description: No damage received if an enemy arrow hits the shield.

Comments: This perk may come in handy since a lot of battles feature enemy archers. You can additionally increase the effectiveness of this perk by equipping your character with a larger shield and therefore being able to stop more arrows.

Description: 50% less fire, frost and shock damage received if the attack was blocked with a shield.

Comments: This is the best perk from this entire category and it's useful during A LOT of battles, especially if you're going against monsters and enemy mages. Receiving less damage allows to easier survive on the battlefield and to approach your targets without having to worry about weak resistance to elemental damage.

Description: Ability of moving fast with a raised shield.

Comments: Despite what you might think this is a quite useful perk, because it allows you to get closer to enemy archers and mages much safer, without having to worry about receiving a lot of damage due to the fact that the main character's shield is lowered.

Comments: It's important to remember that all kinds of bashes (the ones done with a shield and the ones done with a one/two-handed weapon) count towards developing the main skill. They also stop enemy attacks, but they don't do a lot of damage on their own, so they must be followed by normal attack.

Comments: This isn't a useful perk, because even the improved counterattacks don't deal a lot of damage and their main purpose is to interfere with an enemy attack.

Description: Chance of disarming an opponent with a powerful bash.

Comments: This is an interesting perk which may come in handy during battles with enemy warriors. It's not absolutely necessary to have it, because one of the dragon shouts offers a similar result and it always ends with a success (in this case you must rely on luck).

Description: Possibility of knocking down most of the targets while running with a raised shield.

Comments: This perk works best with Block Runner which unlocks the possibility of running with a shield. As for its usefulness, you might find it very helpful while fighting larger groups of enemies in small areas.