New Main Objective: Get your orders from Ulfric Stormcloak 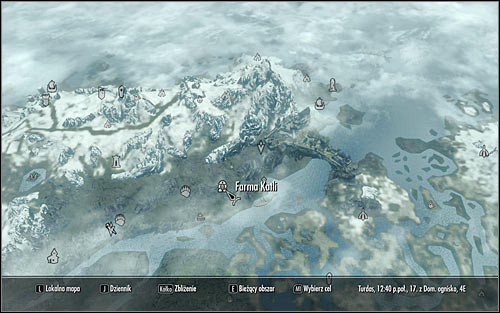 Open the world map and you'll see that Solitude has been temporarily removed from the list of available locations. Luckily, it doesn't mean that you can't use Fast Travel, because you might as well journey to one of the nearby locations, for example Katla's Farm (the above screen) or East Empire Company Warehouse. If you don't want to use Fast Travel at all, head east and keep to the hard-surfaced path. 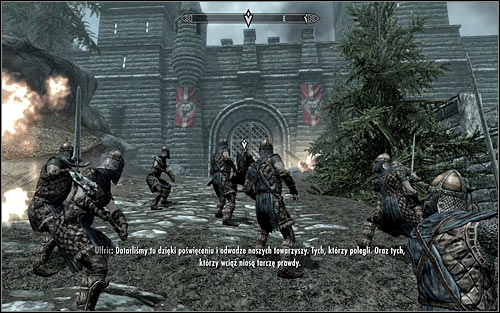 When you get there, go up the main road leading to Solitude's main gate. After a while, you'll spot Ulfric Stormcloak and have to wait until he finishes his speech (the above screen), encouraging his men to fight. Save the game here and only then approach the large gate to commence the attack on the city. 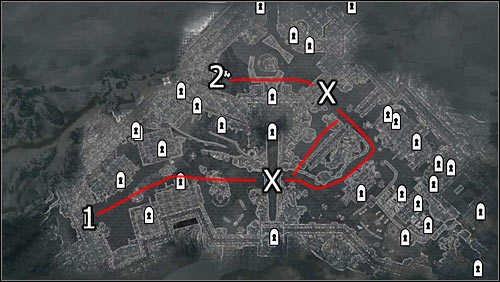 For starters, a few words on the fights you're about to take part in. This battle is quite similar to the Battle for Whiterun at the beginning of the Stormcloaks campaign. Your destination is Castle Dour, the stronghold of General Tullius and other important persons of the Imperial Legion, and just as before, you won't be able to reach the destination points by going in a straight line. The way to the castle is blocked by a portcullis which will force you to go around.

Remember that you don't have to eliminate all Imperial soldiers on the way, because both fighting parties will be replacing their dead warriors pretty regularly. I suggest focusing only on those that are a direct threat to you or that stand in your way to other parts of the city. Similarly to other battles, remember not to use area-effect attacks and always pay attention to who you're attacking, because it's difficult to distinguish between the Stormcloaks and the Imperials in the middle of the fighting. 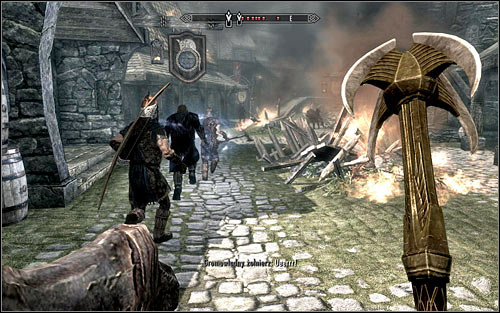 The battle begins as soon as you enter the city (the above screen). If your character prefers close combat, you can start killing the Imperial Legion soldiers right away. If you prefer ranged combat, you need to get far away from the gate quickly and find a good spot to attack efficiently. 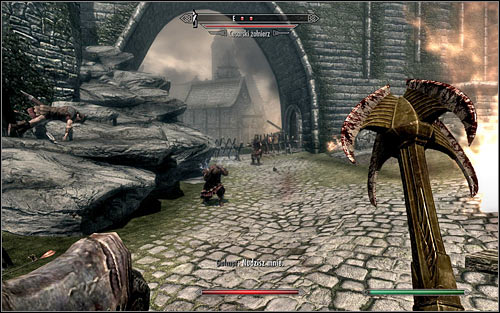 Head east. Depending on preferences, stay close either to Ulfric or Galmar, or split and fight on your own. Ignore the route that leads to the city's upper level, because there is a portcullis blocking the way to Castle Dour. Instead, head for the barricade ahead (the above screen). Depending on your chosen playing style, you can break through it yourself or wait for your allies to do it. 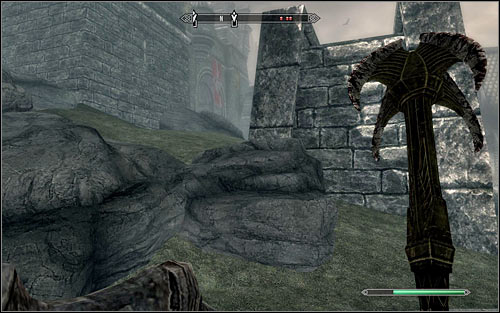 When you get past the barricade, you can decide whether you want to stay on the main road or climb the rocks to the left (the above screen) to take a shortcut. In both cases, Imperial soldiers will be regularly running out of nearby buildings. 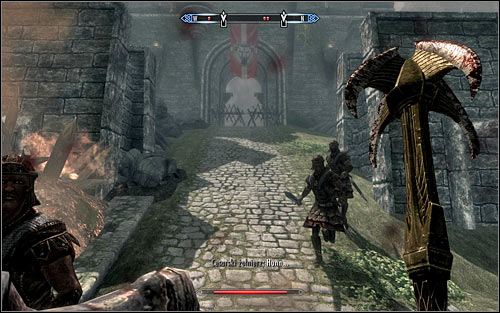 Turn northwest when you reach one the main streets of Solitude, and head toward the second barricace, set by the entrance to Castle Dour (the above screen). Once again, decide how you want to deal with it. 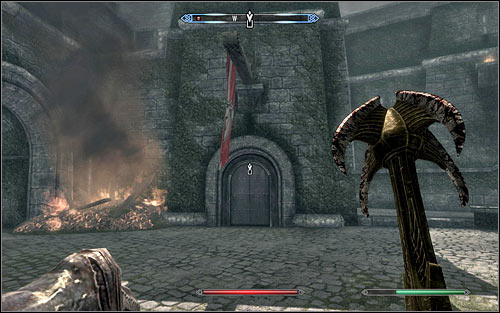 New Legionnaires are waiting in the castle courtyard, and you can take care of them or run to the north door (the above screen) leading inside Castle Dour right away. Note - Before you get inside, make sure you save the game, because in a few moments you'll be meeting the leader of the Imperial Legion. 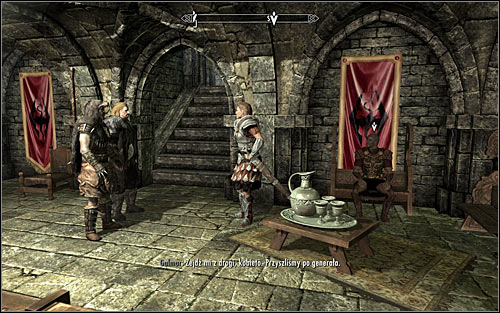 Enter the small war room and stop before Legate Rikke and General Tullius (the above screen). Don't attack the general yet, but wait until his conversation with Ulfric is over. Of course, the conversation won't do any good, and as result the fight begins. 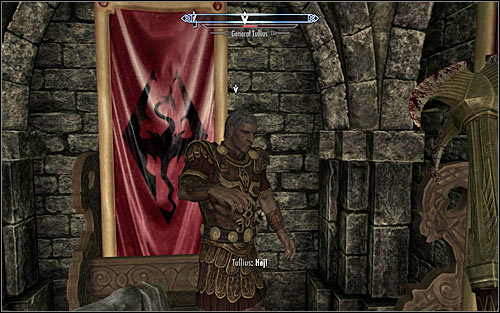 As soon as the fight starts, I suggest attacking General Tullius (the above screen). He won't die at once, but he's a fairly weak opponent so you can exclude him from the fight easily (when his health bar is diminished, he should kneel). 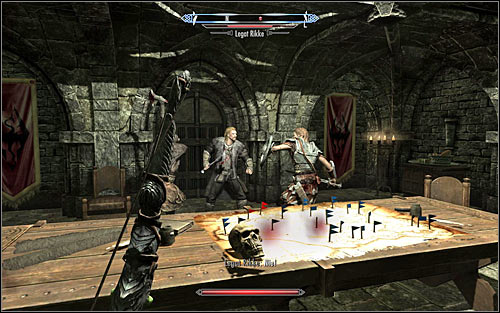 Now it's time to focus on Legate Rikke. She's a highly trained warrior, so watch out for her powerful strikes, even if you're playing a character of a similar class. Nevertheless, if your character attacks from a distance and is poorly armored, try running around the table (the above screen) so as not to let her near you. 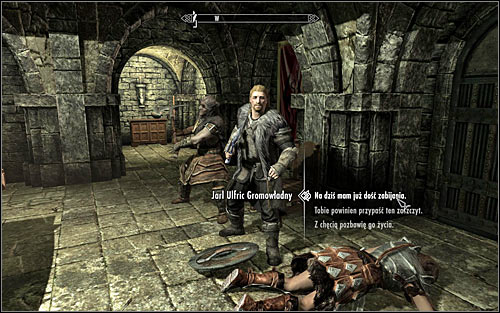 After the fight, listen to another conversation and wait until Ulfric Stormcloak approaches you (the above screen). You need to decide whether you want to finish General Tullius off yourself, or let the Stormcloak leader perform this duty. 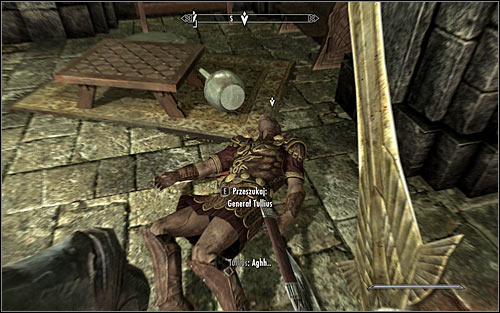 I recommend killing Tullius yourself, because then Ulfric will give you his priced Sword. To execute the Imperial Legion leader, you can use either Ulfric's weapon (the above screen) or your own. You can find the summary of the Stormcloak Rebellion Quests in the description of Liberation of Skyrim (main objective: Report to Ulfric Stormcloak #5).