New Main Objective: Get your orders from Galmar Stone-Fist 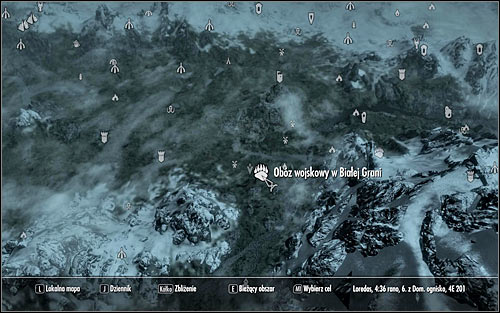 Open the world map. Your destination is the Whiterun Military Camp (the above screen); notice, though, that Whiterun itself has been temporarily removed from the map. As a result, I suggest going to any location near the city (for example, Pelagia Farm) and marching to the Stormcloak camp from there. 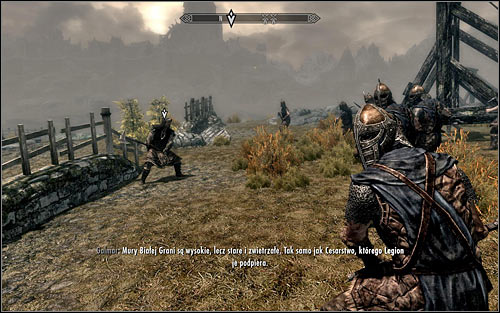 You can easily spot the place you're looking for thanks to the presence of catapults firing at Whiterun. When you get there, listen to Galmar Stone-Fist's speech and save the game at once, because in a moment you'll participate in a two-part battle to take over Whiterun. 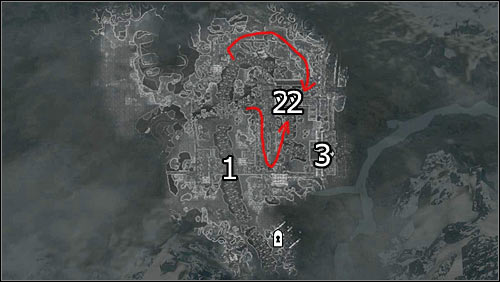 For starters, a few words on the principles of this battle. The primary goal of the first battle in Whiterun is to gain the Stormcloaks access to the city. The attack will come from the south, where the Whiterun Stables are. You'll have to break through a barricade and then lower the drawbridge that separates the entrance to Whiterun from the main city gate.

You'll have enemy soldiers standing in your way, but you won't have to eliminate them all, especially since the dead ones will in time be replaced by new ones. Don't worry about your allies, because even if they die, you won't fail the mission. What's more, if you linger too long before getting to the drawbridge mechanism, someone else might get there before you. Remember not to hit your allies, even if only by accident or by using an area-effect attack or spell. Pay very close attention to who is who, as the enemy forces comprise not only of Whiterun soldiers, but also the forces of the Imperial Legion summoned by Jarl Balgruuf. 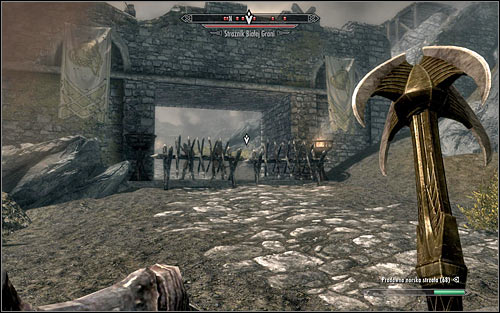 Follow the Stormcloaks, heading north, towards the first barricade enemy forces set on the only road into the city. If your character prefers close combat, try to break through it as quickly as you can (the above screen), making a way in for your allies. 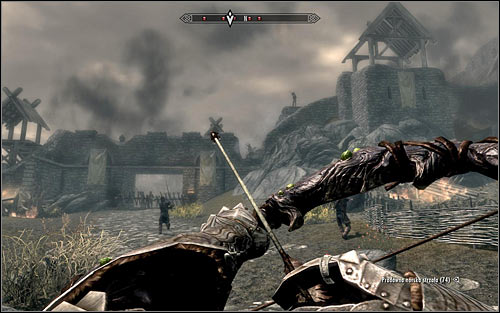 If you prefer ranged combat, I don't recommend approaching the barricade, but eliminating enemy archers from a safe distance (the above screen), counting on one of the Stormcloaks to break through the barricade. You can also go around the barricade by jumping on the rocks on the left, and from them on a wall further up. 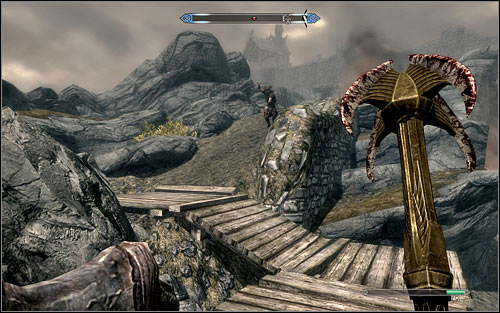 You can now focus on the main goal of the first battle, which is to open the drawbridge to the west. Don't' stay on the city main road, but use one of the less obvious paths. The first option is the path to the north; use it and you'll find yourself near a guard tower (the above screen). Turn west and then south, to the bridge. 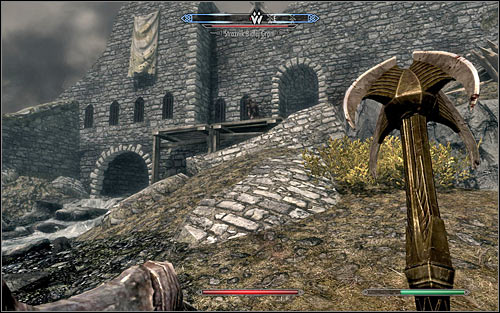 The second option is to climb the east wall (the above screen) and jump over the rocks. When you reach a wooden ramp, turn right and use the south stairs. Upstairs, turn left and you should be on the other side of the drawbridge. 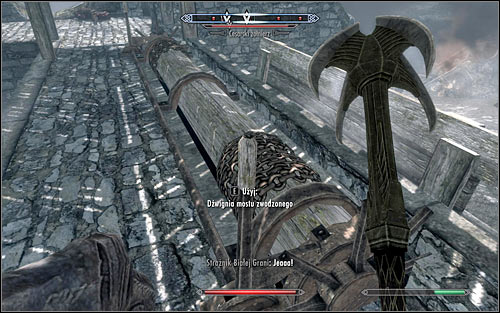 In both cases you need take into consideration the fact that enemy soldiers will be trying to stop you from getting to the drawbridge mechanism. Take out only those who stand in your way directly, because dead soldiers will be replaced by new ones anyway. Go to the marked location and interact with any of the drawbridge levers (the above screen). 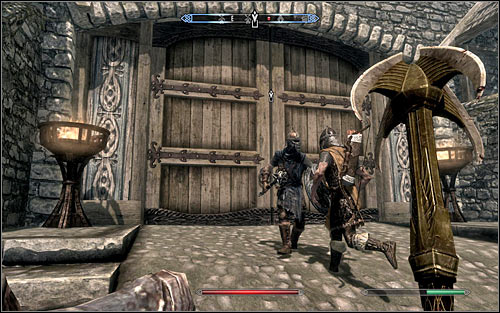 Depending on preferences, you can wait for the other Stormcloak soldiers to arrive, or head directly towards the Whiterun main gate (the above screen). In the meantime, the defending soldiers have come back to the city, but you don't have to attack them anymore. Once you're inside the besieged city, save the game before the second part of this quest. 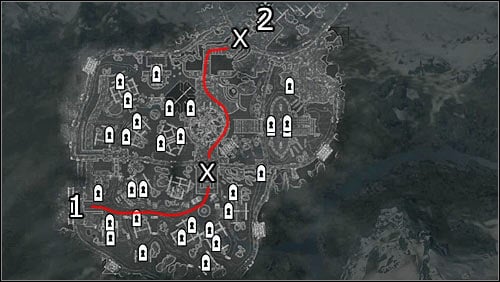 This battle also requires a commentary. Your destination is of course Dragonsreach, the stronghold of Jarl Balgruuf; the game won't allow you to get there using the shortest way possible, but will force you to take a predetermined and quite a linear path.

It's important to know that you don't have to eliminate all enemy soldiers on the way, because both fighting parties will be replacing their dead warriors pretty regularly. I suggest focusing only on killing those that are a direct threat to you or that stand in your way to the other parts of the city. As with the previous battles, remember not to use area-effect attacks and always pay attention to who you're attacking, because it's difficult to distinguish between the Stormcloaks, the Imperials and the Whiterun guards in the middle of the fighting. 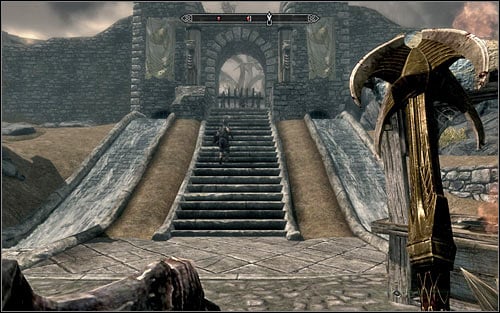 Go west, because the first of the paths leading north is blocked. You need to get to a small market and turn north from there (the above screen). If your character prefers close combat, break through the barricade. Otherwise, wait, though it may take a while before your allies do it for you. 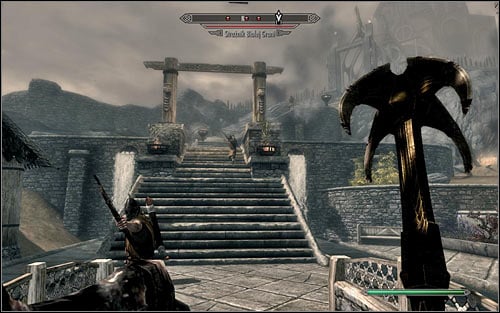 You should now be on the city's familiar biggest square. You don't need to visit or secure the nearby buildings, though enemy soldiers may be lurking in some of them. Sooner or later you'll need to use the north stairs leading to Dragonsreach (the above screen). 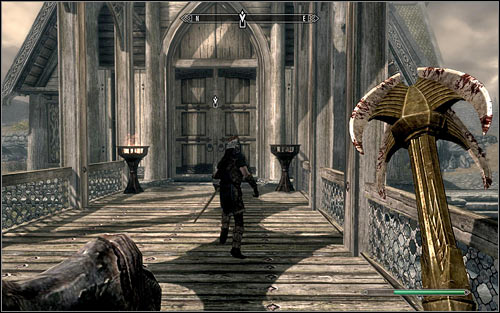 Keep eliminating enemy soldiers in your way, and use the same tactic as to the new barricade, that is break through it yourself, or wait until your allies do it for you. Soon, you should reach the Dragonsreach entrance (the above screen); save the game for the last time, because there is more fighting inside the Jarl's keep. 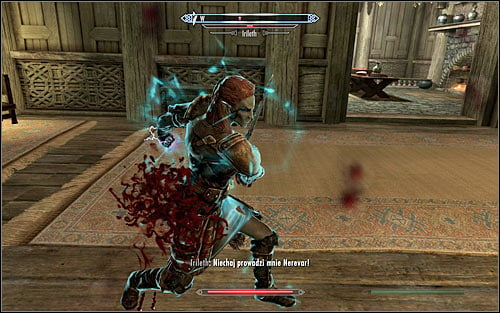 First, take care of the Jarl's Guards running to meet you. Afterwards, approach the central part of the throne room to provoke the others to attack. Be cautious, especially of Ireleth (the above screen), because she can use powerful spells. 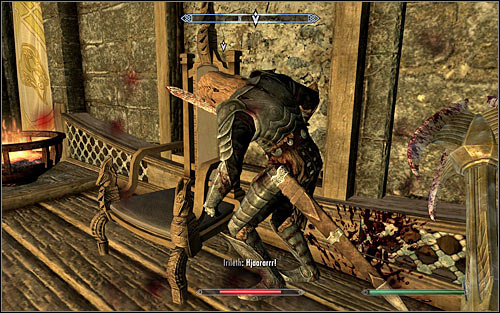 Personally, I recommend focusing strictly on attacking Jarl Balgruuf the Greater (the above screen). This is because defeating him will end the battle quicker, and you won't have to get rid of the other foes in the hall. The Jarl is a warrior so remember to adjust your tactic to his; and if your character doesn't like fighting in close combat, attack him from a distance without letting him get closer. 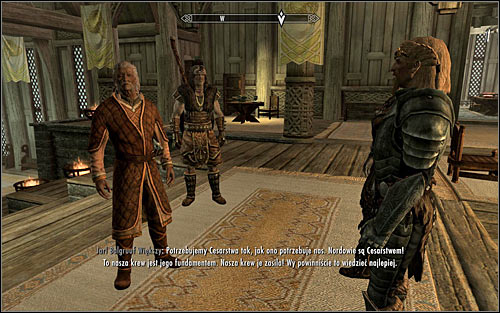 You don't have to do anything in particular here. Listen to the conversation of the defeated Jarl Balgruuf with the Stormcloaks who gathered here; aside form the ones you've met before, they are also represented by Vignar. At the very end, Galmar approaches you, asking to take the news to Ulfric. Note - don't worry that Whiterun is currently in ruins, because you haven't blocked the possibility of doing other quests associated with this location. Return to Whiterun after a few days, and it should be rebuild and the streets filled with citizens again.