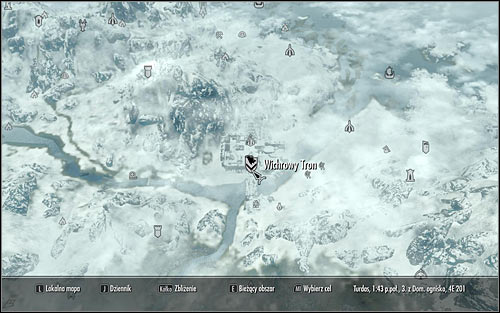 Open the world map and plan a journey to Windhelm located in the west part of Skyrim (the above screen). The easiest way is of course to use the Fast Travel option, but if you haven't unlocked this location before, try using a wagon, for example the one the Whiterun Stables. If this is your first visit in Windhelm, you'll witness a rough exchange between Stormcloak soldiers and an Elven woman, who is apparently not welcome in the city. When it's over, you can talk to her, but it's not required and won't have an affect on future events. 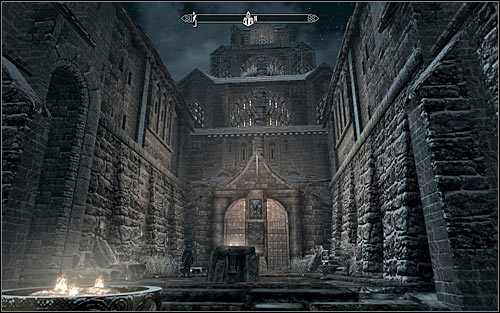 Go to the north part of the city and locate the entrance the Palace of the Kings (the above screen). Assuming you've been to the Stormcloaks stronghold before, you can travel there directly. 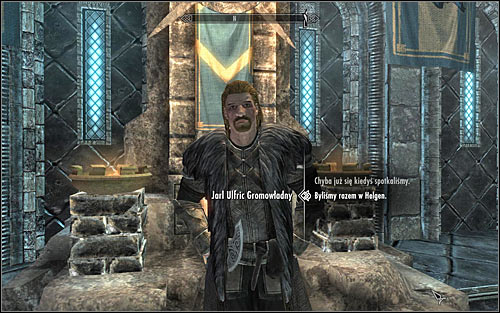 Go to the north part of the palace's main hall. You can find Ulfric Stormcloak sitting on a throne or having a war council in the "war room", talking about further plans and the doings of the rival faction. Talk to Ulfric (the above screen). If you worked with Ralof at the beginning of the game, you can mention it now, but it won't affect the outcome of this conversation. Ulfric says that the Stormcloaks are always on the lookout for people who can fight and sends you to his second-in-command, Galmar. 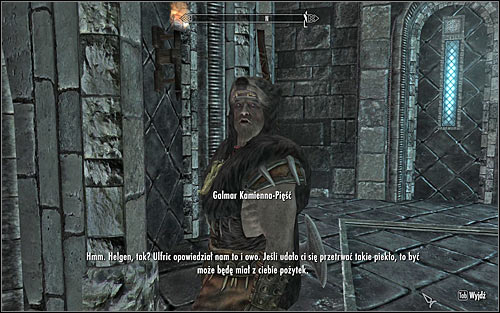 Galmar Stone-Fist should also be in the palace (the above screen) and you need to talk to him. The old warrior wants to know why you wish to fight for Skyrim alongside the Stormcloaks, but whatever you tell him won't affect your future relations. At the end Galmar tells you of your test. You need to go a completely isolated island and fight an Ice Wraith. To make it easier for you, he gives you a Resist Frost Potion and a couple of Ice Wraith Bane potions. 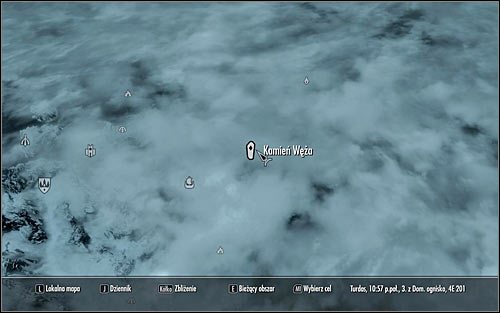 Leave the Palace of the Kings and open the world map. Your destination is the Serpentstone Island (the above screen), located in the northwest corner of the map. It's best to travel there from Winterhold, which lies in the same part of Skyrim, but if you haven't unlocked it before, you can use a wagon, for example the one in Windhelm Stables. 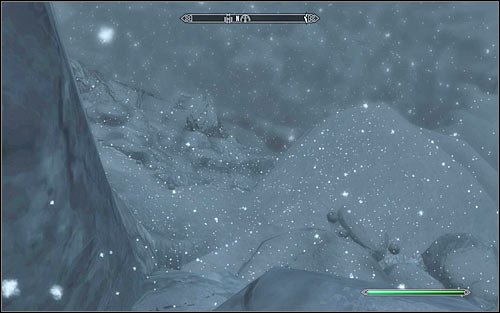 From Winterhold, head east, but be careful because you need to go down a hill the city stands on. I suggest finding a gentler slope (the above screen) which will safely lead you to the coastline. 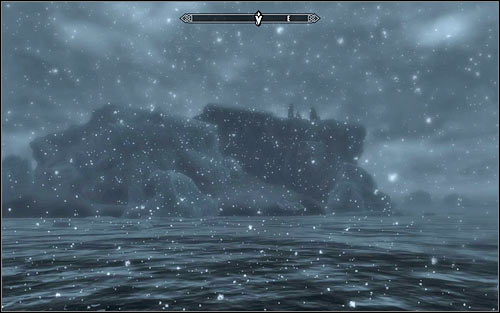 Keep going east, omitting smaller islands, swimming if necessary, and watching out for wild animals, especially wolves and bears. Your destination is a fairly small island (the above screen). It has a very steep slope on its west side, so I suggest getting there from the south. 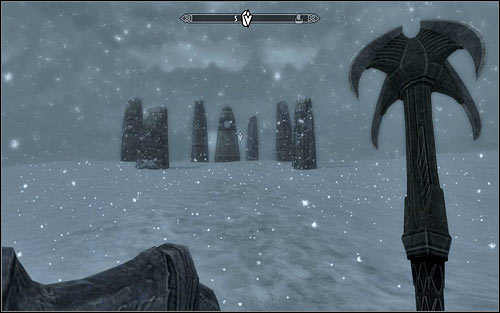 Use one of the paths leading to the highest point of the island. Go to the marked location and save the game, because once you approach the Guardian Stones (the above screen) you'll be attacked by the Ice Wraith. 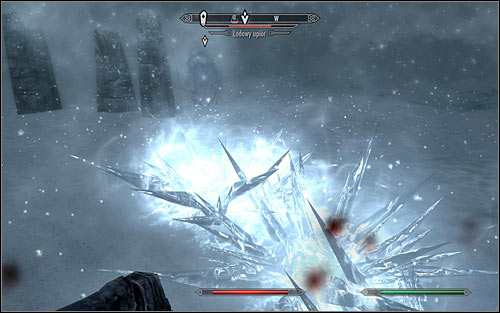 If your character prefers close combat, consider poisoning your weapon with the recently received Ice Wraith Bane, so you can hit the monster with much greater damage (the above screen); this way it will only take a few successful blows to kill it. 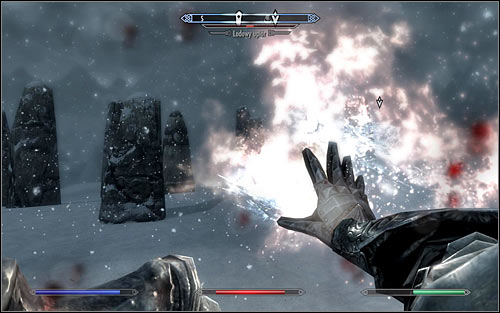 If your character prefers ranged combat, poison the weapon with Ice Wraith Bane as well. If your character is partial to magic, try using fire-based spells (the above screen). No matter the tactic, it's good to drink the Resist Frost potion before the fight to lessen the damage dealt by the monster. Once you win, examine the monster's remains because there is a high chance of acquiring some valuable potion. 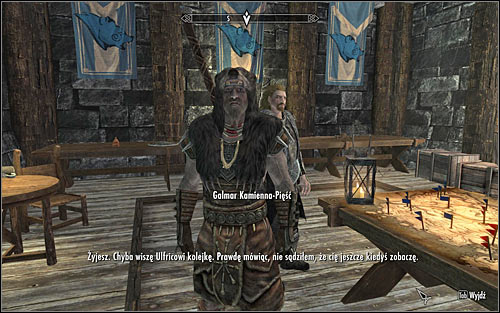 Open the world map and go to the Palace of the Kings in Windhelm. You can listen to a new conversation or talk to Galmar to inform him that you got rid of the Ice Wraith (the above screen). The warrior is impressed with your achievement and proposes that you take an oath binding you with the Stormcloak Rebellion. Note - taking the oath is not tantamount to allying yourself with the Stormcloaks irreversibly; you will still have some time to change your ally. 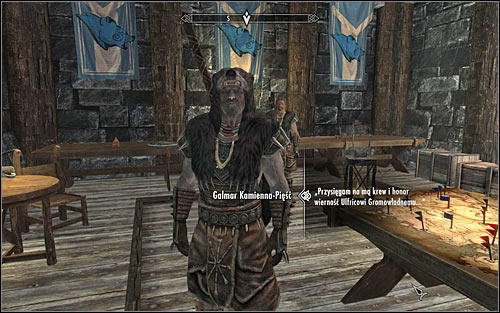 This objective is very easy to complete. Continue talking to Galmar Stone-Fist, agreeing to taking the oath. Repeat parts of the oath after him (the above screen), clicking one by one on the only lines available. Afterwards, you'll be officially welcomed into the Stormcloaks. Galmar also gives you complete Stormcloak attire, which comprises of Fur Boots, Stormcloak Cuirass, Footwraps and Hide Helmet. Unfortunately, these items are not too valuable, so probably you already have a better equipment. To activate another Stormcloak quest you don't have to end the conversation with Galmar, as he's the one who gives it to you.